Let’s face it folks, audio jacks are going the way of the dodo but we’ve fortunately reached that point in time where wireless headphones and earbuds are just hitting that sweet spot in terms of performance and affordability. This, the Edifier TWS1 True Wireless Earbuds aims to get your listening in sans wires without costing an arm and a leg. 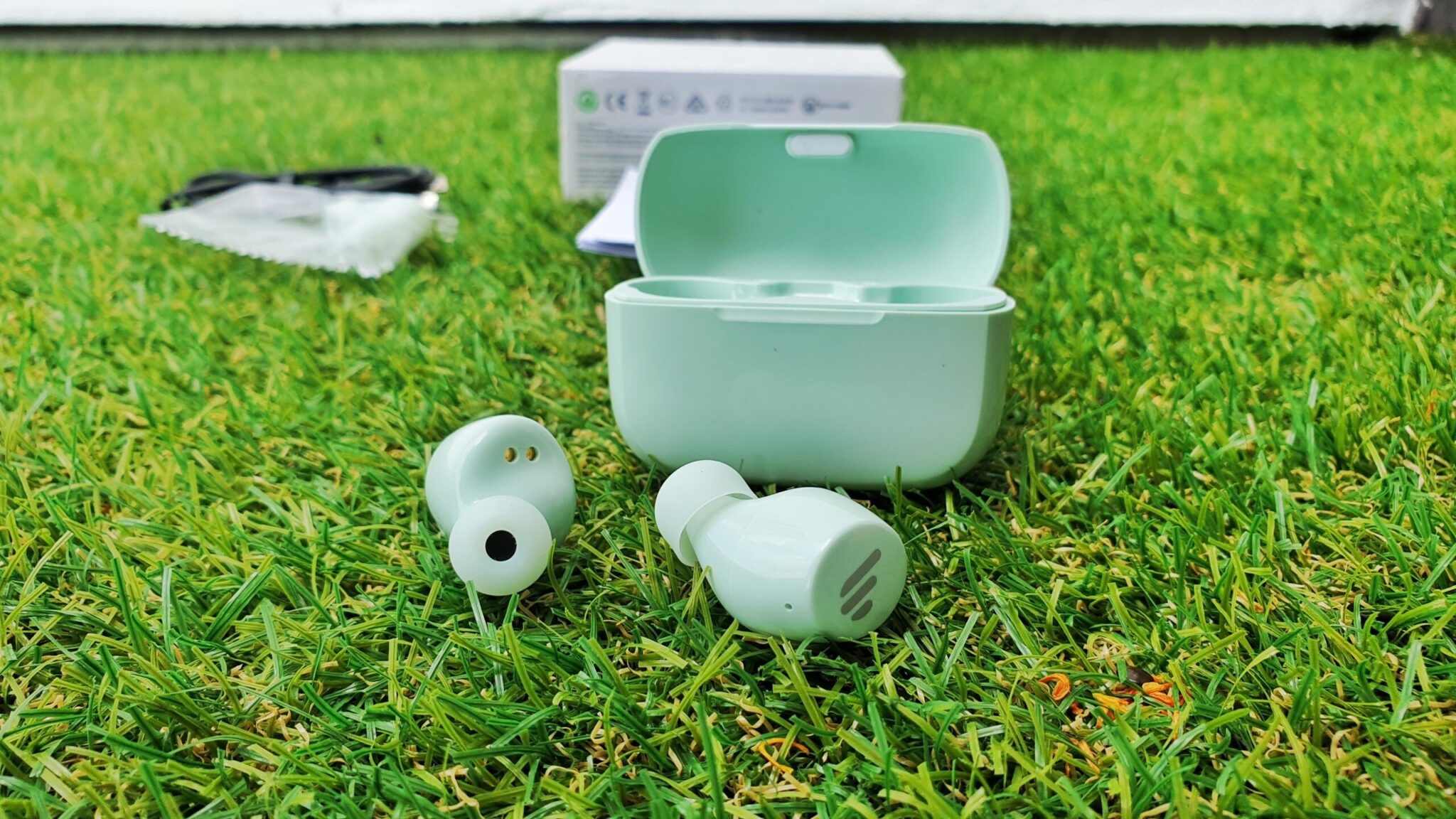 Externally, the Edifier TWS1 True Wireless Bluetooth earbuds come in a variety of colours including the obligatory shades of black and white though ours came in a rather unusual mint green hue. Rather than the toothbrush-style form factor adopted by Apple, the TWS1 instead goes for the chunkier design preferred by the likes of Samsung, Sony and, of late, Xiaomi. 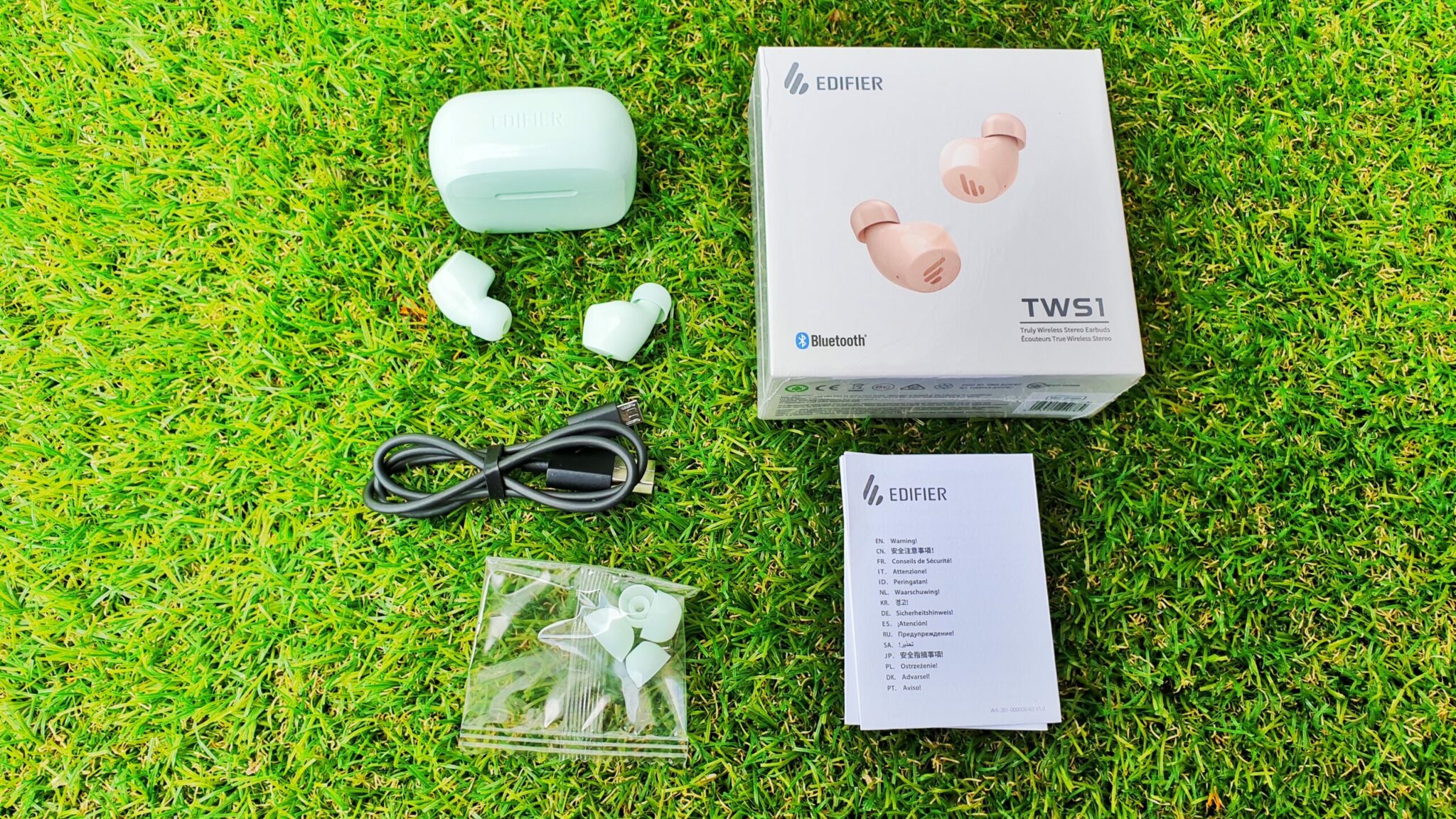 In terms of contents, the packaging for the Edifier TWS1 comes with the wireless headphones themselves and the charging case inset in a plastic tray as well as a short length of micro USB cable to charge the headphones. There’s also two pairs of differently sized eartips to offer a better fit. 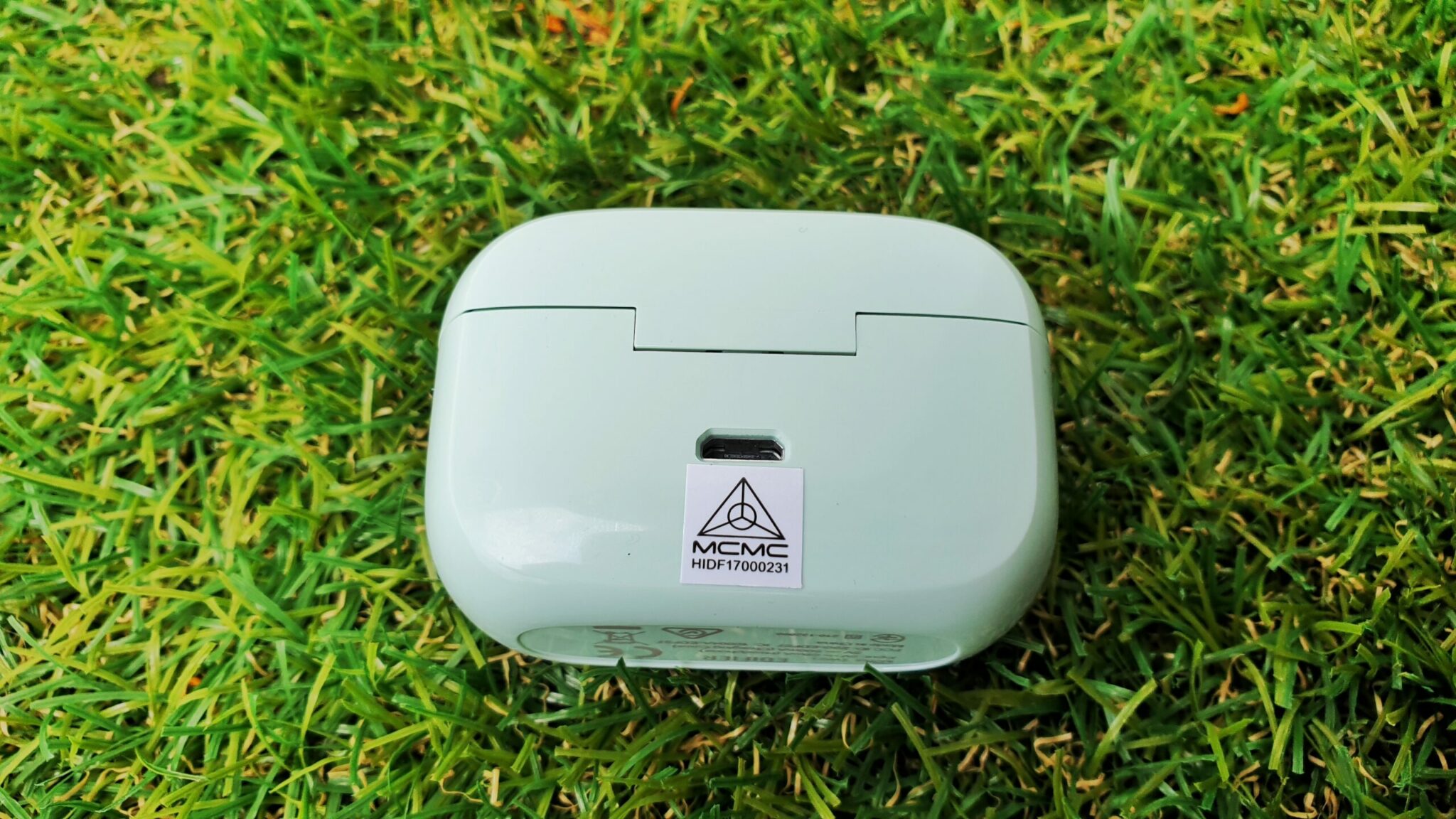 The external charging case has a smooth curved lozenge shape that doubles as a storage compartment for both earbuds. Flip the lid open, pair it up with your phone and you’re in business.

Build quality is sturdy for the charging case and earbuds of the TWS1 though it feels somewhat plasticky on account of being built primarily of polycarbonate. The back end of the charging case has a small microUSB port to charge the earbuds and the phone itself. The lid itself has a small magnetic latch that securely keeps it closed unless you need to use it and is smooth enough that you can open it one-handed though we advise against using it in the manner of a Zippo lighter as the hinge mechanism isn’t as robustly constructed for hard use and flip tricks.

When charging the TWS1, a tiny red LED lights up near the front of the case to give an indication how far along the process is and will turn off once its fully juiced though it takes about 1.5 hours for a full charge. It’s somewhat unintuitive but the number of blinks gives an idea how fully charged it is with a single blink showing about a 33% charge, two rapid blinks about 55% and three blinks showing that it is near full charge.

Each of the TWS1 earbuds come in the same colour as the charging case and proved to be relatively comfortable with the default pair of eartips though it comes with a smaller and larger pair of eartips s if the standard size doesn’t quite fit. Of note is that the earbuds are IPX5 rated so they’ll survive the rain shower and a sweat making them an option for outdoors use.

Each earbud comes with an 8mm neodymium driver, a small built-in battery and a touch control panel that lets you make and take calls. On the connectivity and codec front, the Edifier TWS1 is surprisingly well equipped with Bluetooth 5.0 and the aptX wireless codec that ensures minimal audio latency for movies, gaming and music.

On paper the Edifier TWS1 offers a very generous 8 hours of battery life on a single charge while the provided charging case which has a 500mAh battery adds an additional 24 hours available for a whopping 32 hours of active run time. That’s plenty for a trans-continental flight and then some. 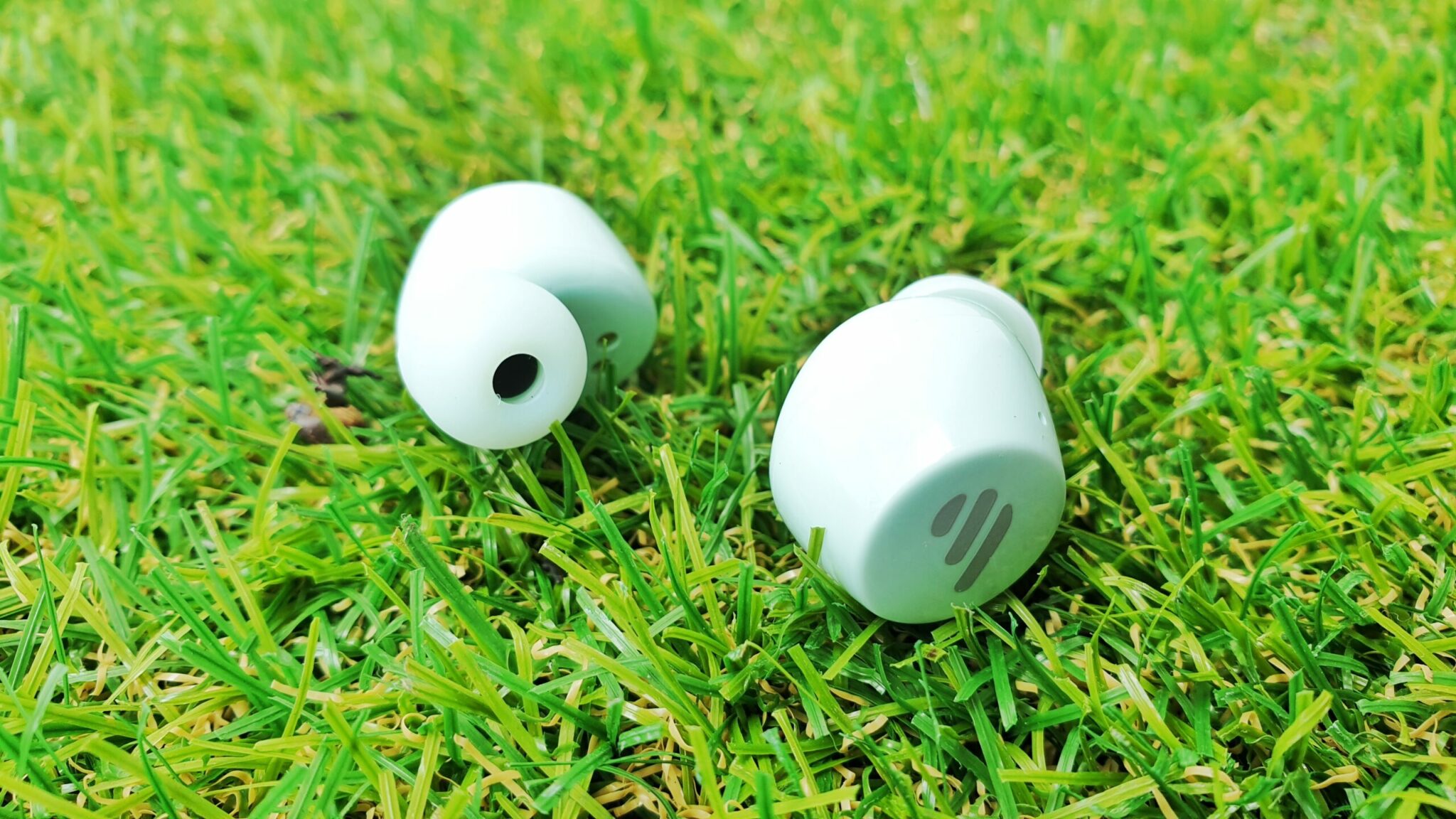 Getting it up and running is as simple as it gets and it instantly found and paired up with our Galaxy Note9 in mere seconds after we took it out of the packaging and turned on Bluetooth. Oddly enough, you can only use the left earbud if you want to use it solo; the right earbud doesn’t work on its own. It’s an odd quirk but it’s not a deal breaker by any means.

Both the left and right earbuds have the same controls with a triple click going back to the previous track, a double click to the next track and a single tap pausing the track or playing it depending on circumstances.

If there are incoming calls, you can take them with a single click or long press to cancel it. Oddly enough, there’s no way to turn it on or off – the moment you take it out of the case, it turns on and placing it back in turns it off and starts charging it. It’s a surprisingly elegant solution that works. 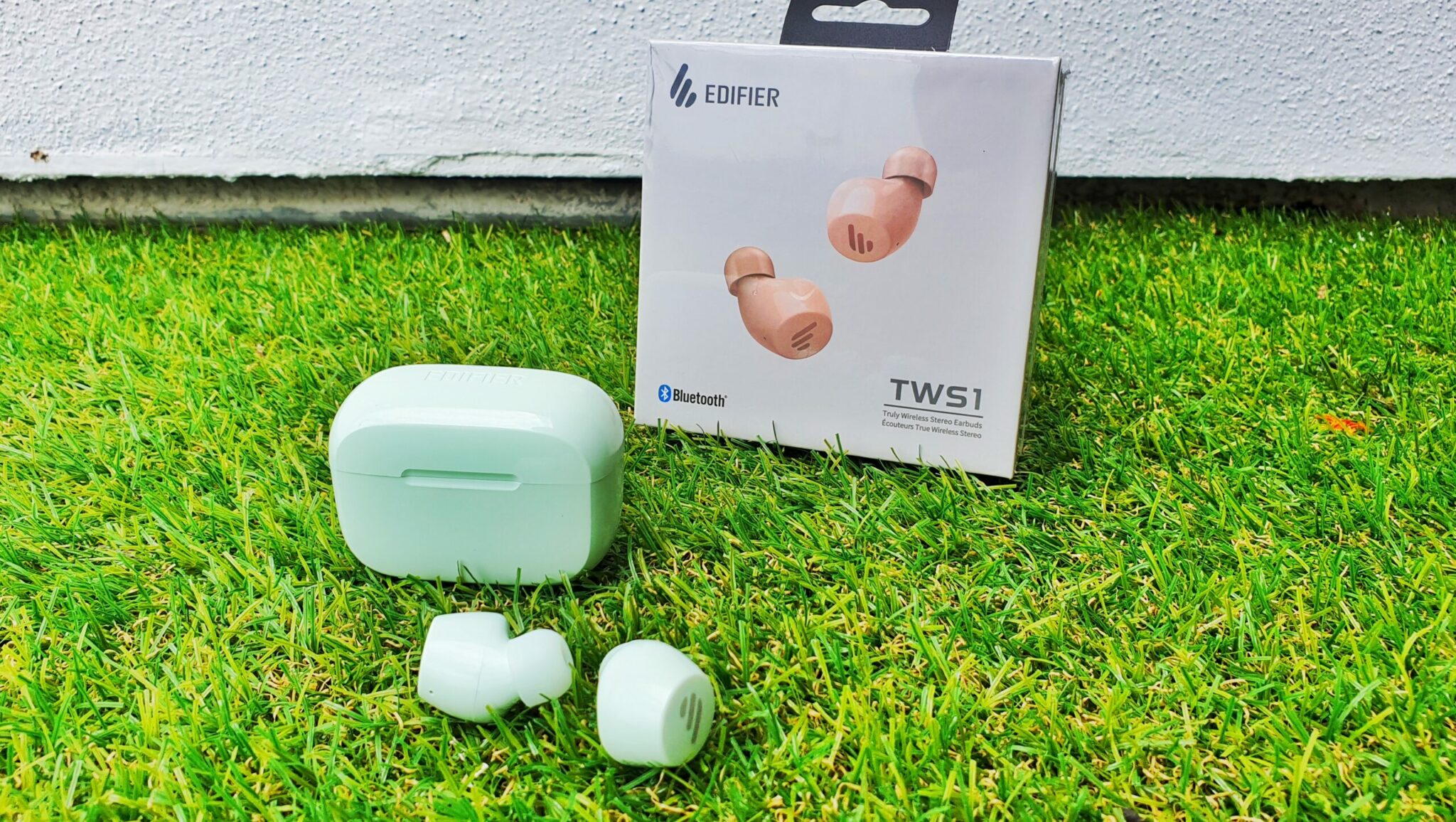 When paired up, the Edifier TWS1 punched above its weight class with some surprisingly solid, low latency audio. In Call of Duty Mobile, there was no lag and incoming as well as outgoing ordnance sounded off at the exact times they hit. When streaming movies, the audio was spot on synched to the footage onscreen.

Bass quality was fair and there’s a decent amount of detail as well as sound staging though treble seems somewhat underwhelming with subtle tracks like Pink Floyd’s ‘Time’ and Vaughan Williams’ ‘The Lark Ascending’ not rendered full justice. This kind of audio profile means that it’s more than sufficient for the usual mainstream pop and contemporary music which is understandable seeing its price point

Unfortunately you can’t tweak the settings all that much as it lacks paired app or equaliser settings; you’ll have to manually tweak it from your paired smartphone if it has any such app on hand. That aside, it has surprisingly good audio quality for what you pay for.

On paper, the Edifier TWS1 has 8 hours of battery life for the earbuds and about 24 hours or three full charge cycles in the charging case before you need a full recharge. In field testing, the Edifier TWS1 easily managed this sum and matched it with a fully charged pair lasting just nigh on eight hours before we put it back in the casing for another three additional listening cycles over the course of a week with about 4 or so hours usage per day with enough to still trundle on through our music playlist by Sunday. Fortunately, the headphones proved relatively comfortable throughout the duration of our test and we didn’t need to swap it out for the other provided eartips.

If you can live with the lack of tweakable settings and the plasticky build quality, the Edifier TWS1 True Wireless Earbuds represent excellent value for what you pay for with solid performance that belies its price point.

What we liked Splashproof IPX5 design, decent performance for price, exceptional battery life, very light
What we didn’t Limited equaliser settings, reliant on paired device for volume control, plasticky finish
We say If you can live with the lack of tweakable settings and the plasticky build quality, the Edifier TWS1 True Wireless Earbuds represent excellent value for what you pay for with solid performance that belies its price point.

If you can live with the lack of tweakable settings and the plasticky build quality, the Edifier TWS1 True Wireless Earbuds represent excellent value for what you pay for with solid performance that belies its price point.