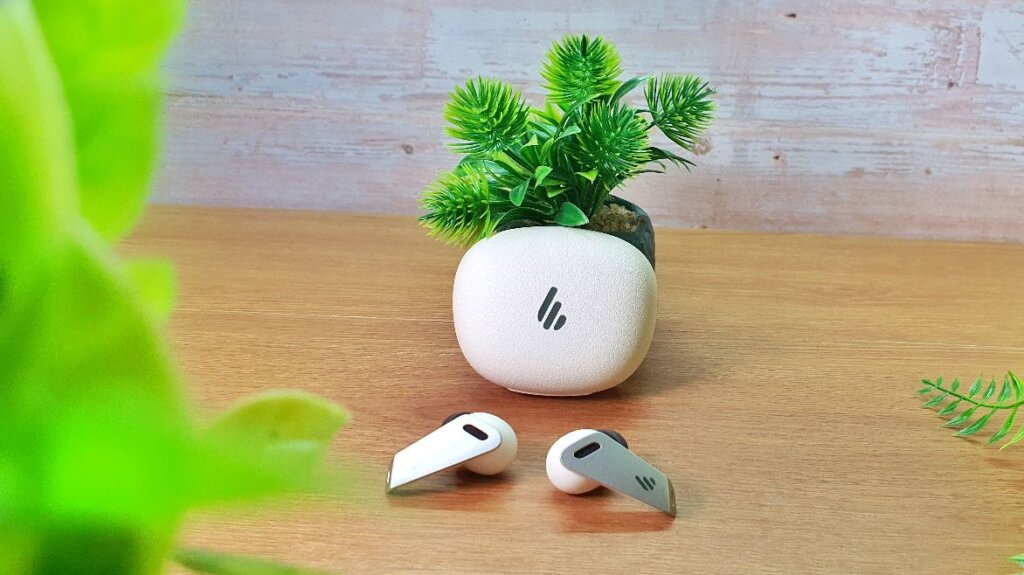 The Edifier TWS NB2 wireless earbuds look like a tempting proposition for those on the hunt for true wireless earbuds as they not only offer active noise cancellation and exceptional battery life but a surprisingly low price too at RM349. Are these the ear buds to beat for value? Check out our Edifier TWS NB2 review where we put it through its paces… 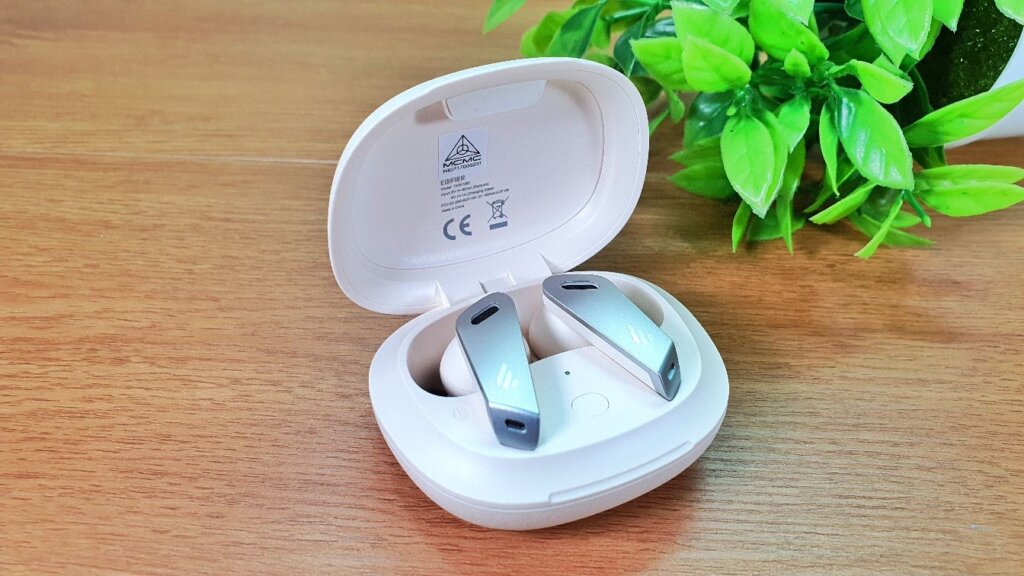 Edifier TWS NB2 – What’s in the Box and Design

The Edifier TWS NB2 comes with a fairly complete assortment of kit in a very ostentatious looking box. You get the earbuds themselves along with the charging case, the usual warranty and quick start paperwork, three differently sized pairs of eartips, a USB-C charging cable as well as a pleasant bonus – a canvas drawstring pouch to keep the TWS NB2 and its charging cable safe. 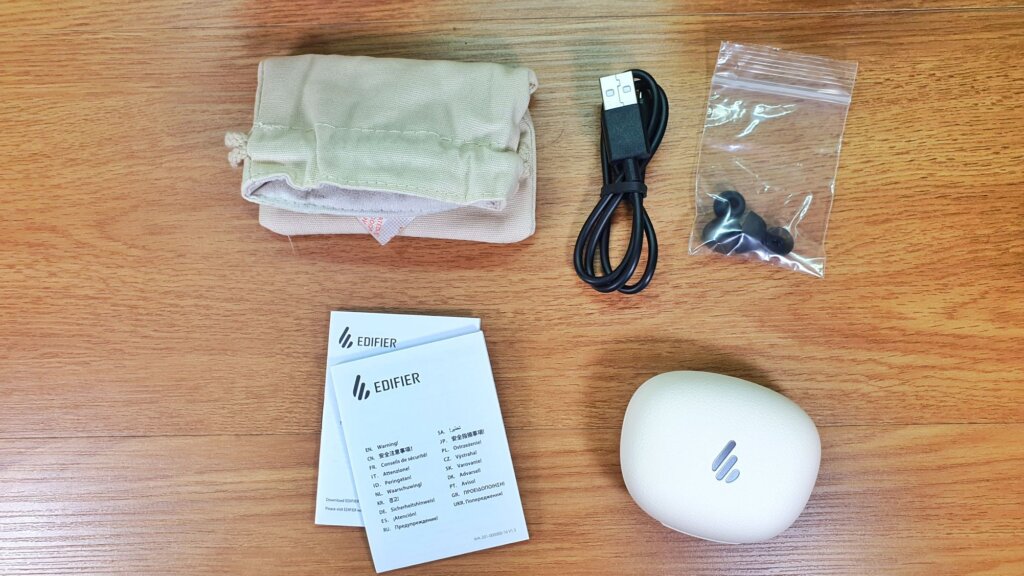 In terms of build and design, the TWS NB2 looks surprisingly good for its price point. The charging case resembles a rounded river-worn pebble that fits neatly in the palm of your hand with a textured finish that makes it easy to grip. Colours choices are either matte black or in the case of our test unit, a shade of off-white cream.

One interesting quirk of design with the charging case is that it’s somewhat hard to open one-handed. The nature of the hinge mechanism and the wide and flat nature of the case means that this is a two-handed job even for the most adroit user. Fortunately the earbuds and the case itself are held in place with magnets to prevent it from accidentally falling out.

The earbuds look rather striking when viewed head on with a unique angular stem which hides a rather bulbous speaker and battery housing that terminates in swappable soft ear-tips. In keeping with many other wireless earbuds, the TWS NB2 has touch sensitive panels finished in a faux silver finish on both earbuds. 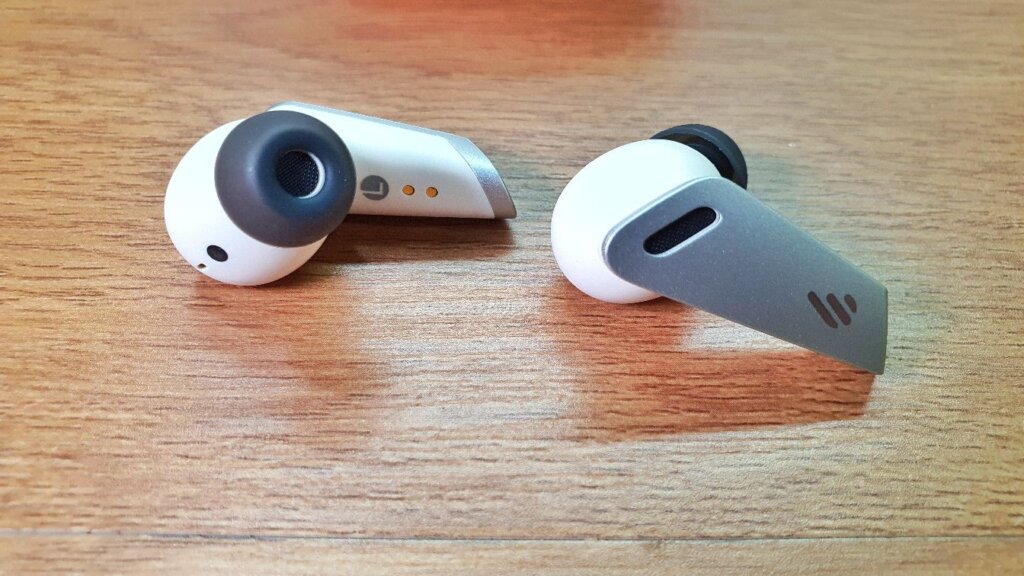 Of note is that the TWS NB2 has an IP54 water and dust resistance rating which allows it to survive sweat, dust and the odd splash or two of water without undue damage.

For what you’re paying for, the TWS NB2 looks sufficiently premium and the addition of the free drawstring pouch is a pleasant bonus.

Each earbud has a 13mm driver with graphene diaphragms.  Where many ANC equipped earbuds, especially in earlier generation offerings typically have noise cancelling mics either externally or internally, the TWS NB2 has both, with an external and internal mic for hybrid active noise cancellation. Hybrid ANC is a feature that’s typically found on vastly pricier earbuds and which is capable of offering, on paper, better noise cancellation performance. At RM349, it’s one of the cheapest ANC-enabled earbuds in the market. 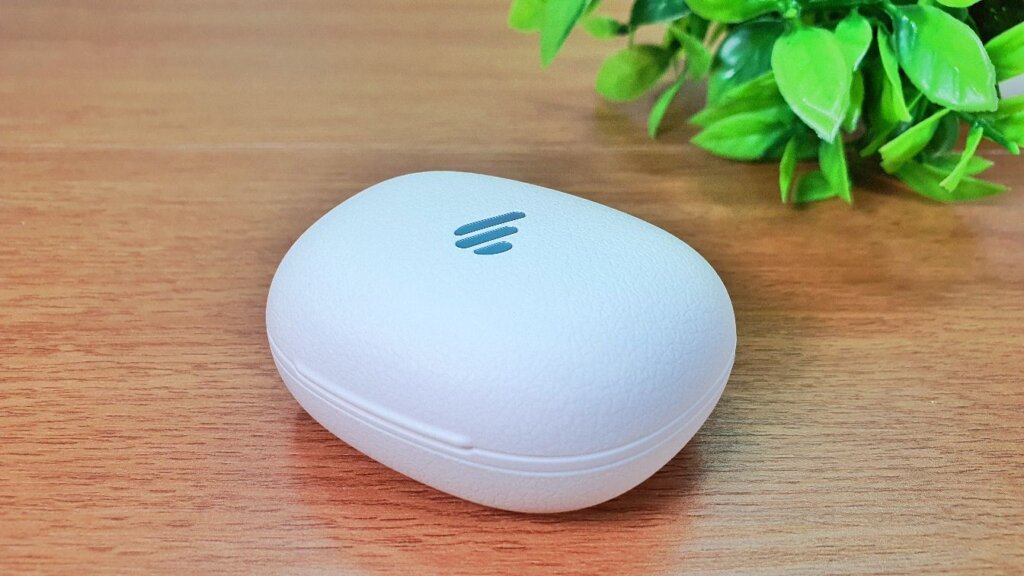 The TWS NB2 also hosts a low-latency Gaming mode that has an 80ms response time. On top of active noise cancellation mode and a Gaming mode, it also has an Awareness ambient mode that allows for critical external noises to filter in. Here’s a recap of its specifications:

Getting it up and paired with an Android phone, in this case a Galaxy S20+ was accomplished in a matter of minutes as it recognised the phone in seconds. The fit was comfortable from the start for us though you can swap out the ear tips in order to ensure a proper passive seal for your ears. Fortunately, the angular stem stretches away from the earpiece so that it doesn’t make skin contact which lends to its good degree of comfort in tandem with how light the earbuds are.

Controlling the TWS NB2 is relatively straightforward with a simple control setup accomplished via a series of taps on each earbud’s control surface. Unfortunately these controls are hardwired into the device and there’s no way to customise it.

Tapping twice on the left earbud lets you cycle through normal, Ambient and ANC mode while tapping thrice turns Gaming mode on or off.

Tapping the right earbud twice lets you play or pause tracks and answer or end calls. Tapping thrice moves forward by one track. Volume control has to be manually tackled via the phone settings.

You can also use either earbud solo though the controls aren’t remapped to factor in that you’re only using one earbud so tapping on the left earbud will still only let you have access to cycling through Normal and Ambient mode while a triple tap still turns Gaming mode on or off. Using the right earbud on its own grants slightly more utility as it lets you control track playback with the same scheme as a normal dual earbud setup.

Hopefully they allow for remappable controls in a future firmware update. Another thing to note is that the TWS NB2 doesn’t handle multipoint pairing so you’ll have to unpair and repair your earbuds when you need to listen to audio from a new piece of kit.

For a more in-depth view of the Edifier TWS NB2’s diagnostics, you can pair up the earbuds with a free app that they’ve dubbed as Edifier Connect on the Google Play store.

The app itself features a widget that hovers on your drag-down active task bar when the earbuds are in use and offers access to details about the status, remaining battery life of the TWS NB2’s earbuds and also what mode it’s in.

The widget itself offers fast access to toggle ANC, Ambient and Game mode at will. The Edifier Connect app also has the option for music playback along with options to tweak the response sensitivity of the control surface, reset to factory settings, repair the earbuds and also perform a timed shutdown. Unfortunately, the app itself lacks any means to tweak equaliser settings so you’re stuck with the stock settings.

When put through its paces, the Edifier TWS NB2 proved to be a very capable pair of wireless earbuds for what you pay for. At RM349, you’re getting a sound signature that is on the warmer side of the spectrum with an emphasis on bass and the mids which means it’s ideal for most mainstream pop music and general use.

We ran it through with Taylor Swift’s ‘Wildest Dreams’ that opens up with a boomy bass line in the track before segueing into her vocals and the track showed a fair balance without her crooning being overwhelmed by the background acoustics. 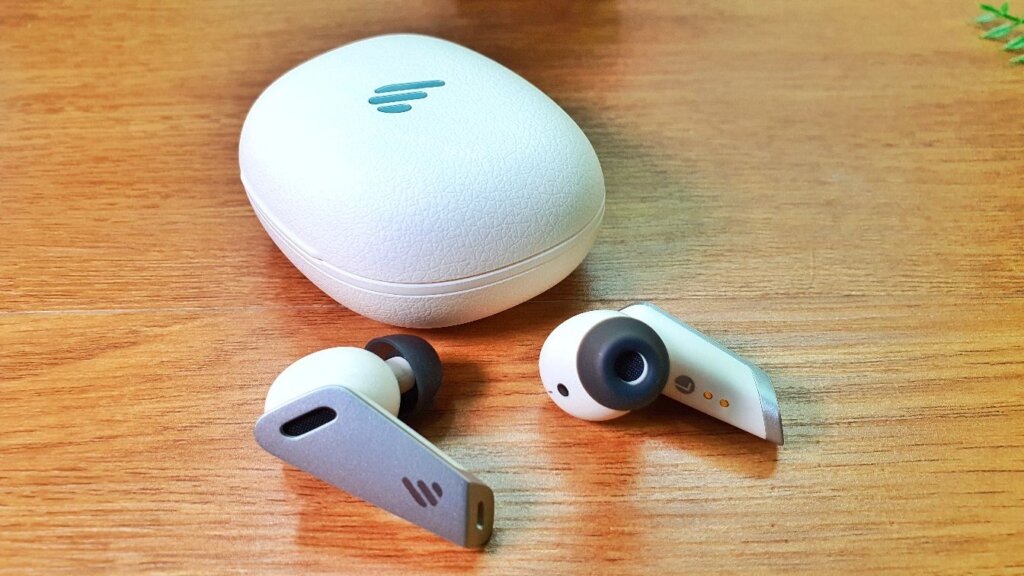 We also put it through Joanna Wang’s classic guitar solo track ‘Vincent’ which was simpler but also more challenging as the simple arrangement also means that you’ll notice if it has issues tackling vocals but the TWS NB2 managed to give her sultry vocals due justice without sounding overly bright.

We also fired up Call of Duty Mobile and turned on the earbud’s Game mode. We didn’t notice any significant latency in audio with Game mode on or off though but it’s a nice feature to have.

One particular quirk we noticed though is that the drivers aren’t too loud and even though we redlined the TWS NB2 to maximum, the volume didn’t appreciably spike to what you’d typically consider as an 8 in general for earbuds, remaining instead on the healthy side of 6. On the bright side, there’s no distortion when you crank it up to maximum.

The noise cancellation on the TWS NB2 is great for its price point with the ability to dampen most white noise though more piercing sounds like horns and sirens are still apparent. Call quality on the Edifier TWS NB2 was also good on both sides with good voice clarity.

After going through a 5 hour play session, the TWS NB2 still remained comfortable for extended use which bodes well for heavy users.

On paper, Edifier quotes the TWS NB2 having a battery life of 7 hours per charge with ANC on with an additional 18 hours of juice in the case following the same ANC-enabled listening scenario.

If you leave it off, you can stretch this to 9 hours of usage per charge with an additional 23 hours in the case for a grand total of 32 hours of listening time.

Under practical field scenarios, we managed a maximum of 6 hours and 30 minutes of usage with ANC on constantly but swapped out for Game mode when we fired up a few bouts of Call of Duty Mobile along with a few voice calls while running through our Spotify playlist.  For earbuds in its price range and with ANC, that’s pretty good battery life

As far as performance goes, the TWS NB2 punches above its weight class and can give some earbuds twice or thrice its price a run for their money.

While it won’t be able to engage pricier heavyweights head-on, you have to bear in mind that the Edifier TWS NB2 also costs much less while offering a good chunk of capabilities like hybrid ANC that you’d typically expect on pricier gear. For what you pay for, the Edifier TWS NB2 is a great performer in its price category.and an excellent pair of earbuds for general use. 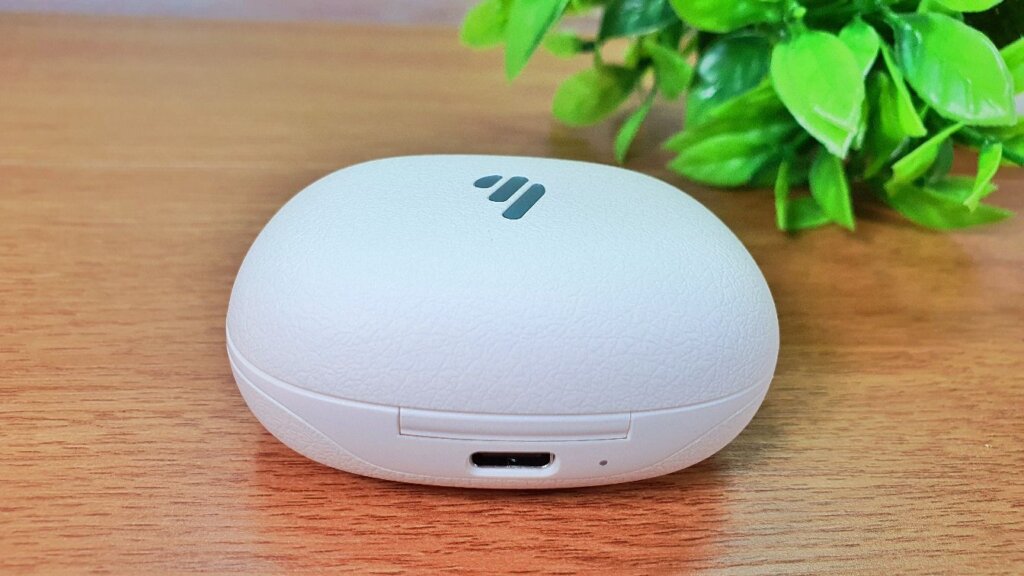 What we liked Good performance for price, earbuds can work independently of each other, light and compact

What we didn’t Drivers could be louder, no equaliser settings in Edifier Connect, no customisable controls

We say One of the most affordable true wireless earbuds available that offers active noise cancellation and good performance in equal measure at a price point below RM350.

One of the most affordable true wireless earbuds available that offers active noise cancellation and good performance in equal measure at a price point below RM350.