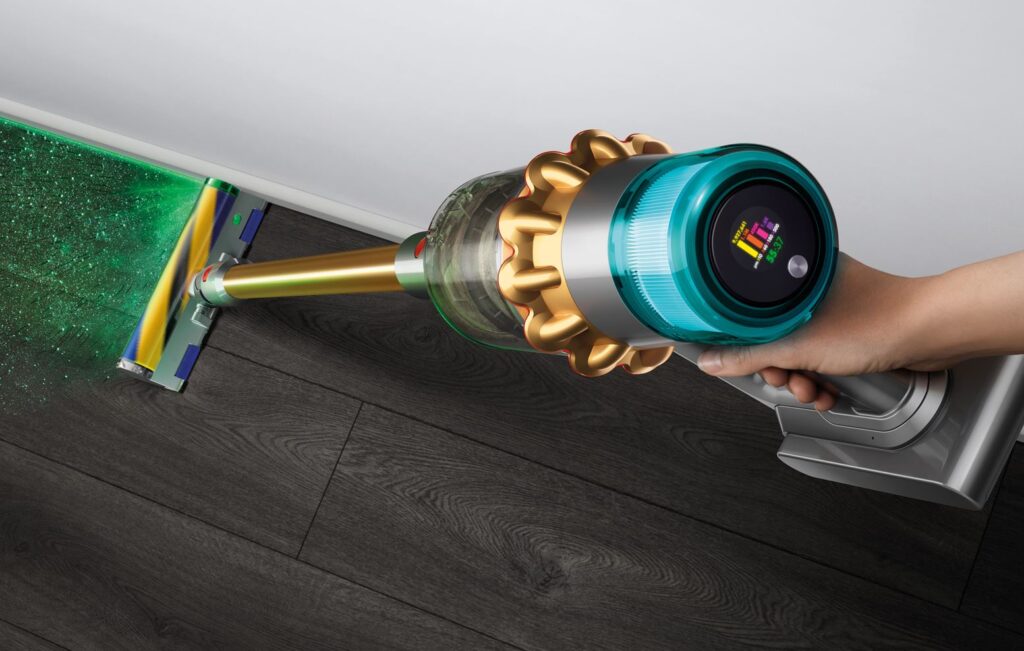 When it comes to cordless vacuums, Dyson is miles ahead of the competition with a slew of innovative designs that perform better in every way and, in keeping with the ethos of their founder Sir James Dyson, help to solve problems that others ignore. In that regard, the new Dyson V15 Detect Absolute cordless vacuum that has just arrived in Malaysia in two different variants is literally the ultimate solution to tackle dust, dirt and crud around the home in a decisive fashion. 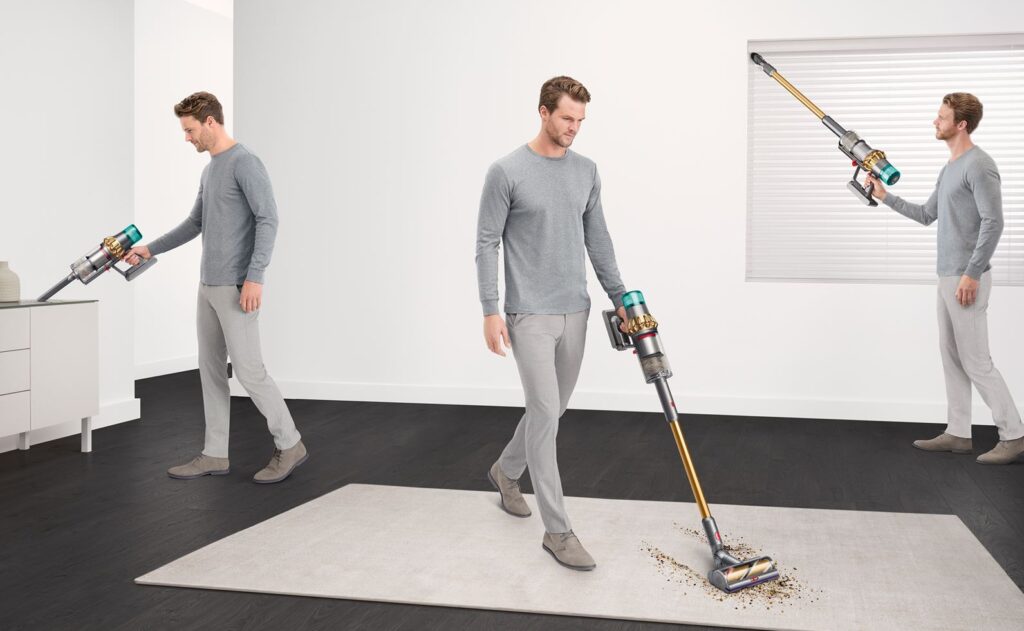 Alongside the new Dyson V15 Detect Absolute, Dyson is also releasing a new Pet Groom Tool to help with grooming pets as a separate purchasable attachment for the V15 and which is compatible with older models too including the Dyson V12 Detect Slim, Dyson Digital Slim, Dyson V11, Dyson Cyclone V10 series, Dyson V8 series and Dyson V7 series.

What is the Dyson V15 Detect Absolute vacuum

Intended as the most powerful cordless vacuum in Dyson’s line-up, the Dyson V15 Detect Absolute is intended as the successor to the older  Dyson V11 Absolute that was launched in 2019 in its role as a top of the line powerful vacuum with the best suction power and performance available in the market whereas the Dyson V12 Detect Slim is intended as an evolutionary offshoot that aims to be a lighter, more affordable system optimised for the Asia market while the older Dyson Omni-Glide and its special omnidirectional cleaner head is intended to tackle the typical hard floors in Malaysia. 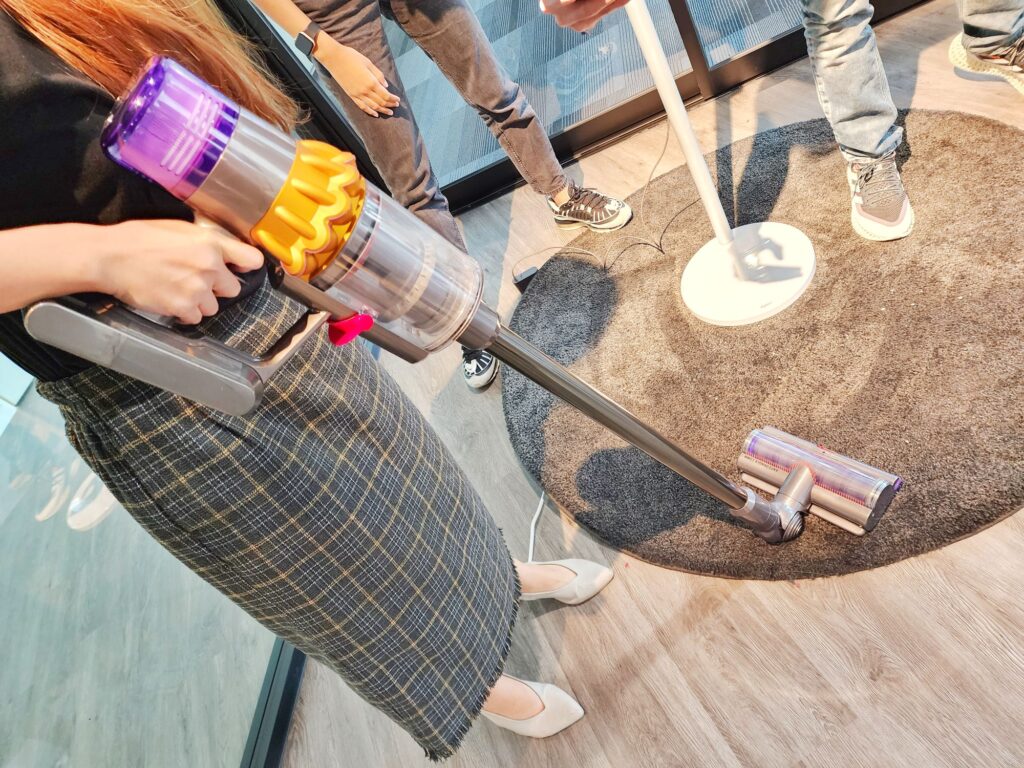 For Malaysia, Dyson is releasing the V15 in two variants with the mainstream Dyson V15 Detect Absolute and a top of the line Dyson V15 Absolute (HEPA) which has an integrated HEPA filter that can capture and filter the tiniest bits of dust and which has more useful attachments. Common to both designs is a powerful cleaner head with an eye-safe green laser that can detect nigh invisible motes of dust to truly ensure a thorough clean, hence its name.

In terms of performance, the Dyson V15 Detect Absolute hosts a hyperdymium engine which has 240AW (Air Watts) easily the higher amount of suction power currently available in a consumer vacuum. 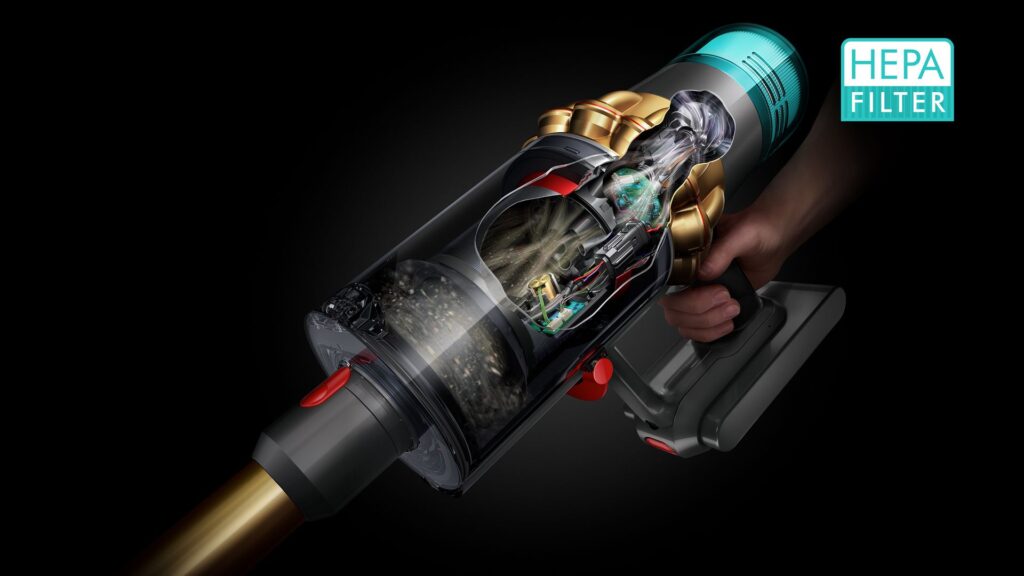 All this dust is captured in an advanced 5-stage filter that captures 99.99% of particles as small as 0.3 microns while expelling cleaner air out but in the case of the Dyson V15 Detect Absolute (HEPA), the air goes through a more robust HEPA filter that can capture ultra-fine particles down to 0.1 microns, making it one of the best filters available in a cordless vacuum. 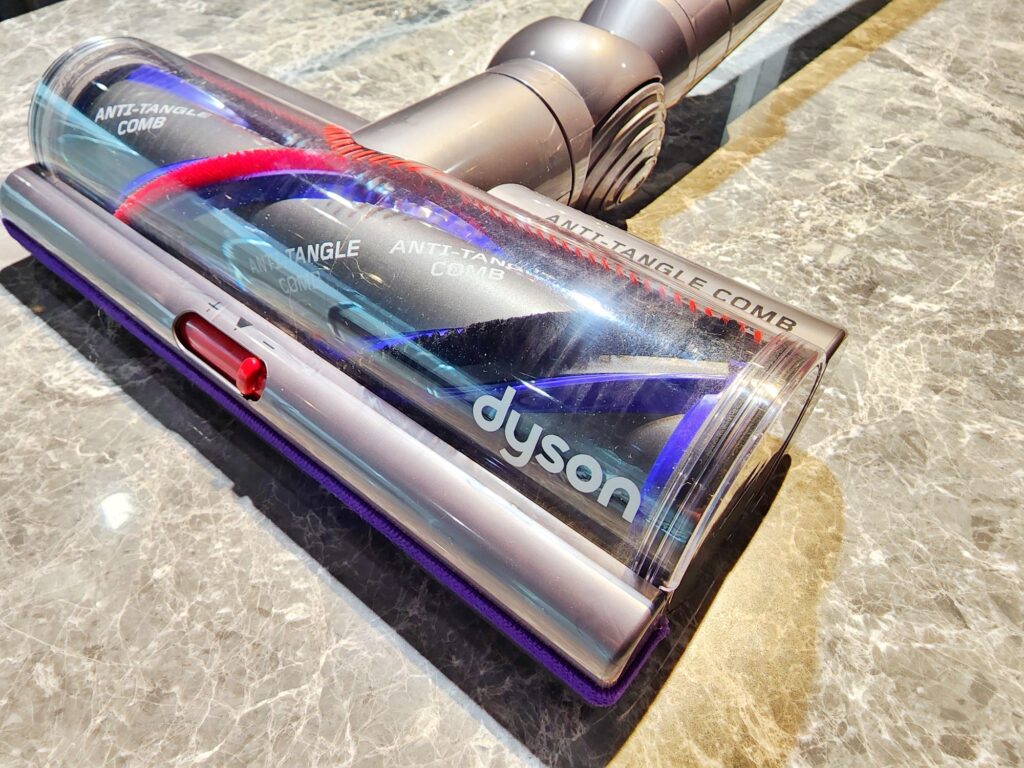 After factoring in consumer feedback, the new Dyson V15 Detect Absolute features a special motorised Digital Motorbar cleaner head that can effectively tackle one of the most common things left around our homes – hair be it human, feline or canine. While Competing designs frequently end up with long strands tangled around portions of the cleaner head, the new Digital Motorbar cleaner head has 56 special hair removal vanes spaced along its interior structure that are carefully angled to ensure hair doesn’t tangle and goes straight into the dust bin for disposal.

The design also has a piezoelectric sensor that can actually measure the size of the dust you suck up during a cleaning session to show that you’ve indeed undertaken a deep clean.

Aesthetically speaking, both the Dyson V11 and Dyson V15 Detect Absolute have a similar inline layout with a pistol-style trigger guard, a forward mounted dust bin and an underslung battery pack but where both differ is that the latter has way more suction power, features and versatility.

Straight off the bat, the Dyson V15 Detect Absolute has a more powerful Dyson Hyperdymium 240AW (Air Watts) motor versus its predecessor’s 185AW motor. On top of more suction power, the new Dyson V15 Detect Absolute also has a rear LCD display that, combined with special piezoelectric sensors that constantly scans the dirt being sucked up. tells you just what exactly you’re sucking up. 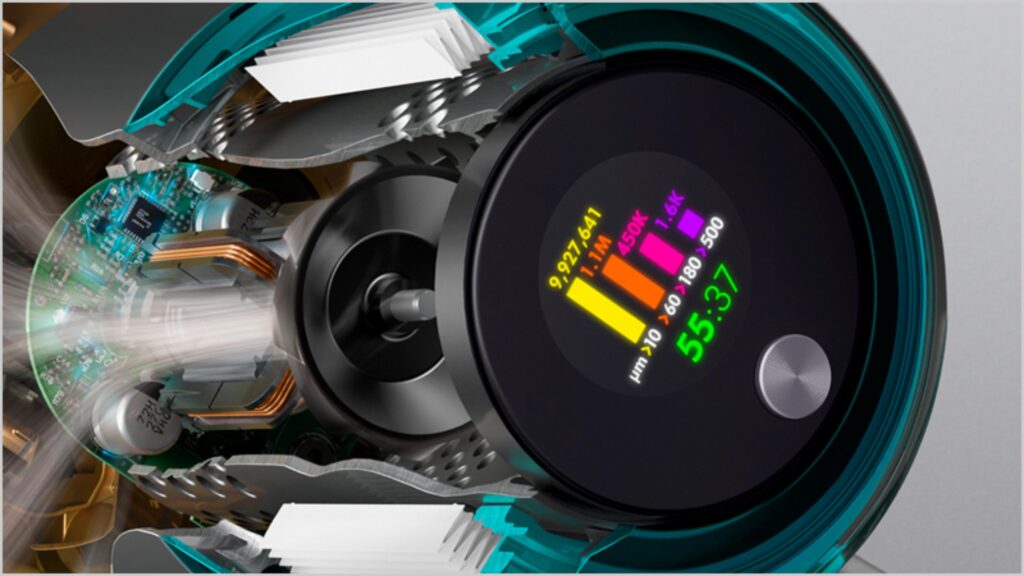 You get an up-top adaptor ideal for cleaning the tops of cupboards and high places, a comb-crevice tool for dusting off hard to reach corners, a powerful fabric and mattress tool capable of sucking up motes of dust from a mattress, a hair screw tool, a mini soft dusting brush that is perfect for cleaning monitors and TVs and a docking station.

In general, the standard model is ideal for general purpose use all about the house but the HEPA model and its ultra fine filter has accessories ideal for cleaning more delicate items like monitors, mattresses and in hard to reach places.

Here’s a breakdown of what you get with either vacuum:

How much is the Dyson V15 Detect Absolute (HEPA) in Malaysia?

The Dyson V15 Detect Absolute is the brand’s mainline cordless vacuum for 2022 and is priced at RM4,799 with a comprehensive set of kit that consists of two motorised cleaner heads – the Laser Slim Fluffy cleaner head and Digital Motorbar cleaner head as well as 5 tools – the Combination tool, the Crevice tool, the Hair Screw tool, the Wand clip and a Docking station to keep all your kit in one place and charge it too.

In terms of pricing, the Dyson V15 Detect Absolute (HEPA) costs RM4,999 in Malaysia and for the extra RM200, you get the aforementioned integrated HEPA filter, the same two cleaner heads as the standard Dyson V15 Detect Absolute and a different set of cleaning tools including two extra ones for a total of 7 cleaning tools including a Docking station too to charge and store the vacuum.

From now until 30th October 2022, you’re able to check out the new Dyson V15 Detect Absolute and its HEPA equipped variant at their technology event at 1 Utama as well as at all Dyson Demo stores nationwide. 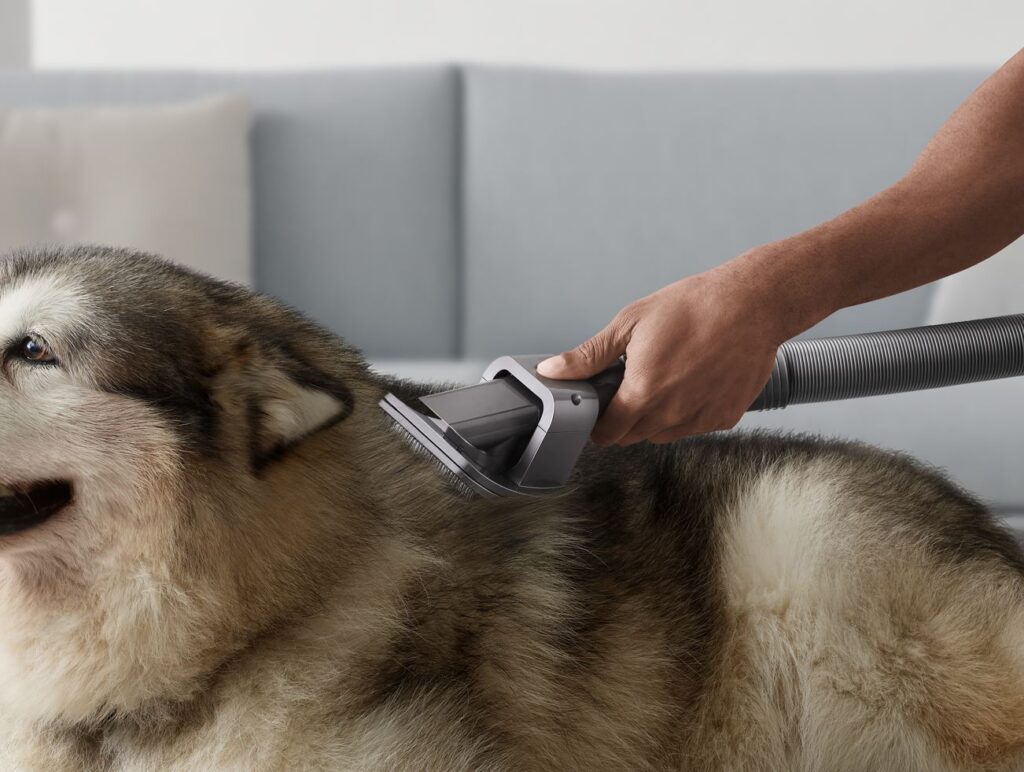 The new Pet Grooming Kit is also available – priced at RM399 while the Detail Cleaning Kit which features the dusting brush, awkward gap tool and extension hose costs RM399. The tools are backwards compatible with older Dyson cord-free vacuums too.