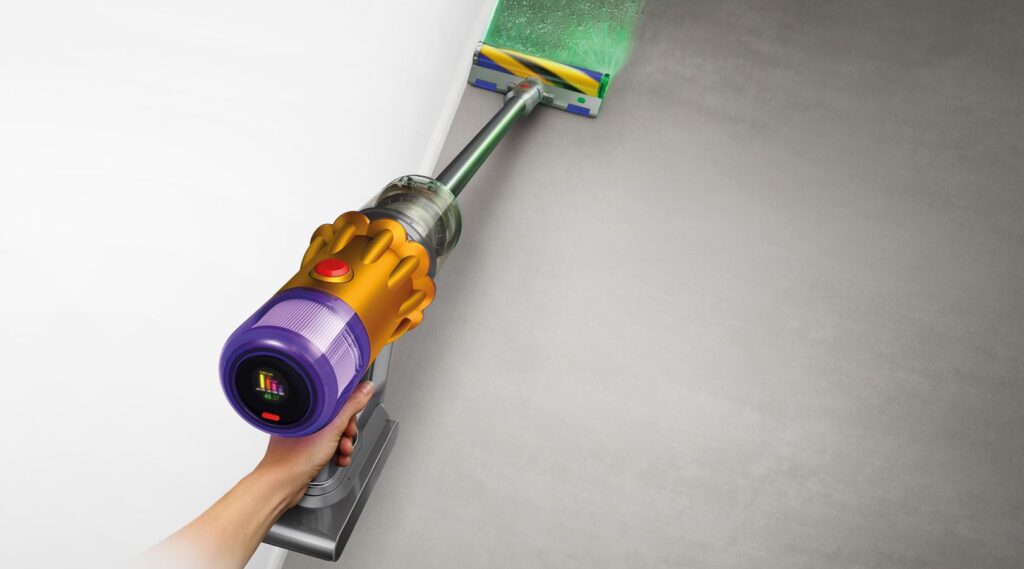 If you’ve ever had that nagging feeling that there’s still dust left lying around on the floor after sweeping it, you’ll appreciate what the new Dyson V12 Detect Slim that’s just launched in Malaysia has to offer, especially if you’re looking for an absolutely thorough, deep-clean for your floors.

Created in line with Dyson’s touchstone philosophy for product design that every creation is intended to answer a problem, The Dyson V12 Detect Slim is able to resolve that age old question – ‘Is a floor truly clean?’.

Savvy readers will likely realise that a Dyson V15 Detect does exist and which was announced sometime earlier this year in March.

Where it differs is that it’s a slightly lighter, slimmer and more compact design optimised for use in Asian homes which typically have hard floors and more compact floor layouts. But what exactly is a laser dust detection system anyway?

While the time-tested method would be to swipe your finger across a given surface to determine if it’s really clean, the Dyson V12 Detect Slim uses the power of engineering as it employs the use of a laser dust detection system which integrates a special green diode laser mounted in the Dyson V12 Detect Slim’s signature Slim Fluffy cleaning head at a precise 1.5-degree angle, 7.3mm off the ground  that emits a short-ranged swath of green light to truly see nigh-invisible motes of hidden dust with the naked eye.

Granted, seeing is believing but cleaning these tiny motes of dust is typically a challenge as they’re often so fine that conventional vacuum cleaners have problems even picking them up, let along detecting them.

Fortunately,  the Dyson V12 Detect Slim overcomes this as it uses their own powerful Hyperdymium motor to generate an impressive 150 air watts of suction, channelling all this into a sophisticated 5-stage filtration system that includes a HEPA filter to capture dust particles as small as 0.3 microns. To paraphrase a certain brawny Hollywood movie actor, “if you can see it, you can clean it.”

The mere concept of quantifying the dust you suck up in a given cleaning sessions sounds mind boggling if not impossible but Dyson’s latest cordless vacuum manages to do this with a unique acoustic dust sensing system that counts particles sucked in at 15,000 times a second and helpfully shows a counter on the rear LED display of the approximate size of the particulates you’re vacuuming in. 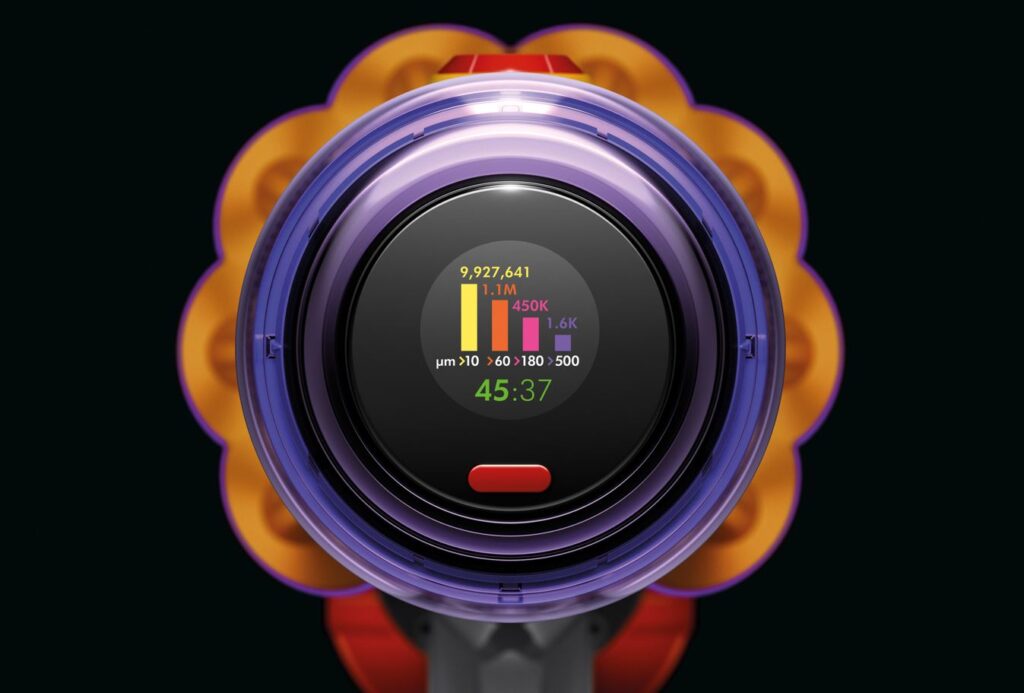 Better yet, this is tied into a sophisticated system managing the digital motor. Unlike the older models which requires you to manually trigger a high power mode, the dust sensing sensor is able to automatically ramp up to a higher suction power when it encounters stubborn clumps of dirt for a deeper, more effective clean when set to auto mode. Once that dirt has been dealt with, the sensor is able to ramp the power down to a more conventional level.

The end result with the laser? A decisive, empirical way to see and eliminate dust so that it looks clean, it actually IS clean on account of incoming dust being captured by a 5-stage filter capable of capturing particles as small as 0.3 microns – smaller than the width of a human hair – and expelling clean air afterwards with captured dirt shunted to a sealed container for easy disposal. 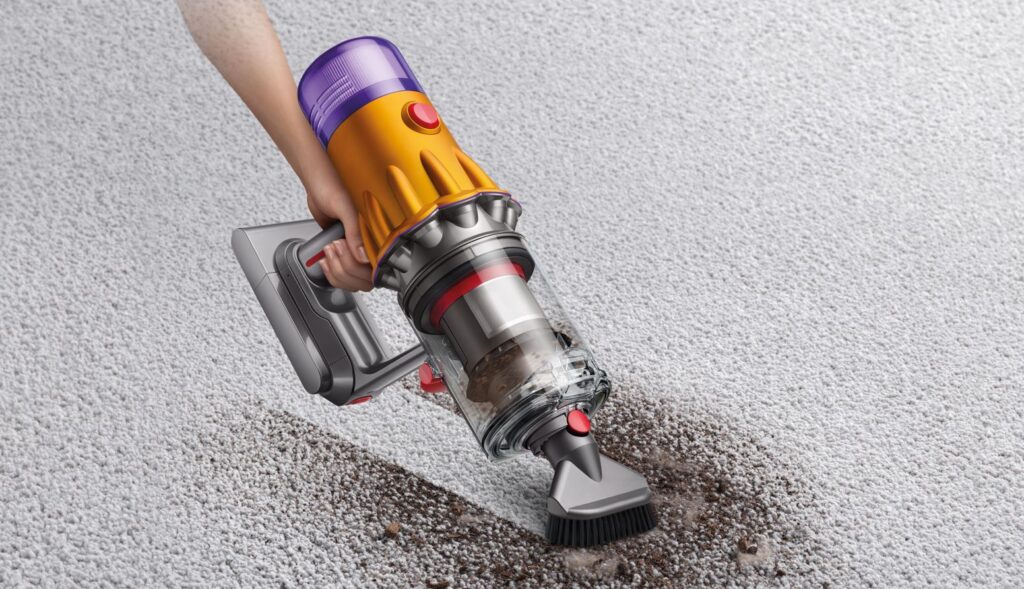 That’s not all as Dyson also integrates an attachment that’s capable of tackling one of the biggest pet peeves when vacuuming homes and which many current vacuums can’t handle – long hair.

If you’ve been using a vacuum cleaner for any length of time, you’ll likely encounter lengths of long hair lying about. While they do no harm, they tend to wrap up roller cleaner heads as they just spin around and around without going anywhere.

If you have to vacuum up a home with a pet or you or someone you live with has long hair, this can lead to a recipe for frustration as you have to spend time unclogging hair wrapped around the vacuum head. Enter the Dyson V12 Detect Slim’s Anti-Tangle Hair Screw Tool. Unlike a conventional vacuum, this unique cleaned head uses a conical brush bar that is able to spiral the hair off into the dust container without it getting stuck.

Where to buy the Dyson V12 Detect Slim

Here’s a breakdown of what attachments they have. To purchase, check out at www.dyson.my , Dyson Demo stores at The Gardens Mall and Mid Valley Southkey, and Dyson Service Centre & Store – TTDI. 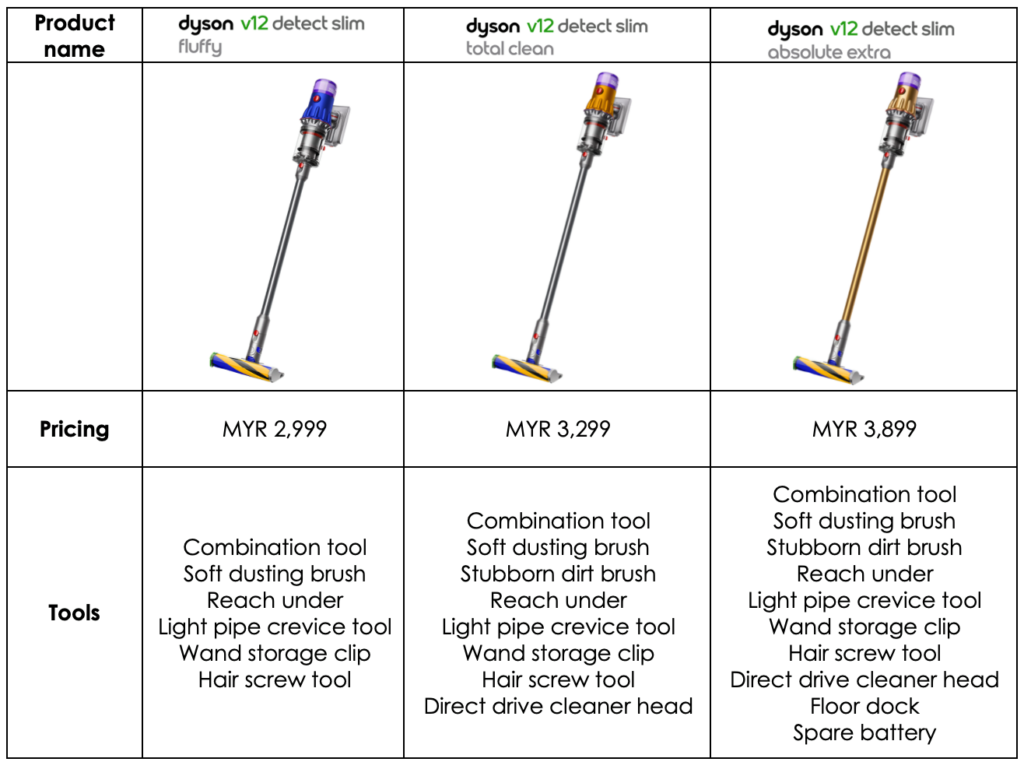