Gaze on the latest Dyson V11 cordless vacuum and you see a beautiful melding of form and function with hundreds of parts made of silicon, steel, aluminium and polycarbonate combined to form one of the most powerful portable vacuum cleaners that a man can wield.

By and large, we usually only see the end product of Dysons labours, packaged neatly on store shelves buta Dyson V11 doesn’t magically appear out of thin air, crafted by elves from the North Pole and while it’s nice to think so, it’s actually the end result of an extremely intricate dance between  hundreds of people and dozens of suppliers that culminate in the finished product.

Over the course of the last decade, Dyson has increased their presence in Southeast Asia, particularly in Malaysia and neighbouring Singapore with a mushrooming array of production as well as research facilities divided across both countries.

A couple of years back, Dyson further expanded their footprint with their Singapore Technology Centre aka the STC. The STC sees Dyson investing some US$561 million and hosts a series of testing and lab facilities, somewhat akin to its sister facility across the causeway, the Malaysia Development Centre (MDC) where research and development teams strive to build Dyson’s next generation of products.

We had the opportunity to take a look at the Malaysia Development Centre (MDC) sometime last year where a good chunk of Dyson’s research projects are ongoing to create the next generation of home care products while a vast array of product testing labs ensured that their stringent quality controls are maintained every step of the way for existing and future products alike down the line.

This time around, we took a jaunt over the Causeway and saw for ourselves just what lies within the walls of the STC when Dyson graciously gave us a whirlwind tour of their facilities including their Dyson Advanced Manufacturing Centre where their V11 digital motors were made.

What’s the Dyson Singapore Technology Centre aka the STC about?


Cutting edge technology the likes of which are integrated into Dyson’s latest hardware like their Cyclone V11 cordless vacuums and their Dyson Airwrap styling wand aren’t exactly readily available off the shelf for the taking. They’re the sum result of years of research and concepts so ahead of the curve that they’re almost technological sorcery.

That Airwrap we mentioned? It uses an esoteric principle that was primarily applied to aircraft dubbed the Coanda effect but applied to their styling wand to make it the hairstyling tool of choice for the fashionably fabulous. The V11 cordless vacuum? That in itself uses the principles of a cyclone and their new V11 digital motor to quite literally suck harder and better than anything else in the market.

The fruits of all this research and development as well as Dyson’s next step towards the future in terms of applied research in the fields of robotics, cloud and sensor development and more are what happens at the STC.

Located in a quiet factory district alongside their V11 digital motor production facility dubbed Dyson Advanced Manufacturing (DAM), the Dyson STC hosts entire football fields of testing facilities and labs where Dyson’s engineers and boffins verify that all of their products are both durable and reliable through a gauntlet of lab tests somewhat akin to the MDC over the Causeway;  some tests run in parallel to hasten the development process though the main focus at the STC is on electronics, machine learning and higher technologies.

Past the main reception area, Dyson has created a rather unique exhibit of their latest products that have been painstakingly assembled and suspended partway through the air in a living representation of an exploded CAD/CAM view so that viewers can actually see for themselves what is inside Dyson’s cordless vacuum though there were fully assembled and working examples on display as well. 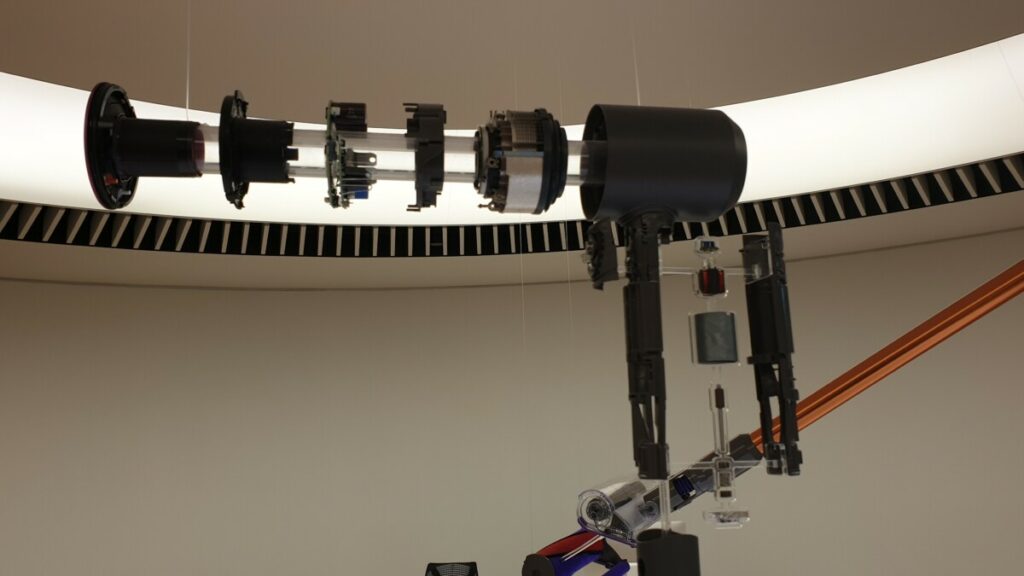 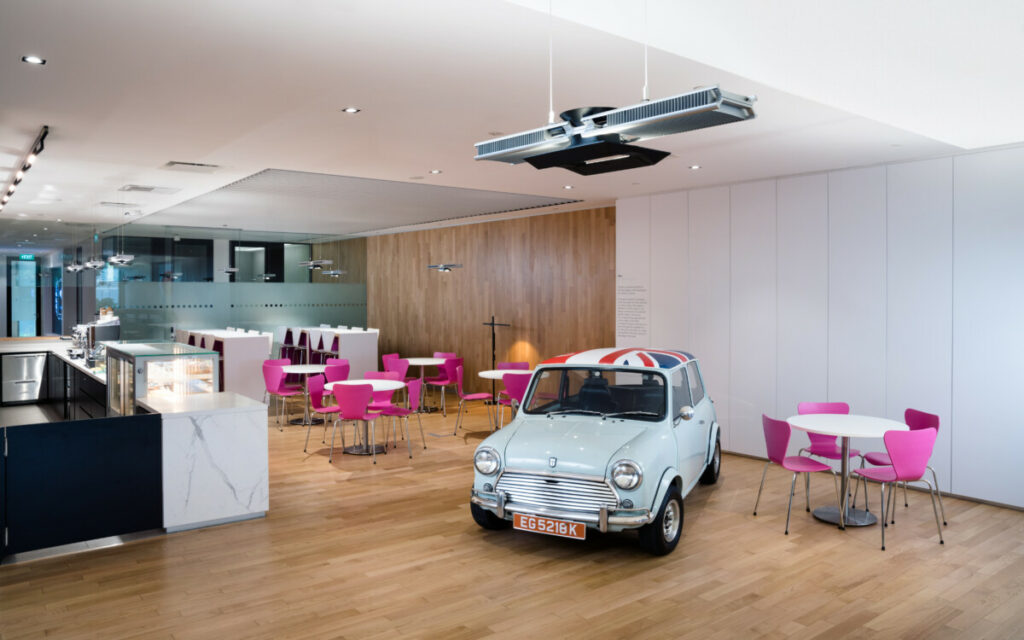 While we weren’t able to avail ourselves to a sarnie and a cuppa, we did get the chance to see what goes on at the STC. Somewhat akin to the MDC in design save for the aforementioned differentiated emphasis on electronics and other next gen tech, the STC had quite a similar array of testing areas, including an acoustic chamber to test how noisy or quiet Dyson devices were, vast fields of automated testing machines and labs to test everything from airflow to machine learning and, unique unto the STC, a fully mocked up living room where products could be put to the test. 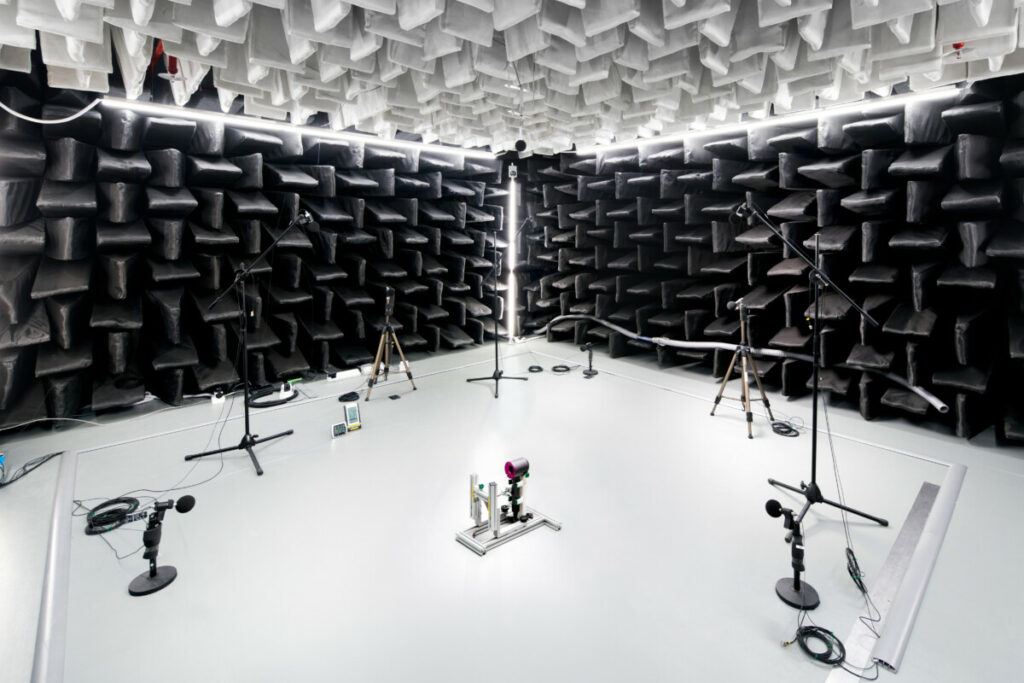 Another interesting feature was a whole wall of Dyson hair dryers, all seemingly at attention in regimented rows mounted on a wall. This was the tip of the iceberg though and far more lay behind our walls beyond our whirlwind tour but what they offered was a tantalising glimpse of the future. 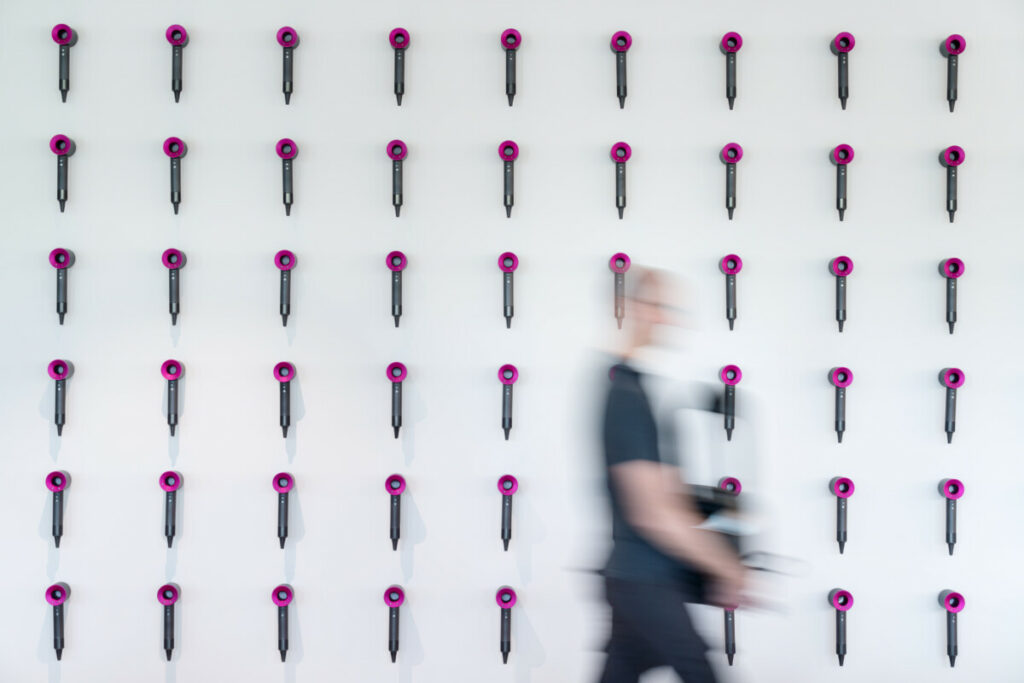 Next up, we took a quick jaunt to Dyson Advanced Manufacturing Centre where the heart of Dyson machines – the Dyson Digital Motor – is engineered. We had a glimpse of the latest V11 digital motors being created in the automated facility. Bar the necessity of human intervention to feed raw materials into the production lines, the rows of robots along conveyor belts that snaked across the football-sized fields were essentially able to churn out a working, complete V11 digital motor every 2.6 seconds. 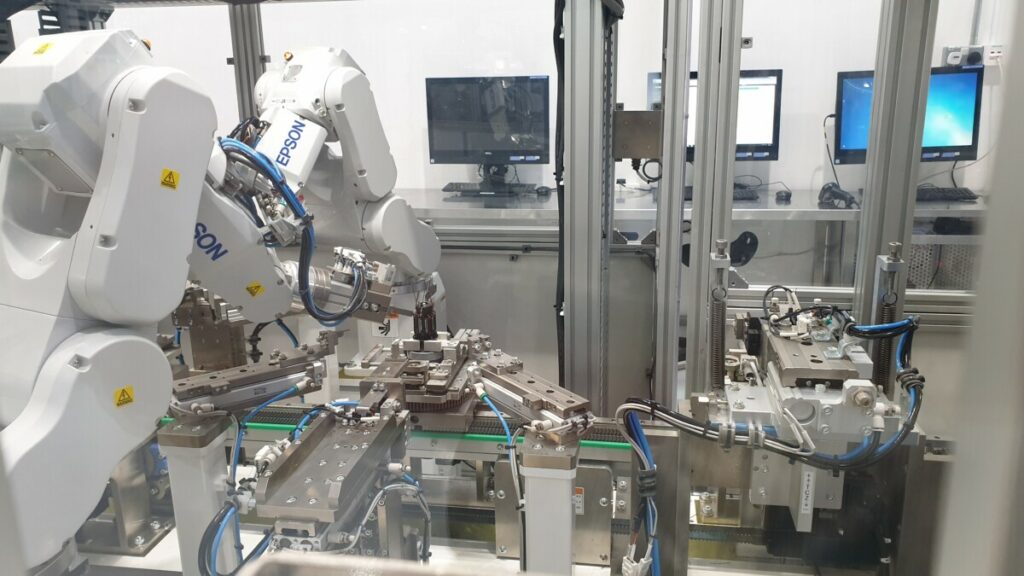 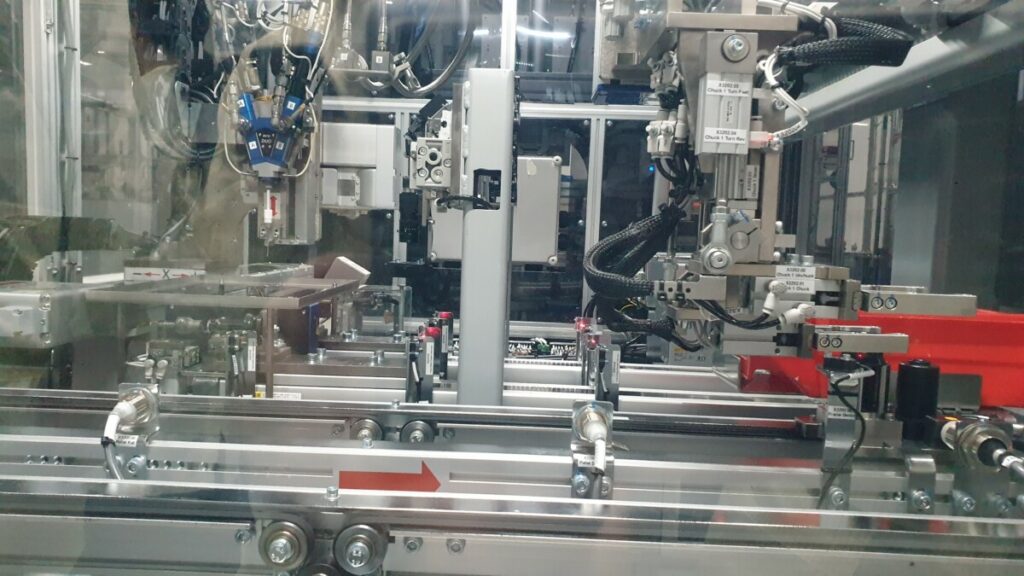 It’s a highly orchestrated, almost hypnotic dance as robot arms move in harmony, welding and moving components in ways too precise for even a human hand to fathom nor manage as a raw chunk of silicon and metal is gradually turned into a motor. It’s certainly impressive stuff to view indeed.

For more on Dyson’s regional launch of their V11, Lightcycle and Pure Cool Me in Singapore, swing by our feature here. In the meantime, we’ll keep you apprised on the latest Dyson kit and news as it happens.