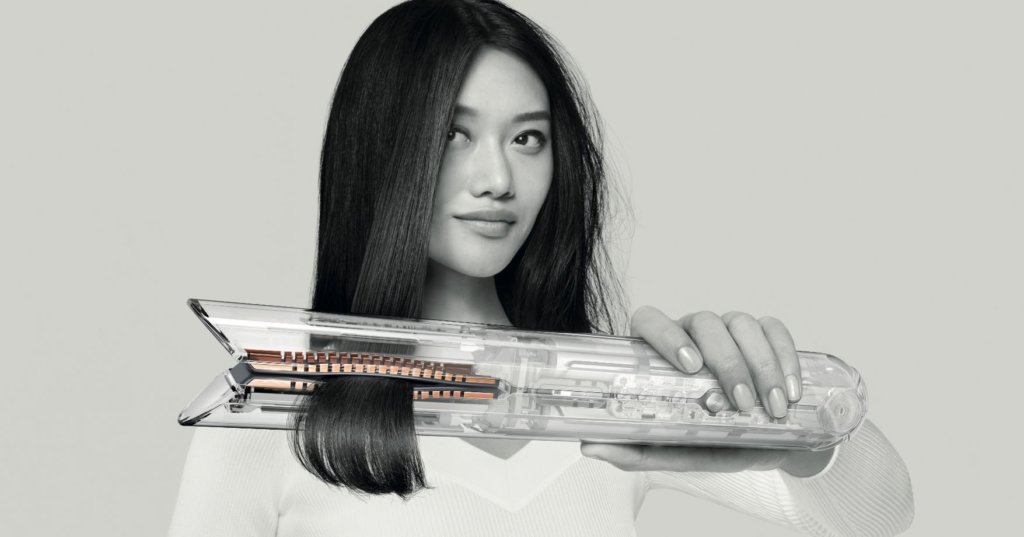 We interview the engineering team behind Dyson’s latest wunderkind, the Corrale hair straightener and discover how the tech behind it can straighten out haircare as we know it. Literally.

Straightening hair isn’t exactly a, pardon the pun, straightforward process as it proves to be a surprisingly tedious (and tiring) affair with traditional hair straightening irons as women have to clamp them onto hair with the visceral gusto of a medieval torturer while incurring the possible risk of too much heat damage to their hair just to get decent results.

And woe unto those needing to get a quick fix away from a plug point. While cordless hair straighteners exist, they often lack the power or endurance to tackle anything beyond a modest top-up job which is where Dyson’s new Corrale hair straightener comes into the picture.

The Dyson Corrale in Purple/Black. It also appears in Black Nickel/Fuchsia.

Launched earlier this year in the United States, the Corrale has finally made its way to Malaysia and since its launch until now, women have been queuing up around the block to get their hands on it. This certainly piqued our curiosity as it takes something special beyond the average sale to persuade a woman to pay top dollar for a hair styling product of this nature.

The straight and narrow on hair and hair straighteners

Broadly speaking, humanity as we know it is divided into four broad hair types – Type 1 (straight), Type 2 (wavy), Type 3 (curly) and Type 4 (very curly), with some people having minor overlaps between hair types. In Asia, we’re mostly Type 1 to 3. That’s not all though as how we treat our hair also affects how we style it too.

New hair emerges from the roots in our scalp and looks almost smooth and pristine when seen under a microscope but as it ages, it gradually frays over time which is why hair tips tend to be split and frayed. Exposure to chlorine from swimming in a pool and even salt water as well as exposure to sunlight all affect our hair texture and health.

Styling hair, never mind straightening it is not a precise process though as everyone has hair of different thickness and texture that’s further complicated even more with how we treat it whether it’s dyed, permed, styled and even our lifestyles play a part. Changing from one hair style to another such as a Type 1 to Type 4 and vice versa typically requires more heat and more aggressive treatment to get results as it won’t happen on its own or purely via chemical solutions, which is why hair straighteners were invented to achieve such results.

The science and methods of how we style our crowning glory haven’t exactly changed much in the past several decades though our understanding of how hair works has expanded. Most of the hardware that we’re familiar with that’s sitting on our dressing room table and owned by your friendly hairdresser are unchanged from what you’d have seen at the turn of the century, save for the inevitable change in what constitutes as a fashionable hairstyle over the years. 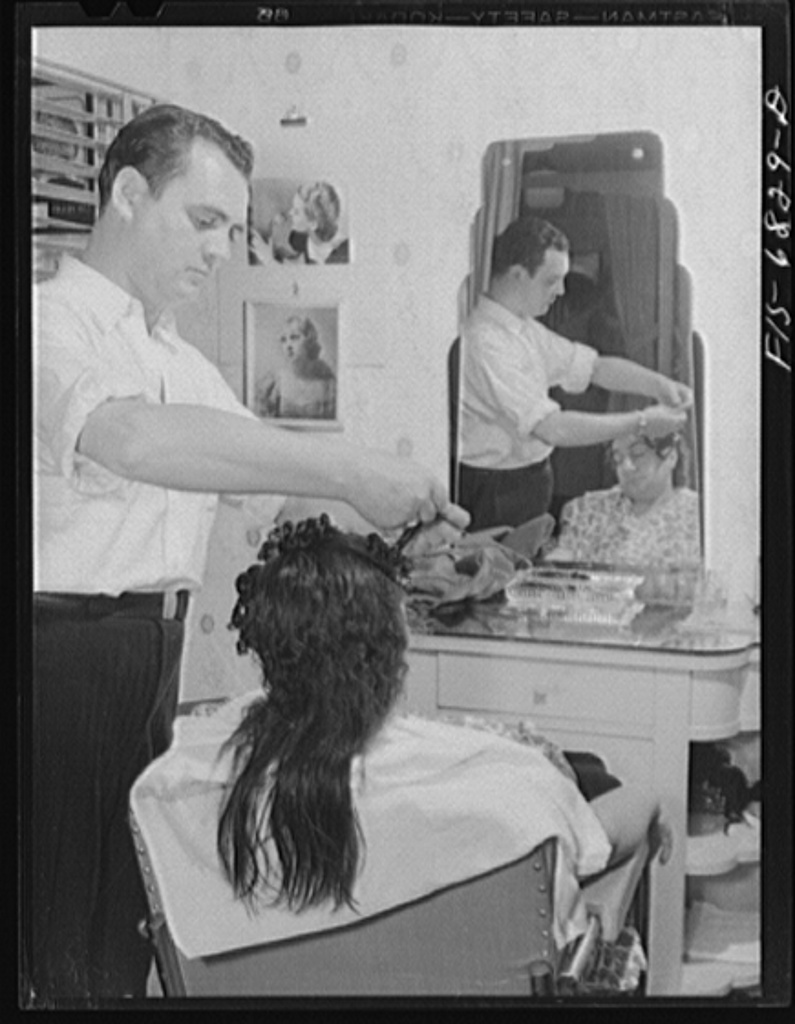 The traditional hair straightener, or flat iron if you’re a Yank, itself came about sometime in the 1890’s when women sought smoother and sleeker hairstyles. This was achieved with the creation of two heated combs or flat irons held together with a hinge in the fashion of a pair of tongs and the use of heat to temporarily make hair straight. Doing it too often or doing it wrong could often end up with hair damage and getting it done properly often required a trip to a salon. That’s where the Dyson Corrale hair straightener comes into the picture.

What is the Dyson Corrale?

Dyson’s new Corrale is, at heart, a hair straightener in form and function but crams in so much cutting-edge tech into it compared alongside your average hair straightener that it’s like comparing the Concorde to the Wright Brothers Kitty Hawk.

Almost seven years in the making, the Dyson Corrale is the sum effort of millions of pounds of research into how exactly hair can be styled effectively, a ton of testing on kilometers of (real) hair and a melding of their latest tech, in particular their battery technologies into one rather slick looking design. 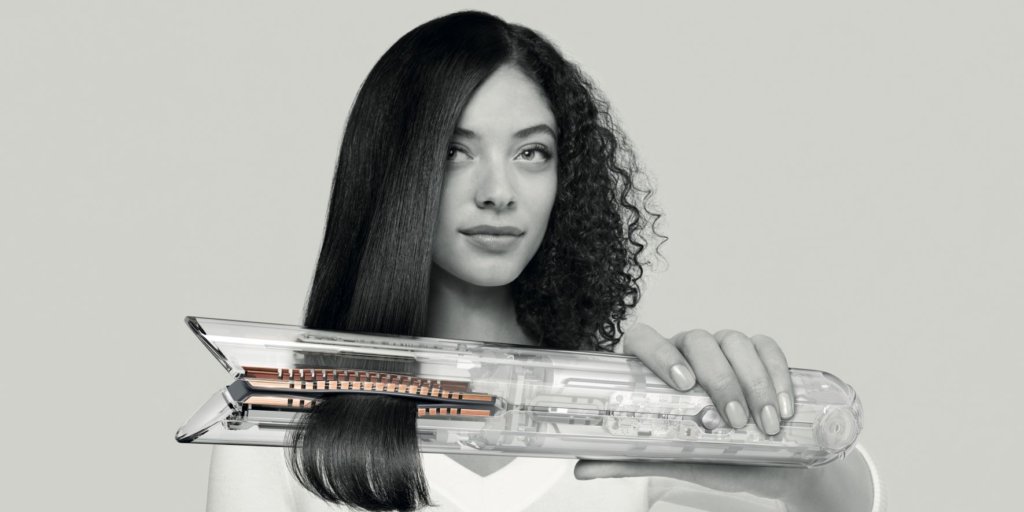 To effectively style hair with a hair straightener, you need to have a balance of heat, tension and control. Too much or too little of any of these factors and you can end up with less than optimal results and by less than optimal you’ll likely incur hair damage from uneven heating or results that need multiple passes to fix. The magic here is that the Dyson Corrale handles all these factors for you and tackles them in one fell swoop to get consistent and effective results every time.

The linchpin of the Corrale’s effectiveness is on account of the use of a pair of flexing plates made of a copper manganese alloy. The flexibility of these plates allows the Corrale to evenly apply heat to strands of hair without clumping while eliminating the need for excessive hand strength. Added to this fundamental cornerstone of tech is what Dyson calls intelligent heat control and a built-in battery. 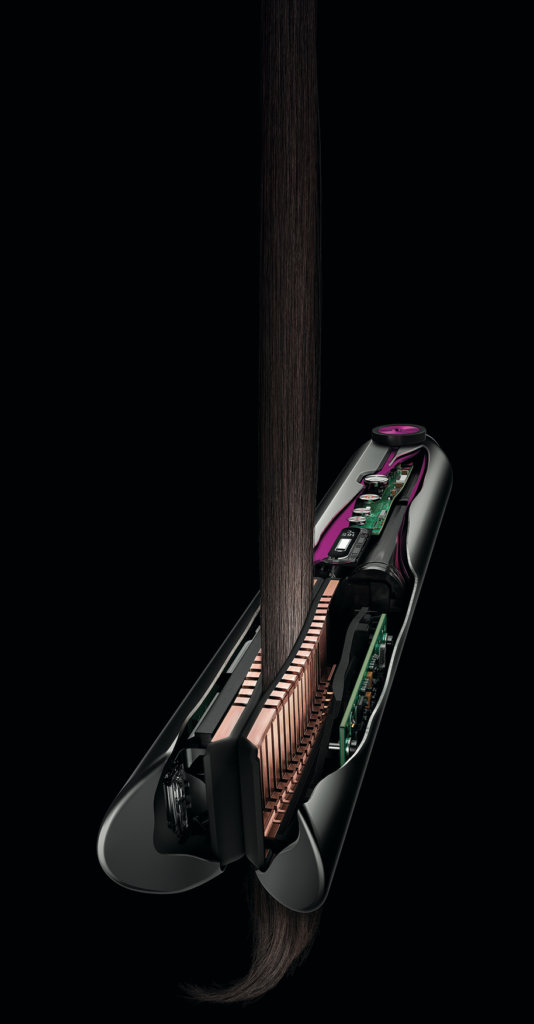 On their own, these individual technologies won’t look out of place in other tech but when integrated together in the Corrale, that’s when it becomes a literal hair-raising experience.

In many conventional hair straighteners, the heating plates are typically made of stiff slabs of ceramic or metal that don’t flex and that don’t conform to how hair is shaped, especially when it’s clumped into strands. It’s like trying to grab strands of pasta between a flat pair of greased chopsticks. Everything just slides willy nilly. This means users need multiple passes to get the results and in doing so, some clumps of hair often get too much heat and, for lack of a better word, get overcooked from heat damage.

To address this, the Corrale uses flexible heating plates that can flex back and forth to some degree. This flexibility means that it’s able to gently and firmly hold strands of hair and then evenly apply heat to each hair strand without overheating it, all in a single pass. Users needn’t have to clamp down hard to evenly distribute heat with the Corrale unlike traditional hair straighteners, which in turn leads to less hand strain.

Unlike the traditional death grip needed to effectively use a normal hair straightener, the engineer demonstrated a surprisingly more relaxed grip in a live demo while still yielding equal or better results with just one pass.

To achieve this requires a feat of engineering knowhow, something that Dyson’s engineers have down pat. When stripped to its core components, each flexing plate consists of a manganese copper alloy plate that has been specially machined to have a series of grooves that are a precise 65-microns wide. This is the width of the average human hair and helps to evenly distribute hair strands so that you don’t need as much heat to straighten it.

This manganese copper core is then electroplated with nickel for added toughness against general wear and tear and then a final coat of titanium nitride is then applied in a vacuum chamber. This titanium nitride coating isn’t just for looks as it ensures a low friction surface so that hair glides smoothly when it passes through the Corrale.

More astute readers will wonder why the Corrale doesn’t use better known materials like teflon (the stuff on nonstick pans). The simple answer is that titanium nitride sticks better to the manganese copper alloy while offering the same low-friction properties.

The end result is a highly flexible plate that attaches to both inner sections of the Corrale that can evenly, safely and effectively transfer heat. In effect, this allows users to get results with just one pass at most depending on the intended hairstyle.

Power up – How the Dyson Corrale stays powered and cordless

While cordless hair straighteners do exist, none of them are capable of what the Corrale can do as it’s capable of operating at maximum effectiveness even when dialled to maximum heat settings for a good 30 minutes before needing a recharge.

Leveraging off Dyson’s forays into battery tech, the Dyson Corrale packs four lithium-ion batteries in the handle that can be recharged via the provided dock or charging cable. 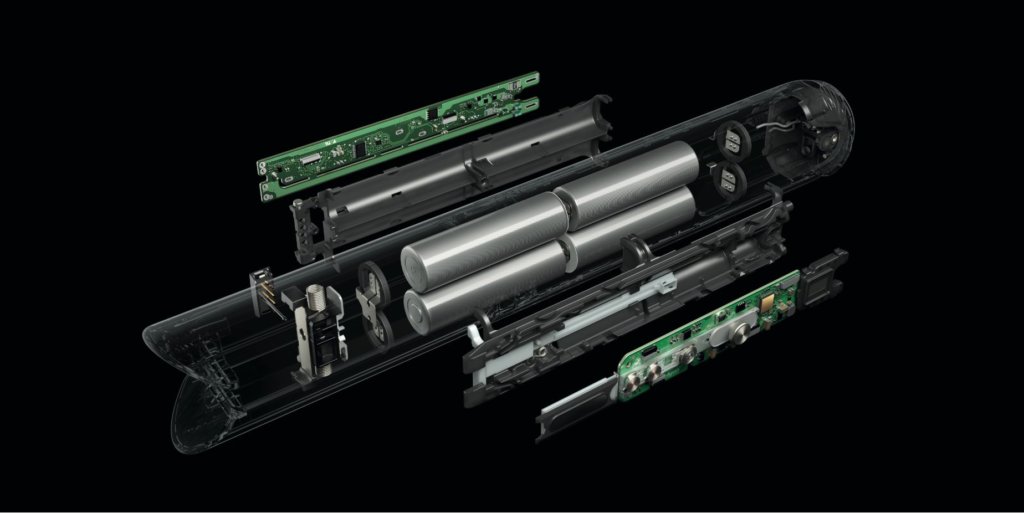 With 30 minutes of battery life at full power, you’re able to get some serious styling done on the go rather than having to resort to mere touch-ups with competing kit which makes it a very handy addition to any ladies’ beauty ensemble.

Charging it is even easier as it has the end of the charging cable is magnetic so you needn’t have to fumble about for the port; simply putting it in close proximity attaches it in seconds. You can also opt to put it in its charging dock too which comes bundled with the whole package. This means you can use it corded or cord-free as the situation warrants it.

The Dyson Corrale has a magnetically attached charging cable that allows for easy and convenient charging.

If you’re going on a trip, the Corrale even has a flight mode that renders it TSA safe as it physically disconnects the batteries from the rest of the device to make it absolutely safe to tote around in your hand-carry. 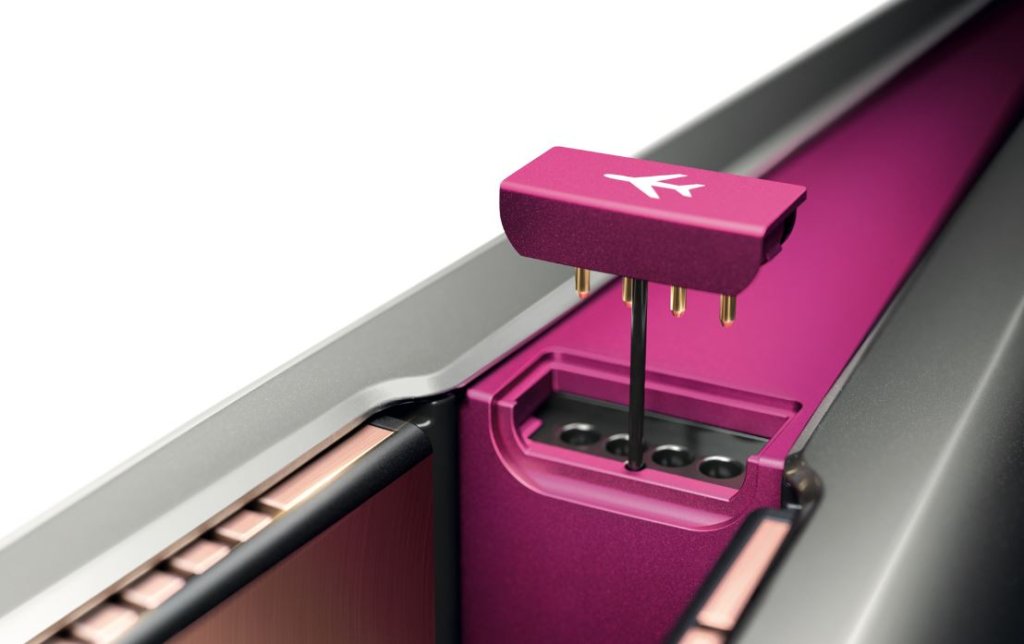 Pull the flight safe connector and the Corrale’s battery is physically detached from the rest of the device for safe transport during flight.

READ  The new ASUS ZenFone 4 family leaks ahead of launch

To paraphrase a popular fictional character, ‘with great power comes great control’, which is why Dyson has included what they call intelligent heat control in the Corrale. This involves a series of sensors that track the heat in the aforementioned flexing plates a 100 times a second and feeds it to a microprocessor in the Corrale that precisely regulates the temperature and allows users to set and retain the exact heat settings they want from a choice of 165°C, 185°C and 210°C. 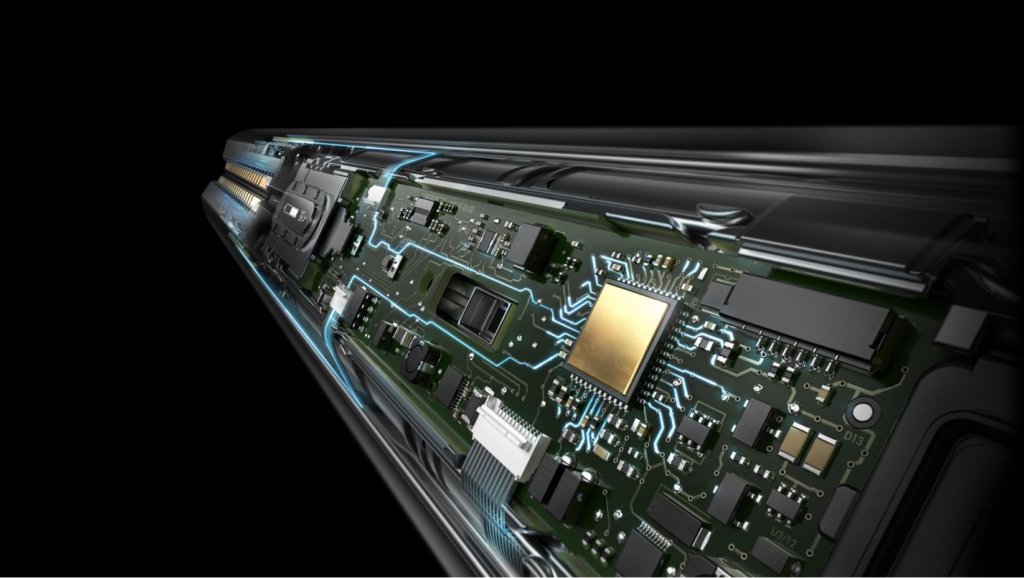 Oddly enough, according to Steven, the optimum temperature to style hair is a 165°C. If so, why would we need higher heat settings? Fortunately, he had an answer and it was surprising indeed. After multiple trials, the Dyson team realised that women often wanted different hair styles on different days and different women would have different hair types and textures.

He also added that more complicated hairstyles also needed a higher heat setting for it to work which is why the Corrale has not one but three selectable heat settings. Steven also added another interesting factoid – our humid weather in Malaysia tends to affect our hair and reduces the time that our hair remains styled. This is reversed in less humid places like Europe which also means that higher heat settings are needed.

Dyson Corrale availability and why it’s worth the money

Ultimately, the Corrale melds Dyson’s mastery of battery technologies along with their recent advancements and knowhow in how hair works, especially how to style it in an effective fashion.It’s a bit on the pricey side as hair straighteners go but seeing the amount of research and technology poured into it, and above all, the results it can deliver, it’s clear that you get what you’re paying for. 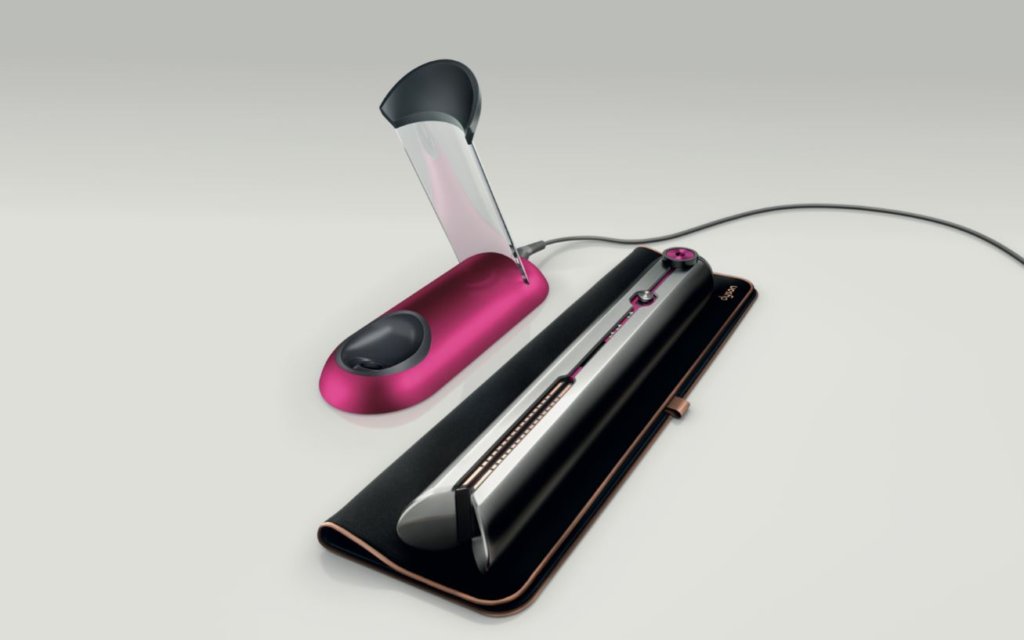 Dyson’s latest hair straightener is now available nationwide priced at RM2,199 and available in your choice of Black Nickel/Fuchsia and Purple/Black. The Black Nickel/Fuchsia variant is available for sale online at the Dyson store at authorised retailers nationwide as well as Dyson Demo stores at The Gardens Mall, QueensBay Mall in Penang, MidValley Southkey in Johor Bahru, the Dyson Demo Zone – Beauty Lab at Sunway Pyramid and at 1 Utama. The Dyson Corrale in Purple/Black is a Dyson exclusive and is available only online at the Dyson store and at the aforementioned Dyson retail outlets. Stay tuned for our full review!