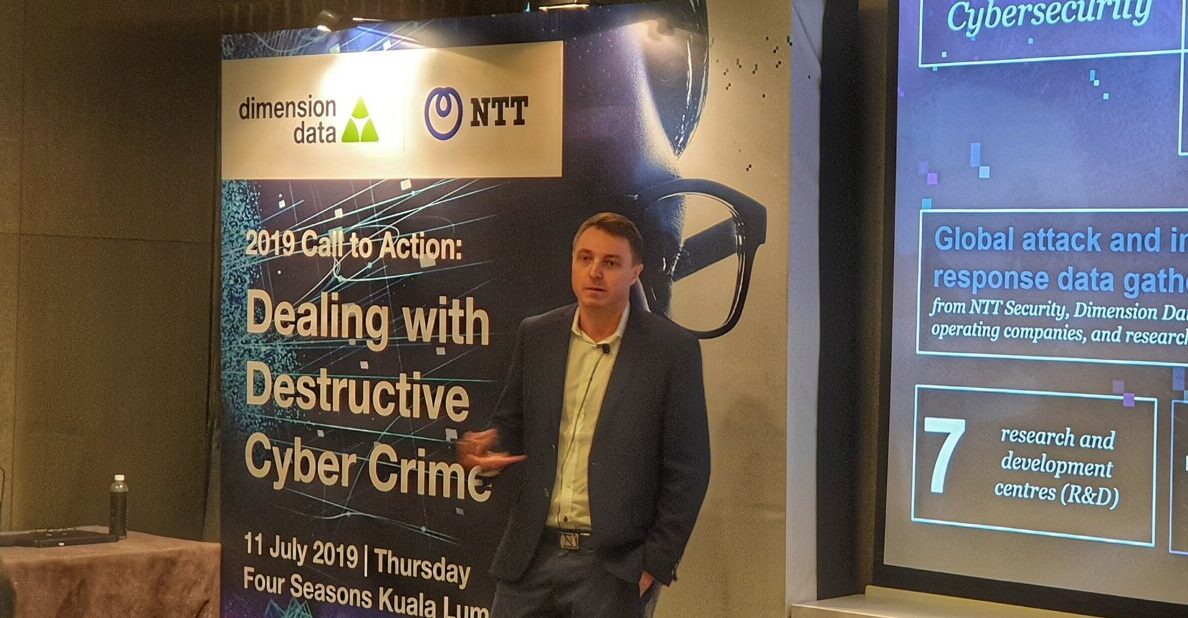 Dimension Data, one of the world’s largest global technology integrators and managed services providers for hybrid IT shared their latest insights on the state of cybersecurity readiness of organisations across a number of markets and sectors in their annual Executive Guide to NTT Security’s Global Threat Intelligence Report for 2019 in collaboration with CIsco, F5 and Recorded Future.

In a special briefing to industry partners and guests, Mark Thomas, Vice President, Cybersecurity of Dimension Data Global shared key findings of the report. The report shares several worrisome facts with the most glaring being that security vulnerabilities in organisations have surged 12.5% up from 2017. In terms of overall preparedness and awareness for cybersecurity, most organisations earn an eyebrow-raising 1.45 points out of 5 on the cybersecurity maturity rating; the rating is determined based on an organisation’s overall approach to cybersecurity from a process, metrics and strategic perspective. 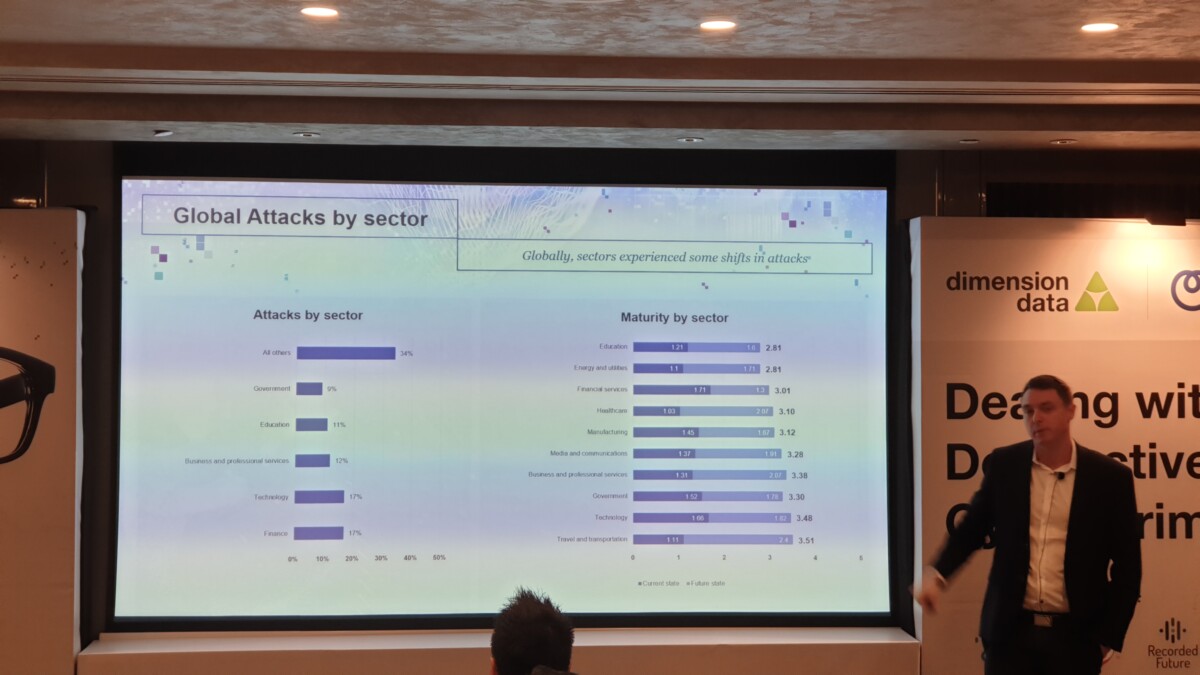 There is a bit of a silver lining though with the finance and technology sectors both having the highest maturity ratings at 1.71 and 1.66 points respectively which is likely a result on account of them being the most targeted industries by threat actors with each one accounting for 17% of all attacks recorded in 2018.

In terms of the most common attack vectors, 73% of hostile activity falls into one of four categories – web attacks, reconnaissance, service-specific attacks and brute force attacks.The findings of the report revealed that web attacks accounted for 32% of all attacks detected last year, almost doubling in frequency since 2017 followed by reconnaissance (16%), service-specific attacks (13%) and brute-force attacks (12%).

Other key highlights of the NTT Security’s Global Threat Intelligence Report for 2019 include the fact that 35% of attacks originate from IP addresses within the United States and China followed by EMEA and APAC. One key point to note is the fact that an attacker’s IP address does not necessarily reflect their affiliation or where they are actually located which complicates matters somewhat in terms of identifying and stemming the threat. 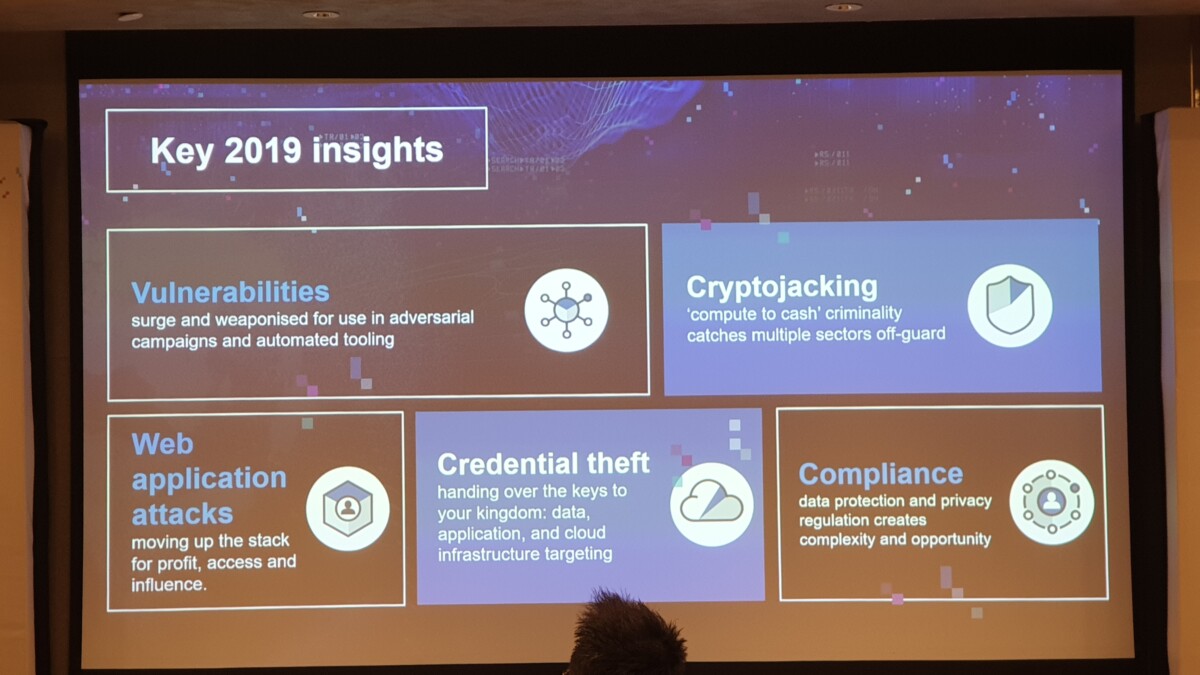 For hostile activity by threat actors, cryptojacking accounts for more detections than all other malware combined with attackers targeting credentials especially towards tech companies (36%), telcos (18%) and business and professional services (14%).

Mark Thomas, Vice President, Cybersecurity of Dimension Data Global said: “There’s clearly work to be done across all sectors in order to establish more robust security postures. However, it’s reassuring to see many C-suite leaders recognising the importance of making more strategic investments to improve their cybersecurity defences.”He continued: “There have been some exciting developments in the predictive threat intelligence space, with new levels of collaboration and buy-in across the cybersecurity value chain. What’s more, the most-targeted industries are also the most likely to seek assistance to evolve their strategies and build their security programmes. This bodes well for companies looking to reach their desired cybermaturity state.”

To peruse NTT Security’s Global Threat Intelligence Report for 2019 in detail you can visit the following link http://bit.ly/2GSyalY