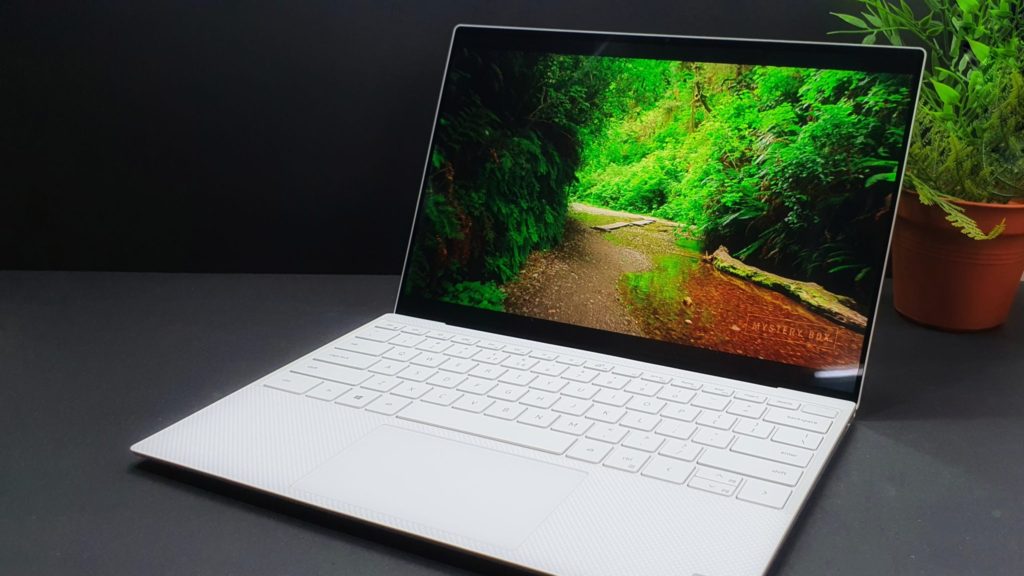 Finding a laptop that possesses high performance, excellent battery life and sufficient build quality to impress the suits in the boardroom is an elusive task. Save for a few specific models in the industry, there is usually some compromise or another that makes them fall short of greatness but in the last few years, Dell’s XPS 13 series has made a name for itself with a consistent, successive series of models that have become widely lauded as the epitome for ultraportable design. Their latest successor to this illustrious lineage, the Dell XPS 13 9300 for 2020 aims to embody all these qualities and much more. 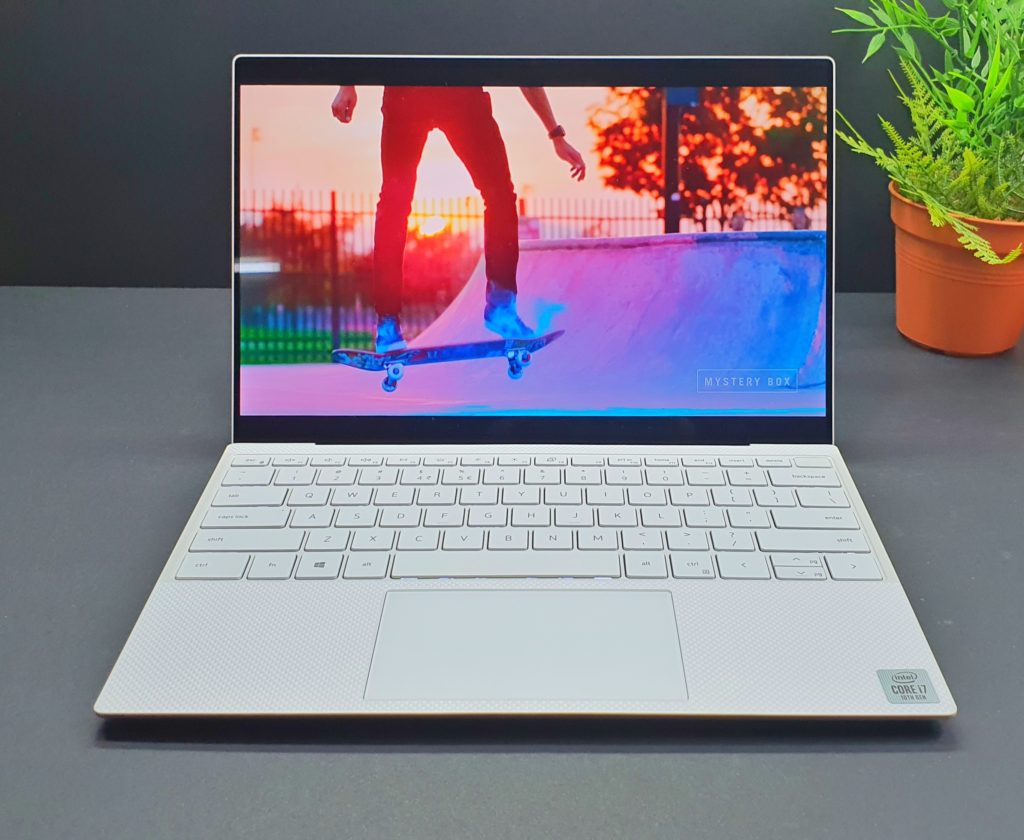 We first laid eyes on the XPS 13 9300 on the showroom floor at CES 2020 and even talked to its creator Justin Lyles about the thought process and inspiration behind the iconic XPS series design and its 2020 refresh. Now, we’ve finally got our hands on the production model and it looks exquisite indeed.

While there have been a few missteps along the way like the maligned ‘nosecam’ from the 2018 model, the Dell XPS 13 has gotten the fundamentals right and has consistently refined its mission profile of being the best consumer ultraportable that money can buy. 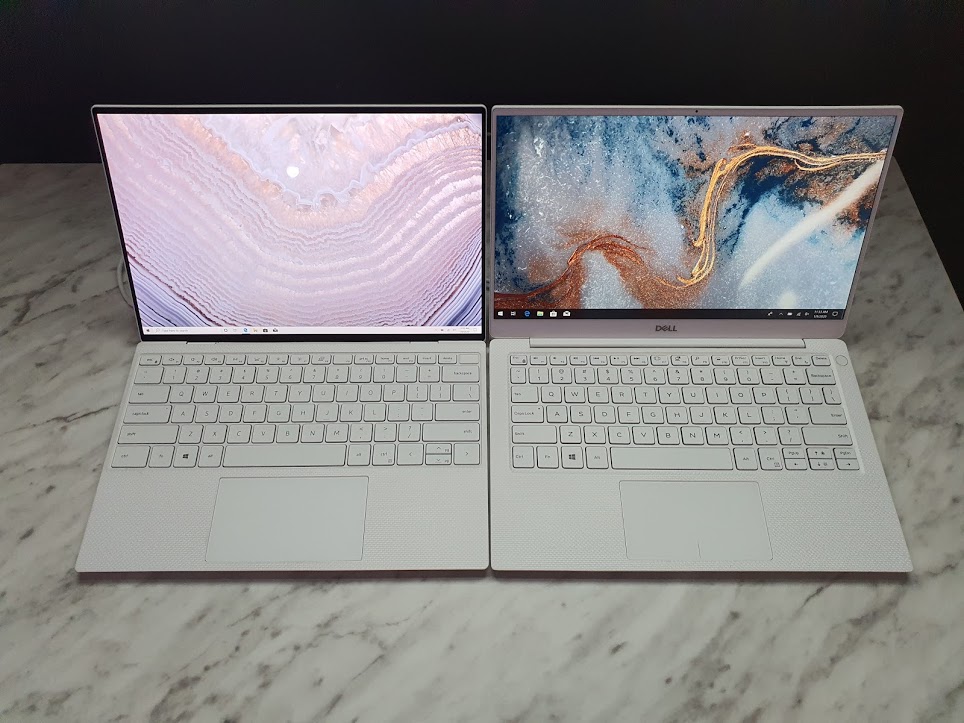 On top of the obligatory upgrades this year to Intel 10th Gen Intel Ice Lake CPUs and the usual improvements in storage, the new Dell XPS 13 notably has a larger four-sided InfinityEdge display that manages to shaves down the bottom bozel all the way to its limits to effectively offer more screen real estate than its predecessor.

The Dell XPS 13 from 2019 had equally slim top and side bezels but retained a chunky bottom bezel. The best part? Even with Dell shaving these bezels all the way down to 4.6mm on each side, they’ve still managed to retain a 720P webcam in the top bezel. 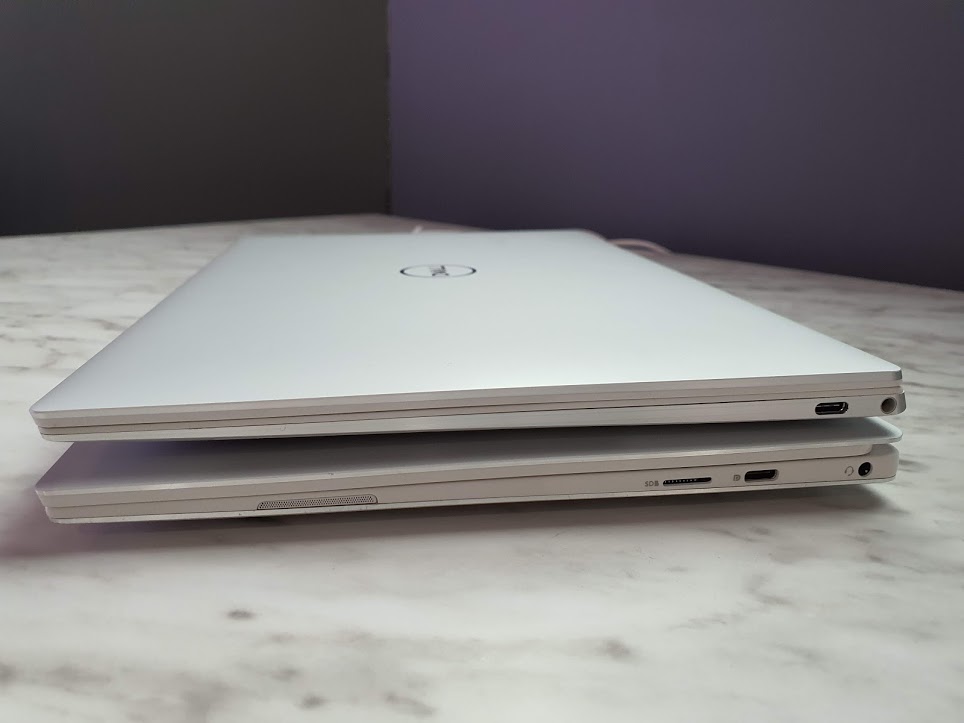 The newer XPS 13 9300 moves the microSD card reader to the left side but retains the Type C 3.1 port

Combined, these minor savings on bezel size have allowed Dell to cram in a 13.4-inch UHD resolution touch display which is slightly but appreciably larger by 0.1-inches from the 2019 model. There’s also been a minor redesign of the keyboard with 9% larger overall buttons along with a 17% larger touchpad. 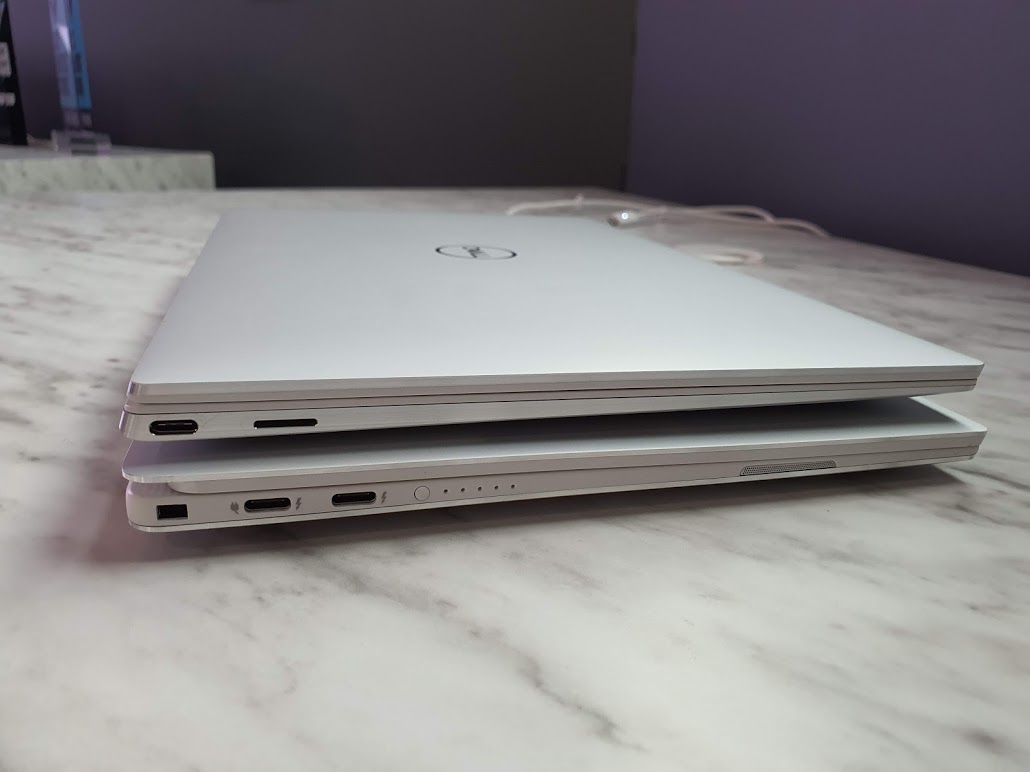 The left side of the Dell XPS 9300 has a microSD card reader and the second Type C 3.1 Display Port which is one less than the older model.

The good part is that the chassis and design of the new XPS 13 9300 is a straight-up improvement without any tradeoffs save for one minor detail, the removal of the USB Type C 3.1 port from the older model though it still retains both Type-C with Thunderbolt 3 ports.

In keeping with its distinguished pedigree, the Dell XPS 13 9300 has suitably impressive packaging. The notebook itself is ensconced within an ostentatious looking white box with a magnetically sealed flap. Flip the lid open and you’re greeted by the notebook itself wrapped in a plastic sleeve. 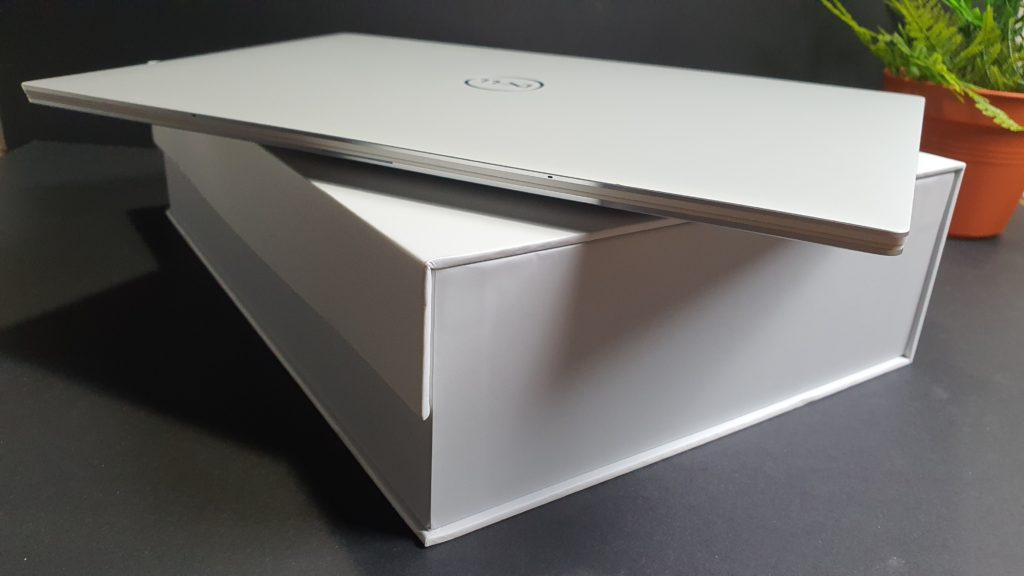 Just beneath the laptop are two compartments, with one holding a USB Type C to USB Type-A dongle while the other has the Type-C charging cable to charge the laptop.  The charging cable and power pack itself is similar to last year’s XPS 13 and is essentially identical.

Our test unit of the new Dell XPS 13 comes with its now distinctive Frost White finish which has an external chassis made of a semi-matte aluminium finish with Alpine White carbon fiber palm rests. 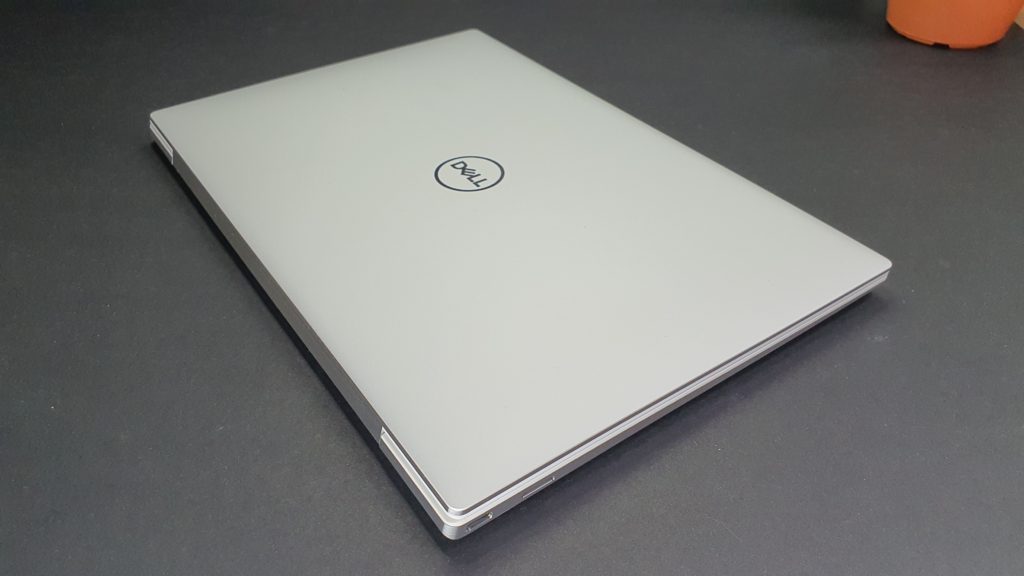 The external finish itself is highly resistant to fingerprints and feels exceptionally premium on account of being machined from a single block of aluminium alloy for sturdiness. At 1.27kg, the XPS 13 9300 isn’t the lightest ultraportable out there but is still comfortably light enough to carry around all-day in a backpack.

The left side has a microSD card reader with a USB Type C 3.1 port for charging and data transfer at Thunderbolt 3 speeds and DisplayPort support. The right side has a similar Type C 3.1 port so you’re able to use either one based on personal preference. There’s also a 3.5mm combo audio jack as well nestled in the corner. 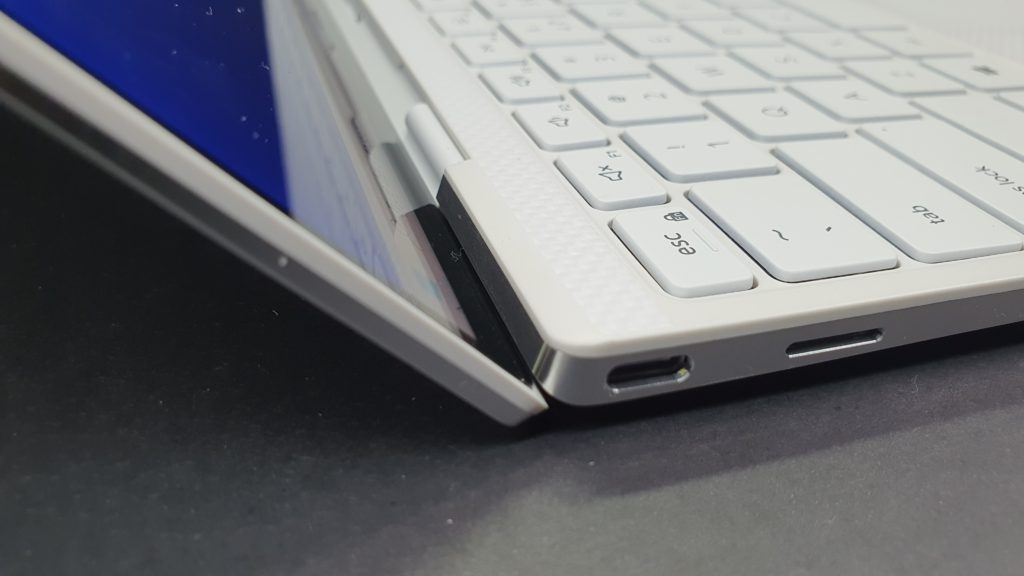 Flip the lid open and you get to lay eyes upon the four-sided InfinityEdge display. While it comes in a variety of configurations, our test unit was the highest end variant with a 13.4-inch UHD 4K touchscreen with a 16:10 aspect ratio and a 91.5% screen-to-body ratio. Alternatively, you can opt for a more modest 1080P matte, non-touch display with a similar 16:10 aspect ratio along with several other possible touch-capable permutations if you’re looking to save a bit of cash.

Up top, perched where it ought to be is a 720P webcam that one-ups its predecessor as it also has a Windows Hello infrared sensor so you can unlock your laptop with your face. 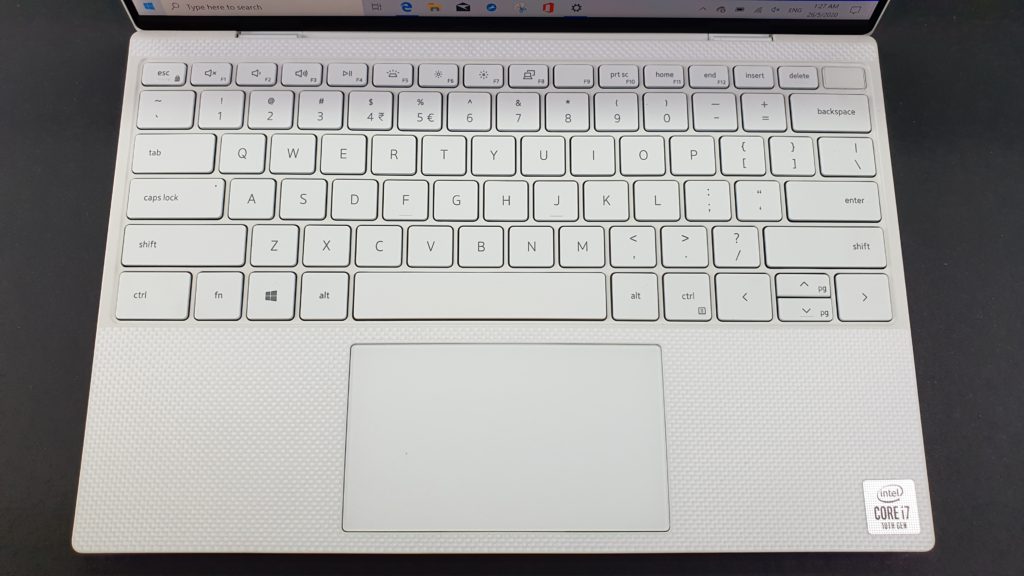 The keyboard itself is noticeably larger as well with bigger keys and a wider touchpad. Like its predecessor, the power button also doubles as a fingerprint reader as an alternative means to unlock the XPS 13 9300. 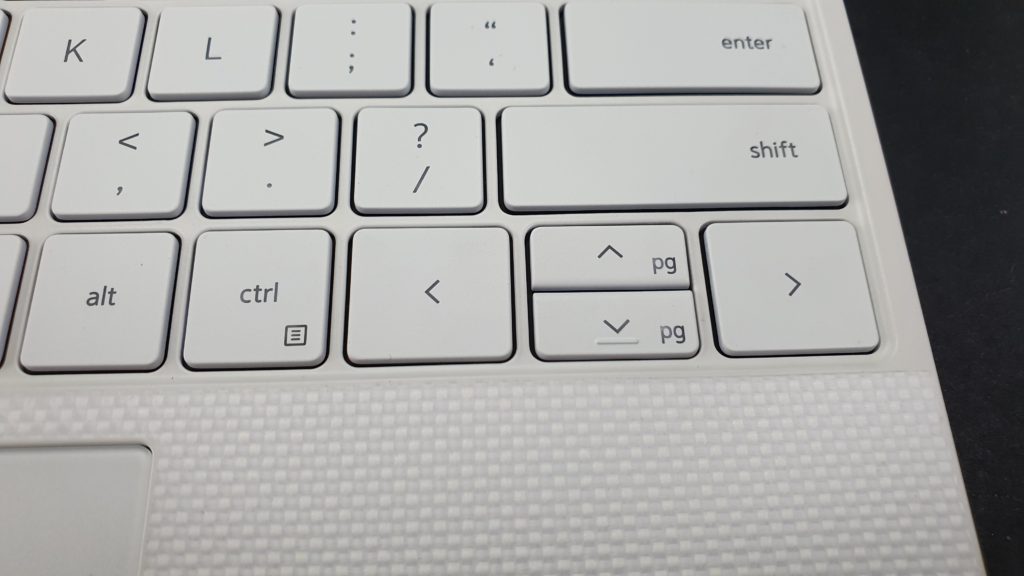 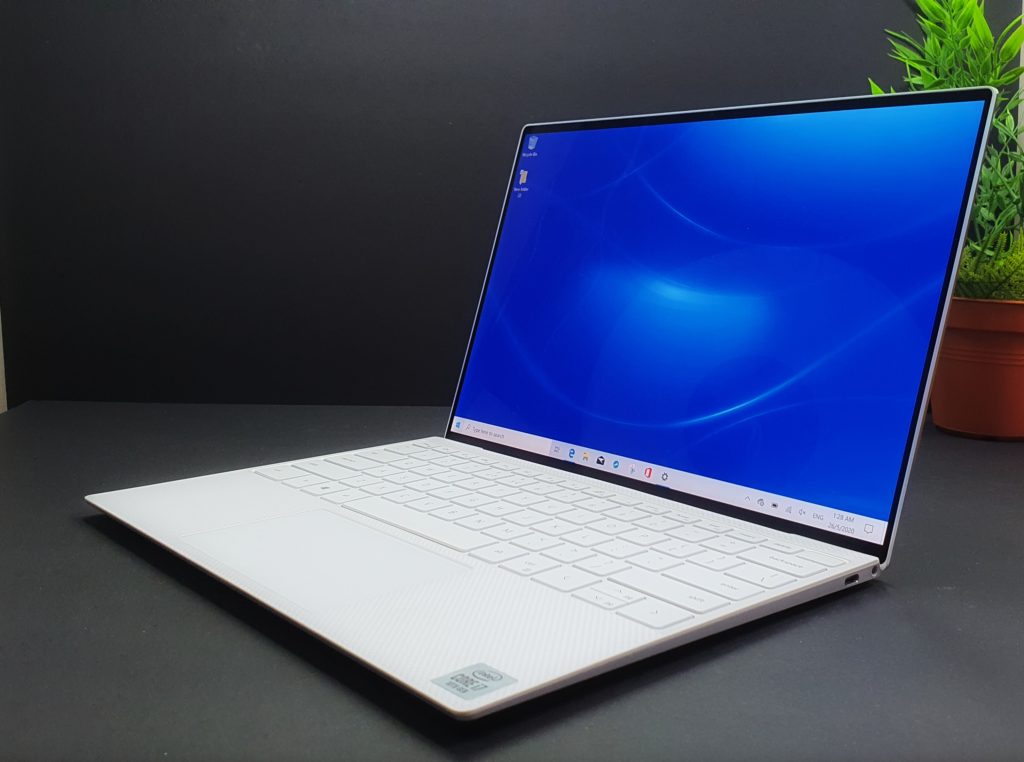 The textured carbon fiber palm rests retain the same stain resistant finish and have excellent tactility without it accumulating crud, stains or other detritus. 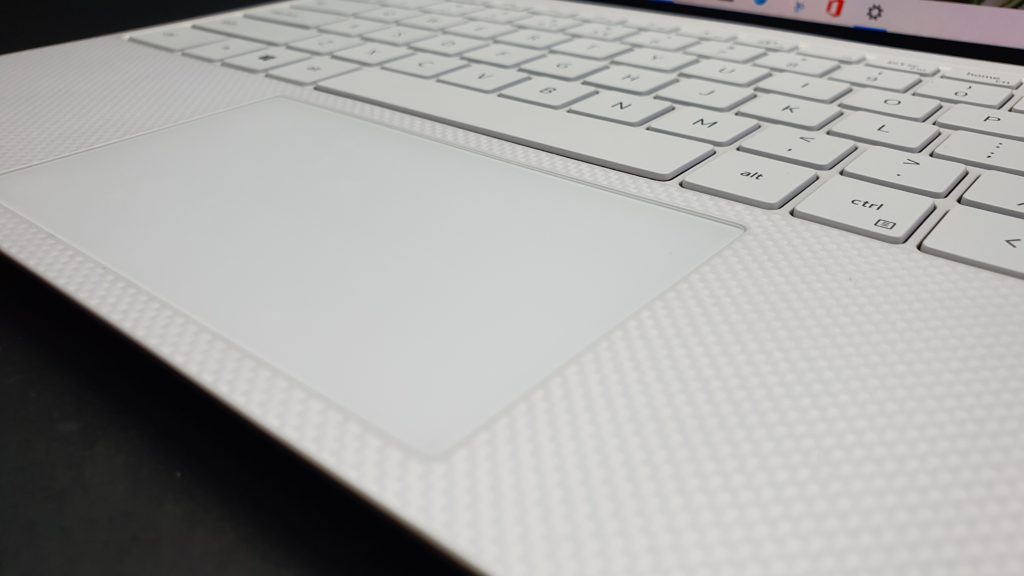 Overall build quality is excellent with a distinctive design that is unique to the XPS 13 series with its customary premium build quality that elevates it above the majority of chunky, plasticky lookalikes.

Under the hood, our test unit of the Dell XPS 13 9300 for Malaysia came with the following configuration:

These are the highest possible specifications that you can configure for the Malaysia market though there are some variants in other regions with more RAM, more storage and, of course, a much higher price tag.

On top of the better processor and increased storage, the latest generation of the XPS 13 benefits from improved Intel Iris Plus graphics over the stock Intel UHD Graphics solution. It still won’t match a laptop with a dedicated graphics card but it still offers enough pixel crunching grunt to tackle heavy spreadsheets, light video editing, photo editing and some retro gaming on low settings. That’ s not a knock against it though as this is exactly what the XPS 13 is designed to do though the addition of Iris Plus graphics makes it even more capable in its chosen role as a highly portable productivity platform. 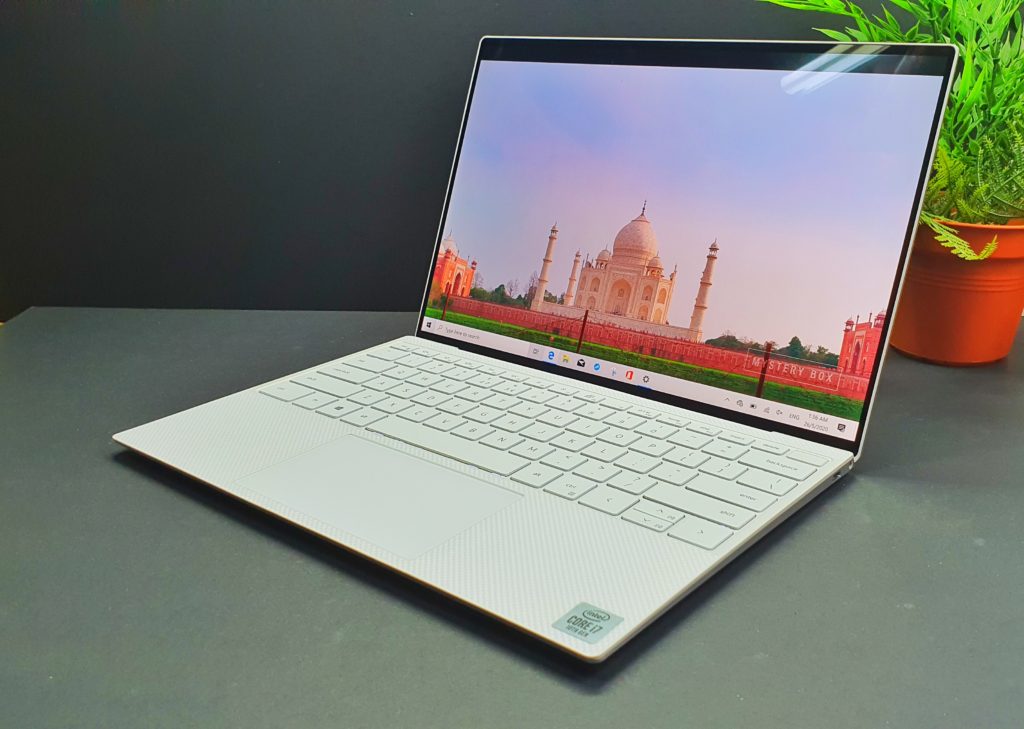 Of particular note for the XPS 13 9300 is the addition of a much faster Killer WiFi 6 AX1650 (802.11ax)  along with Bluetooth 5.0. Local Malaysia units also ship with the Microsoft Office Home & Student edition along with a 12-month subscription to the McAfee LifeSafe antivirus suite.

When dialled to the maximum performance setting, the XPS 13 9300 had the following performance benchmarks:

Overall benchmark scores are a modest margin ahead of last year’s model on account of the hardware that is mostly on account of the new 10th Gen Intel Ice Lake processor and Intel Iris Plus Graphics. You can check out the screencaps of the complete benchmarks below. 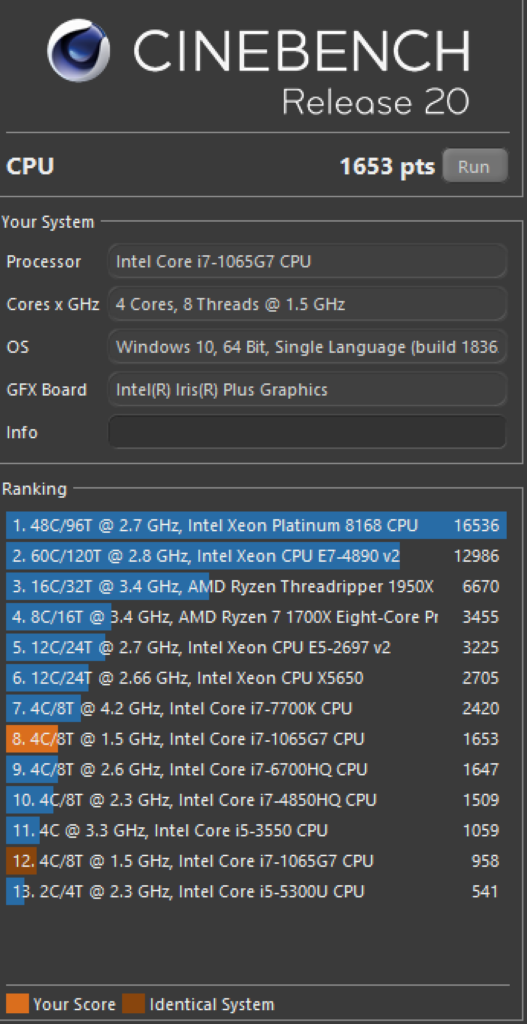 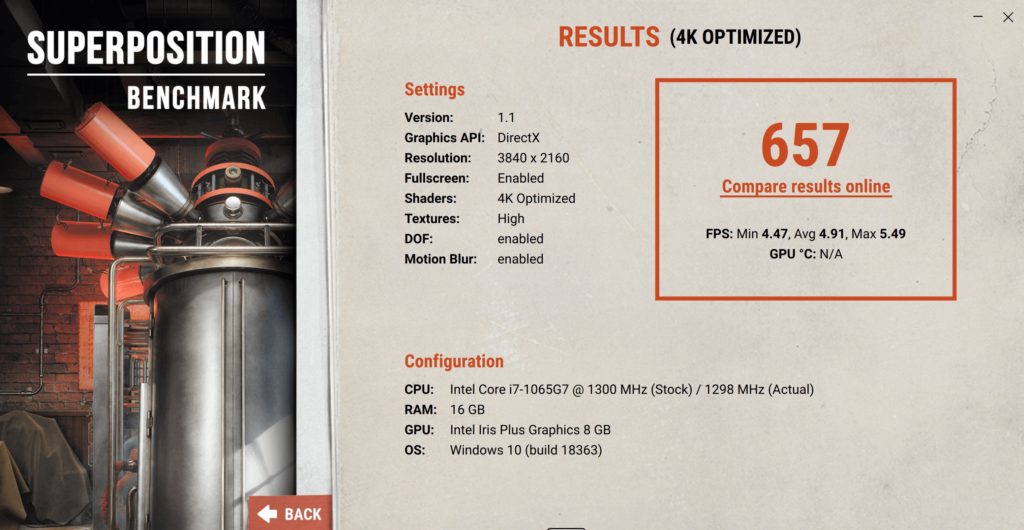 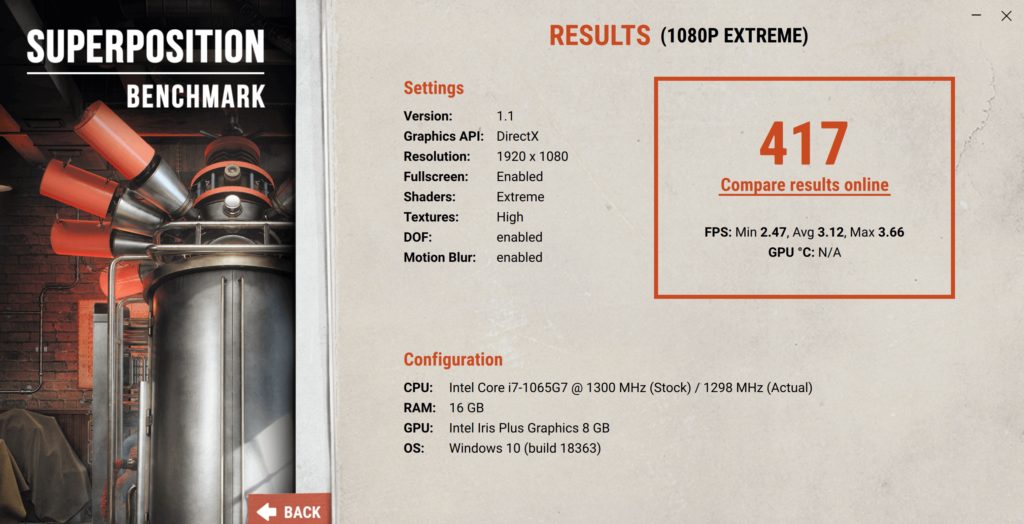 Under practical work conditions, the hardware on the XPS 13 9300 is more than sufficient to tackle almost any productivity related task and we managed to open two dozen tabs in Chrome without undue issues, handled paperwork on Google Docs and Open Office from written tracts to some modest spreadsheet work without any lag. Photo editing and light 1080P video editing wasn’t an issue as well on several open source video and photo editing apps. 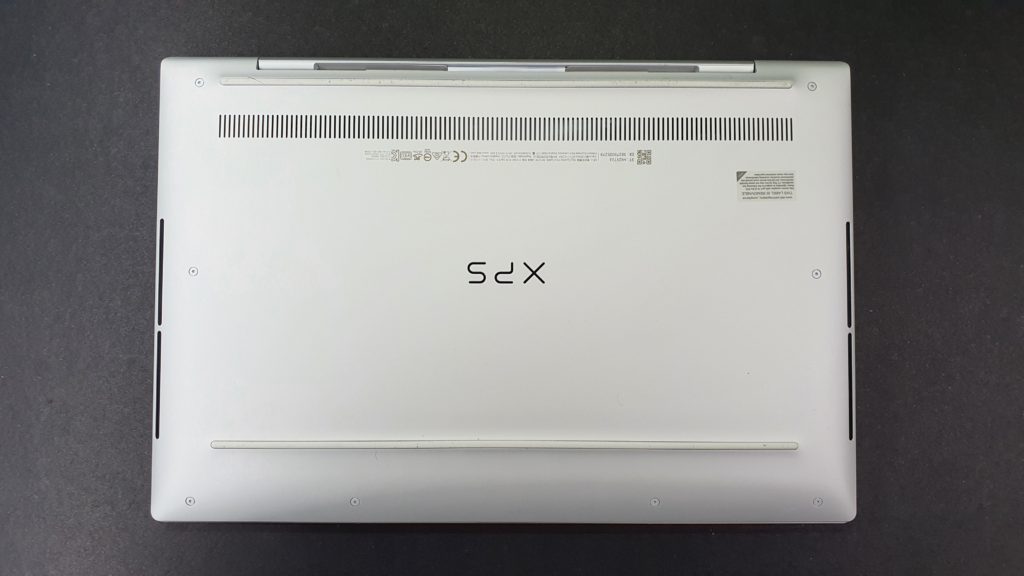 The luscious 4K touch display is excellent with superb colour rendition on account of its rated 100% DCI-P3 colour gamut and excellent brightness even under daylight conditions. The additional screen real estate is appreciated here and lets you comfortably compare two documents side by side or two browser windows without much trouble. The responsiveness of the display is excellent and adds a new alternative to interactivity versus the traditional touchpad and keyboard. 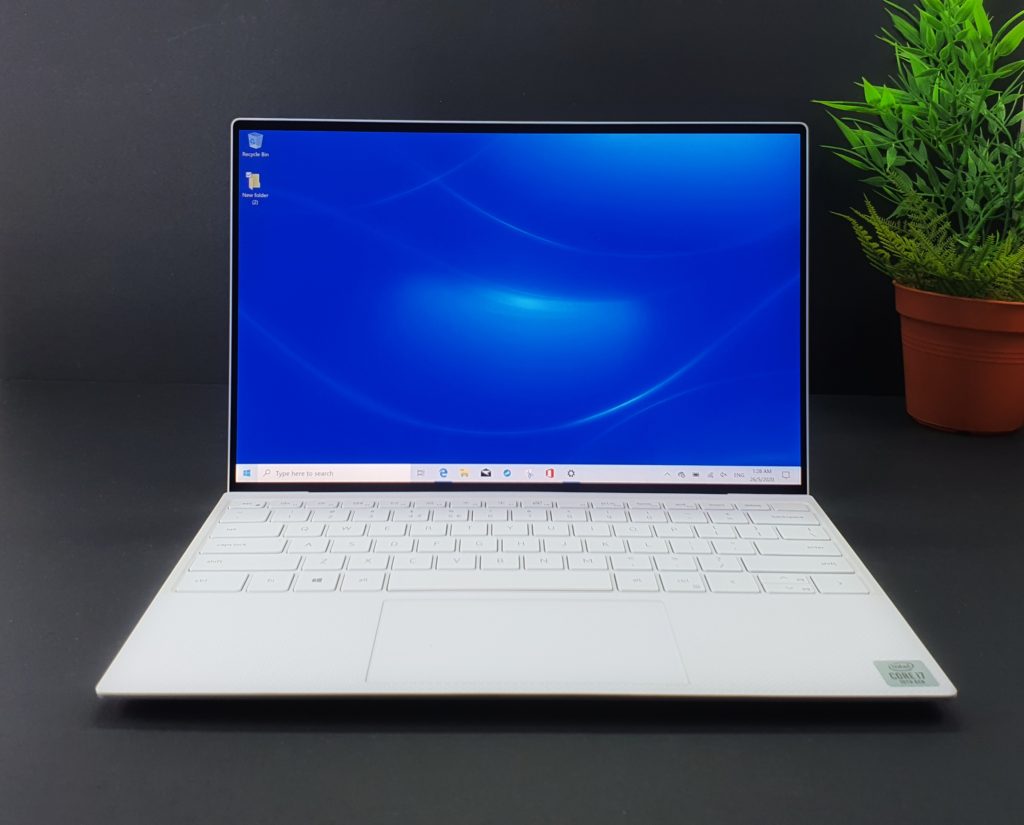 Audio performance on the built-in 2.5W stereo speakers is on par with last year’s model with similarly good range and sound staging on account of their Dell CinemaSound 2.0 and Waves MaxxAudio Pro software but isn’t appreciably improved but that’s not a bad thing. 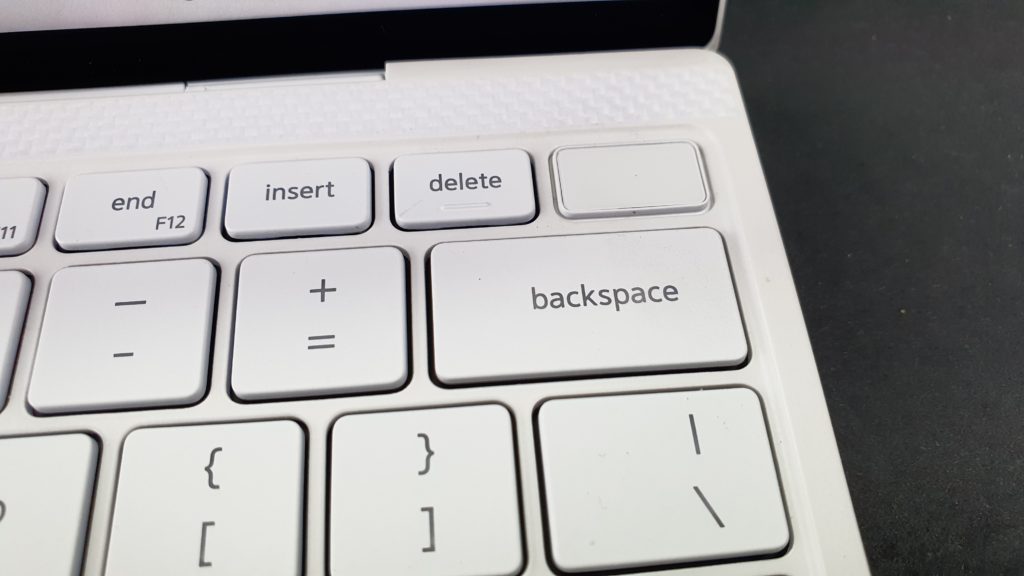 Thermals are excellent this time around. Dell’s GORE thermal insulation along with the dual fans and heat pipe help to shunt heat away from key areas like the keyboard, palm rests and touchpad towards the rear and bottom. Heat was appreciably kept to manageable levels with the underside getting a tad warm after several hours of heavy use but it’s not unmanageable. On normal workloads, it’s cool enough to use on your lap without cooking off. The aforementioned fans proved to be whisper quiet even under ultra performance mode and intensive loads.

The revamped keyboard has 9% larger keys and a 17% larger touchpad over last year’s model. The increased size paid dividends especially to long-term typing comfort, speed and accuracy and we were able to get a decent 120wpm on average with the remastered keyboard. 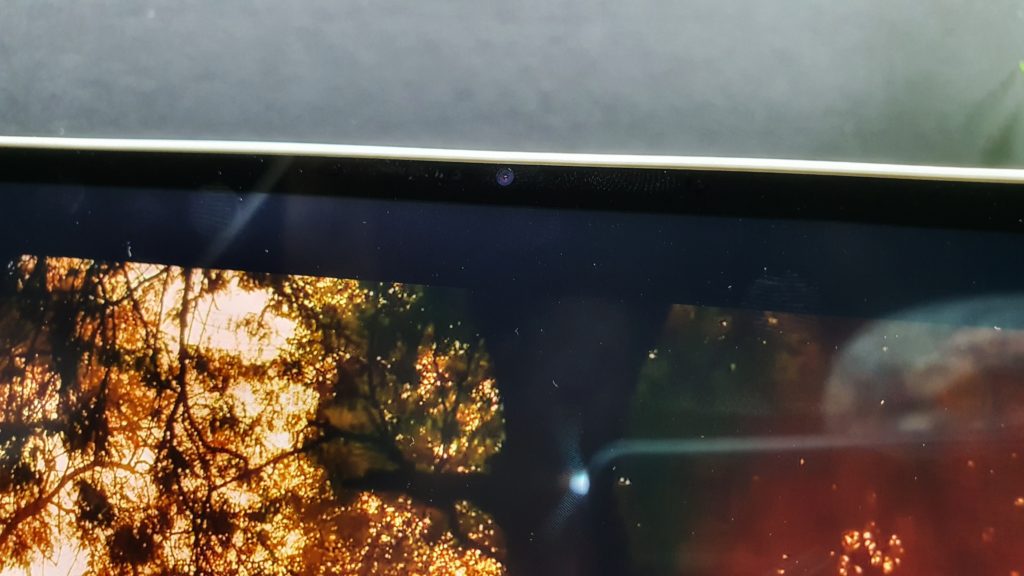 The most critical feature for the work from home crowd – teleconferencing is fortunately executed in a competent fashion here. The 720P webcam is serviceable while the bundled mike offered sufficiently clear acoustics for voice calls across Microsoft Teams, Zoom and Webex.

While it won’t beat a dedicated separate webcam or mike, having it all in a compact package with the webcam in the right position is still a bonus. Hopefully in future iterations the XPS 13 gets a better mike and higher resolution webcam, seeing the importance in telecommuting and video calls these days.

In terms of battery life, the new XPS 13 9300 offered a solid 8 hours of battery life off the 52WHr battery with average screen brightness and a modest workload of web browsing, emails and half a dozen open browsers and WiFi.

Your mileage will vary of course depending on how intensive you run it. At maximum screen brightness and resolution along with a heavy workload plus tweaking it to high Performance mode resulted in just under six hours or so of battery life. It’s on par with the competition and gives you enough endurance to last a work day out in the field.

At a princely RM8,498, the Dell XPS 13 9300 for 2020 with the highest specced configuration is not cheap. But what you get for your money is an immaculately crafted chassis that is as distinctive as it is beautiful, a gorgeous four-sided Infinity Edge display, a revamped and improved keyboard plus solid performance all around. If cash is no object, the XPS 13 is one of, if not the best 13-inch Windows ultraportable that money can buy.

What we liked Outstanding build quality and design, excellent UHD+ display, comfy keyboard, good battery life
What we didn’t Not cheap, more ports would have been nice
We say The new Dell XPS 13 for 2020 is a superb ultrabook in every respect from its immaculately machined chassis to its breathtakingly 4K beautiful touch display and powerful hardware. It doesn’t come cheap but that’s the price you pay for uncompromising excellence for the Bentley of ultraportables.