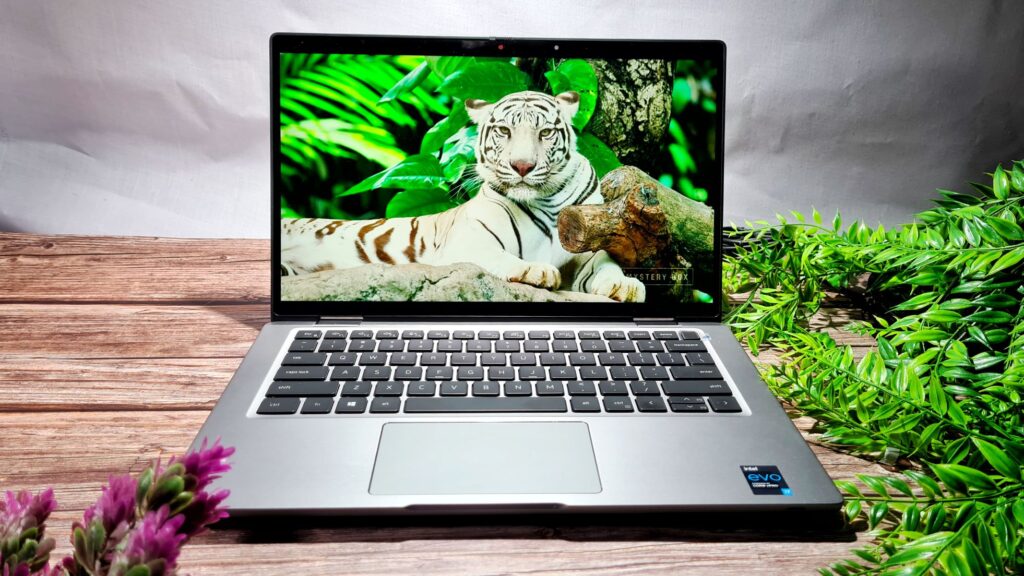 Initially announced during CES 2021, the Dell Latitude 7320 2-in-1 is just a step short of the premium best-in-class Latitude 9000 series laptops, with both intended for corporate executives and captains of industry. 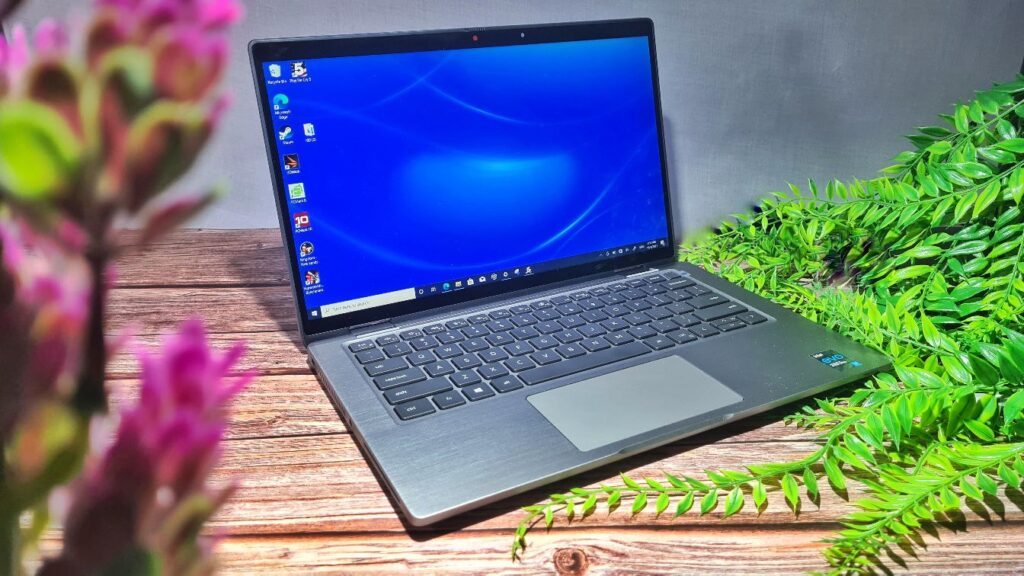 Where it earns its convertible designation is the inclusion of a pair of double hinges that allow you to flip the touch display around and about into the usual tablet, tent and display modes. A conventional clamshell laptop design Latitude 7320 is also available for traditionalists.

Externally, the Latitude 7320 2-in-1 looks striking indeed with an all-metal brushed aluminium top lid that feels and looks exceptionally premium indeed. The brushed metal finish repels fingerprints nicely with the iconic Dell logo on the top lid that is engraved in shiny silver. 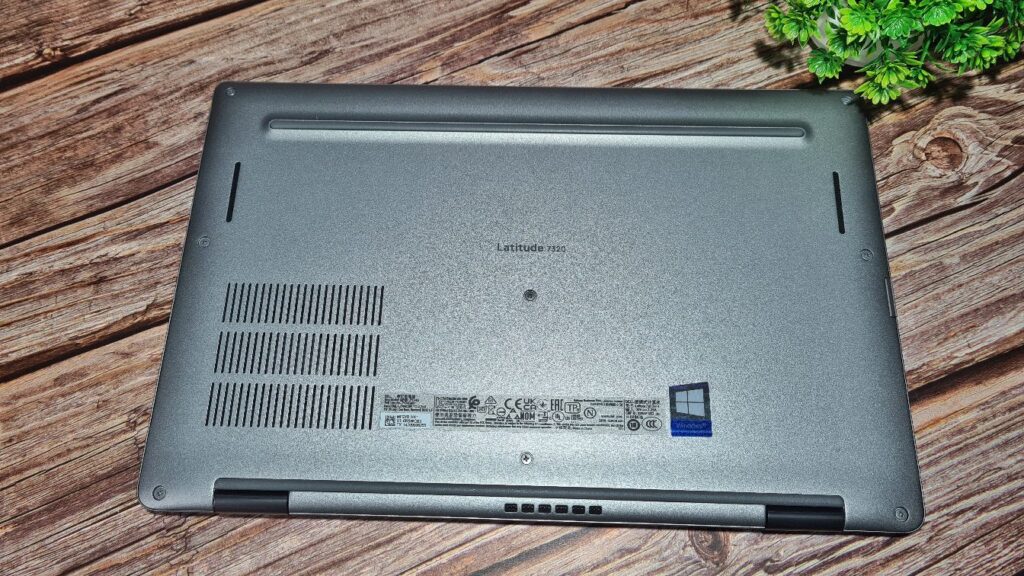 Where it makes a concession to affordability is in its underside that is finished in polycarbonate with two grilles for the downward-firing speakers. It also has a raised pair of rubber feet that stretches along most of the length of the underside to offer some measure of ventilation and friction lest it slide off a table into oblivion..

In keeping with its aspirations as a corporate workhorse, the laptop packs a full suite of connectivity options that include WiFi 6 (802.11ax), Bluetooth 5.1 as well as a Qualcomm Snapdragon X20 LTE CAT 9 modem. One thing to note is that the laptop’s connection is relegated to 4G LTE. 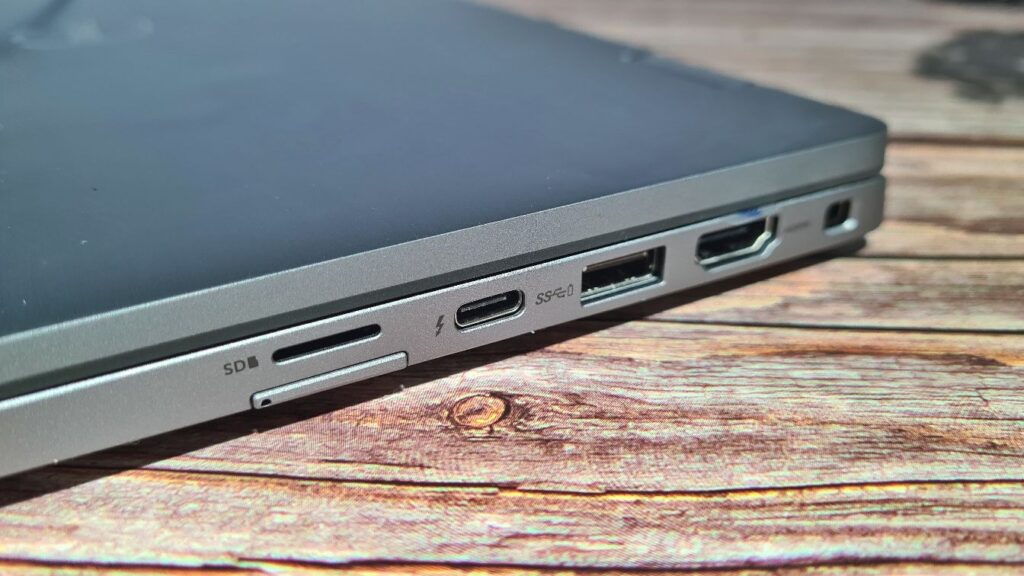 On the right side you’re getting a microSD card reader, a SIM card tray, a Thunderbolt 4 USB-C port, a USB-A 3.2 Gen 1 port with PowerShare support and a HDMI 2.0 port.

The left side is a bit sparser but retains a similar Thunderbolt 4 USB-C port, an audio jack and, in the case of our Latitude 7320 2-in-1 review sample, a smartcard reader. 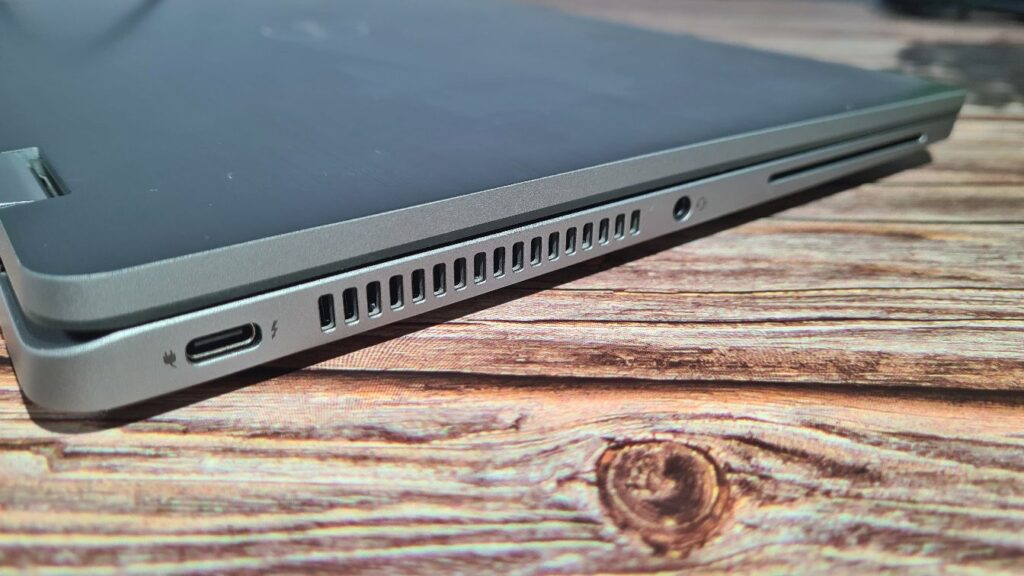 The aforementioned double hinges are of superior build quality and are balanced just right, allowing you to open it one handed. Once opened, the hinges are sturdy indeed without any wobble.

In order to make it more secure, the laptop stays shut with magnets and closes with a satisfying click. Opening it requires just a little bit of a stronger nudge than usual before the magnet releases its grip. 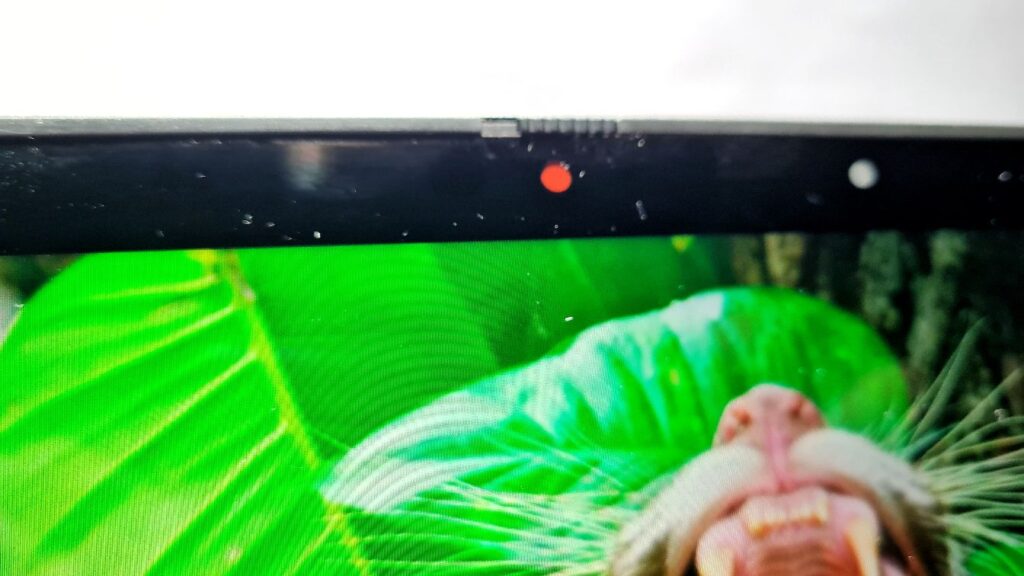 The centerpiece of the convertible is a 13.3-inch Full HD touchscreen display with thin side bezels though the top and bottom bezels are a bit on the thick side. Up top, the 7320 2-in-1 hosts a HD webcam that notably comes with a physical shutter that  you can slide shut for privacy. 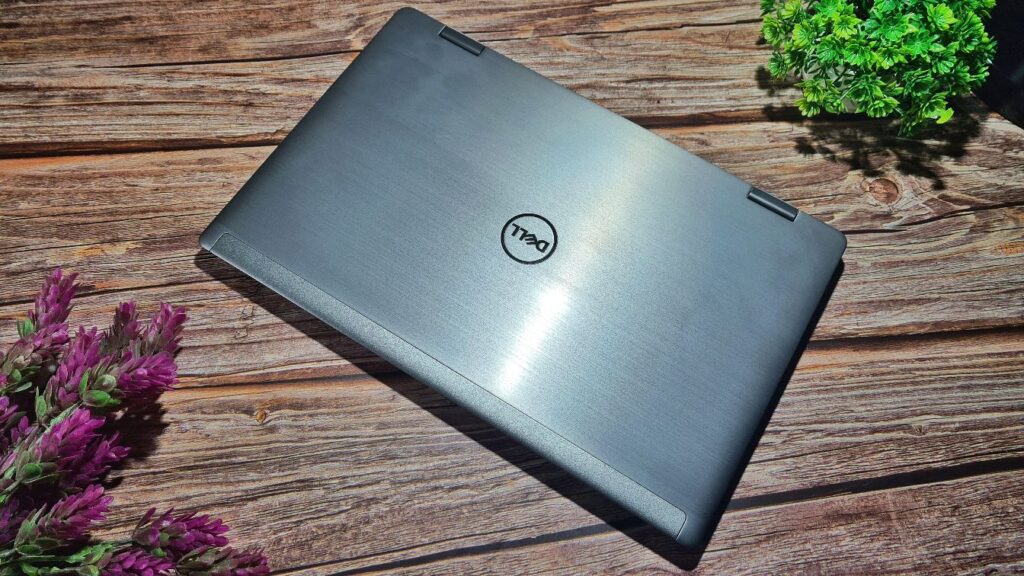 The base of the laptop hosts a fairly compact white LED backlit keyboard that integrates a power button that doubles as a fingerprint reader for unlocking the laptop using Windows Hello. 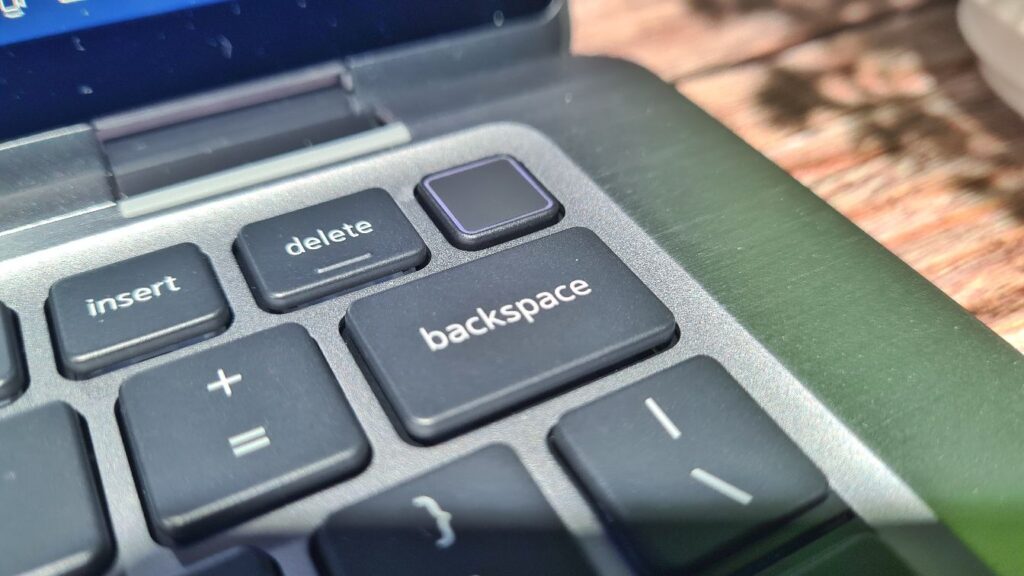 Overall build quality for the Latitude 7320 2-in-1 is excellent and bar the polycarbonate underside, it’s a very premium looking convertible indeed though it’s a bit on the heavy side at 1.39kg. The benefits of having a convertible far outweigh its slight increase in weight by a significant margin.

In terms of hardware, our dell Latitude 7320 2-in-1 review sample came with the following specifications:

Under the hood, Dell has packed an impressive array of specifications that befits a premium business ultraportable. You get an 11th Gen Intel Core i7-1165G7 processor paired with 16GB of non-expandable DDR4 RAM and a 512GB SSD,  Iris XE graphics, WiFi 6 connectivity and a generously sized 65Whr battery that can be charged via any of the USB-C ports.

It’s also one of the rare laptops to have a SIM card slot so that you needn’t have to tether off your phone’s data connection on the go. It also has eSIM support too. Collectively, all this hardware enables the Latitude 7320 2-in-1 to earn an vaunted Intel Evo certification. 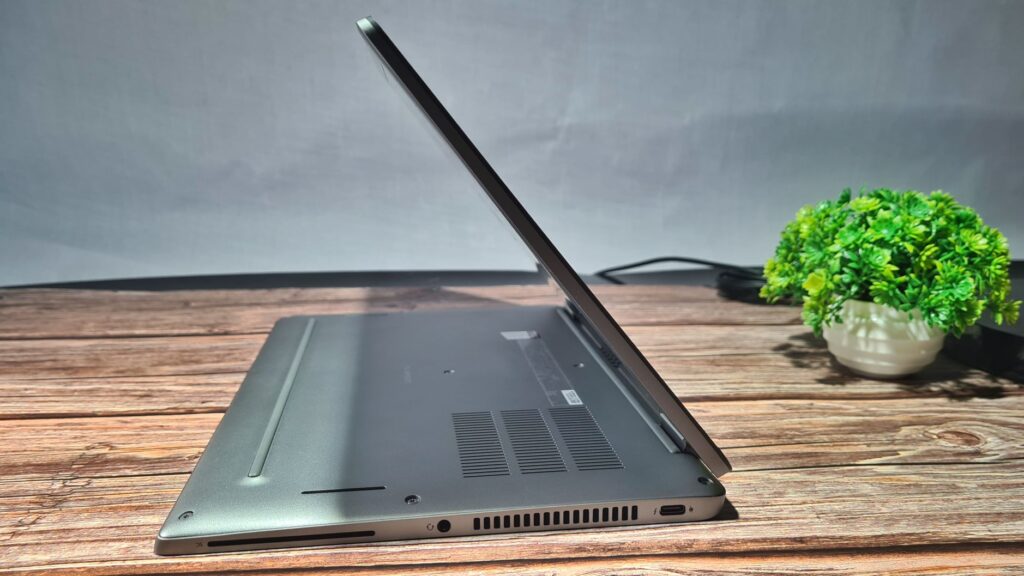 For the uninitiated, this is a series of requirements by Intel that certifies that a laptop fulfills criteria that include at least 9 hours of usage on a single charge, has biometric login for security and a sub-one second wake time, just to name some of the more notable requirements. This is easily denoted by an Intel Evo sticker on the keyboard. 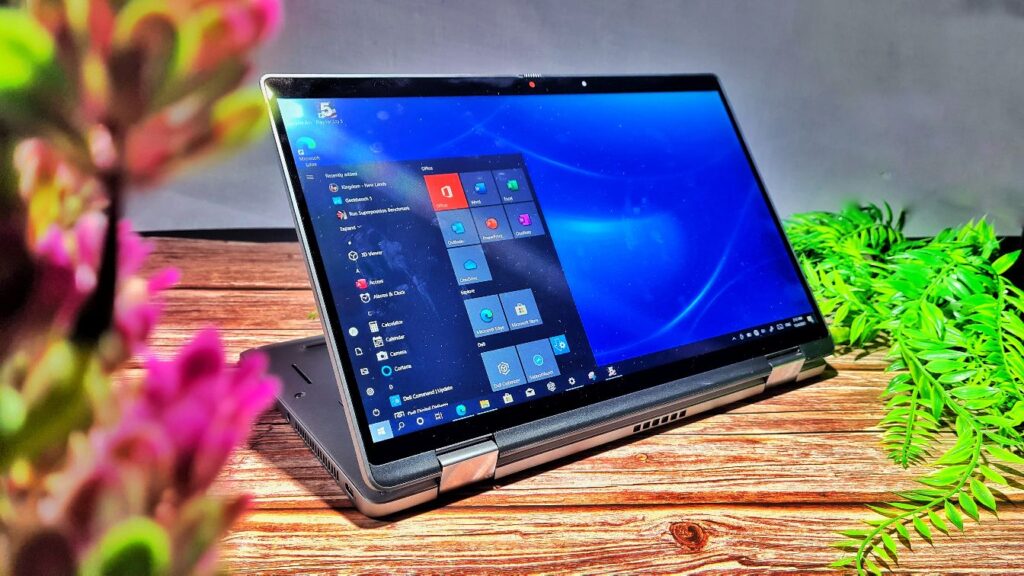 Just having Intel Evo certification would already be considered a fait accompli by other laptop vendors but Dell goes a step further with a host of unique features like their Dell Optimizer application that leverages machine learning to optimise performance, battery life and the overall user experience.

Features present on the Latitude 7320 2-in-1 include the fast Express Sign-in which locks your laptop when you stay away from it and unlocks it by identifying your mug via an infrared camera; Intelligent Audio that cleans up audio when doing voice calls; and smart ExpressCharge that dynamically manages power settings to ensure longer battery life. 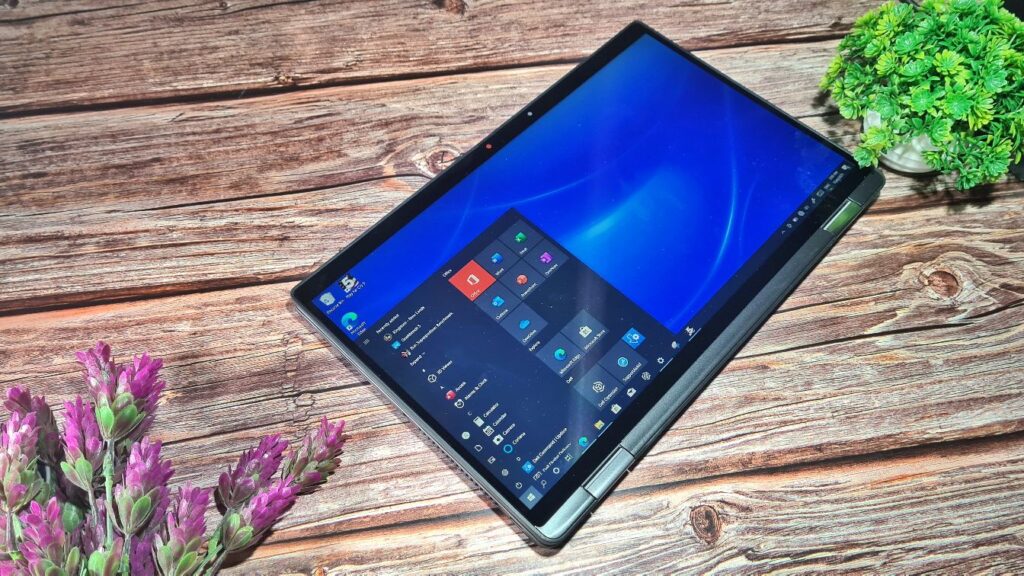 All this without the need for direct intervention by users (or the IT department) which makes it a delight for remote workers and users on the go.

The hardware packed into the Latitude 7320 2-in-1 review sample we had gives it a mission profile ideal for general productivity – emails, paperwork, web browsing, light photo editing and the like.

With Dell Optimiser running in the background, the laptop plugged in and settings set to high Performance mode, I got the following:.

The last Intel Evo capable laptop with approximately similar specifications was the ASUS ZenBook Duo 14 UX482 which had an 11th Gen i7 1165G7 CPU and Iris XE graphics though it differs as it has double the amount of RAM at 32GB which tends to skew results somewhat.

A somewhat closer but lesser match is the ASUS ZenBook 14 UX425EA business laptop that has the same processor but only had 8GB RAM.

Even so, the synthetic benchmarks in our Latitude 7320 2-in-1 review are excellent and well within official parameters, which was borne out through practical field tests under work loads expected of a business ultraportable. The underside and rear portion of the laptop towards the hinges does get a bit warm but it remains pleasantly quiet under heavy loads. 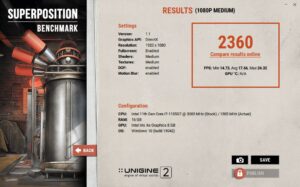 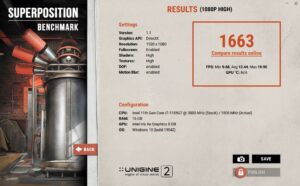 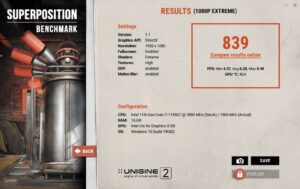 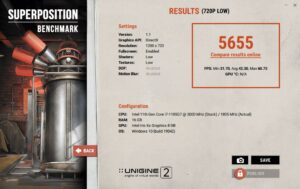 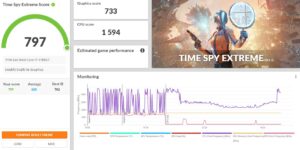 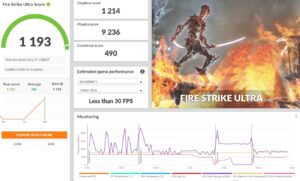 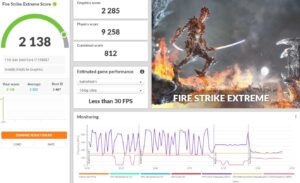 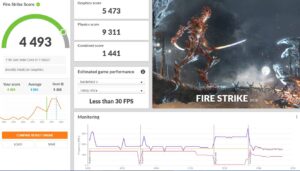 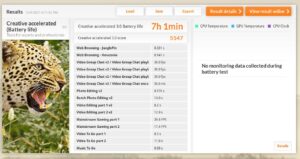 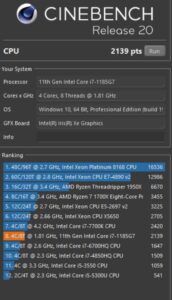 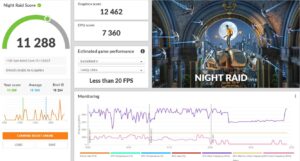 It woke up in seconds and it blazed through a practical computing workload which involved emails, Google Docs, Open Office, light photo editing and web browsing on Chrome with two dozen open browser tabs.

The laptop was also capable of some modest gaming as well and it was capable of running through Far Cry 5 on 1080p at low settings at a fair 26fps should you want to do something recreational in between crunching time sheets and quarterly reports. Simpler and older games like Kingdom New Lands will run smoothly without issues.

The provided touchscreen panel on the Latitude 7320 2-in-1 is fast and responsive with a good level of detail and colour rendition though it’s not suited for gaming as it’s capped at a 60Hz refresh rate. 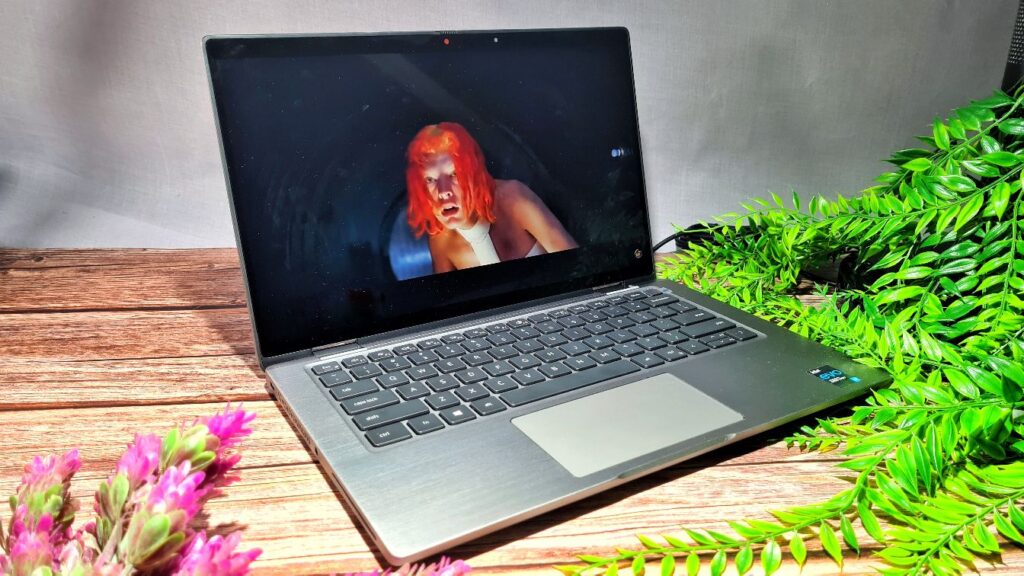 With a rated 250 nits brightness, it’s sufficient for indoors use but is rather dim when used outdoors though odds are the closest you’ll likely be exposed to sunlight is in the departure lounge at the airport or more likely these days indoors next to a window so it’s not a huge deal breaker.

Unlike many recent ultraportables that have a shortage of ports, the Latitude 7320 2-in-1 actually covers all the bases and its HDMI port and USB-A port comes in handy for reading flash drives and hooking up to external displays. The provided 3.5mm audio jack also means that you’re able to use it with wired headphones. 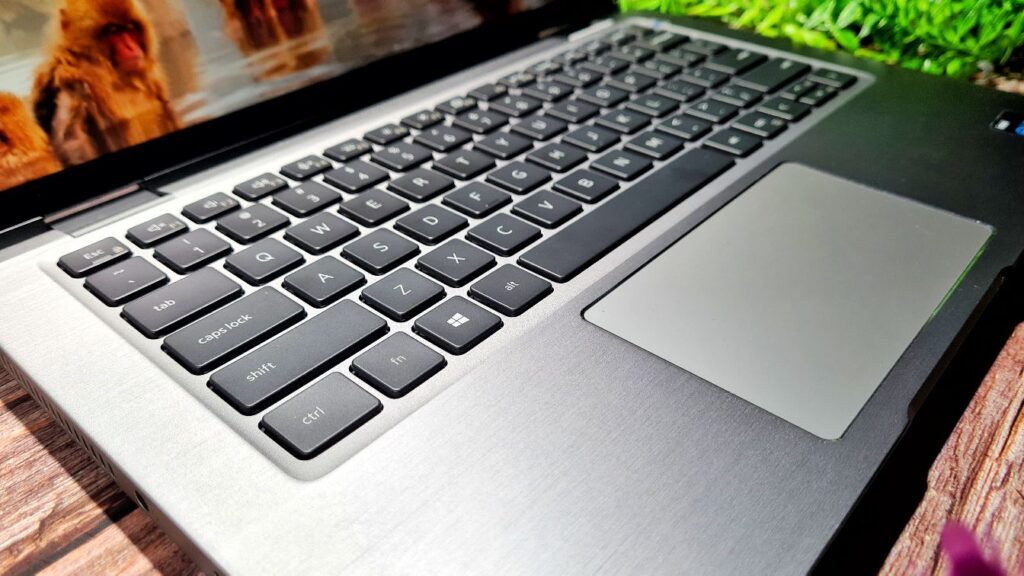 The provided keyboard is excellent and while it’s a bit on the compact side, the key travel makes it ideal for touch typing and the provided touchpad, albeit small, is swift and responsive which is expected of Dell’s premier line of ultraportables. 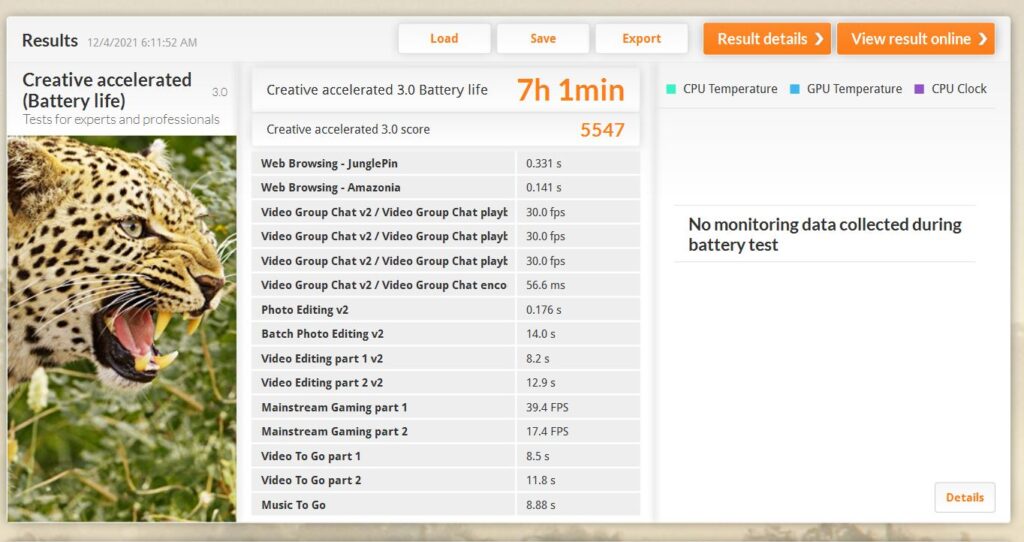 When subjected to a heavy creative benchmark workload in PCMark 8, it managed a respectable 7 plus hours but in a more realistic work setting with mostly paperwork, video and web browsing, it managed to last a very respectable 10 plus hours which is easily enough to last through the average work day off its 65Wh battery..

The unique Dell Optimizer feature baked into the Latitude 7320 2-in-1 and selected premium laptops in Dell’s line-up is unique to the brand and delivers tangible benefits over the long term. 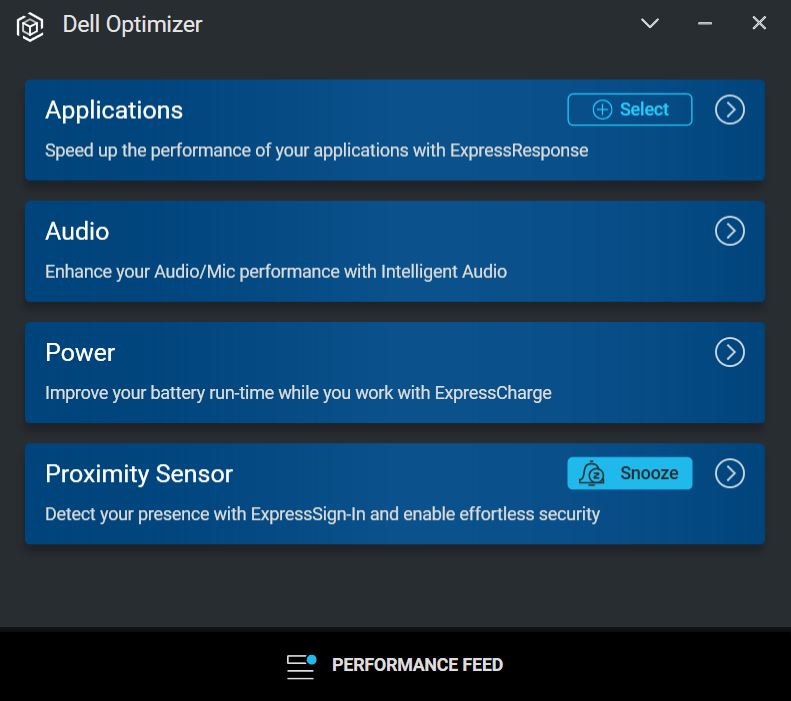 Some of its most powerful features take some time to kick in though as it needs to learn your usage patterns. The Power mode aims to extend your battery life and keep your battery charge cycles and health optimised. 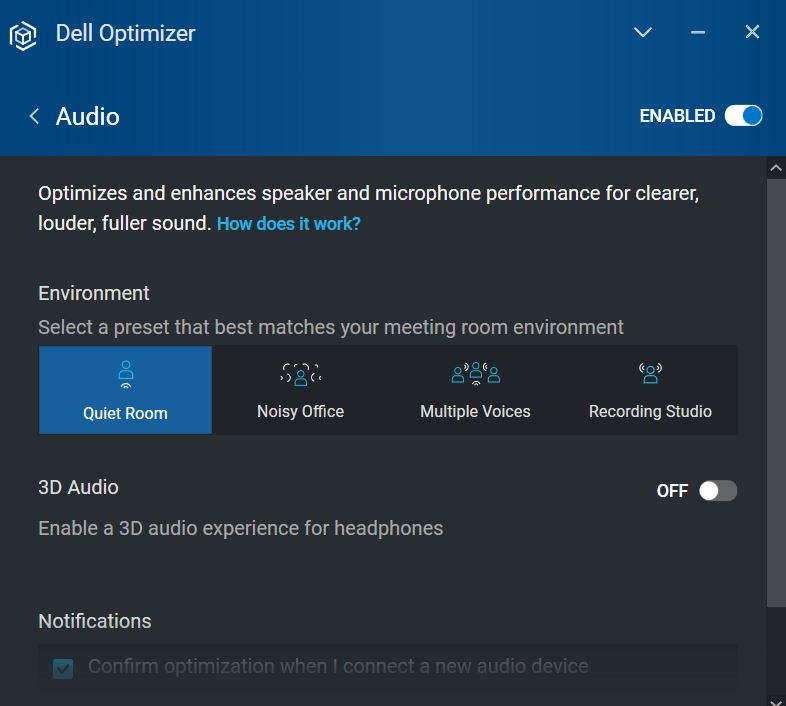 Dell Optimizer is also able to ensure that up to 5 selected applications are prioritised for fast load up and higher priority to system resources so that your most frequently used apps are within easy reach at all times and fire up faster and work smoother.

On its own merits, the Dell Latitude 7320 2-in-1 is a superbly constructed business convertible that has the battery life to match the demanding schedules of a corporate go-getter and enough performance to tackle any work related task with deft aplomb.

It doesn’t exactly come cheap at its current price tag of RM8,044.13, but you get a tightly integrated offering that’s built to a superior standard of quality over almost anything else you see in general circulation. If you’re looking for a practical status symbol to show you’ve made it to the upper echelons of power, this is an ideal way to do so. 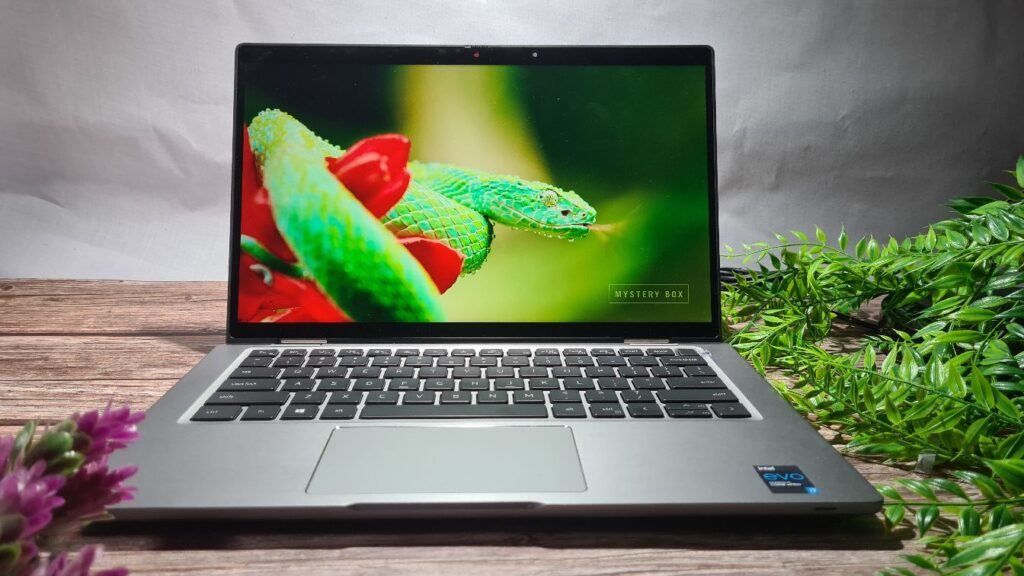