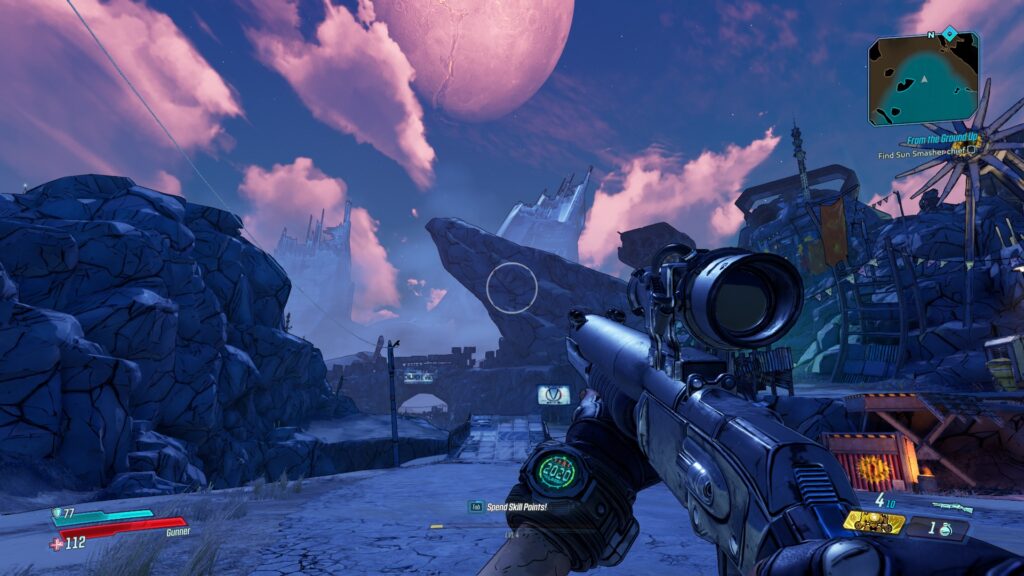 The Borderlands series has always been known for its hilariously off-the-wall humour, unique art style and, above all, for defining a completely new genre – the first person shoot-and-loot. Imagine Diablo from a first person perspective with fully automatic weapons and you get Borderlands. This latest outing, Borderlands 3, is the latest installment in the franchise and expands on this formula in new ways while keeping it sufficiently familiar for old-hands of the franchise. 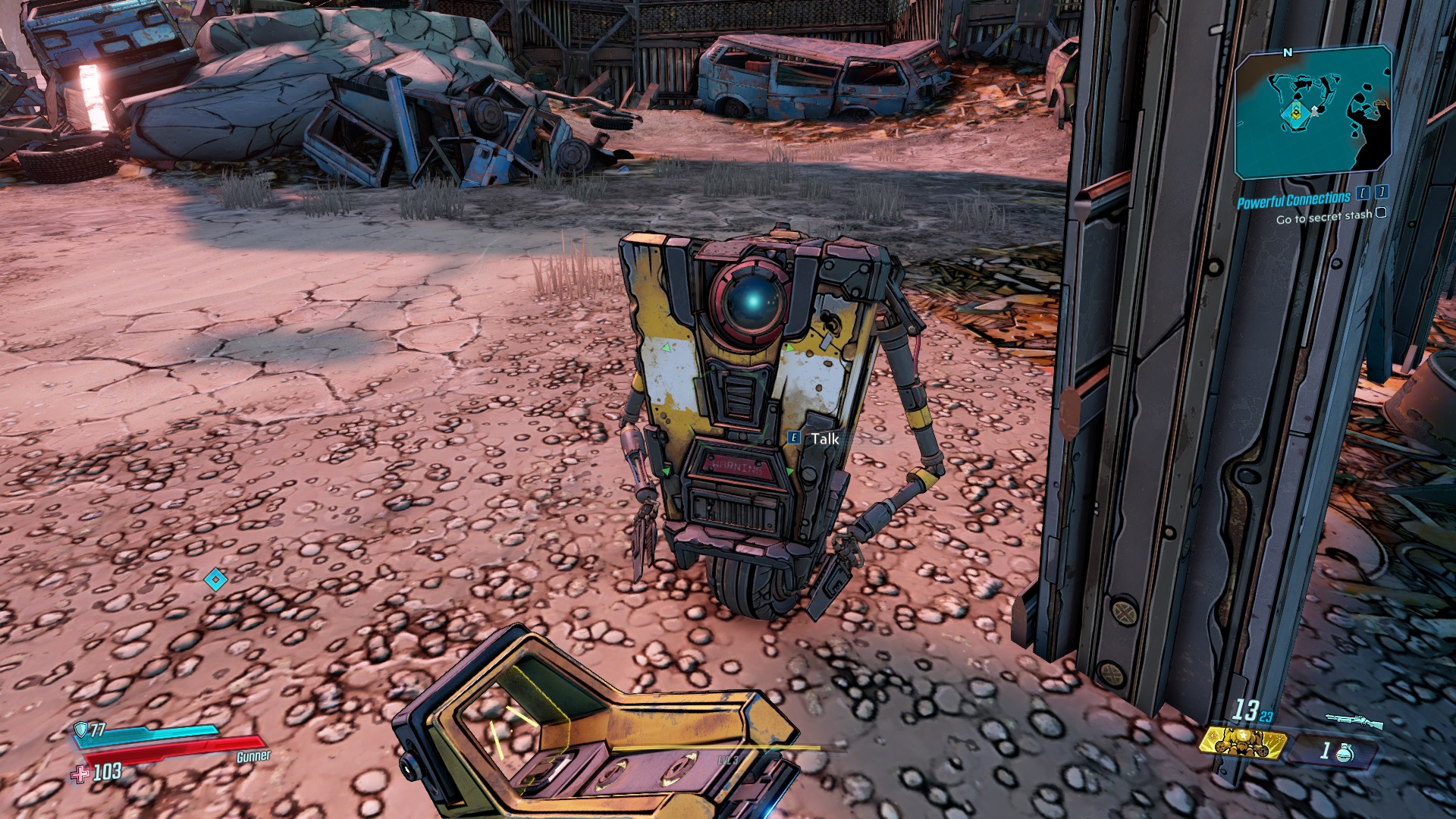 For the uninitiated, the Borderlands series primarily takes place on the planet Pandora, a chaotic former penal world that’s chock full of powerful alien artefacts as well as the mostly insane and homicidal former inmates who have turned to banditry to survive.

This ramshackle world sees Vault Hunters (that’s you) puttering about thwarting the plans of a host of bad guys aplenty who are out seeking ancient alien vaults for their own gains. In Borderlands 2, you thwarted the plans of a rather barmy Handsome Jack an egomaniac with a private army and a megacorporation of his own. 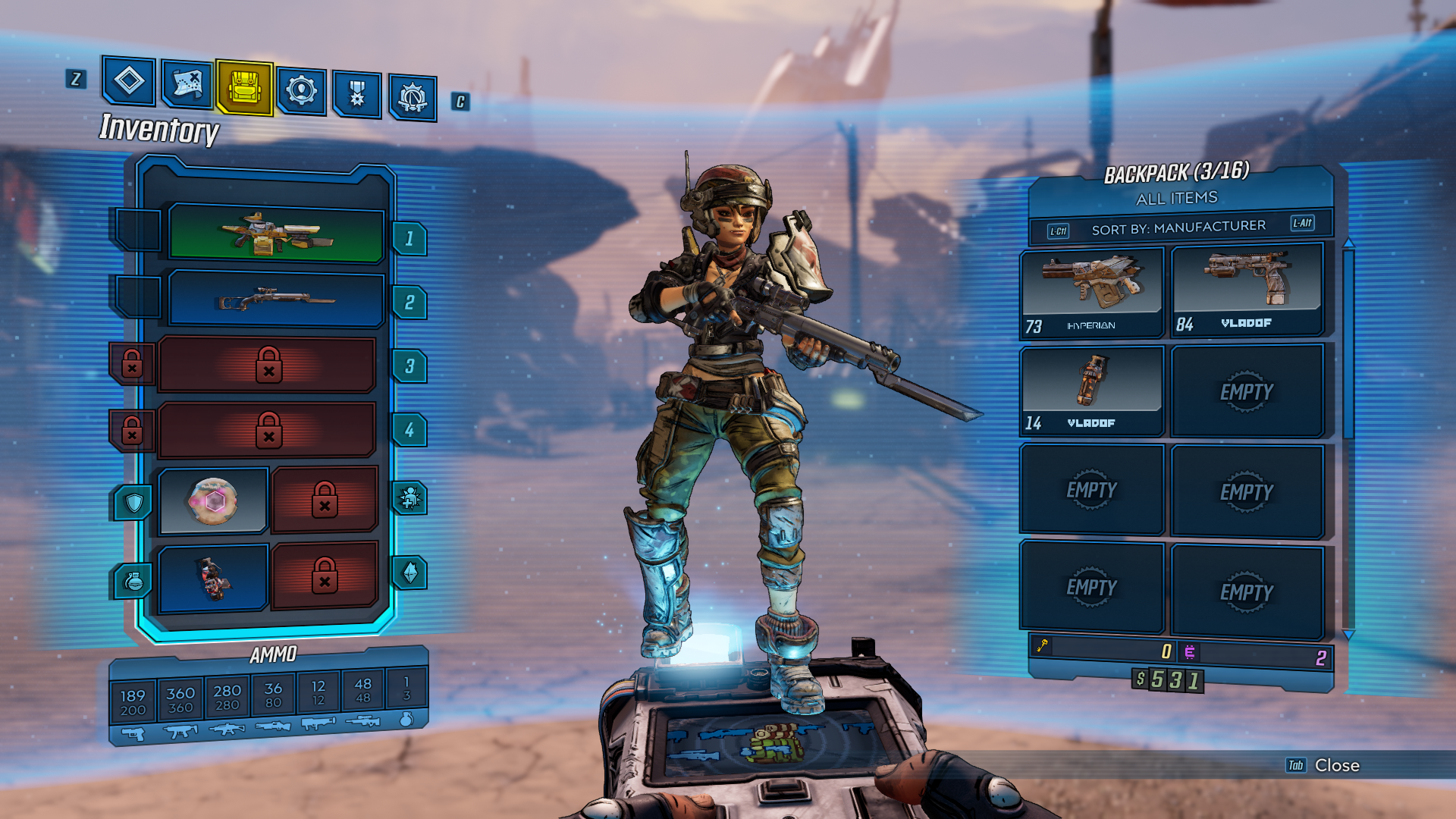 In Borderlands 3, you take on a new villain, or rather two of them, a pair of murderous live-streaming televangelists called the Calypso Twins who have unified all of Pandora’s usually bickering bandits into one cult to find even more of these mysterious vaults which have the usual Macguffins for unbridled power. Naturally, you as a new generation of Vault Hunters have to get stuck in to save the day.

Every Borderlands game has you playing as one character class from out of four possible choices each of which offers a different play style.

This time around, you’re given the choice of an ex-megacorporate soldier with her own suit of powered armour called Moze the Gunner, a corporate hitman called Zane who can summon digital doppelgangers and support drones on demand, FL4K the Beastmaster, a humanoid robot with cybernetic pets and Amara, a Siren who has miraculous powers that revolve around thumping things flat with a series of giant phantom arms that offer massive melee damage along with other powers for crowd control.

While each of these characters has a basic power with a cooldown and a unique play style, you’re able to further customise them via a series of skill trees by investing points earned from levelling up after completing quests and killing enemies. This enables you to create unique play style variations of each character and there’s a veritable cornucopia of variables that allow you to mix and match them to suit whatever style you want, even from characters that aren’t exactly optimised for it. 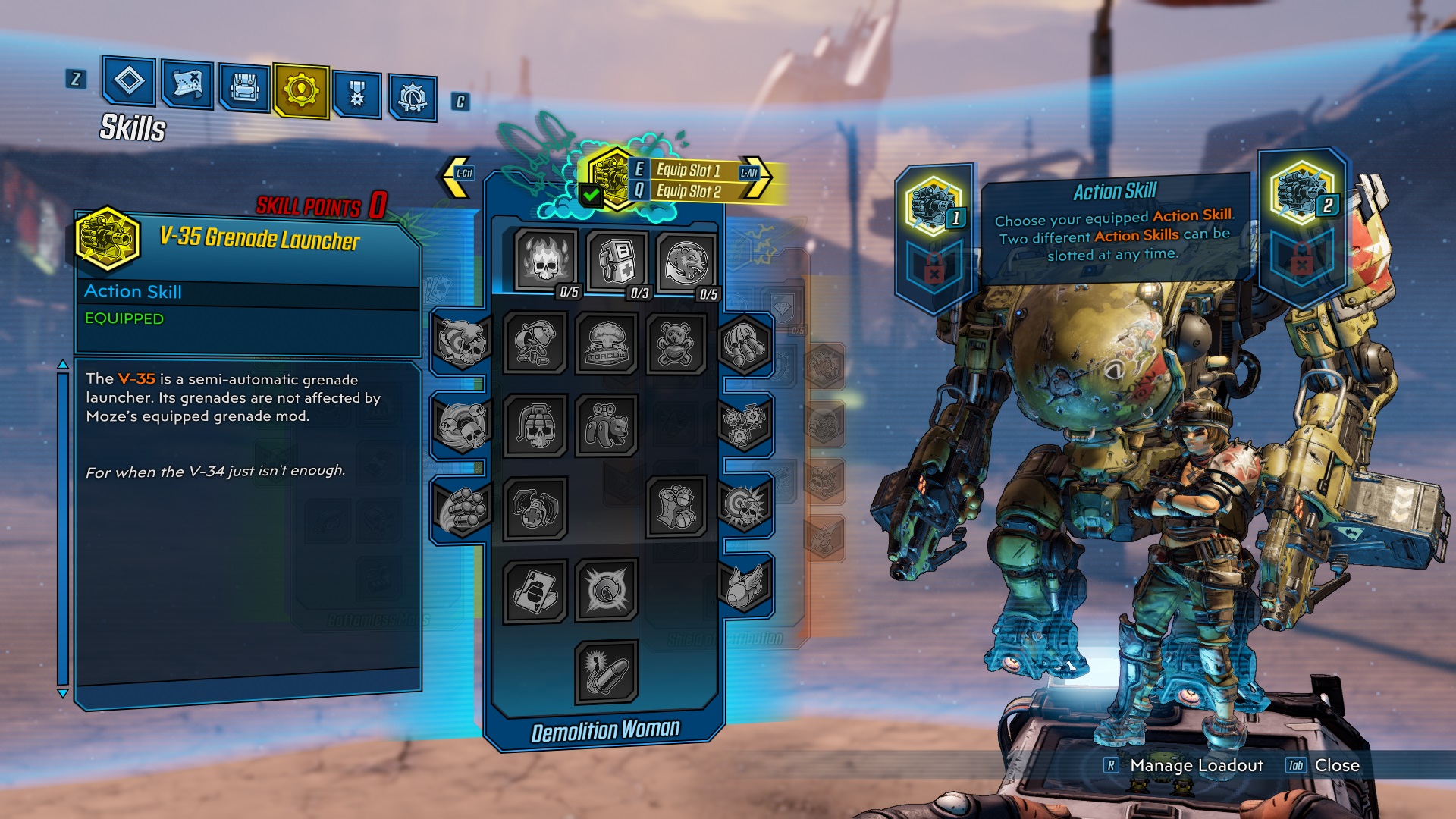 An example is kitting Moze, who is primarily a classic ranged combat character with a series of melee upgrades for her powered armour suit so that you have a rocket-fist firing killing machine that can pulp enemies into goo on demand. If you’re not happy with your invested skill points, it’s a simple matter to reallocate them entirely at any point in the game for free so that you’re not painted into a corner.

It’s a relatively simple move on the part of the writers but it jumpstarts your emotional attachment to the game if you’ve played any of the prior sequels and makes the whole story seem a lot richer.

You get to see some of the quirky, wonderful characters from the first and second game that have become familiar faces like Lilith the Siren and Brick the Berserker as well as background NPCs that have taken on a life of their own like the eponymous Claptrap, Mad Moxxi the bartender and Tina the explosives expert who is absolutely completely stark-raving insane and who delivers some of the funniest dialogue in the game. 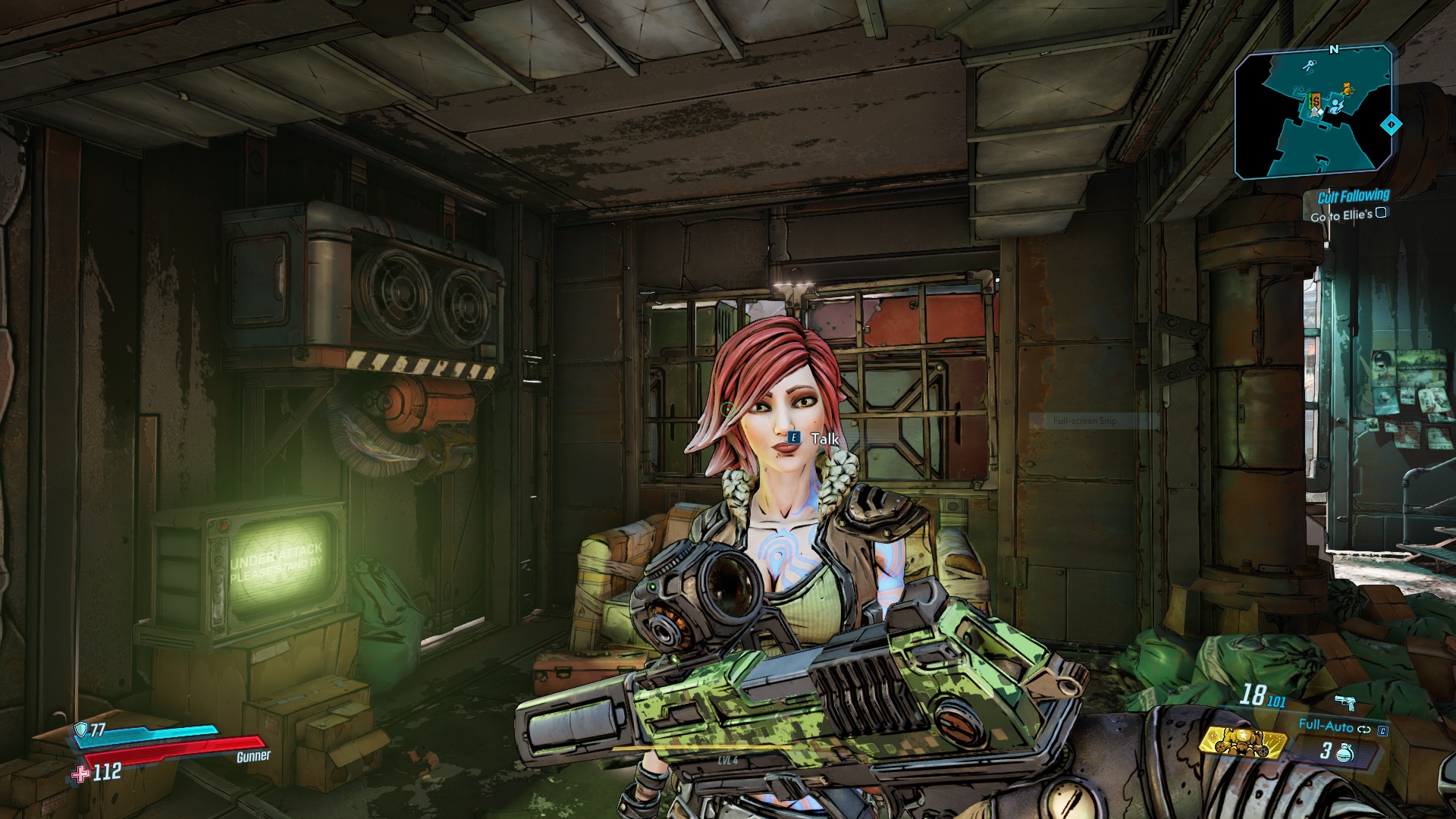 The plot is straightforward and there aren’t many narrative twists with the chief antagonists in the game acting like a superpowered pair of brats with entitlement issues but in a game like Borderlands 3, the plot mostly acts as a scaffold for you to shoot up a ton of hostiles so it’s not that big an issue.

The most interesting feature on hand in Borderlands 3 is that the game expands to worlds beyond Pandora and you’re now able to explore other planets, each of which has unique environments as part of the campaign which is quite a pleasing leap forward seeing as the last two games were just stuck on one podunk planet. All the usual biomes are here – swamps, arctic tundras, deserts and the like – just on other planets – but it’s still a kick out of just being stuck on Pandora.

Quests aside, the core aspects of the Borderlands 3 gameplay experience revolve around various permutations of FedEx quests, shooting everything in sight and dealing with a boss or two though you do get the option of riding a variety of armed vehicles to traverse large distances, all liberally seasoned with the series’ trademark puerile humour.

Enemies come in a variety of unique permutations, each requiring you to factor in and deal with them so that every firefight isn’t a boring shooting gallery. Some enemies will rush you. Others will take cover and plink away at you and others will attempt to buff or help their colleagues take you out. Later on in the game, enemies will have elemental types and shields that you have to deal with which make things more interesting.

Naturally harsh language isn’t going to work in the game and you’ll have to shoot your way out of most problems. This is where Borderlands shines as you have over a billion possible permutations and likely more of randomly generated guns for the taking.

All these guns each have a different manufacturer, which affects its base stats, a type be it a submachine gun, rifle or whatnot and also a rarity from common to legendary. Mixing and matching all these features together gets you a weapon and there’s a mind boggling array of possibilities like sniper shotguns or rocket pistols and everything in between. Much of the motivation in the game, plot aside, is to farm and hunt for these rare weapons and you’ll likely be hunting down and farming many of the ingame missions to get the best loot available.

While the main storyline missions take up most of the game, there’s still a massive array of side-quests as well as a host of free DLC including the recently released free Maliwan Takedown content as a post-campaign mission. All this takes a good thirty plus hours of gameplay which is generous by current standards. While hardcore gamers can likely power through this in shorter amounts of time, casual gamers with day jobs will appreciate the fact that each of the missions or sidequests can be completed in about an hour, allowing you to play in bitesized portions between adulting duties.

In terms of replayability, the game does offer increasing difficulty levels on subsequent replays but beyond that, the plot remains the same. Luckily, you have the option of traversing the campaign in up to four-player coop mode which adds a significant level of fun to the proceedings and makes what would have been a sterile affair into something hilarious.

Working in Borderlands 3’s favour is Gearbox’s commitment to a constant trickle of ingame content means that you’ll likely be enjoying your investment for a long time to come. Borderlands 2 had a ton of content up until the day Borderlands 3 launched so odds are good that you’ll be enjoying this game for several years down the road.

It’s not the most intellectually demanding game but Borderlands 3 a well rehearsed and solid gameplay loop, a constant array of loot to strive for and a ton of charm.

What we liked Fresh storyline with the same signature irreverent humour, new gameplay mechanics, new environments beyond Pandora, massive amount of guns and loot. Did we mention a ludicrous among of guns ?

What we didn’t Even with balance updates some characters weak after the endgame, doesn’t wander far from shoot and loot mechanics

We say A lovingly crafted, highly entertaining 30-hour romp that will endear casual and hardcore players alike in both single and in up to four-player coop mode. If you loved any of the prior Borderlands games or just want an entertaining diversion, Borderlands 3 is the de facto king of the shoot-and-loot hill.