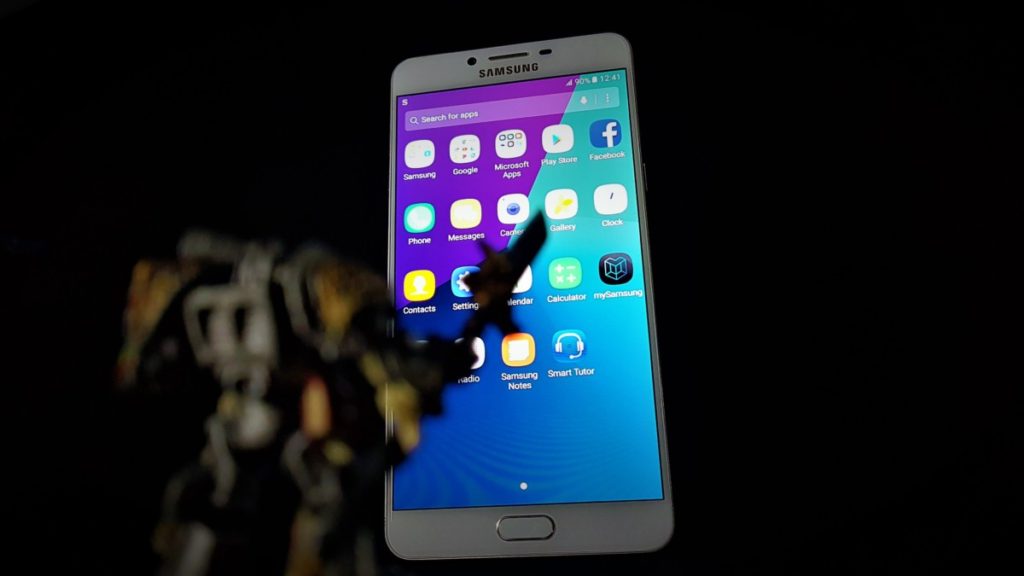 Bordering the edge into tablet territory, the Samsung Galaxy C9 Pro straddles an interesting demarcation of form and function as it logically extends the size and potential of a phablet form factor to its logical conclusion beyond that of their Galaxy Note series but paring down some features to keep it within the more affordable circa-RM2K price range.

Originally, the Galaxy C9 Pro was destined only for the China and India markets but Malaysia has just been added to the list with a recent pre order announcement with the first units shipping by the time you read this. 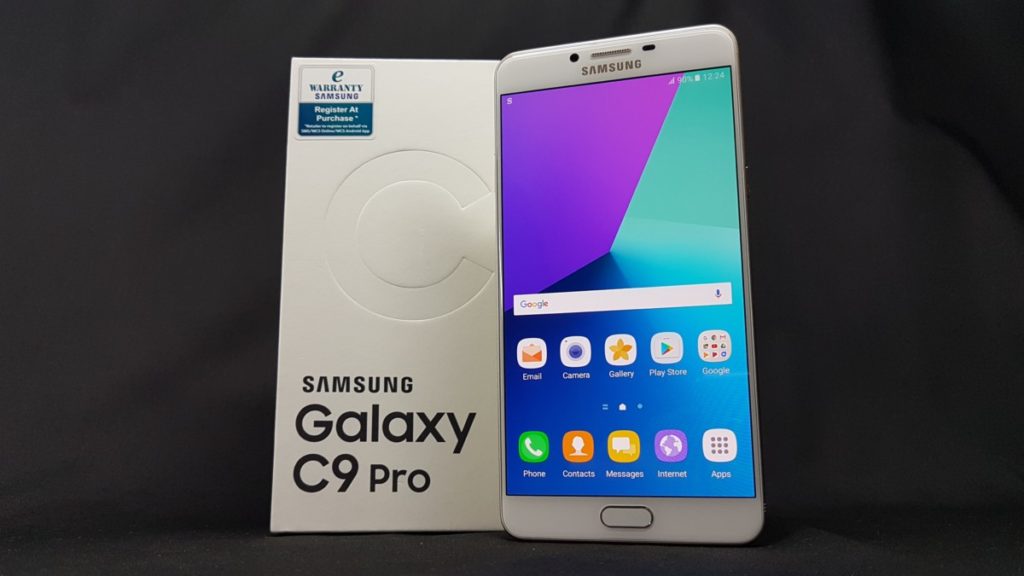 What’s In the Box?
Out of the box, the Galaxy C9 Pro bears the standard seals and markings that indicate the unit is for sale in Asia. Cracking open the seal revealed the phone itself in a nested tray along with a modest array of accessories that include a fast charger, a micro USB to USB Type C adaptor, a USB Type C charging cable and a pair of soft silicone earphones. The microUSB to USB Type C adaptor is a nice touch, allowing existing users to continue using their legacy chargers when they swap over to the phone. 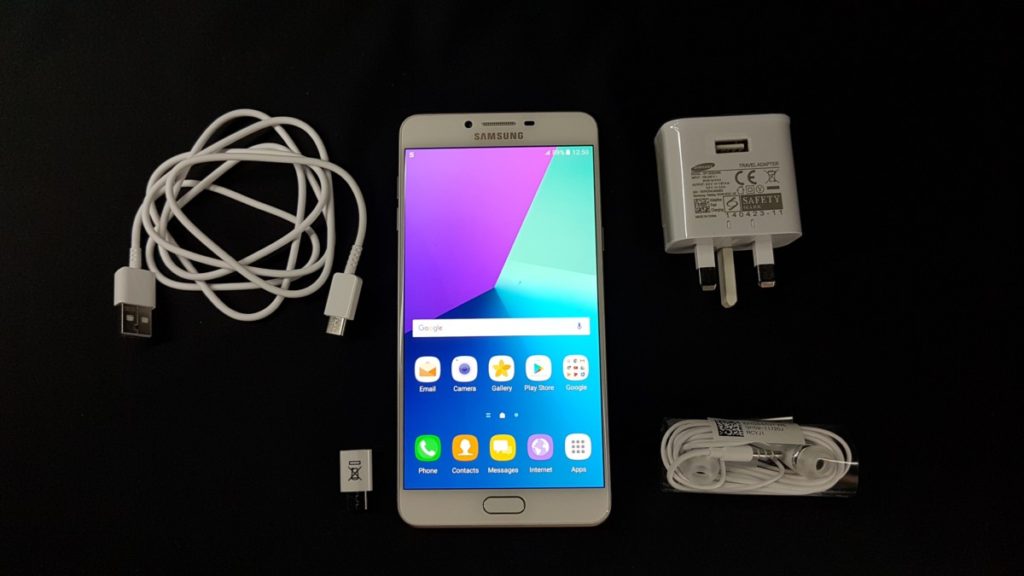 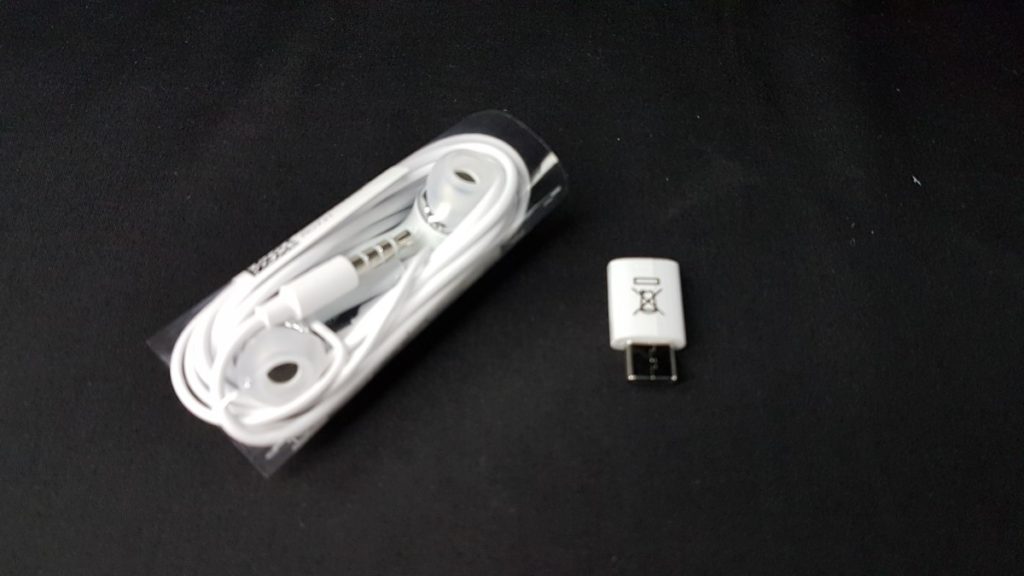 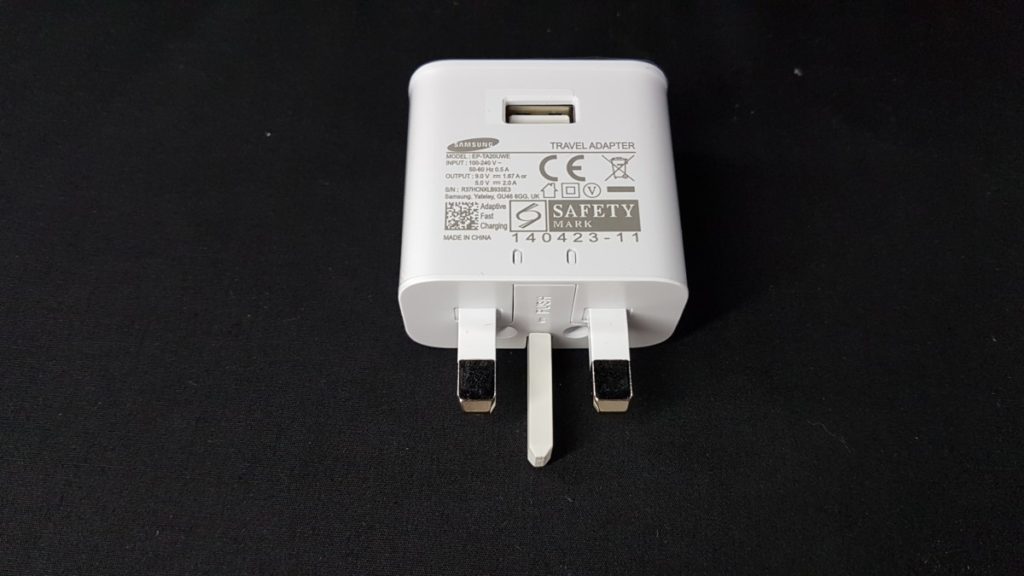 Hands-on with the Galaxy C9 Pro
The Galaxy C9 Pro is, for lack of a better word, titanic in size. The Galaxy S7 edge was considered a pretty large phone with its 5.5-inch display but even that is dwarfed by the sheer size of the C9 Pro and its 6-inch 1080P Super AMOLED panel. 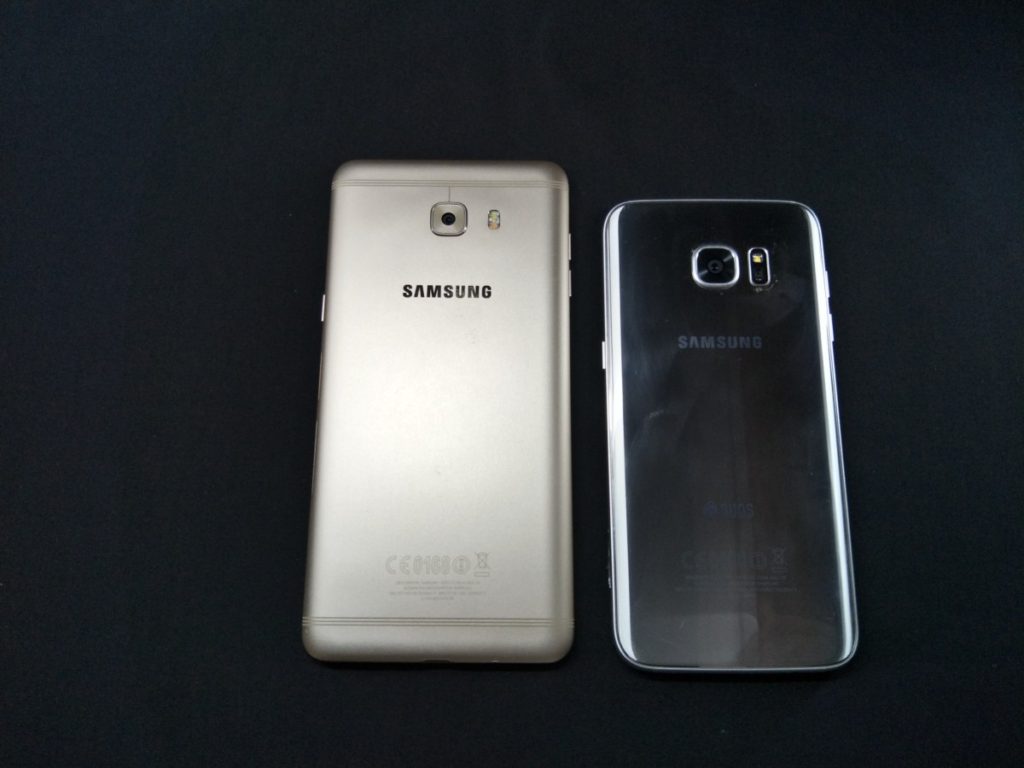 This is on account of the slim bezels on the side which allows them to cram in the huge screen and while it is on the absolute borderline between phablet and tablet, it’s still surprisingly grippable as it is 6.9mm thin though those with smaller hands may find it a bit of a challenge to grasp one handed. 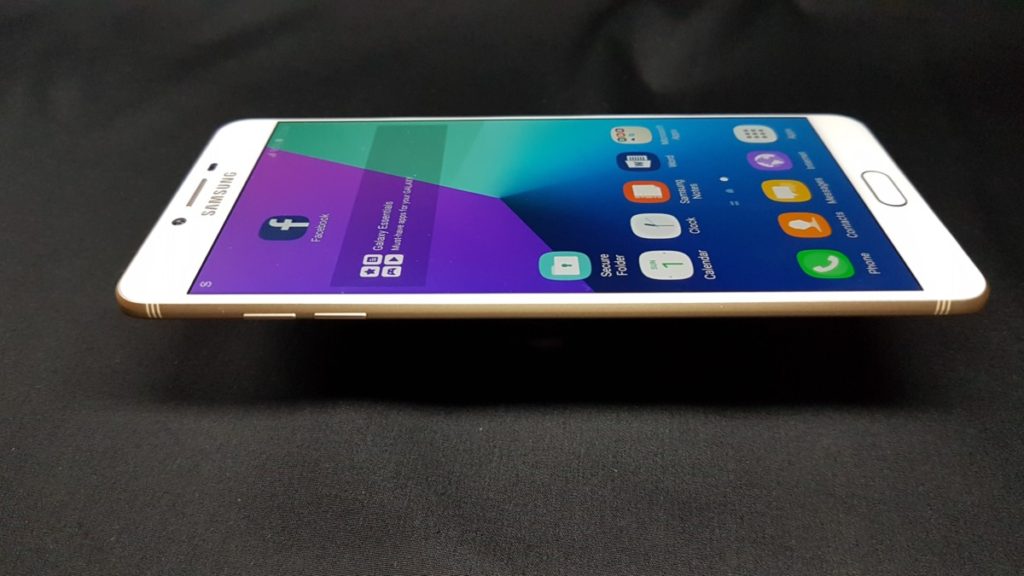 The phone itself has a pretty heavy heft as it tips the scales at 188g; rather heavy as phones go. It is, however solidly built with a unibody aluminium casing that sports rounded corners and, interestingly enough, eschews unsightly antenna bands for a series of guitar-string-style machined grooves into the top and bottom of the casing to ensure the internal radios aren’t blocked. Unfortunately, the Galaxy C9 Pro isn’t water resistant like some of its more recently manufactured siblings so users will have to refrain from taking it anywhere for a dip near a body of water. 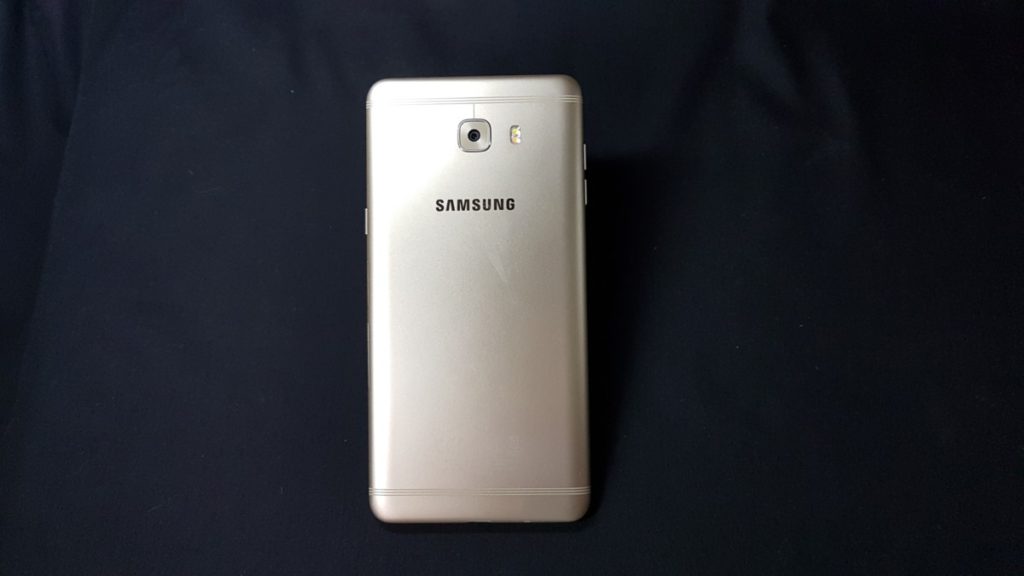 Our test unit’s burnished gold finish was surprisingly fingerprint resistant though it felt somewhat slippery to the touch. On the upper rear quadrant of the backplate, the phone bears a rear-facing 16-MP camera with a dual LED flash and an F/1.9 aperture with the ability to capture 1080P video. 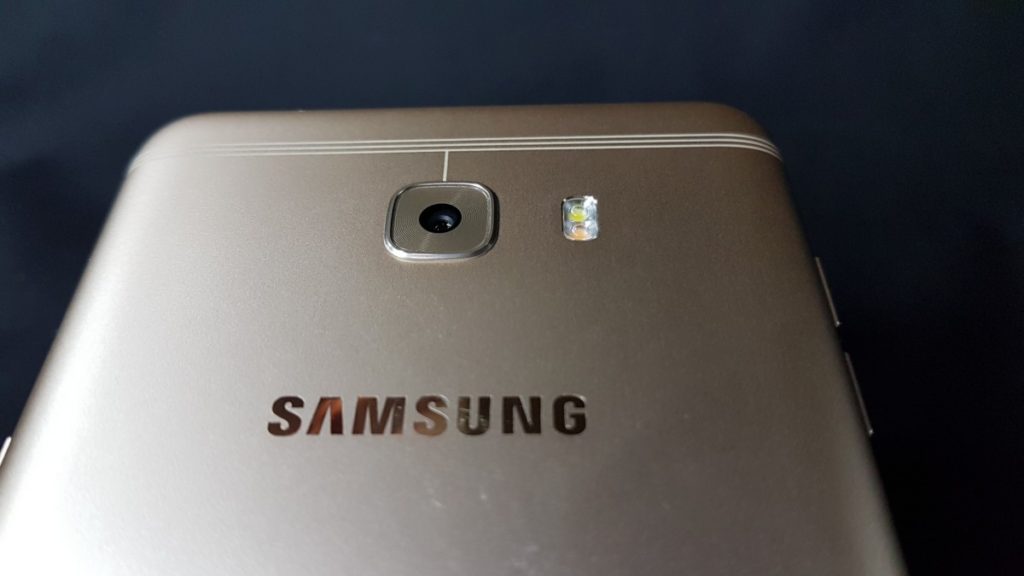 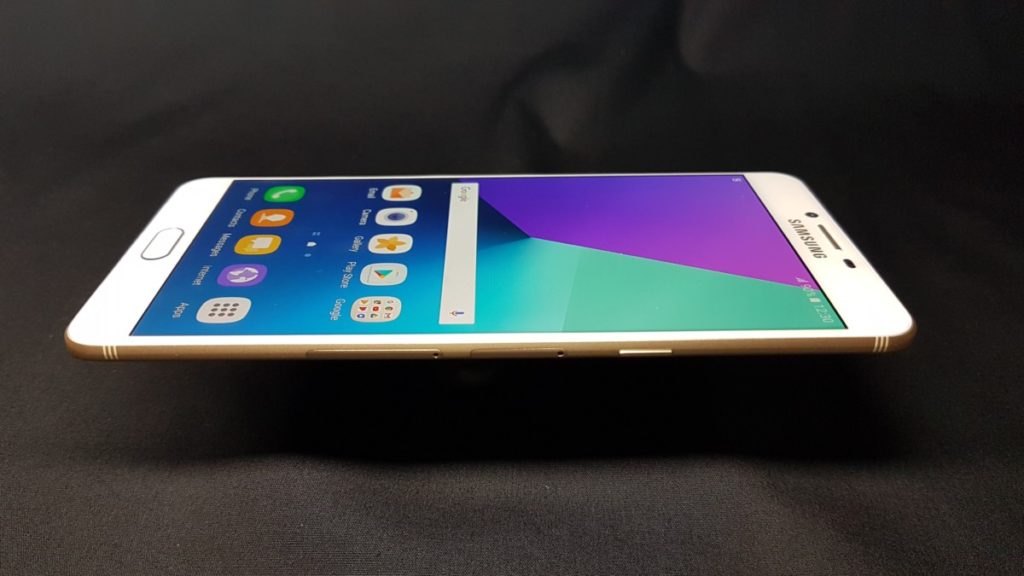 Also present are two card bays, one dedicated for two SIM cards and another solely for microSD cards. 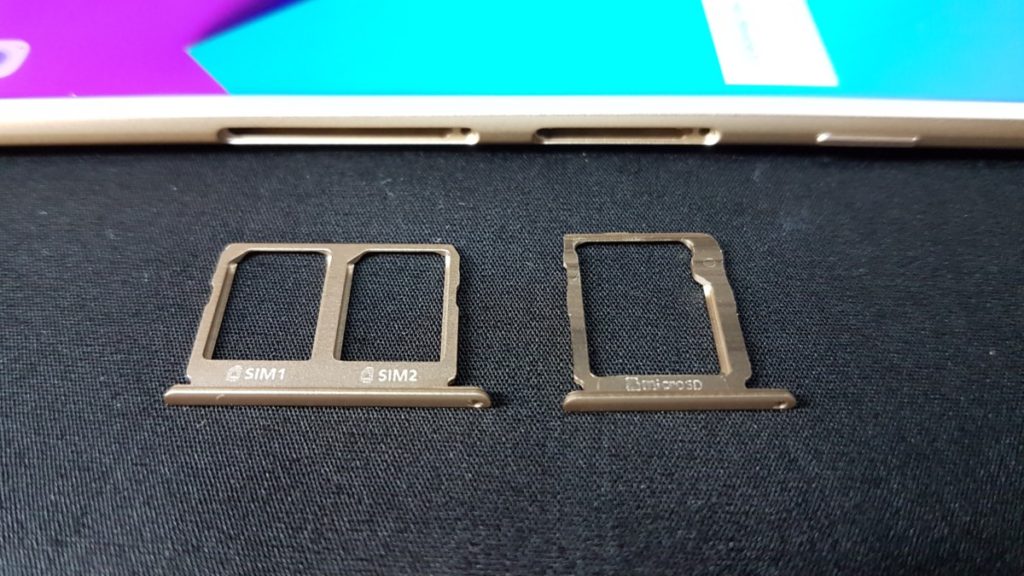 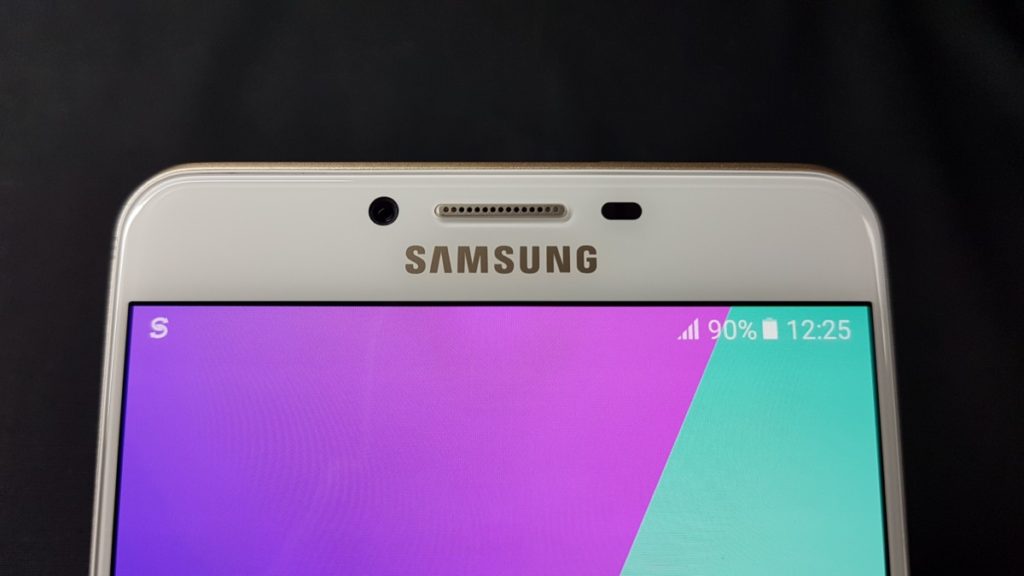 Like many Samsung phones released in the past few months, the C9 Pro comes with their Grace UX user interface so you’re able to enjoy a modicum of features seen on higher end phones such as an ‘Always On’ mode, a blue light filter to make it easier on the eyes when reading at night and the most important feature of all to take advantage of the huge screen – a dual window mode so you can potentially have two apps open at once. Not all apps work in this fashion but most of the important ones do so you can have a Chrome window open and another to watch Youtube and yes, natter away on Facebook too. Unlike the Galaxy A5 and A7 and higher end S7 series phones though, the C9 Pro currently lacks Samsung Pay support so the C9 Pro’s fingerprint reader primarily acts as a security measure. 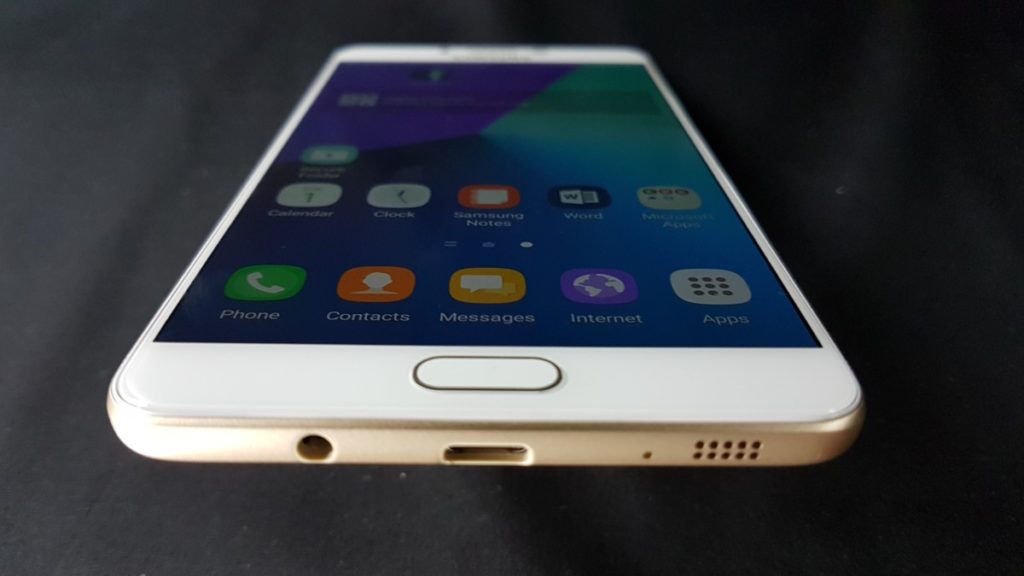 In terms of hardware, the C9 Pro is armed for bear with a whopping 6GB RAM and 64GB of expandable storage. Powering all this is a Snapdragon 652 processor with a big.LITTLE architecture that combines four 1.9GHz cores and four 1.4GHz cores with the former to handle the heavy lifting and the latter for less intensive tasks. Fortunately, the size and weight of the phone has gone to good use as it crams  in a large 4,000mAh battery which also supports fast charging. 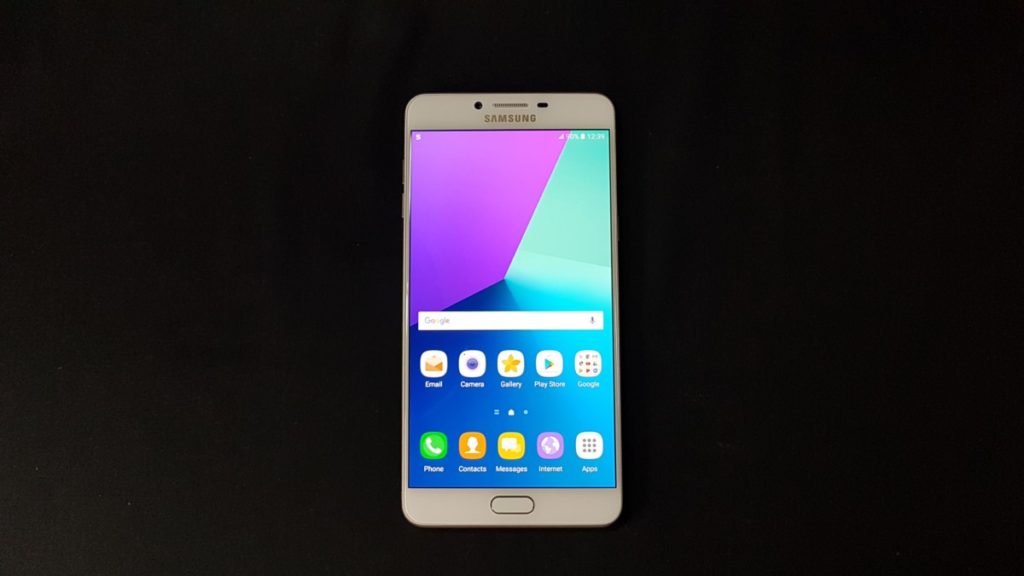 As it stands, the C9 Pro is an unusual proposition, with scads of RAM, a massive Super AMOLED display, a huge battery and a generous amount of storage for about two plus grand or so at RM2,299 though it lacks Samsung Pay, water resistance or an S Pen stylus, which makes it more ideal for users who are looking for a portable media consumption and gaming device and this phablet has enough pixel crunching grunt to manage both in short order. The form factor and the emphasis on placing most of the buttons on the upper quadrant of the phone helps to offer a means to hold it one-handed without having to constantly readjust your grip though a firm two handed grip may be needed for those with smaller hands. More details when we put it to the test in a detailed review. For more details on the Galaxy C9 Pro swing by their official site here. 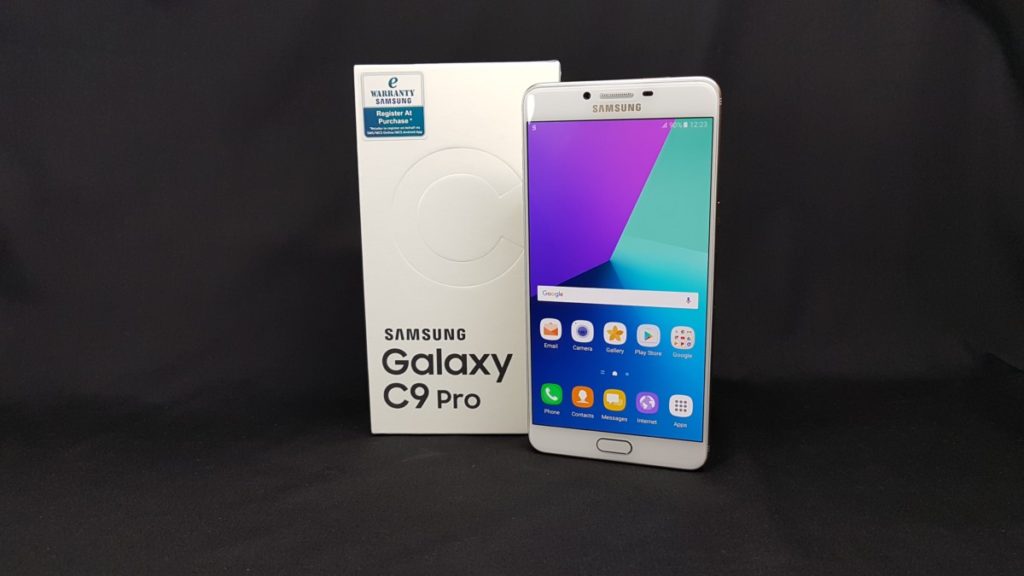