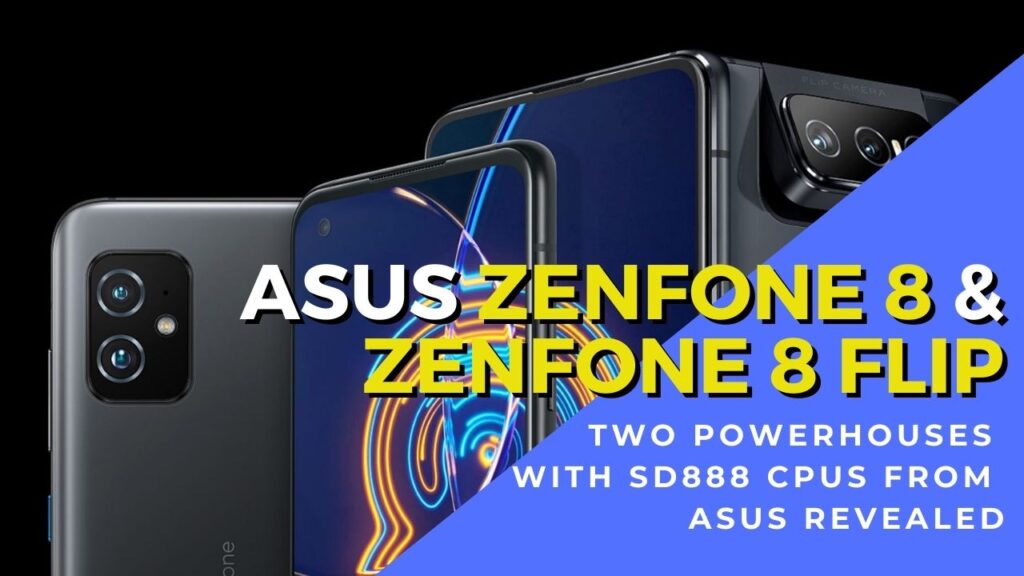 ASUS is best known for their array of laptops across the range for every budget and they even make phones too though last year’s Zenfone 7 did not enter Malaysia. Fortunately, they’re correcting that oversight this year as they are launching their ZenFone 8 and their unique Zenfone 8 Flip globally and in Malaysia too. 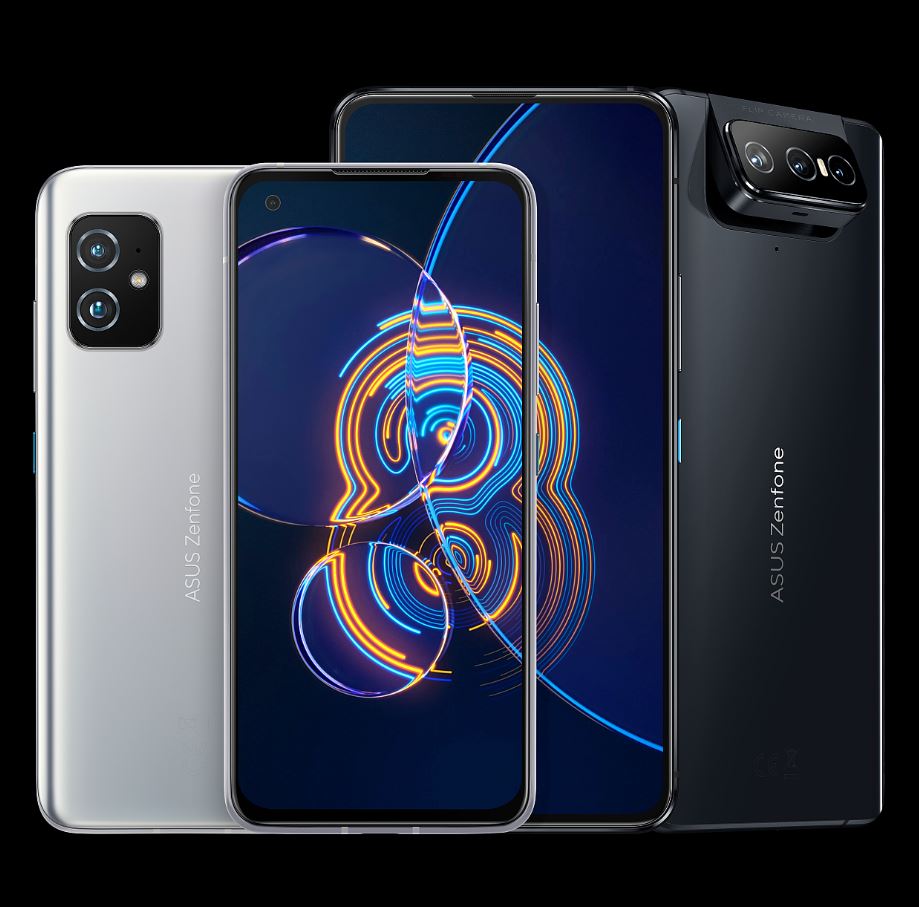 Rather than going for a ‘big is best’ approach, the ASUS engineering team behind the design of the Zenfone 8 decided that less is more, aiming for maximum performance while ensuring it remained ergonomically viable to hold one-handed. 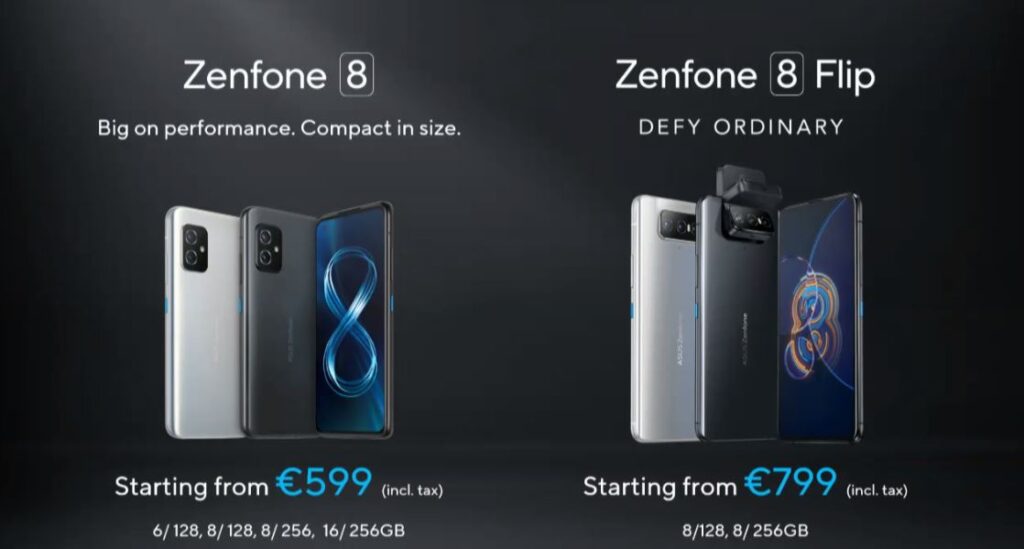 To that end, they’ve kitted it out with a well considered blend of specifications that include the Qualcomm Snapdragon 888 processor and a high grade Samsung-manufactured display too.

The larger Zenfone 8 Flip features much of the same hardware with a larger display and the notable addition of its motorised flip-up camera that lets you use the rear camera as a selfie shooter. Here’s a closer look at how both phones stack up and how much they will retail for. 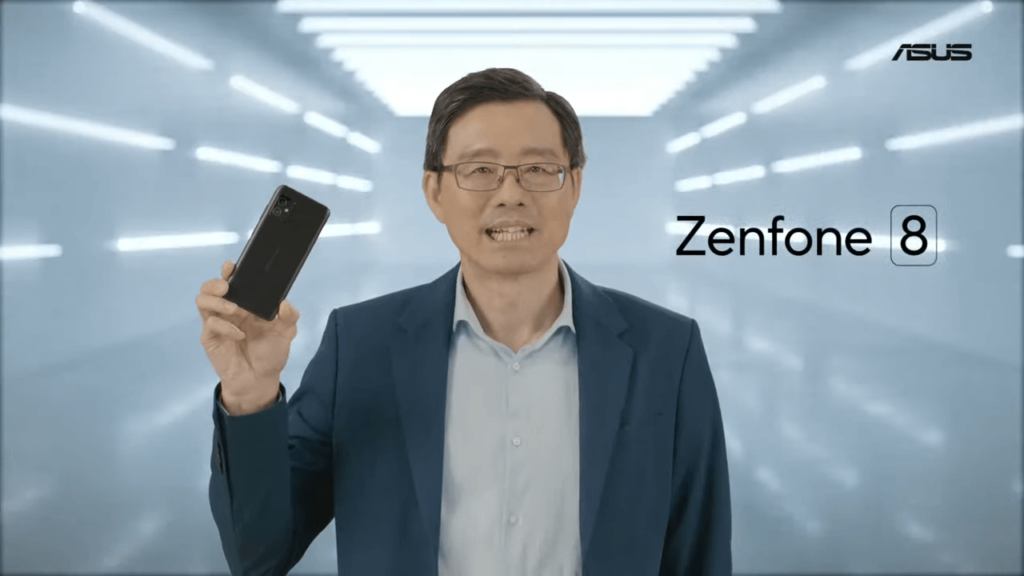 Intended as the flagship phone of the Zenfone 8 series, the titular Zenfone 8 comes with a 5.9-inch FHD+ Samsung AMOLED display with a very respectable 120Hz refresh rate and 1ms response time for its display. It’s also one of the first in the Zenfone series to have IP68 water resistance. 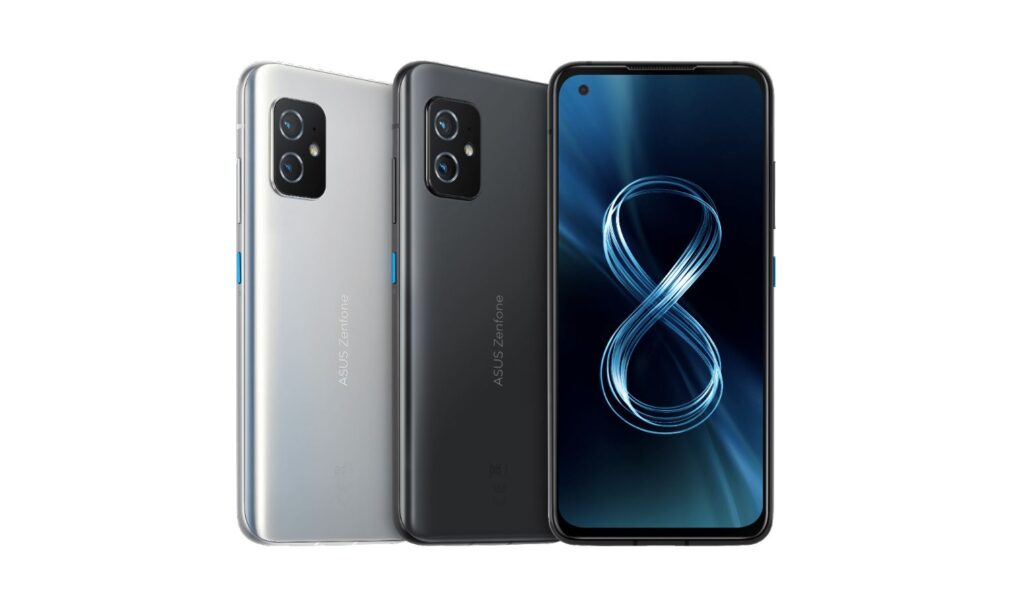 Running under the hood is a Snapdragon 888 processor with 5G connectivity and up to WiFi 6E depending on region. Storage and RAM also differ based on region but you can get it with up to 16GB LPDDR5 RAM and 256GB of non-expandable UFS 3.1 storage.

The rear is taken up by a dual camera array with a primary 64MP F/1.8 camera featuring optical image stabilisation, PDAF and a Sony IMX686 sensor to kick out pixel binned 16MP shots.

This is paired up with a 12MPF/2/2  ultra wide angle camera using a Sony IMX363 sensor riding shotgun with dual PDAF. This dual camera setup allows it to shoot up to 8K video off the rear camera which is something only a select few phones to date can achieve including the ROG Phone 5, Galaxy S21 Ultra and Mi 11 Ultra. The front features a 12MP selfie camera with dual PDAF using an IMX663 processor.

Where it differs from the norm is that ASUS has kitted it out with a larger than usual pair of cylinder speakers akin to the ROG Phone 5 with Cirrus Logic CS35L45 amplifiers and unlike other flagship phones, it still has a 3.5mm audio jack that has an Aqstic WCD9385 DAC for excellent audio reproduction. 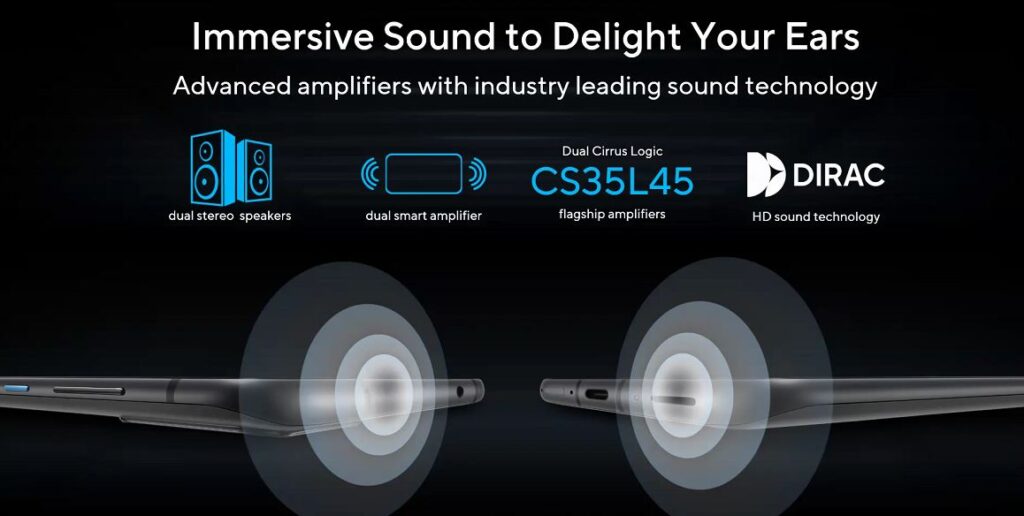 Powering it is a 4,000mAh battery with 30W HypeCharge and Quick Charge 4.0 support that enables it go charge up to 60% in 25 minutes though oddly enough, it doesn’t have wireless charging. 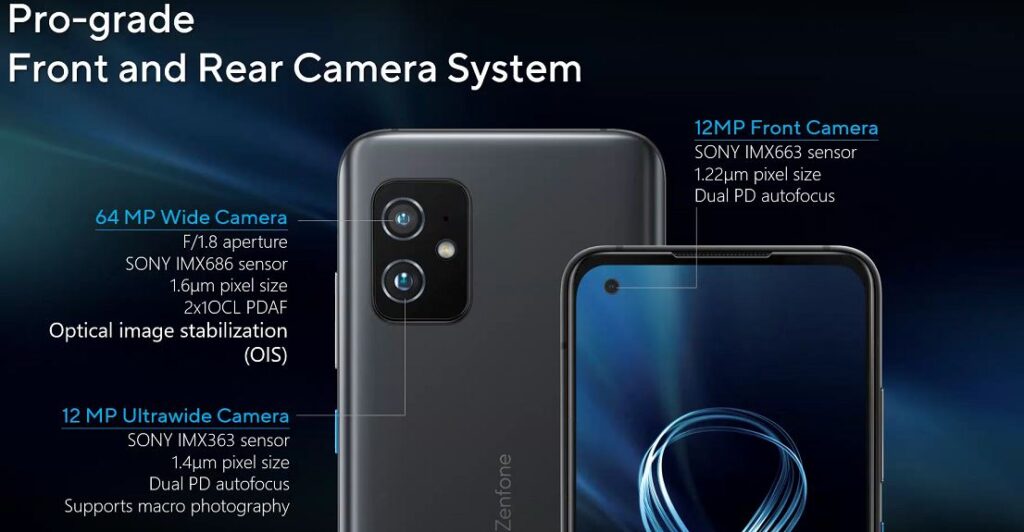 Prices vary based on region but at the global launch, ASUS has stated that it will cost from €599 (about RM2,974) for the base 6GB RAM/128GB variant and up. You also get a choice of two colour schemes which are Obsidian Black and Horizon Silver. 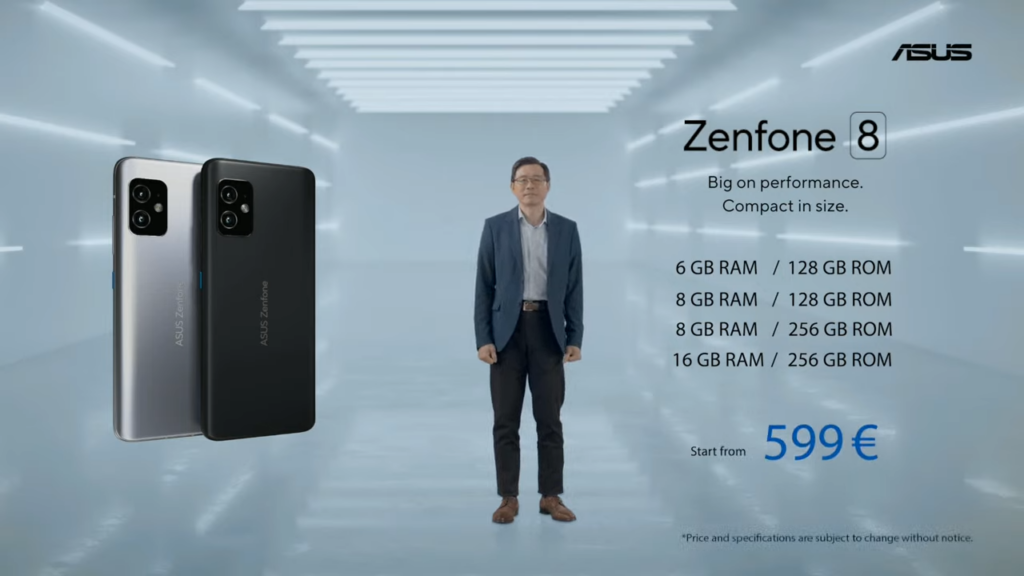 The Zenfone 8 Flip has the unique distinction of a motorised mechanism that allows it to flip the rear triple camera array straight up to enable it to function as a selfie camera. This mechanism itself features quite a few interesting features that ensure its durability over its service life.

ASUS took pains to elaborate on its usage of ‘Liquid Metal’ that can apparently survive minor dings and dents to some degree as part of the camera housing while the built in motor is rated to survive five years of continuous use with at least 150 flip-ups a day. 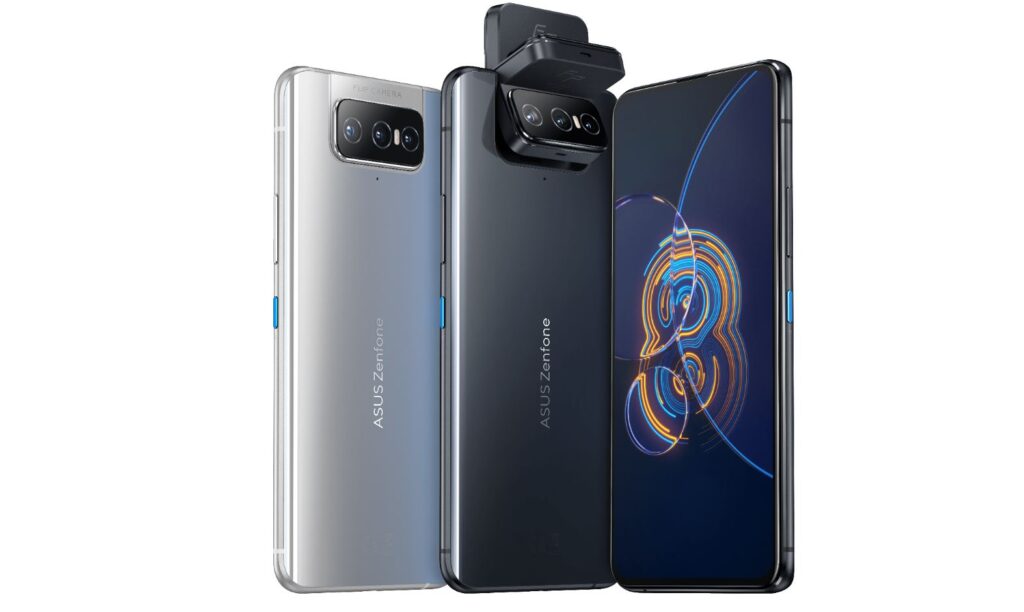 For added peace of mind, they’ve also integrated a sensor that retracts the camera in case it detects a fall. This mechanism also allows for quite a few creative tricks and ASUS says that the mechanism allows it to take epic panoramic shots without the user having to actually move the phone; the mechanism moves the camera for you.

Mechanism aside, the Zenfone 8 Flip features the same Snapdragon 888 processor with 5G connectivity and features up to 8GB RAM and up to 256GB of expandable storage.

Unlike the Zenfone 8, the Zenfone 8 Flip features a triple card slot with  microSD card tray on top of the dual nano SIM card tray. It also features up to WiFi 6E support depending on region along with Bluetooth 5.2. 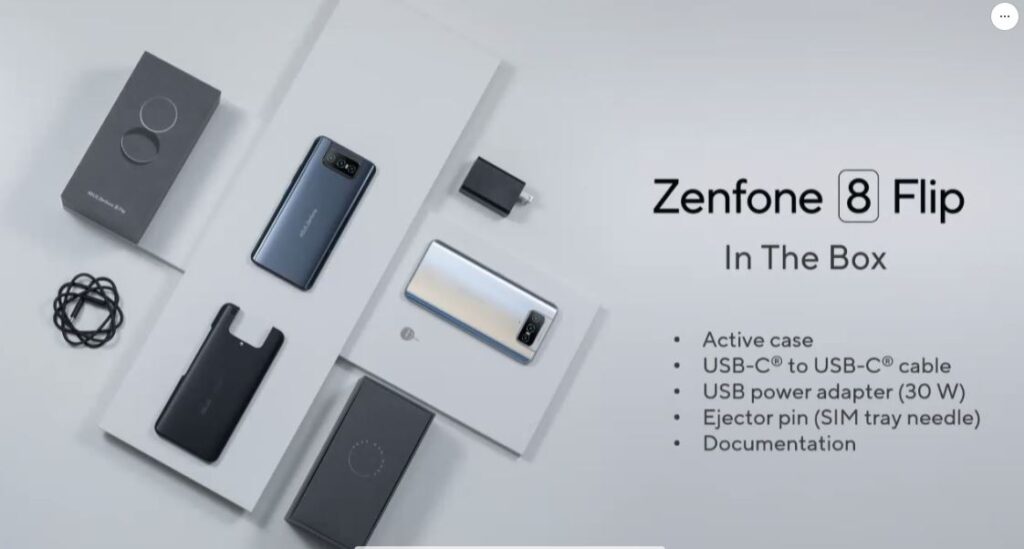 Where it differs is that it features a larger 6.67-inch FHD+ Samsung AMOLED display with a 90Hz refresh and 1ms response time. This makes it a larger display than the Zenfone 8 though it has a slightly slower refresh rate. The camera setup is similar to the Zenfone 8 though it adds in an 8MP telephoto camera with 3x optical zoom and up to 12x hybrid zoom.

The ASUS Zenfone 8 Flip has prices starting from €799 (about RM3,966) for the 8GB RAM/ 128 storage variant and up in your choice of either silver or black. 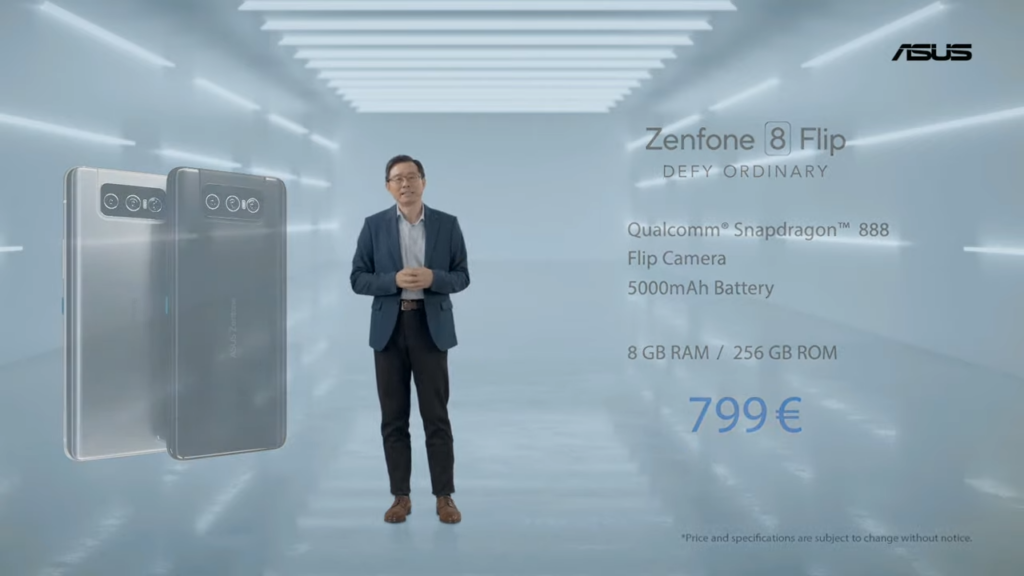 Here’s a summary of the specifications of the ASUS Zenfone 8 and Zenfone 8 Flip.