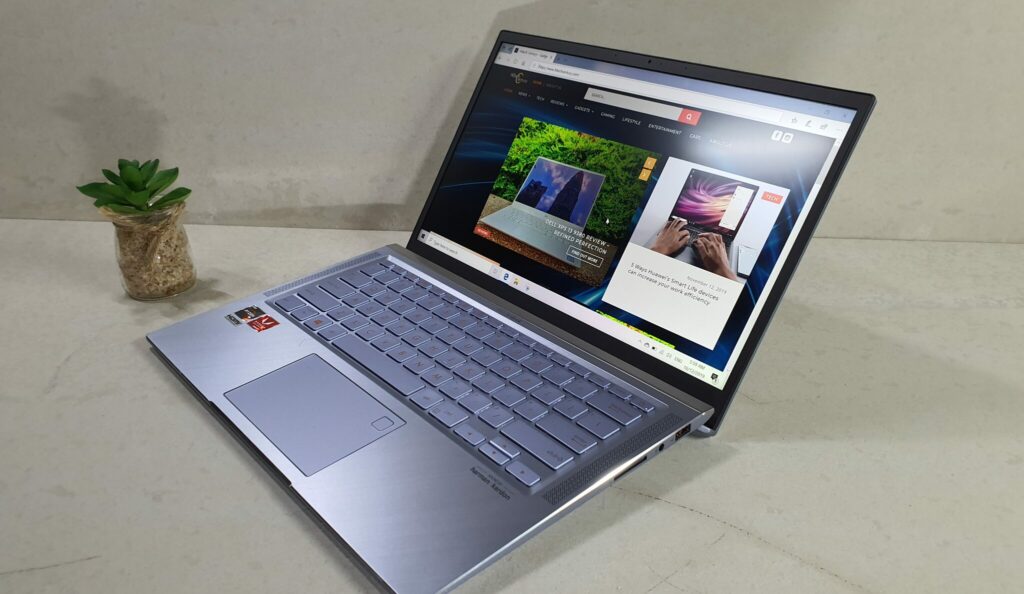 Previously, we took a closer look at the build and general design of the Asus ZenBook 14 UM431 that blends the superior build quality of Asus’ ZenBook series along with an AMD issued Ryzen 5 series processor. This time around, we’ll get a closer look at the notebook and see how it fares under actual field conditions. To refresh your memory as to the quality of the ZenBook 14 UM431’s build quality and design, swing by our prior coverage here. 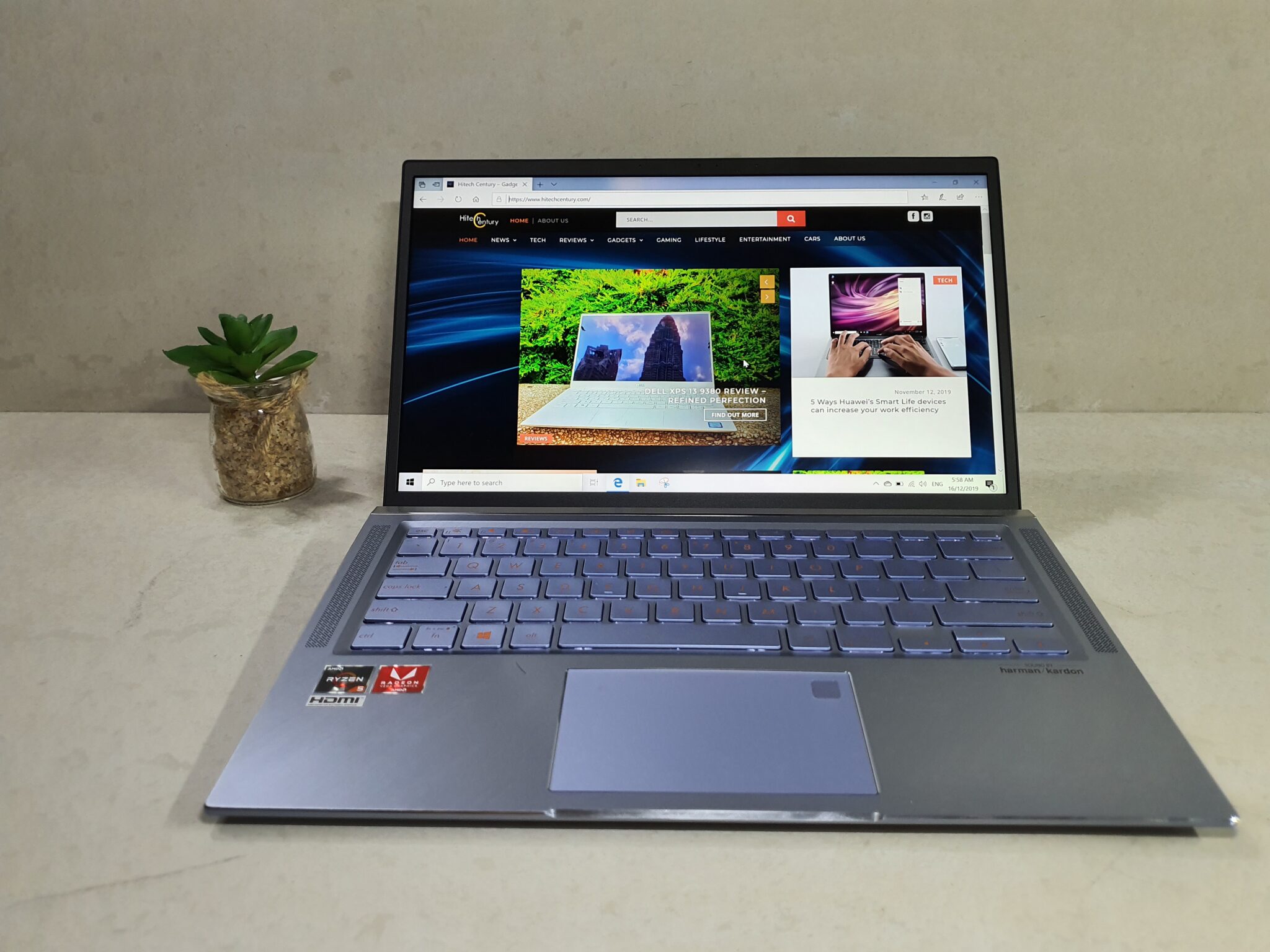 In terms of hardware, the notebook comes with a 14-inch Full HD display with a matte coating that repels fingerprints, an AMD Ryzen 5 3500U processor paired with Radeon Vega 8 integrated graphics, 8GB DDR4 RAM on one SODIMM slot and 512GB PCIe SSD as the configuration available for purchase. A variant exists with 16GB RAM though it’s not stated if this configuration will be available in Malaysia nor is there an option to add additional RAM as it’s all soldered in. 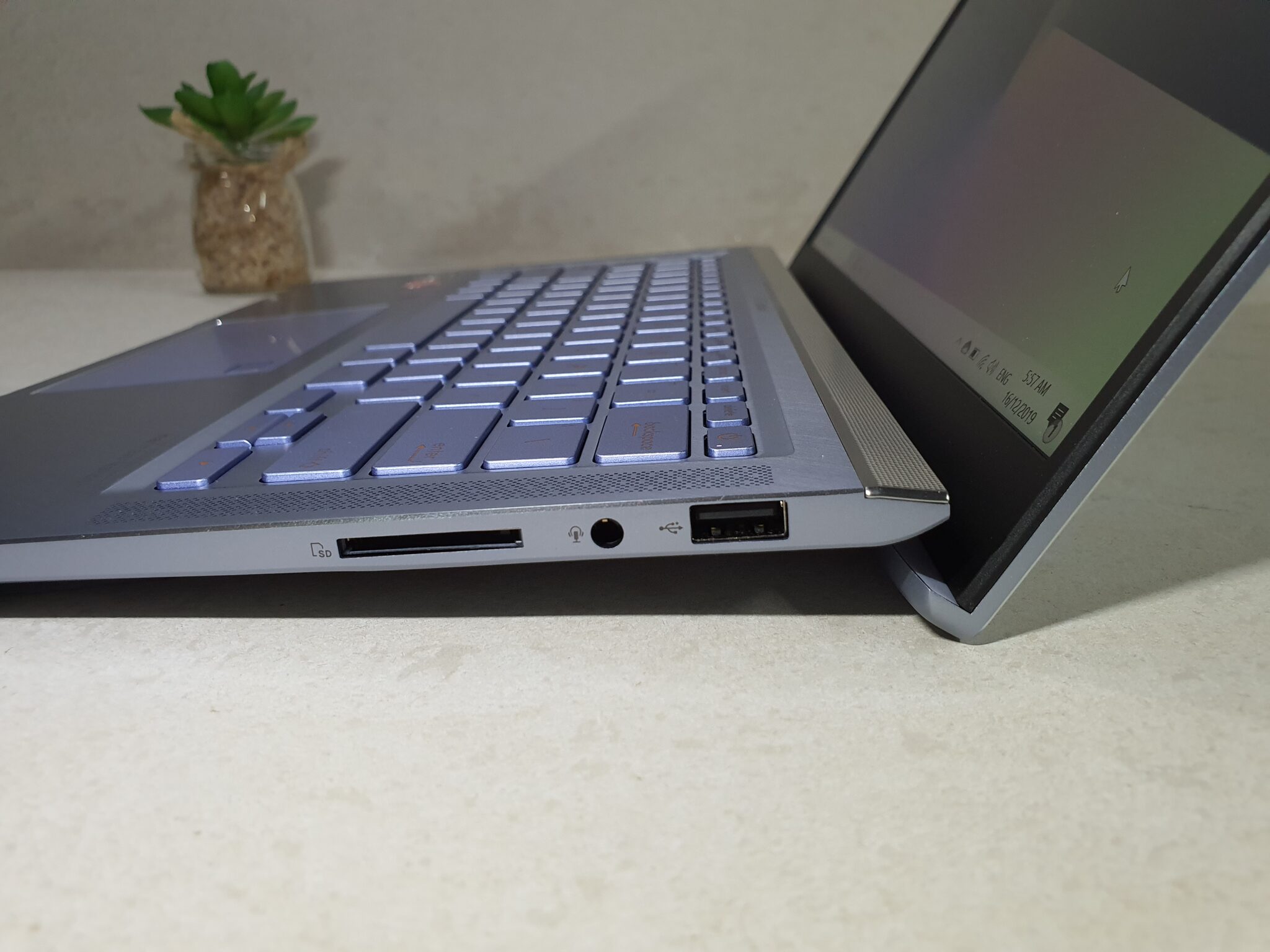 On paper, the AMD Ryzen 5 3500U CPU powering the UM431 is built on a 12nm process and AMD’s Zen+ architecture that was announced earlier in January 2019 that is intended for slim mid-range laptops. 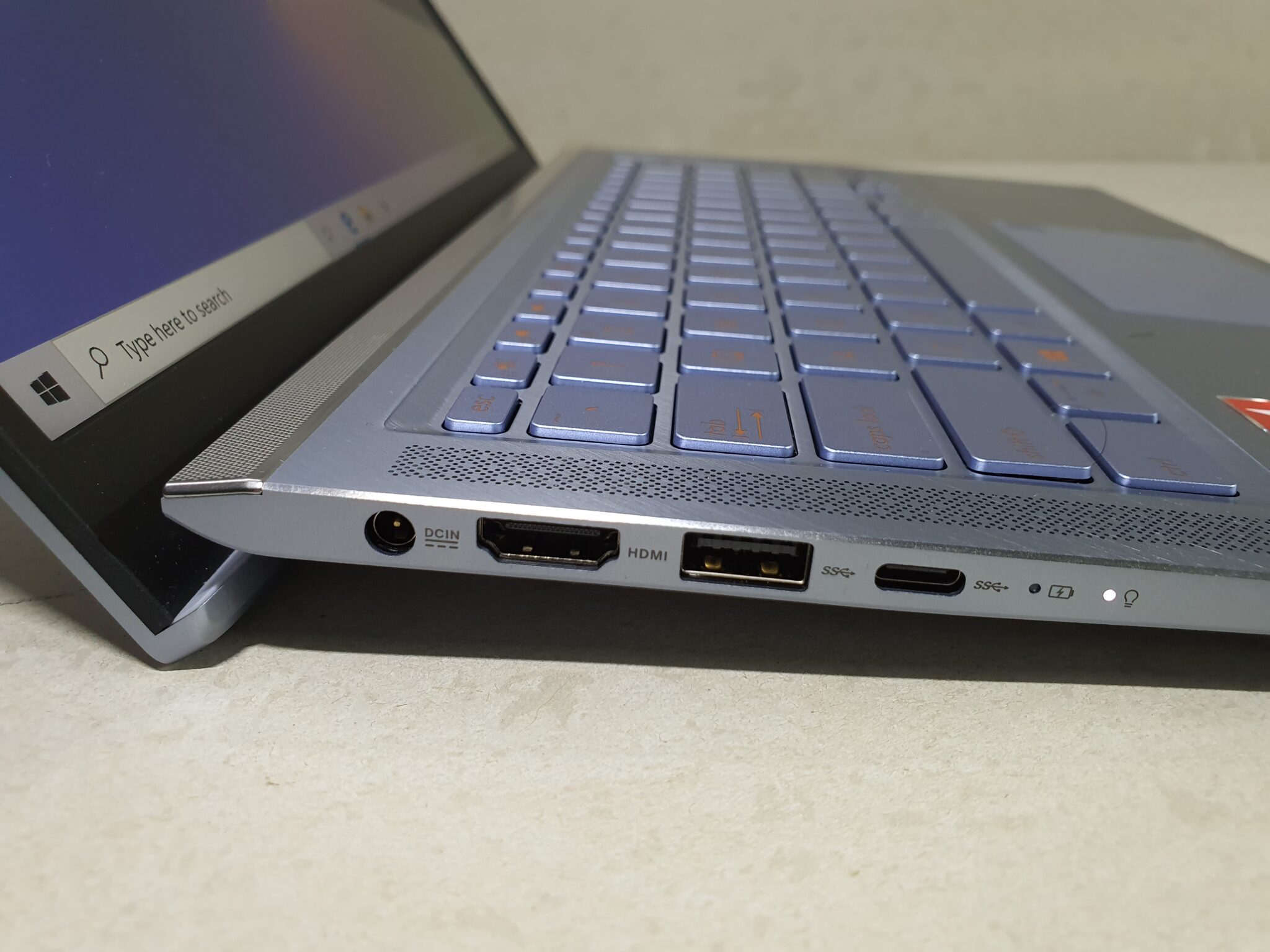 The AMD chip is a 2.1GHz processor with a maximum boost speed of 3.7GHz, packing 4 cores and 8 threads with 8 GPU cores and comes with integrated Radeon Vega 8 graphics which is clocked at 1200Mhz. The successor to their earlier Zen architecture, Zen+ microarchitecture of the Ryzen 5 3500U processor has a slightly improved 3% (IPS) performance per clock and about a 10% increase in performance. 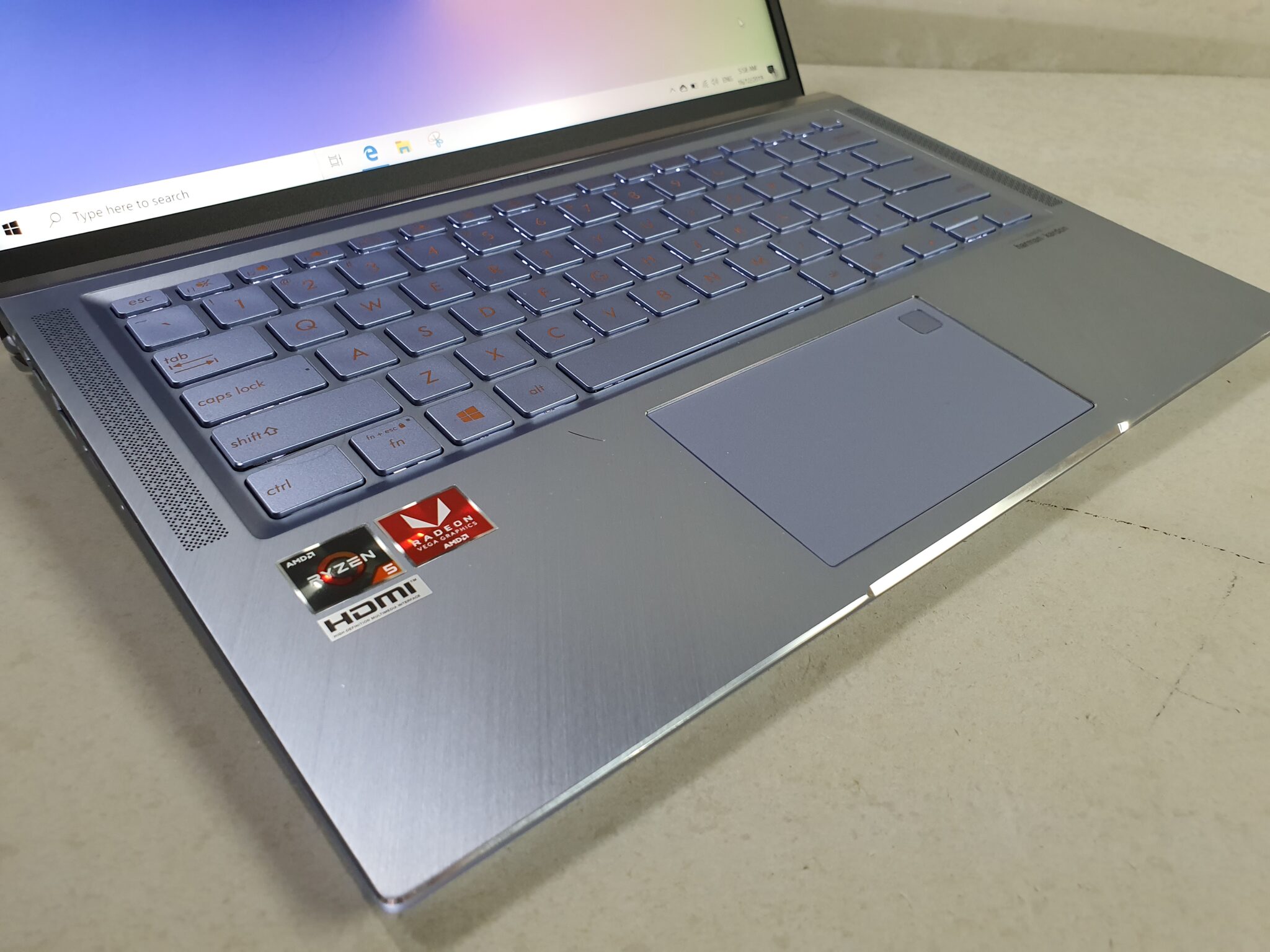 Operationally speaking, the AMD Ryzen 5 3500U processor is intended to take on Intel’s 8th generation Core i5 series processors, aiming to offer almost the same amount of punch at a lower price point. Under synthetic benchmarks, the processor gave a fair accounting of itself. 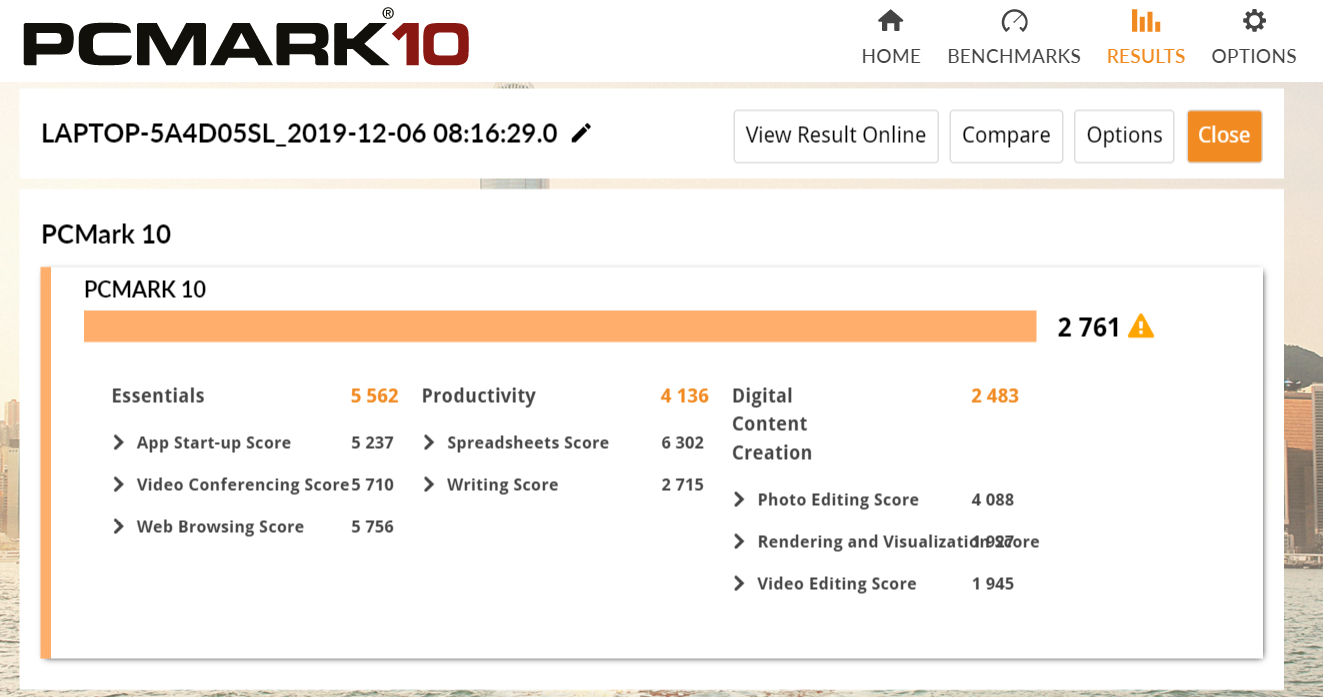 This is somewhat lower across the board compared to the competition and is midway in performance from a stock Intel Core i5 8265U with integrated graphics versus some configurations like the VivoBook S531F that have NVIDIA GeForce MX250 GPUs which isn’t exactly a fair comparison, so to speak. 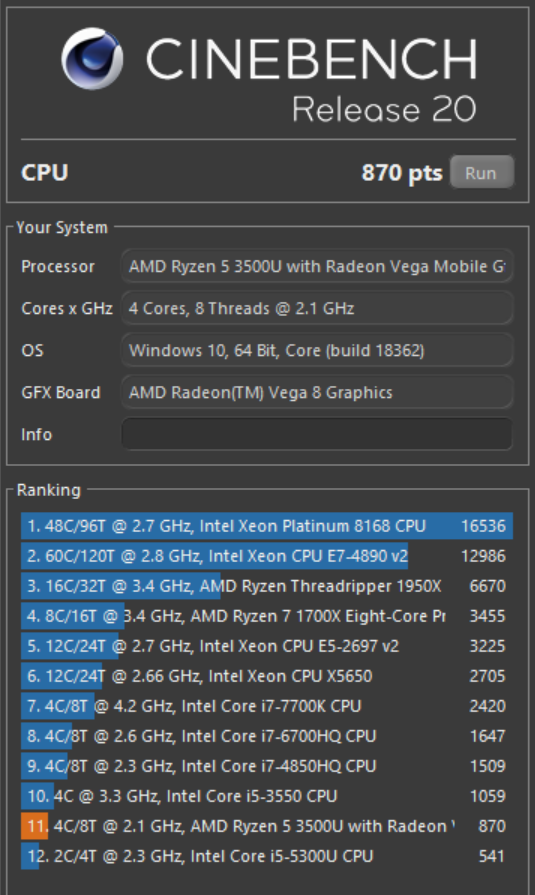 The provided 512GB SSD did not disappoint with 1641MB/s read speeds and 837.65MB/s write speeds which is on par with its other equivalents seen in other Asus notebooks packing similar storage configurations. 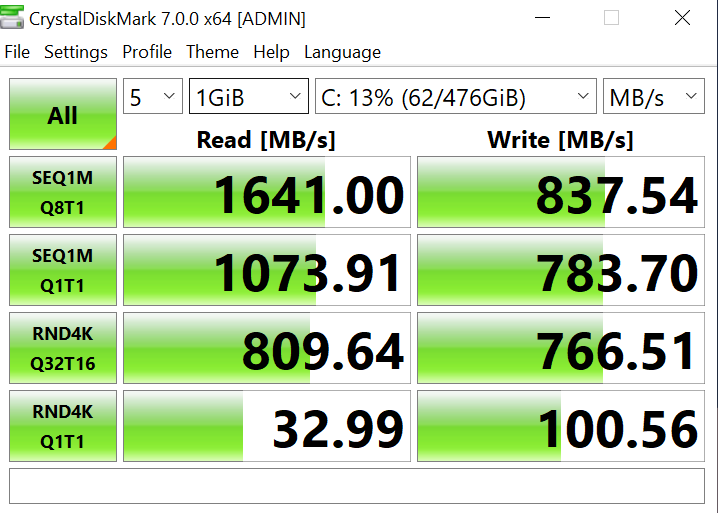 In terms of performance under actual conditions, the Asus ZenBook UM431 proved to be a solid workhorse for most computing tasks. Web browsing and tabbing across a dozen open windows in Chrome wasn’t an issue nor was opening up some budgeting spreadsheets and Google docs. 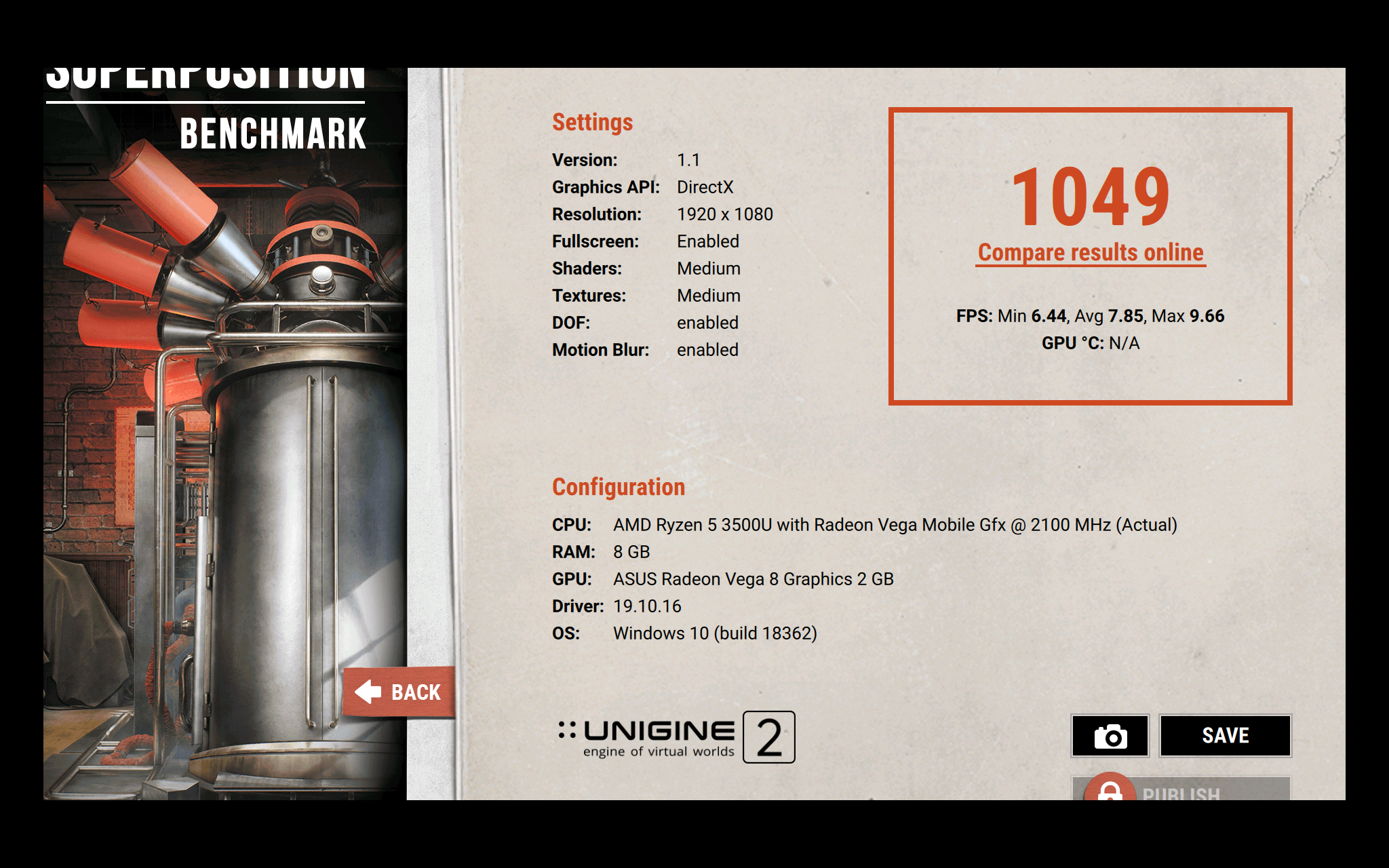 It also managed older games like Deus Ex: Human Revolution at 1080P at a consistent 60Hz without undue trouble though it did take several seconds longer than usual to load up. Even under heavy workloads, the notebook keeps heat well under control and was barely hotter than a warm cup of coffee near the heat vents.

The provided NanoEdge 1080P display proved to be excellent with good clarity and colour rendition though it has poor visibility under direct sunlight which makes it more ideally suited for indoors use. 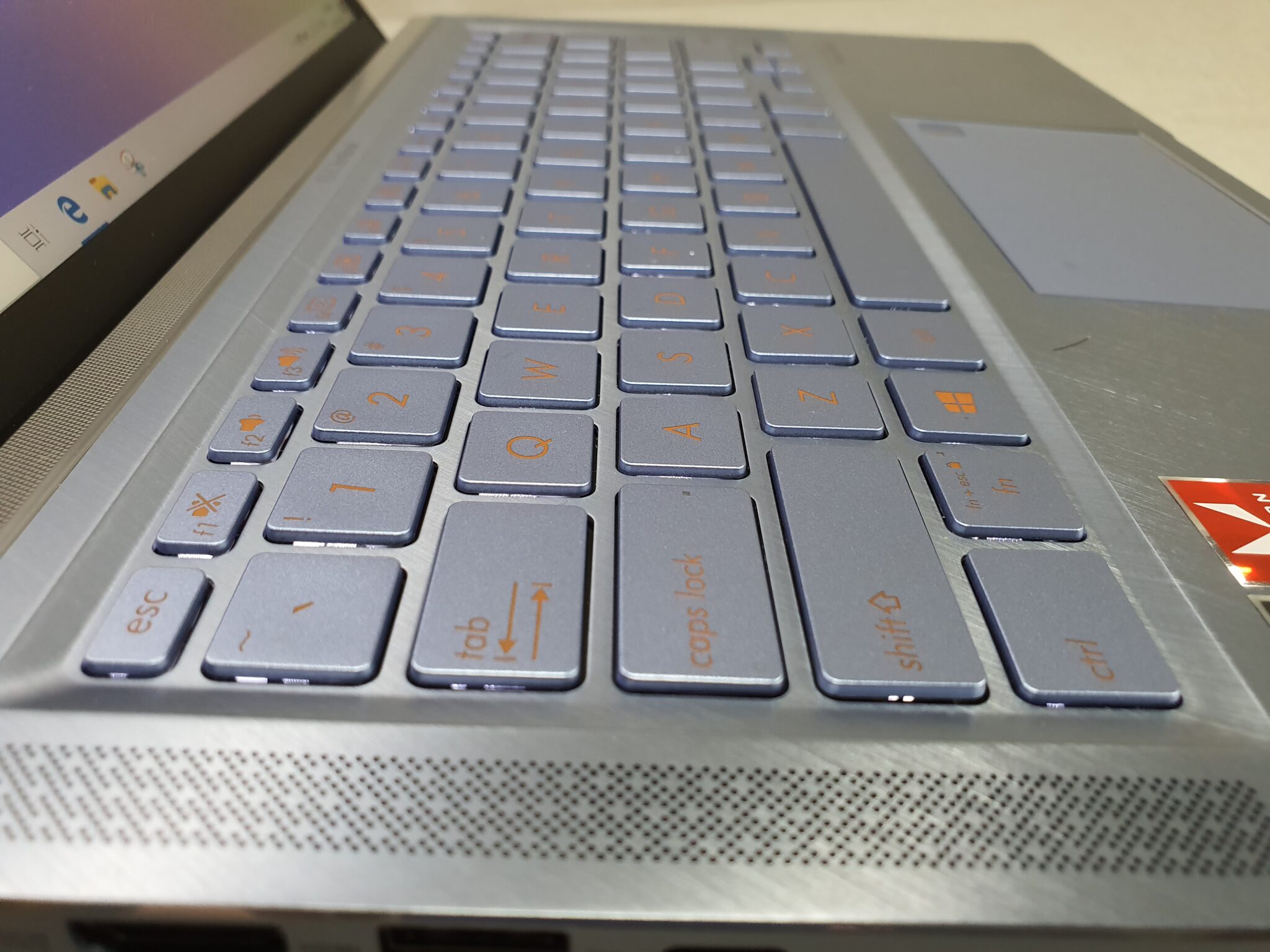 On that note, the speaker setup on the ZenBook 14 UMD431 is one of the best on test with the combination of four speakers, two upwards-firing and two downwards-firing offering a sound stage and volume that few others can beat. It’s excellent for gaming with a solid rendition of bass and has a fair amount of detail to make movies and music listening a viable possibility.

The provided keyboard has decent travel and play and is an otherwise solid proposition with sufficiently spaced keys that you don’t feel cramped when typing on it. We managed a decent 110WPM on this without even breaking a sweat. 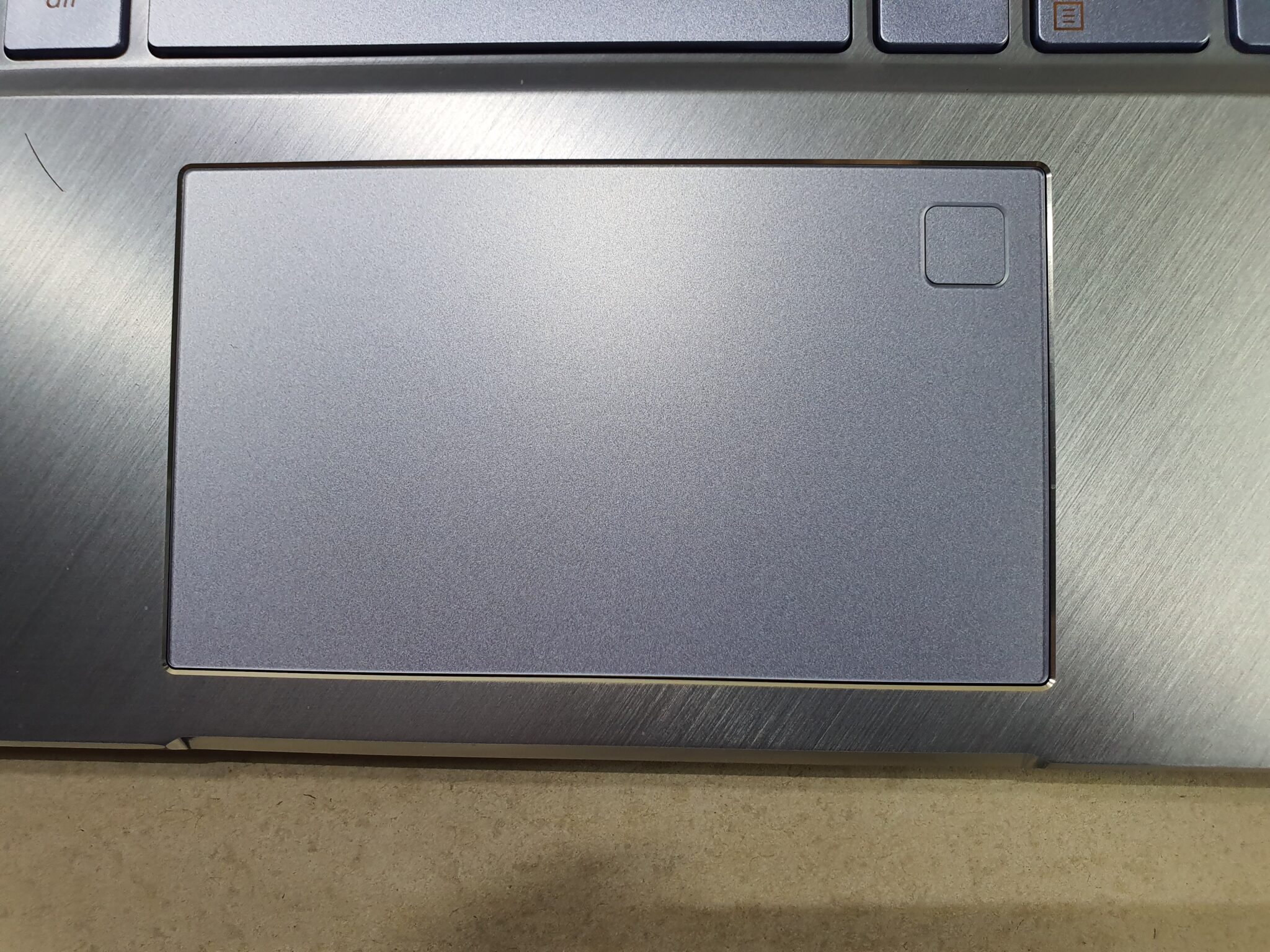 Of note is that the local version of the ZenBook 13 UM431 comes with a conventional touchpad. Overseas versions have a NumberPad for added versatility though this doesn’t impact on its performance and is more of icing on the cake than anything else. It’s a solid general purpose performer though it’s no speed demon by any means of the word.

On paper, the ZenBook 14 UM431 is rated for about 12 hours of usage on its 47-Whr 2-cell lithium-ion battery but in practice, it falls short of the mark. On moderate settings and moderate screen brightness using a standard workload that did not involve gaming but liberal amounts of Google documents, spreadsheets, web browsing and some videos on YouTube, the notebook only eked out an average of about 7 and a half hours of effective usage.

This likely means it’s ideal for a day trip out of the office or a lecture. You’ll otherwise need to tote around the power cable but it’s fortunately a compact and light affair so it’s not that big a problem. 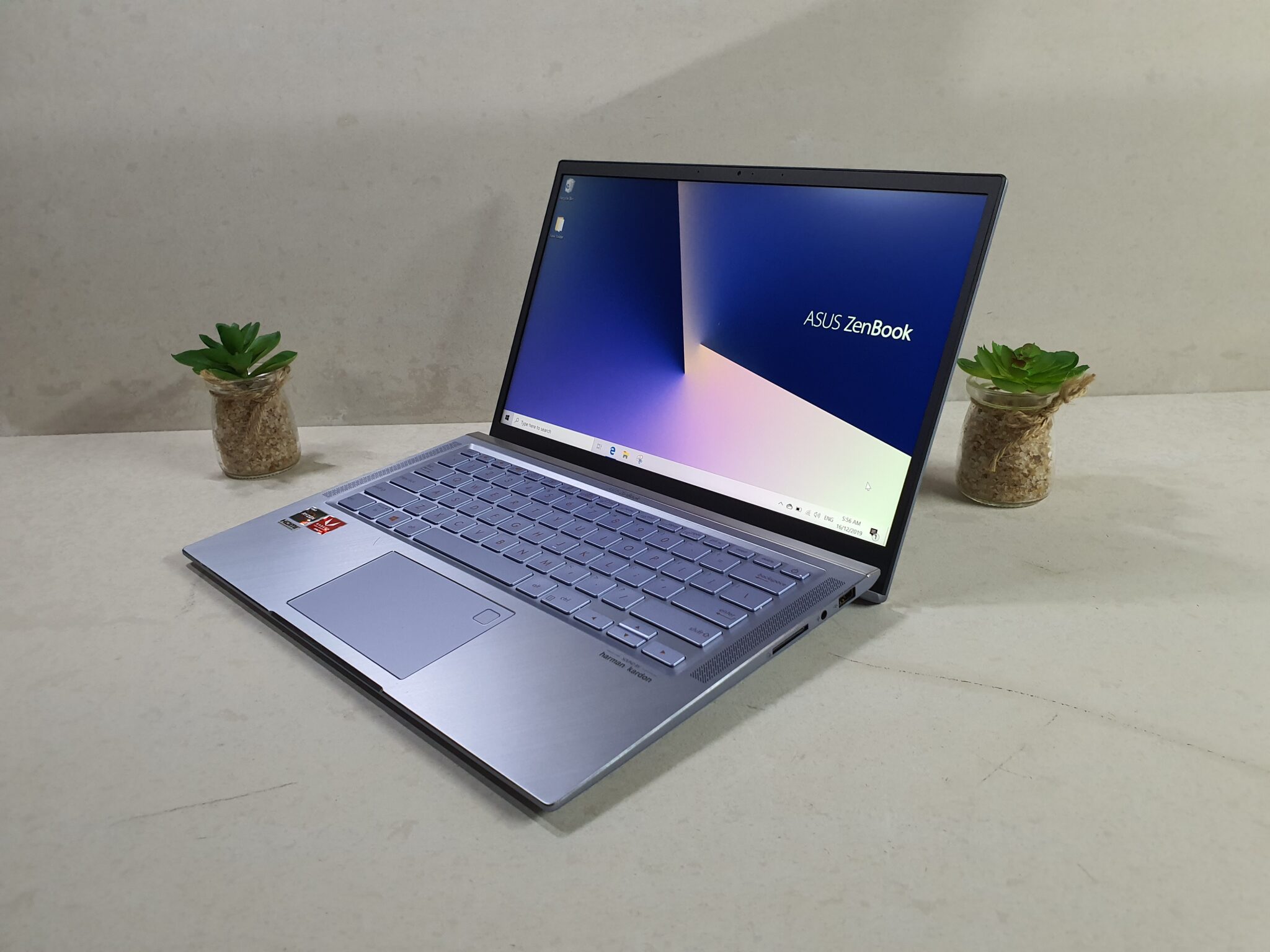 What you have with the ZenBook 14 UM431 is a highly affordable, well constructed ultraportable that has excellent build quality and serviceable performance. Battery life is middling at best but what makes it truly appealing is that it clocks in at just RM2,999. If you’re on a budget and are looking for a good looking workhorse, this is well worth your consideration.

What we liked Excellent build quality, attractive price tag for performance, good display, great speakers
What we didn’t Middling battery life
We say What you have with the ZenBook 14 UM431 is a highly affordable, well constructed ultraportable that has excellent build quality and serviceable performance. Battery life is middling at best but what makes it truly appealing is that it clocks in at just RM2,999. If you’re on a budget and are looking for a good looking workhorse, this is well worth your consideration.