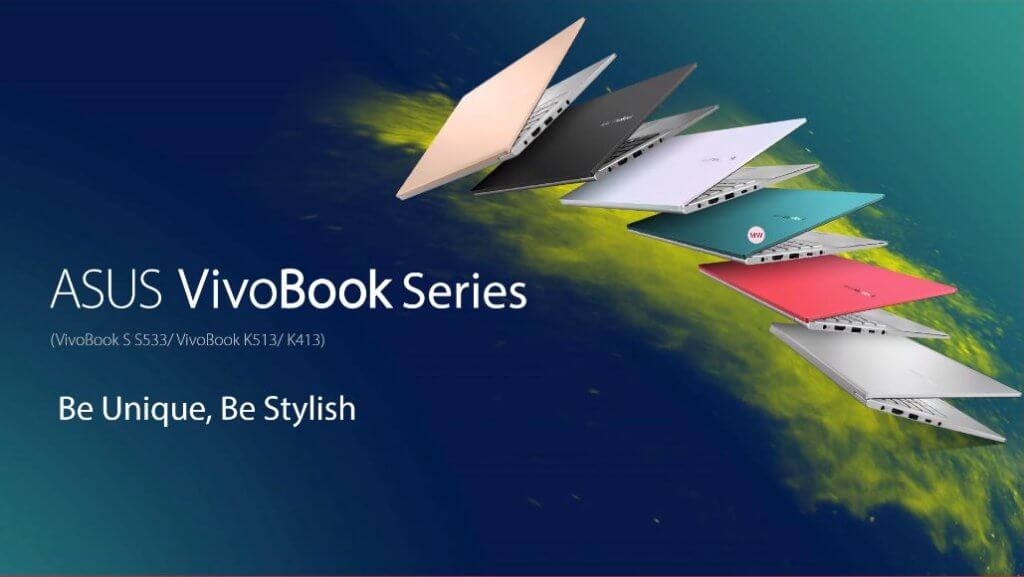 ASUS is released refreshed versions of their highly popular ZenBook 13 UX325 and ZenBook 14 UX425 along with their VivoBook S14 and S15 as well as the VivoBook K513, all with the new 11th Gen Intel Tiger Lake processors to Malaysia. 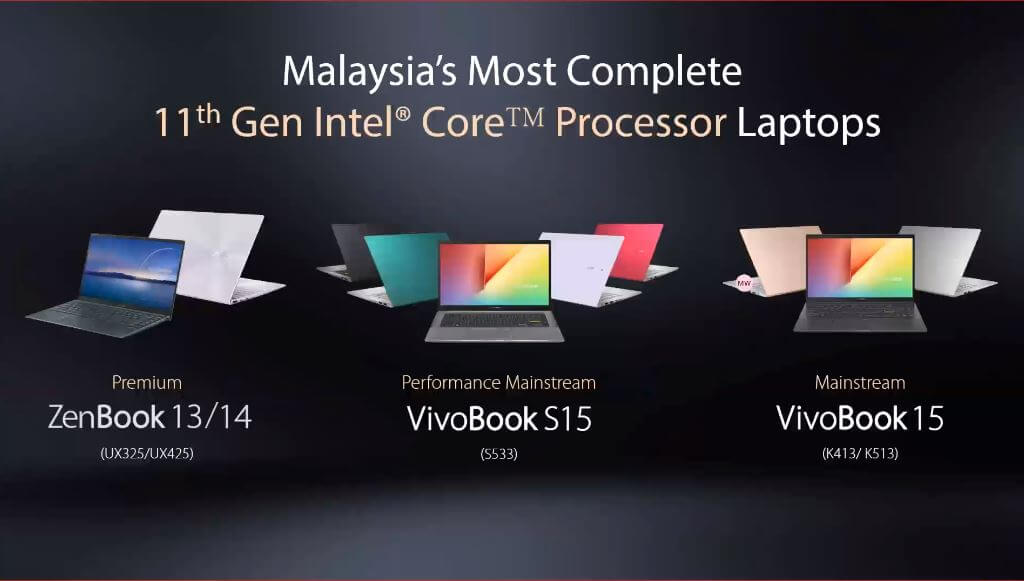 The revamped ZenBook 13 UX325 and ZenBook 14 UX425 still retain their title as the world’s thinnest 13-inch and 14-inch laptops with the former measuring in at 13.9mm and the latter 13.9mm thin while retaining a full suite of ports that include a full sized USB 3.2 Type-A, a HDMI port as well as a pair of Thunderbolt 3 Type-C ports. They look quite similar to the earlier versions that we reviewed including the handy NumberPad. 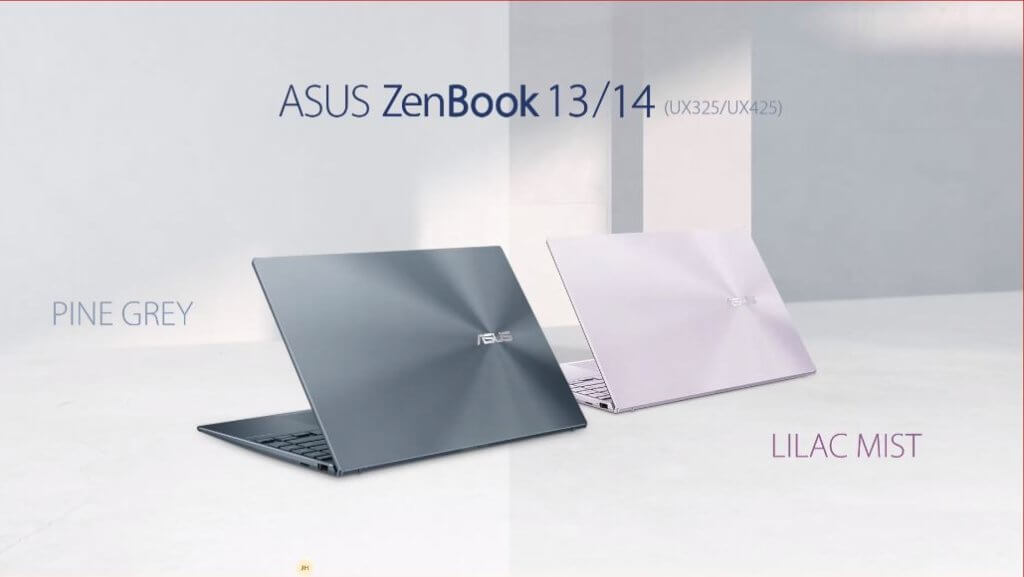 The ZenBook 13 UX325 comes in Core i5 and i7 versions that are mostly similar save for different CPUs at different price points. Regardless of CPU, you’re getting a 13-inch Full HD display, Intel Iris Xe graphics, 8GB RAM and a 512GB SSD along with a free copy of Office Home and Student. The Intel Core i7-1165G7 version retails for RM4,699 while the Intel Core i5 version retails for RM3,999. 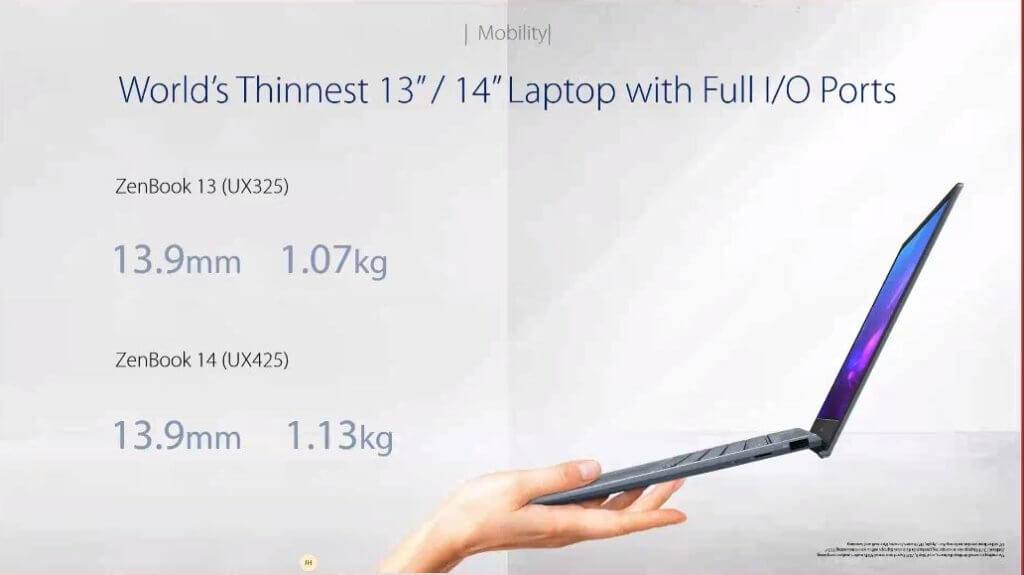 The slightly larger ZenBook 14 UX425 has two similar configurations like the UX325 save for a larger 14-inch Full HD display. It retains a similar 8GB RAM, a 512GB SSD, Intel Iris Xe graphics and your choice of either an i5 or i7 processor. That means that both the 13-inch and 14-inch versions of the ZenBook cost the same; it’s simply a matter of which size and which processor suits you best. 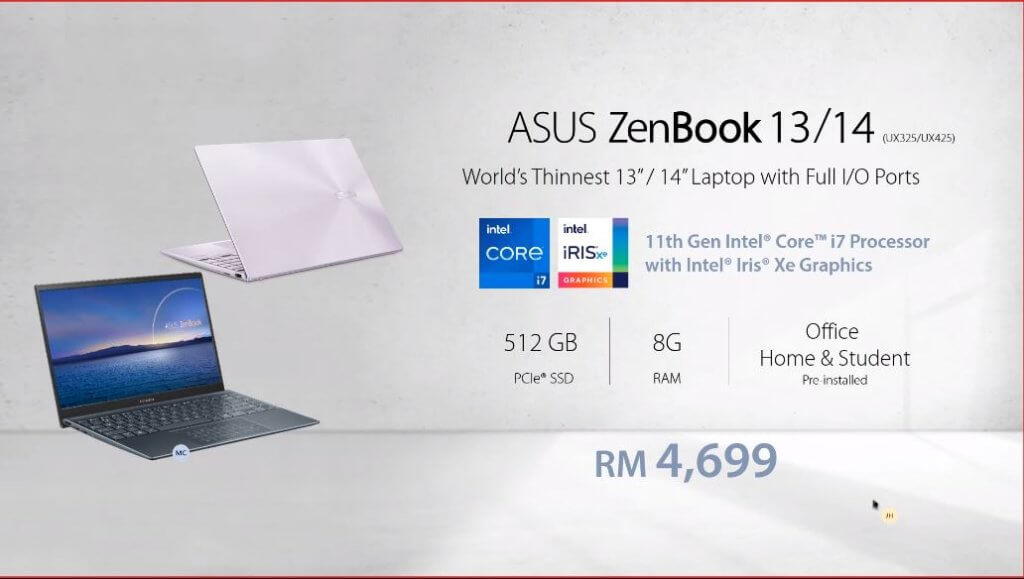 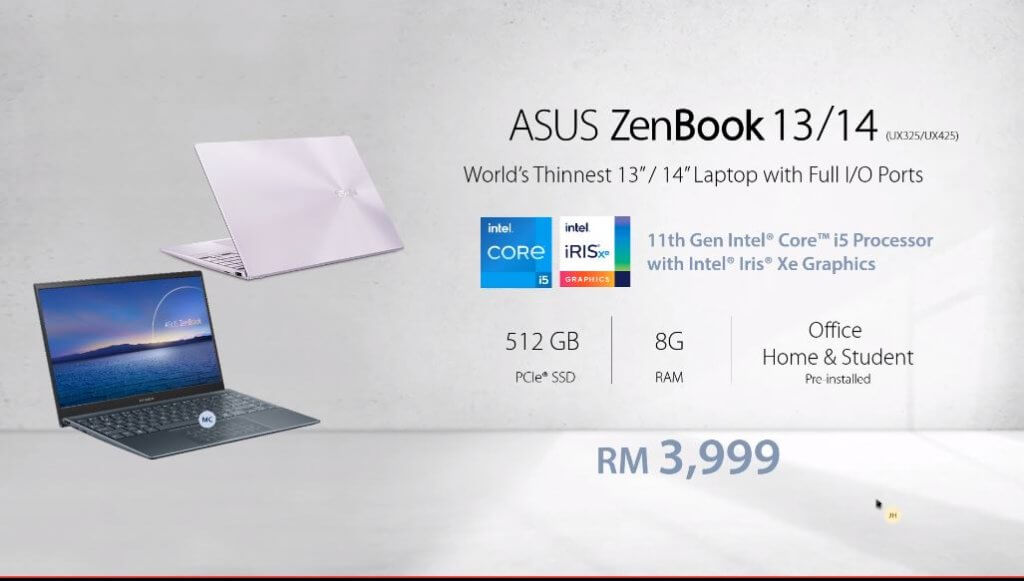 Much like the earlier VivoBook S15 series that we tested, the new range retains a similar form factor and aesthetics with a couple of new colour choices and the notable inclusion of the new 11th Gen Intel Tiger Lake processors along with a new firmware/hardware solution dubbed ASUS Intelligent Performance Technology (AIPT). 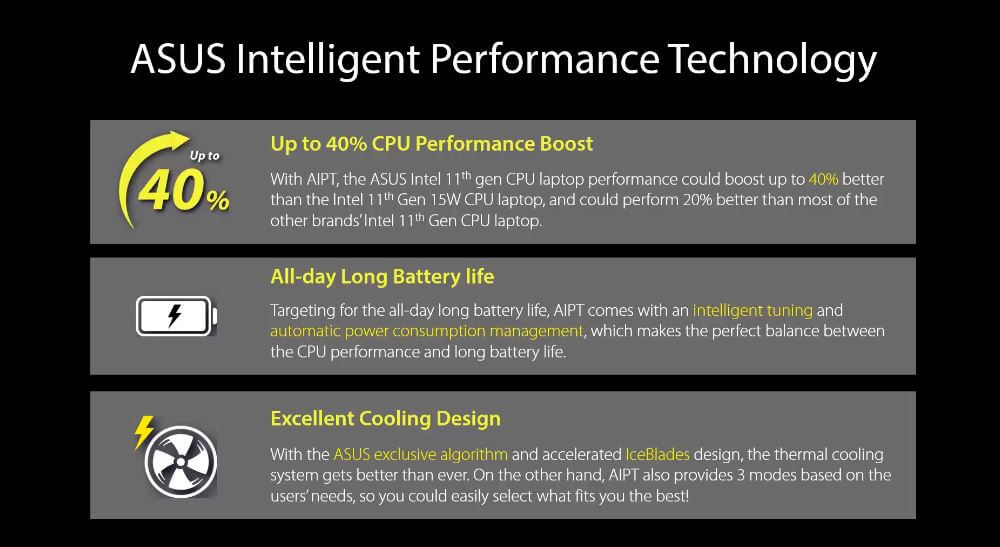 This ASUS AIPT works in tandem with the new 11th Gen Tiger Lake CPUs to offer better performance across the board. There’s also a unique, 28W high-performance sustained Performance mode that allows it to tackle demanding tasks with a rated 40% increased performance over a typical non-AIPT enabled model. Oddly enough, AIPT is only available on the VivoBook series for now; the latest ZenBooks don’t have this feature just yet.

ASUS has also added an enhanced IceBlade fan to the VivoBook’s design that is made of a liquid crystal polymer alloy that is just 0.2mm thin, allowing it to cram 87 fan blades per fan into the chassis. This is also on top of a larger 8mm width heat pipe versus the older 6mm in last year’s VivoBooks. Basically, all this ensures better sustained performance over time for a host of general tasks 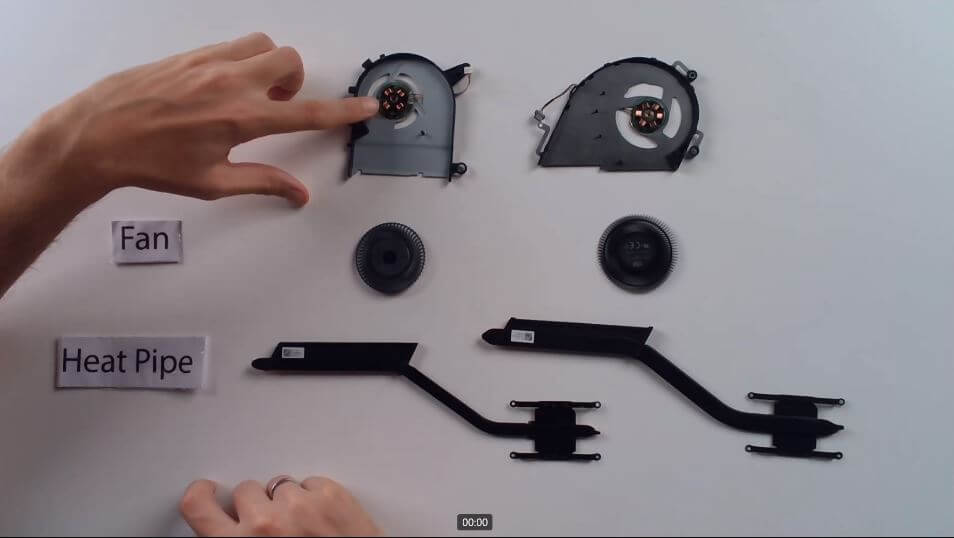 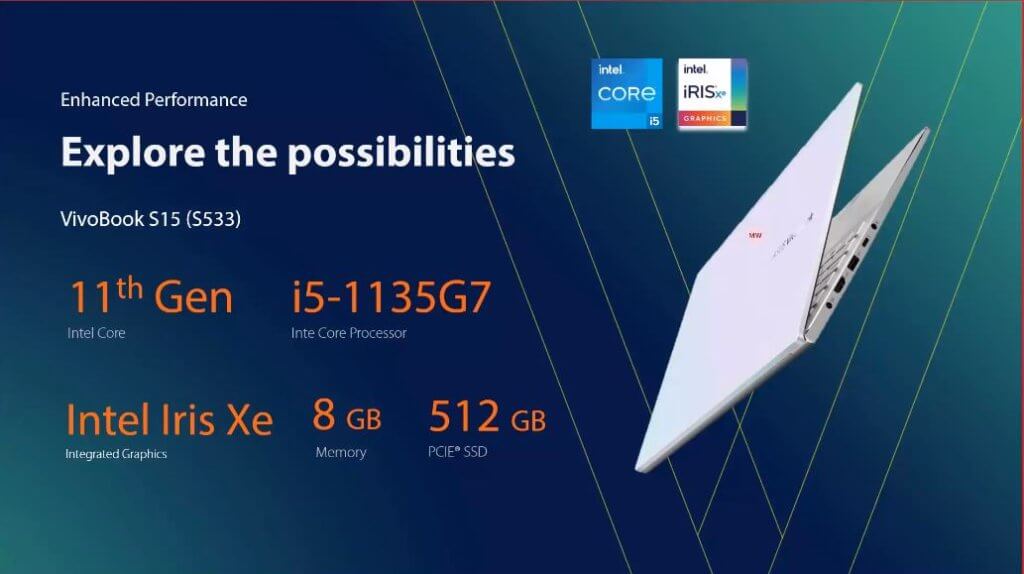 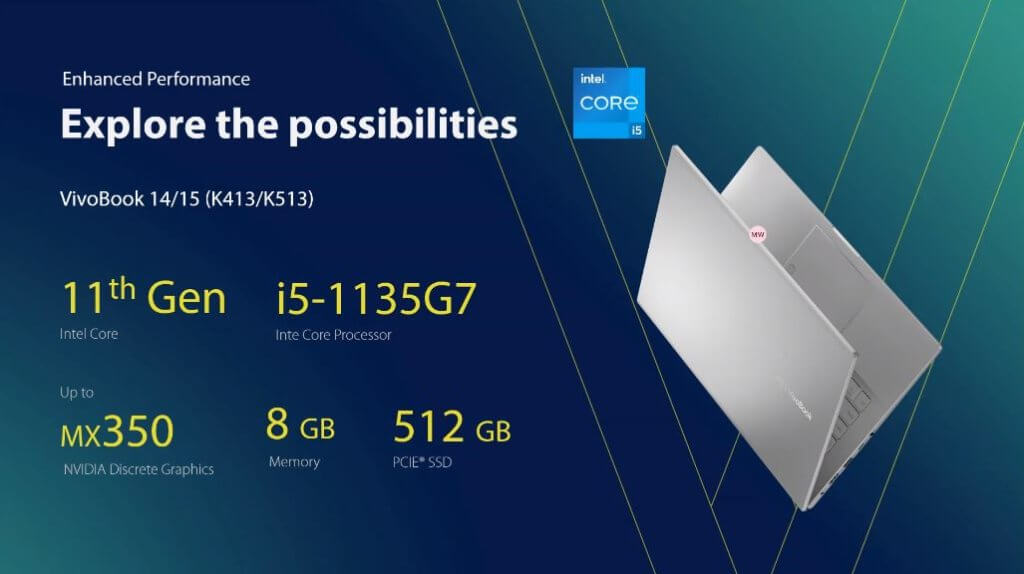 The entire new range of notebooks will be available from ASUS’s retailers and their online Shopee store at https://shopee.com.my/asus_laptop.os 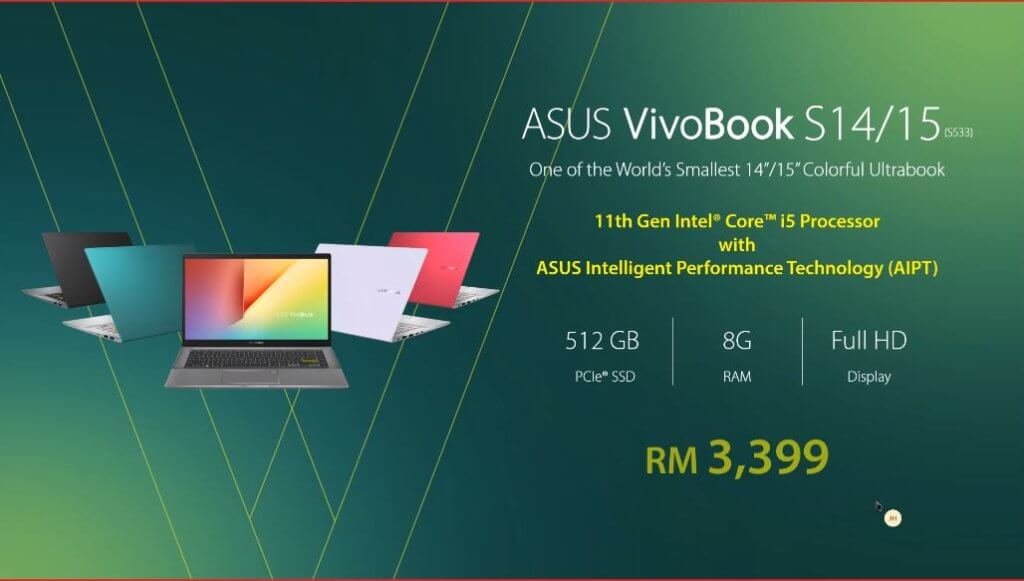