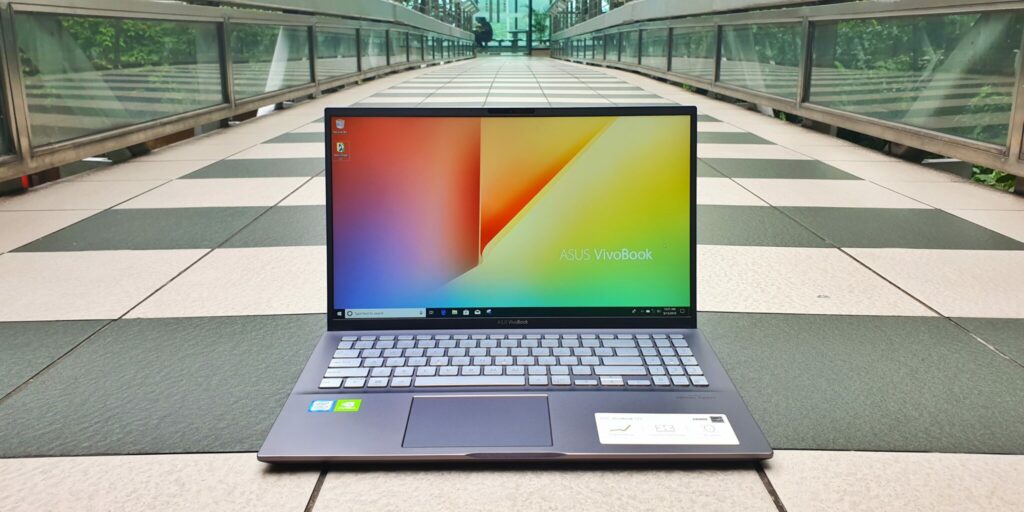 There’s an unquenchable demand for affordable, decently specced notebooks if the plethora of offerings available out there are any indication. Some manufacturers cut corners by using cheap plastic, making the chassis look like a Tonka toy while others skimp on other niceties like ports, the battery or the display. Fortunately, Asus has gone for the high road with the latest addition to their VivoBook notebook series in the form of the VivoBook S15 S531F notebook that strikes a fair balance between utility and performance while keeping the price tag at a reasonable figure.

Over the years, we’ve reviewed several incarnations of their VivoBook line and their latest one doesn’t wander too far from the established aesthetics and design of its forebears. The VivoBook S15 S531F boasts of a more refined and premium looking finish culled from the higher-end ZenBook series and has a refresh of its processor and graphics card while leaving its generous array of ports intact. It’s actually more akin to the unique S15 variants we saw earlier this year at Computex 2019 albeit reworked slightly without the new ScreenPad touchpad, presumably to keep costs down. 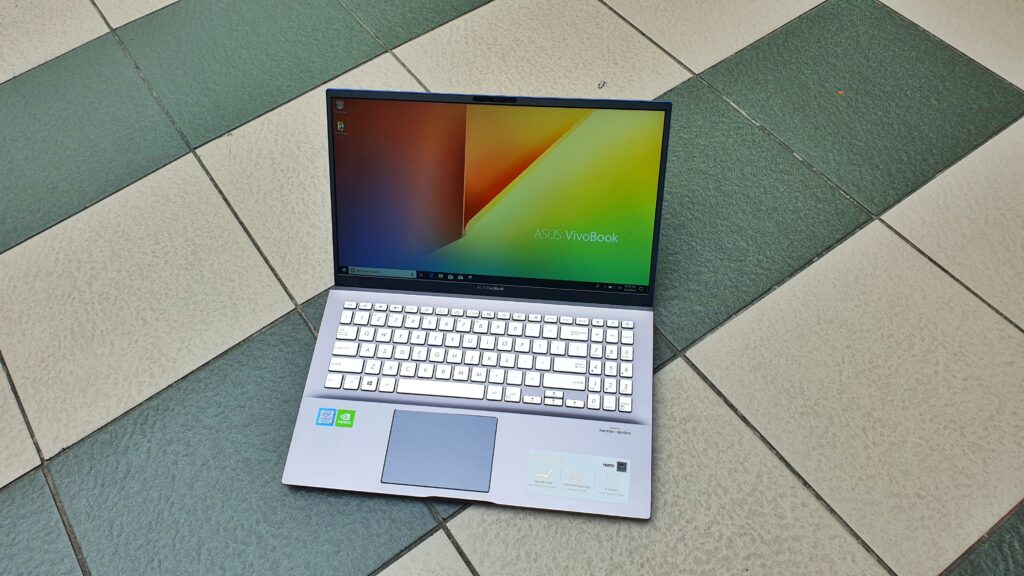 Externally, the VivoBook S15 S531F strikes a very attractive look indeed with sleeker, more angular lines that lend it a rather businesslike air. Unlike its older predecessor the S15 S530 that had a brushed metallic finish, the S531F comes in a matte dark metallic Gun Metal finish complemented by a subtle ribbon of blue trim around the top lid. The finish itself is gratifyingly fingerprint resistant which removes the need for constant wipedowns.

The top lid is hewn from a single stamped sheet of aluminium. This raised Ergolift hinge is a helpful Asus design innovation that helps to lift the bottom of the VivoBook for both better ventilation and for a better typing experience.To make it easier to deploy, Asus has also carved in a slight recessed lip near the front of the laptop to make it easier to open though you still need a two-handed grip to open it. 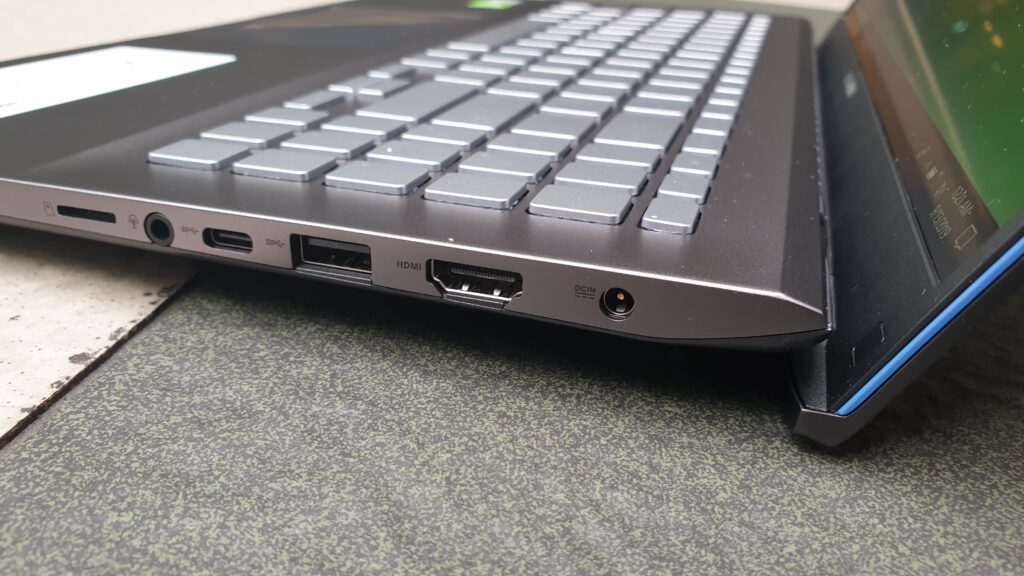 Flipping the top lid open revealed an exceptionally sturdy hinge mechanism with nary a bit of wobble and the Ergolift hinge works as it says on the tin, lifting the notebook up slightly to make it easier to type while offering clearance for the underside ventilation grilles.

For the VivoBook S15 S531F, Asus has kitted it out with a full-sized white backlit keyboard complete with a numeric keypad on the right and a generously sized touchpad placed slightly off left of center. This is bordered by a silver coloured frame and palm rests, which complement the external Gun Metal finish. Another notable difference is the omission of a fingerprint reader in the touchpad which the older S530 had and which the updated S531F omits. The S15 S531F also comes with Intel WiFi 6 802.11ax with Gig+ performance and an IR camera for logging in. 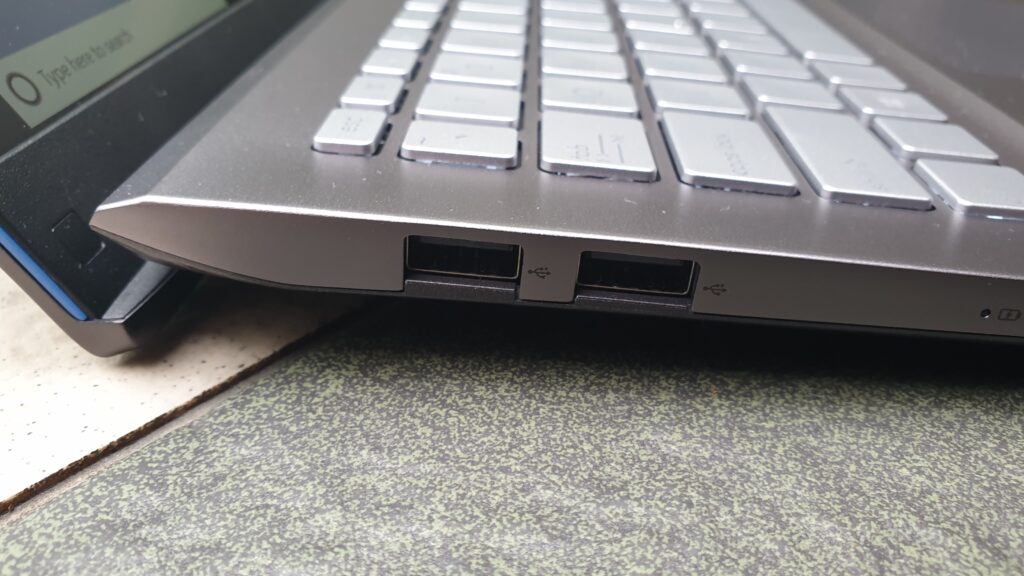 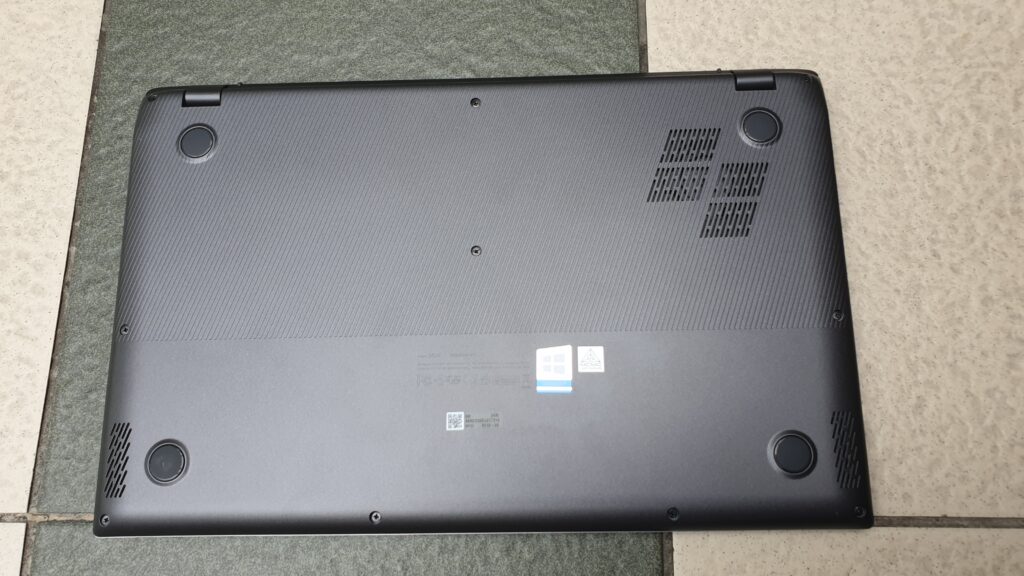 In terms of build quality, the VivoBook S15 S531F does not disappoint with sturdy build quality befitting its predecessors but where it takes things a notch above its competitors is its aesthetics with its redesigned top lid and external chassis lending it a more premium look than what its price tag would suggest.

While we have reviewed prior incarnations of the VivoBook S15 series, including the darned good S15 S530 last year, this year’s version has a modest hardware refresh across the board that keeps it current.

For this year’s model, they have opted for an 8th generation Intel Core i5-8265U 1.6GHz quad-core processor that can Turbo Boost to 3.9GHz paired with an NVIDIA MX250 graphics card with 2GB GDDR5 VRAM. In terms of memory, the S15 S531F comes with a somewhat sparse 4GB DDR4 2,400MHz RAM crammed onto one SODIMM slot with another spare one available as an aftermarket upgrade option. For storage needs, it comes with a 512GB PCIe SSD along with an empty expansion slot.

We’ve yet to encounter the less powerful MX250 in any notebooks we’ve tested so far but based on its predecessor the MX150 GPU, which had a similar high powered and lower powered version, there’s about a 30% difference in performance between the higher and lower variant. 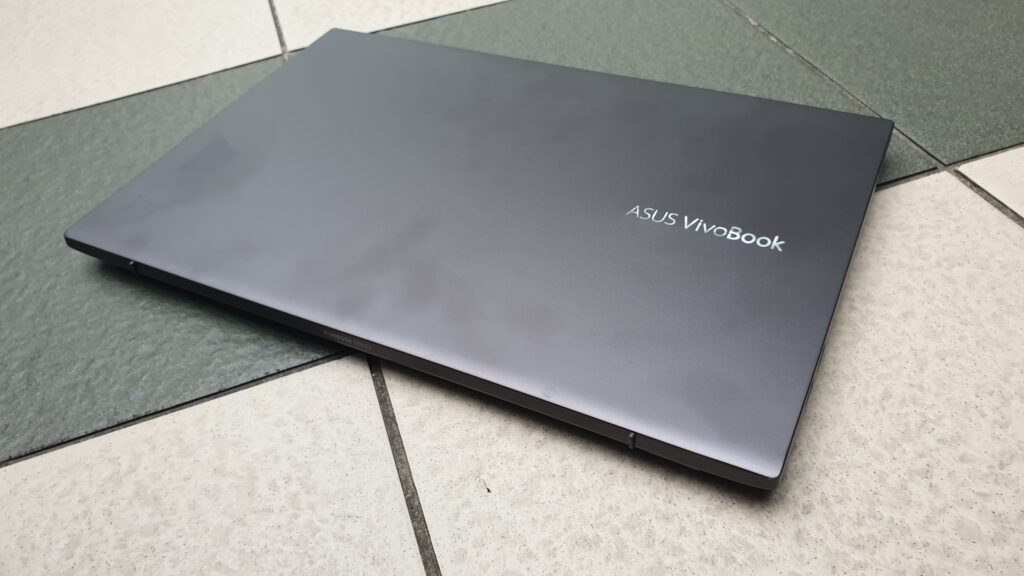 This configuration is a modest step up from last year’s variant that had a i5-8250U processor, 4GB RAM, an NVIDIA MX150 and an SSD plus hard disk combo storage option. At the time of print, we’ve yet to discover the other possible storage or processor variants available beyond what our test unit had but what you get with this particular variant of the S15 S531F is a workhorse with room for expansion for additional RAM and storage later on.

In terms of synthetic benchmarks, the S15 S531F did a decent job with slightly improved scores over its generational predecessor. In 3DMark Time Spy, it got a slightly better score of 1,227 while in PCMark 10 it snagged a score of 3,243 points. In CineBench R20, the CPU scored a rating of 1,134 points. In the Unigine Superposition benchmark, it was only able to run at a maximum of 1080P medium settings and yielded a score of 2,529 points.

The S15 S531F’s single 512GB PCIe SSD was formatted by default with one partition housing the OS and all available storage performed quite well on CrystalDiskMark with read speeds of 1874.6MB/s and write speeds of 984MB/s. 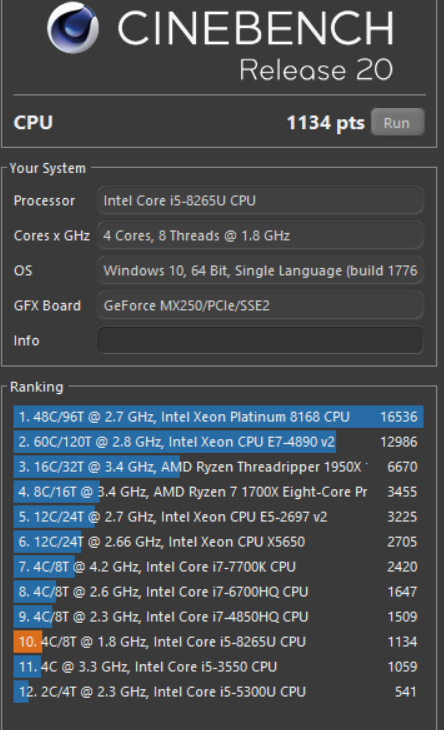 This array of hardware lends the S15 S531F a mission profile ideal for general work across the board. It’ll handle a modest array of basic spreadsheets, a good twenty or so open Chrome browsers and, in a pinch, PUBG on low 1080P settings though you’ll really need to upgrade the RAM to see its full potential. Even with extended use, the efficient heat management combined with the relatively efficient i5 processor and Ergolift hinge helped kept the heat down to a very manageable level to barely more than a mild warmth so using it on your lap for a few hours should not result in charbroiled thighs. 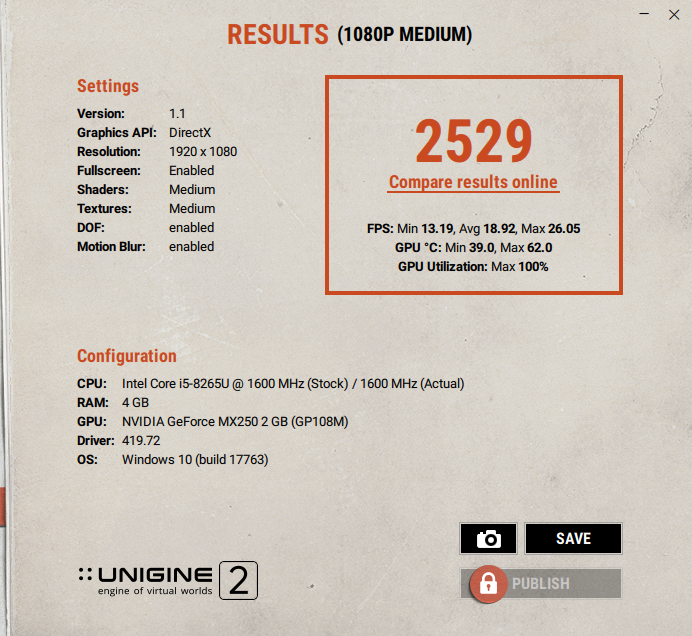 A good keyboard can make or break a notebook. Fortunately the S15 S531F builds on what its predecessors offer and its full sized keyboard which had 1.4mm key travel offered a pleasant typing experience with the additional numeric keypad proving helpful for crunching spreadsheets. The white backlighting isn’t on a per key basis but it’s more than sufficient to see each and every key for work under dim light conditions. 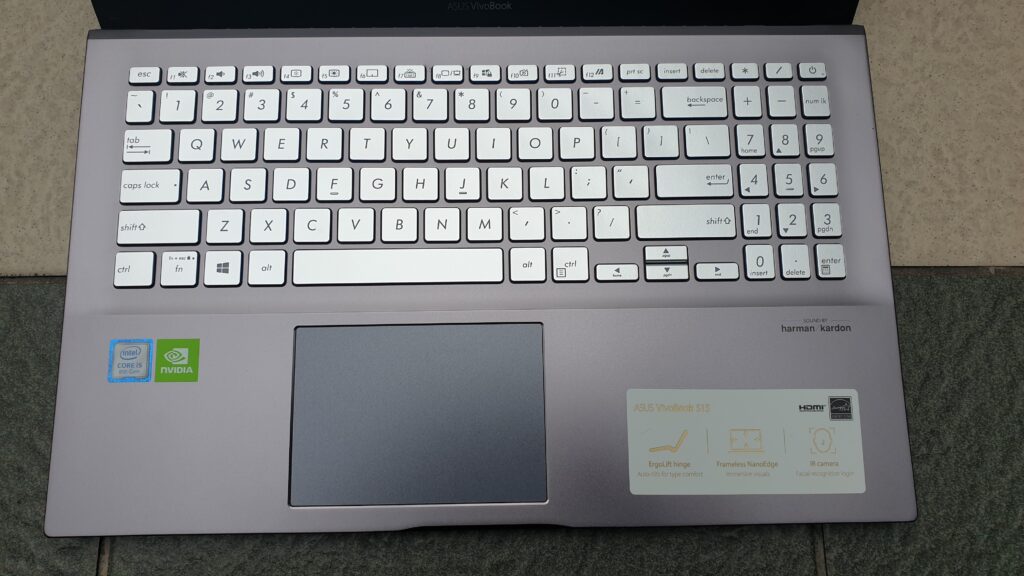 The touchpad was well built with a mirror-smooth texture that allows for fingers to effortlessly glide about its expanse. It proved responsive and capable of accepting the usual array of multi-touch gestures to get about Windows 10.

The provided 15.6-inch Full HD NanoEdge display had performance parameters similar to its predecessor with good colour rendition and sharpness along with relative clarity under daylight conditions. The downward firing speakers likewise proved akin to the S530 and had pretty good volume and clarity.

The notebook sports a 42Wh 3-cell lithium-prismatic battery which was similar to what we field tested in the S15 S530 last year though our test unit then had an Intel Core i7 CPU. The S15 S531F’s Intel Core i5 processor managed to chug along slightly longer for about 6 or so hours minutes on a balanced user setting that involved moderate screen brightness, WiFi on all day, web browsing, some YouTube, liberal amounts of paperwork and social media. You’ll need to go find a charger pronto afterwards though the notebook has fast charging capability with 50 minutes getting you a 60% charge.

Naturally this estimate of battery life varies greatly depending on what you do and if you’re attempting to use it for gaming or max out the screen brightness settings, it’ll likely call it a day much faster than what we experienced. With fairly prudent usage and if you avoid gaming or other fairly intensive tasks, it should be sufficient for a day outside of the office. The fast charging worked as advertised, juicing the notebook up from dead zero in 50 minutes to about 61% and to a full charge in about an hour and a half or so. 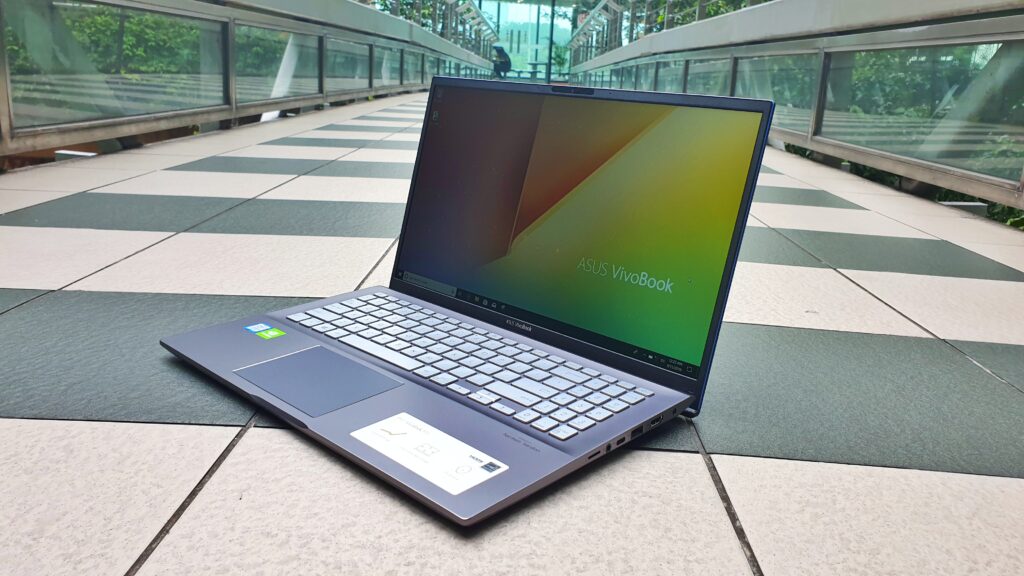 As it stands, the VivoBook S15 S531F is a more refined offering with refreshed hardware and more pleasing aesthetics that lives up to the hallmarks of the VivoBook brand – a solid combination of performance and fair battery life. The provided 4GB RAM is the bare minimum and it is best if you upgrade it when you have the means to do so which adds a couple hundred more bucks to its modest price tag. If you’re looking for an entry level workhorse with good bang for the buck, the VivoBook S15 S531F is right up your alley.

What we liked Excellent build quality, good display, decent hardware for price, generous variety of ports
What we didn’t Needs more RAM, middling battery life
We say The latest Asus VivoBook S15 S531F is ideal for those seeking bang for the buck as it blends a large 15.6-inch Full HD display, an 8th Gen Intel Core i5 processor, an NVIDIA MX250 GPU and a nippy SSD into a good looking chassis for just slightly over RM3,000. If you can live with the middling battery life and beef up the RAM, this notebook proves to be a worthy workhorse that offers great value and performance for what you pay for.