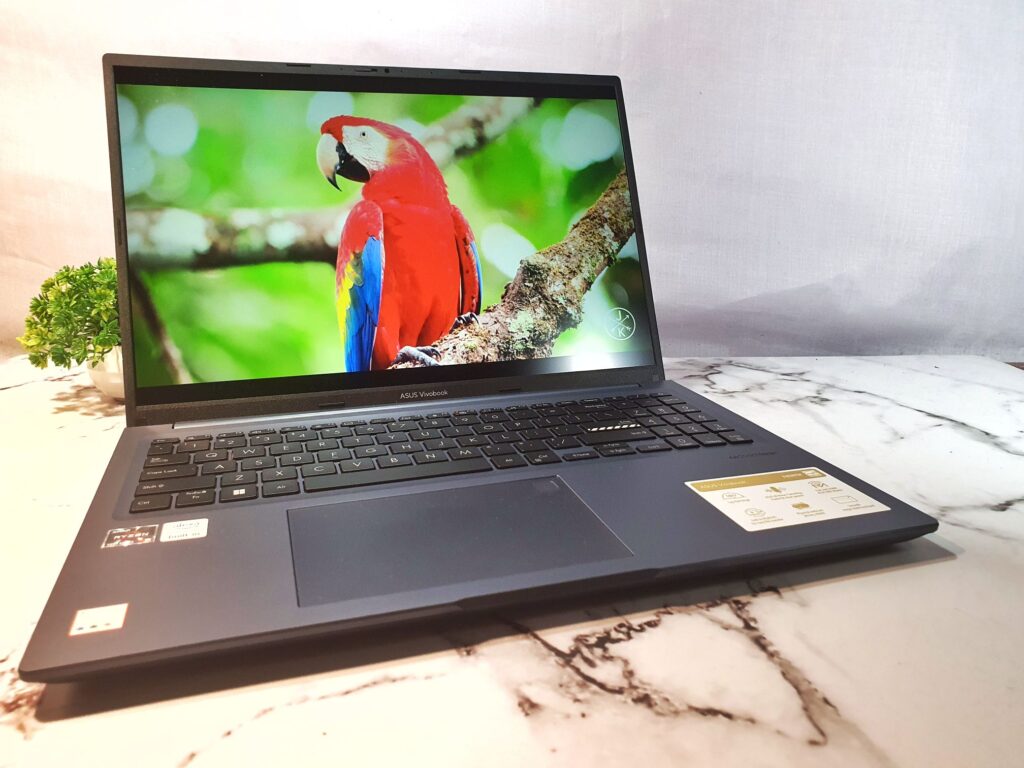 It has been said that there is a product for every man and a man for every product. In the case of the ASUS Vivobook range, they’re ensuring that everyone has something in their line-up that suits their taste and budget.

With a similar AMD Ryzen 5 5600H CPU as its sibling the Vivobook 16X OLED M1503 but with a lower price tag and a larger  LCD display, the VIvobook 16X attempts to tweak the formula and specifications a bit more for those on a budget but is it worth it? Here’s our ASUS Vivobook 16X review where we put it to the test!

The ASUS Vivobook 16X has all the general aesthetic hallmarks of the 2022 generation of VIvobook laptops like a matte metal grey finish and mostly polycarbonate chassis but closer inspection reveals that it bears a close resemblance to the earlier VIvobook 15X OLED aka model M1503 that we reviewed a while back in terms of overall aesthetics and port placement though it has been scaled up in width, size and weight to accommodate the larger IPS-LCD display.

The top lid is made of polycarbonate with a matte dark grey finish and the ASUS Vivobook logo emblazoned off centre. The finish resists fingerprints though there is noticeable give if you prod the centre portion of the top lid.

Where the top lid is noticeably metal, the underside is made of polycarbonate with a series of grilles for ventilation as well as the provided downward-firing stereo speakers and a series of raised rubber feet for airflow with the whole affair held in place by ten Phillips screws. While it is durable and functional, it unfortunately does look rather plasticky. 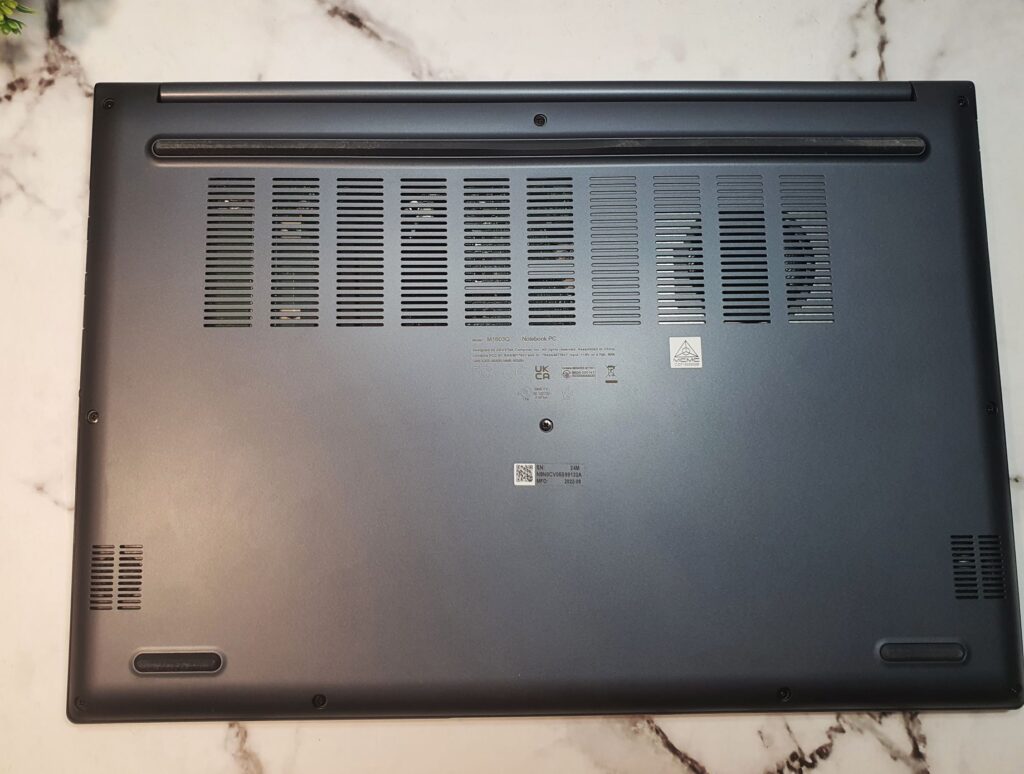 In terms of I/O, our ASUS Vivobook 16x review sample has a peculiar preponderance of ports on its right side, featuring a pair of USB 3.2 Gen 1 Type-A ports for plugging in peripherals, a 3.5mm audio combo jack, a HDMI 1.4 port for porting out to an external display, a USB 3.2 Gen 1 Type-C port and, quaintly enough a barrel-style DC-IN port for charging the laptop. 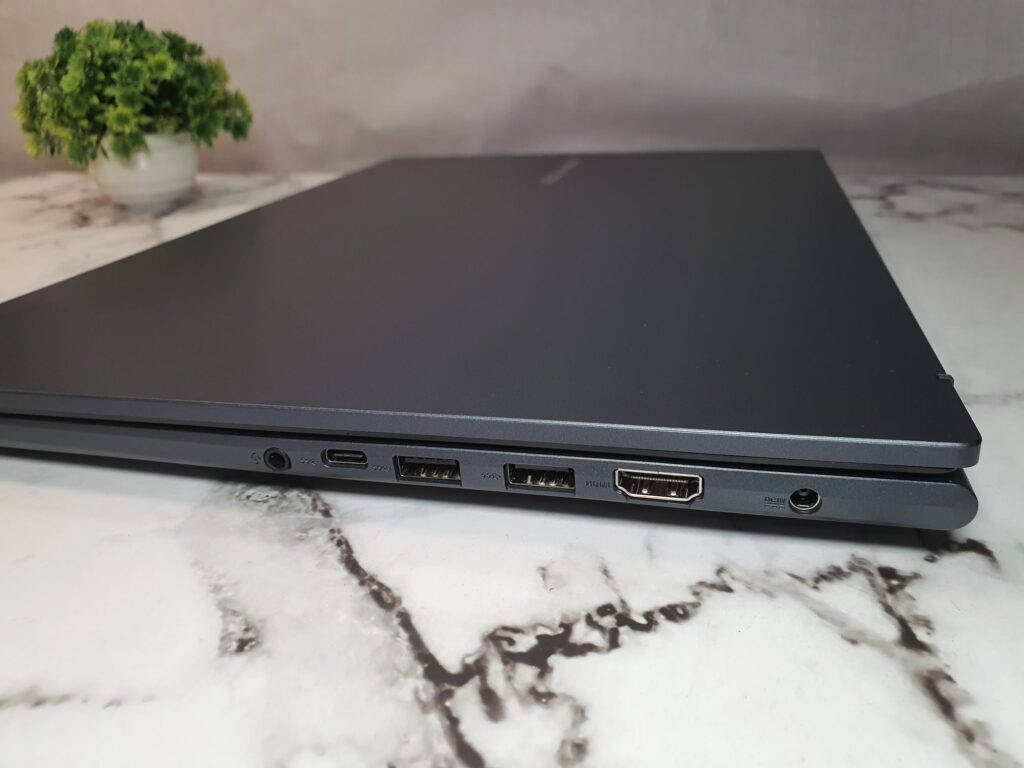 The left side of the laptop hosts a single USB 2.0 Type-A port. While this layout gets the job done, it does get in the way if users are looking to use an external mouse and the tight placement of all the ports means that you’ll have to be judicious in what you plug in. 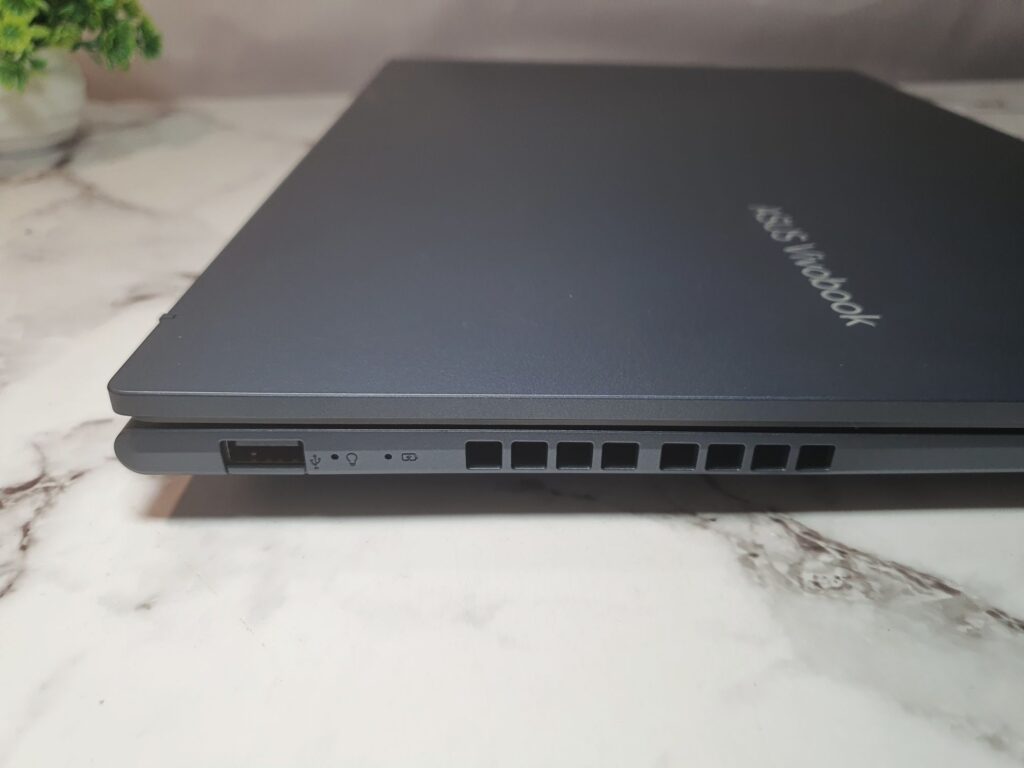 The hinges are quite stiff but they are able to fold 180-degrees flat in the off-chance you need to do so. While they’ve included a subtle indentation at the base of the laptop tray for easier purchase, opening it is a two-handed affair.

Flipping the Vivobook 16X open reveals its biggest draw – a full sized keyboard complete with a numeric keypad and a generously sized touchpad with a fingerprint reader inset in the corner framed by a polycarbonate keyboard tray that’s done up in the same finish as the top lid.

While it looks relatively well built, our Vivobook 16x review sample had minor gaps where the touchpad meets the frame that are large enough to slip a piece of paper.

We were assured this was an anomaly to the review unit rather than the norm. That quirk aside, the laptop is surprisingly rated for a MIL-STD-810H level of durability so it’s able to survive a modest amount of shock and drops.

Arguably the biggest concession to cost, the Vivobook 16X uses a conventional IPS LCD display albeit a large 16-inch model with a tall 16:10 aspect ratio and a conventional 60Hz refresh rate.

Brightness is modest at about 300 nits peak brightness and colour accuracy is an underwhelming 45% NTSC as opposed to its smaller sibling the 15X which uses a higher quality OLED display with almost double the colour accuracy. 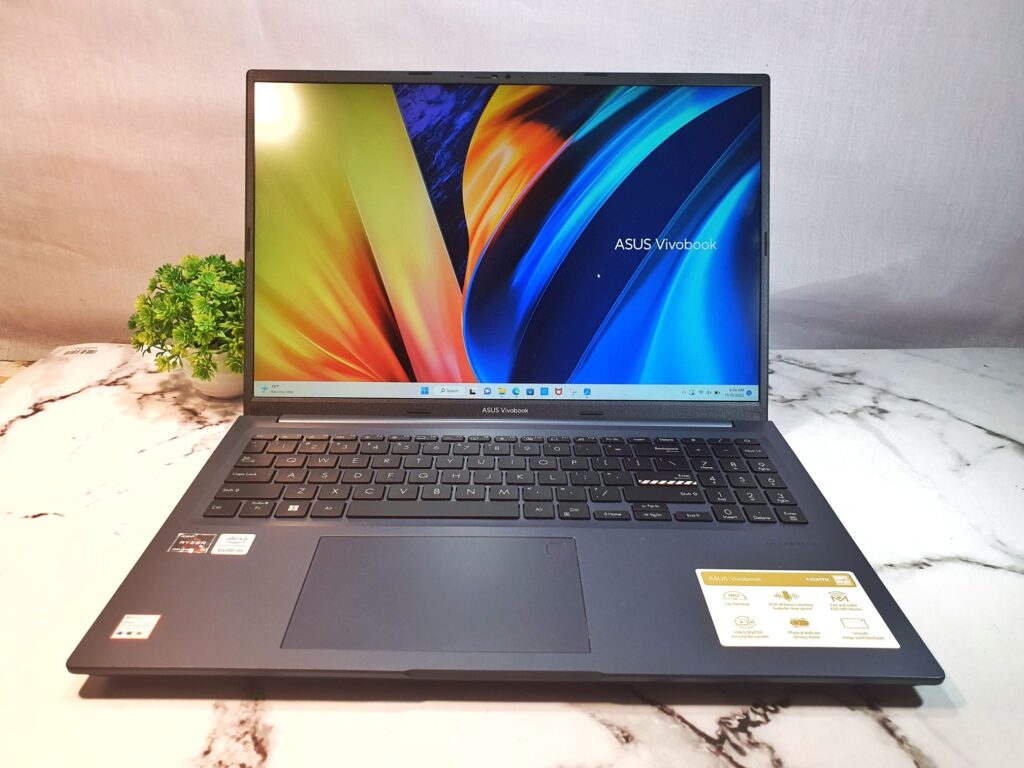 On the bright side, it’s effectively a successful implementation of a 16-inch display in a 15.6-inch chassis. Up top, the laptop features a 720P webcam with a privacy slider.

In general, build quality for our Vivobook 16X review sample is fair for what you pay for and should hold up to general usage though you shouldn’t be expecting miracles of engineering at this price point.

Under the hood, our  ASUS Vivobook 16x review unit for Malaysia has a set of specifications that are identical to the earlier VIvobook 15X that we reviewed earlier that employs the use of a midrange AMD Ryzen 5 5600H 4.2GHz processor with 45W TDP paired with AMD Radeon Vega 7 integrated graphics.

Like its distant sibling, the M1603 has 8GB LPDDR4 RAM with a spare SO-DIMM slot that allows you to add in up to 16GB of extra RAM and a single SSD slot with the laptop itself featuring a single 512GB SSD that also holds the Windows 11 OS. 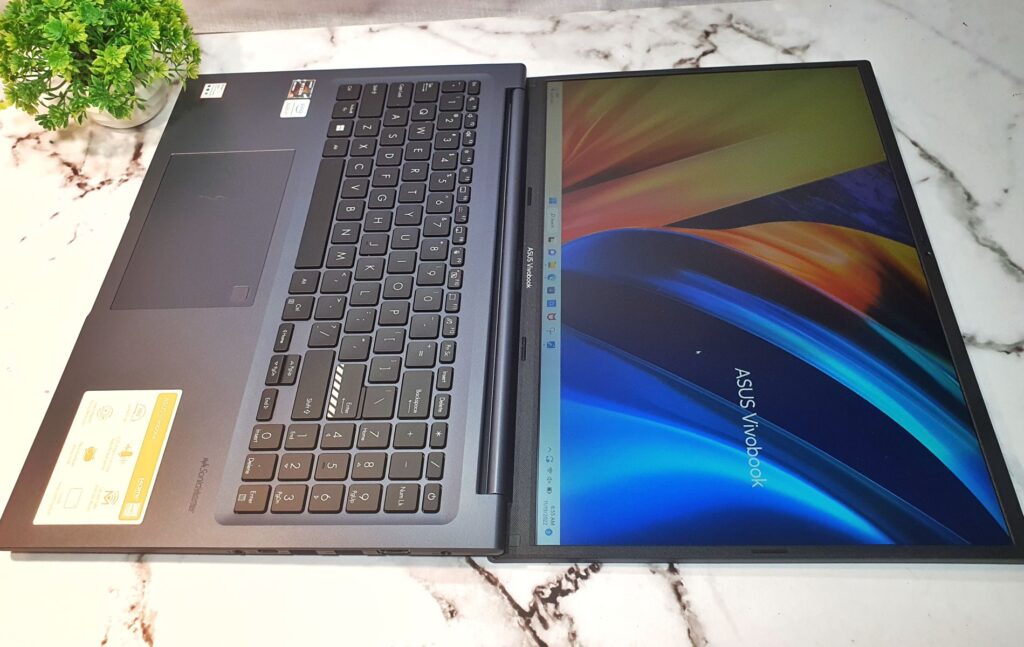 Connectivity is capped at WiFi 6 802.11ax and Bluetooth 5.0 with the provided I/O offering the possibility to output to a single 4K display. Where it differs from the 15x is the usage of a larger if less vibrant LCD display and the usage of a smaller battery. Here’s how it stacks up on paper:

Theoretically speaking, this grants it a performance envelope somewhat similar to the Vivobook 15X M1503; no surprise seeing as their CPU, RAM and other specifications are almost identical. When plugged in and with the laptop set to high performance settings, our ASUS Vivobook 16X review sample got the following benchmarks:

As you’d likely surmise, the performance envelope of the Vivobook 16X M1603 is somewhat similar to the M1503 though with slightly poorer battery life on account of the smaller battery. 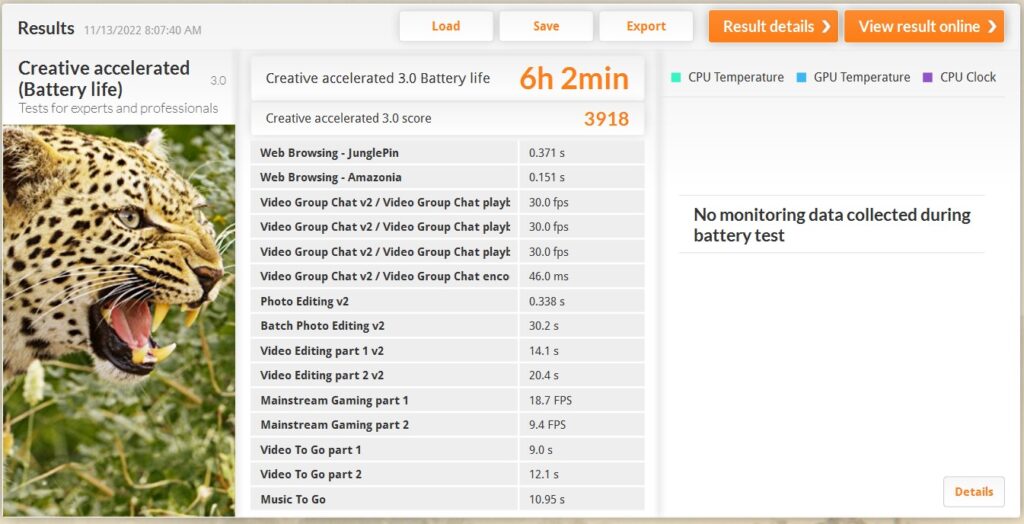 It’s still enough for the better part of a day’s worth of work though it’s still a prudent choice to tote the charger with you on the go.

In general, the stock configuration with its 8GB RAM is enough for web browsing with half a dozen open tabs in Chrome, basic word processing and the like though if you’re looking for anything more serious like multi-player photo editing or need a laptop capable of heavy multitasking, you will need to add more RAM. 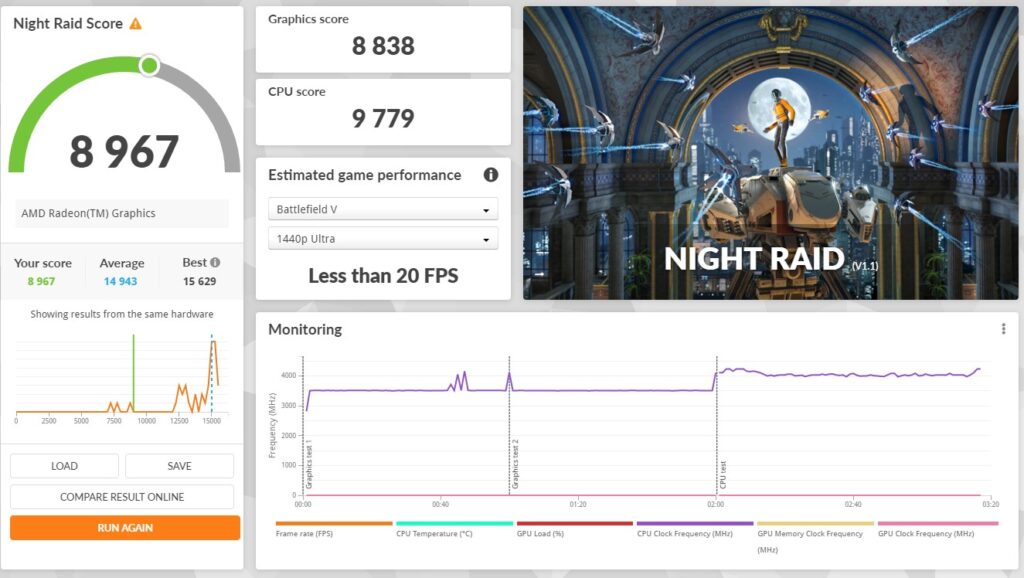 The provided LCD display is understandably not as vibrant nor as colour accurate as other OLED display equipped laptops made by ASUS but for what you pay for, you’re getting a large, relatively clear display that’s more than sufficient for general computing. 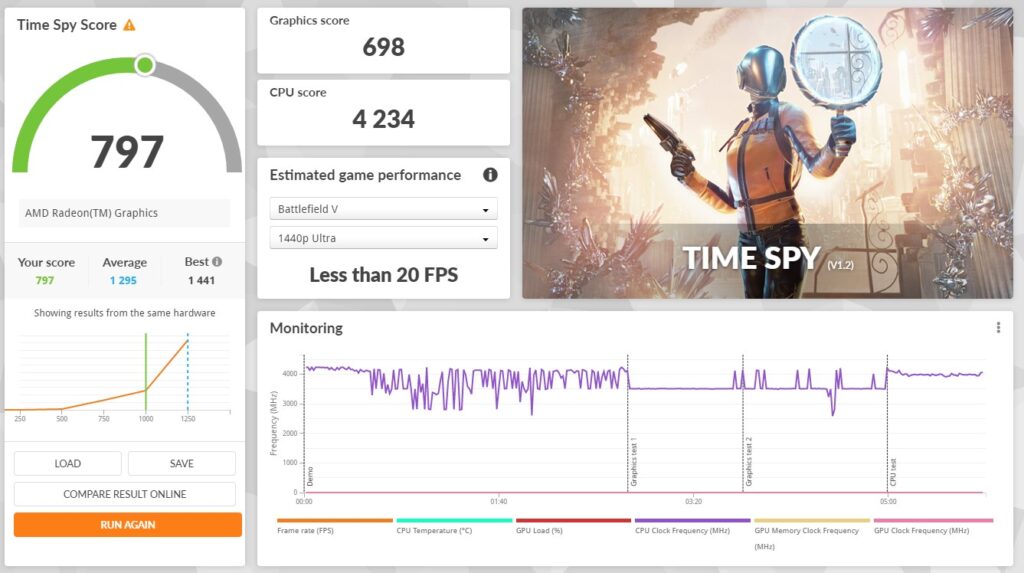 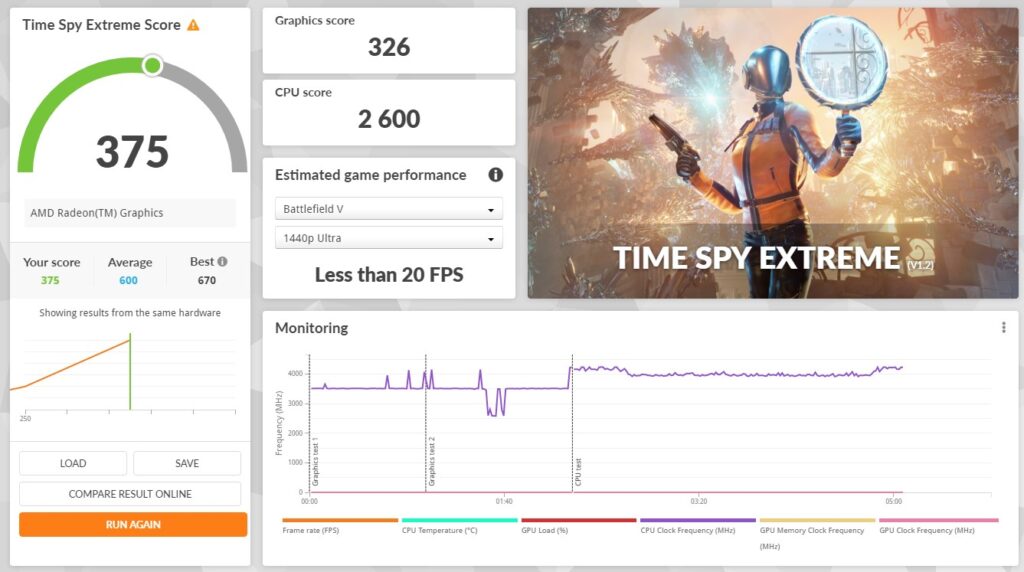 On that note, ASUS has fortunately included a free copy of Microsoft Office Home & Student installed on the laptop itself so it has immediate utility for students and for basic paperwork.

The combination of a sub RM3,000 price tag along with a large display, full sized keyboard and otherwise fair performance makes the Vivobook 16X M1603 ideal as a laptop for students and those seeking an entry-level computing platform. 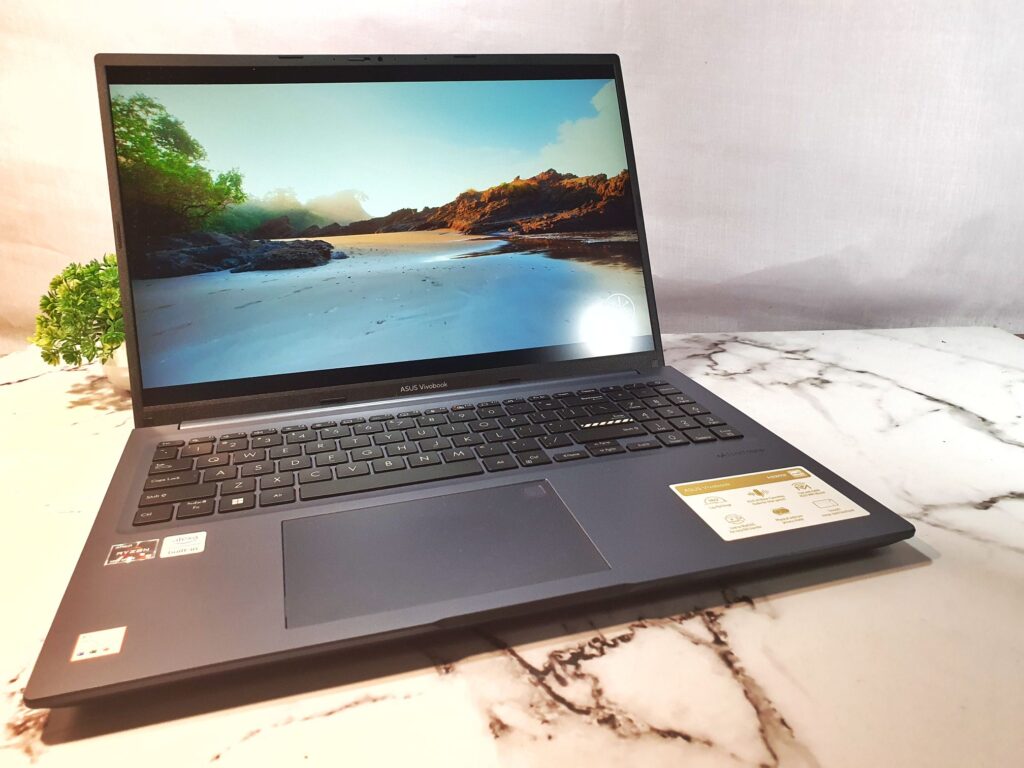 The ASUS VIvobook 16X M1603 is another addition to their workhorse Vivobook range that combines an AMD Ryzen 5 5600H CPU with a large 16-inch LCD display at a modest price point. If you’re looking for a budget laptop for light computing and don’t mind the cheaper display, this modest workhorse is worth a look.