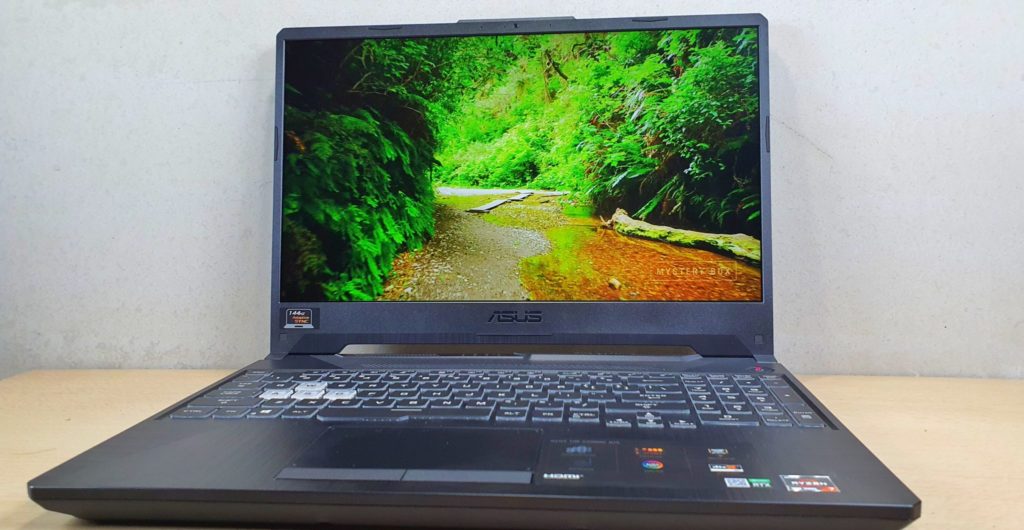 Launched recently in Malaysia and first seen at CES 2020, the ASUS TUF Gaming A15 notebook embodies two aspects of notebook design that we hold very dear to our hearts: value for money and durability.

Unlike many other competing notebooks, the ASUS TUF Gaming A15 eschews the use of Intel’s processors for the new 4th generation AMD Ryzen 4000 mobile processors paired with NVIDIA RTX series graphics. 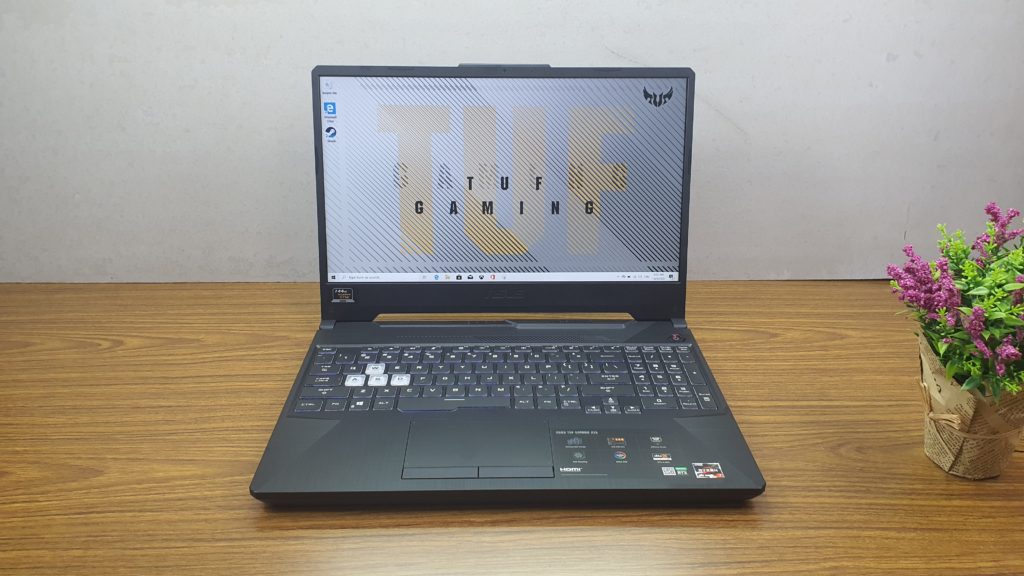 ASUS is also one of the few brands who have opted to ditch the ghastly looking approach of jamming every possible orifice and surface of the notebook with RGB lighting and have instead opted for a more practical, military-esque aesthetic which we appreciate.

Externally, the ASUS TUF Gaming A15 has a distinctive angular silhouette with a ruggedised chassis made of polycarbonate and metal finished in a shade of Fortress Gray with matte black trim all around.

In keeping with its rugged sensibilities, the finish repels fingerprints nicely though the whole affair is a bit chunky and on the heavy side for a gaming notebook at 2.3 kilos. This hasn’t even factored in its power pack which also weighs a good kilo on its own. 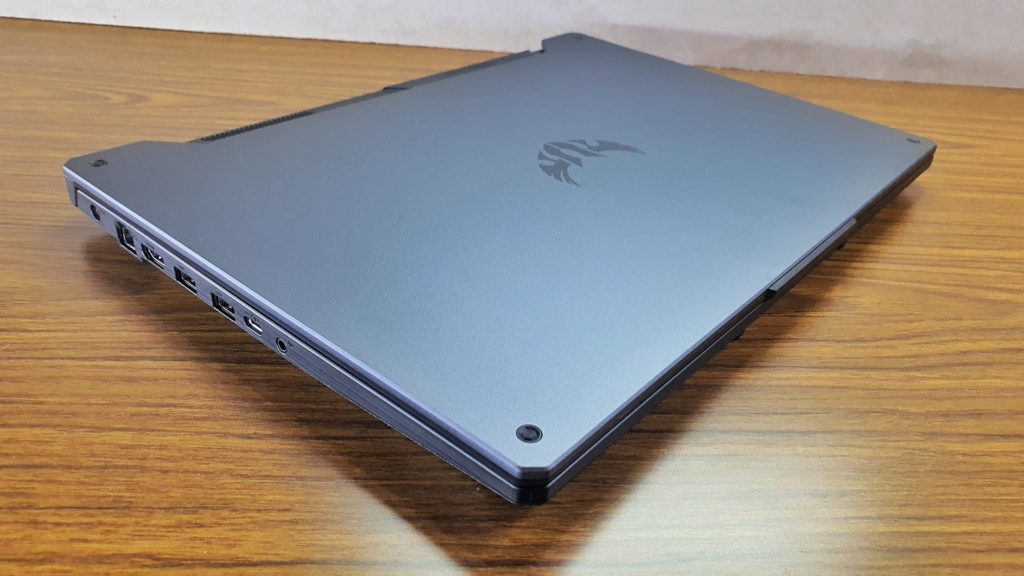 To offer additional structural reinforcement and durability, ASUS has designed a unique honeycomb like framework on the interior that reinforces the chassis while offering some weight savings. They’ve also mirrored this as an aesthetic touch on the underside of the notebook. In keeping with its gaming pedigree, the notebook adds in a pair of downward firing speakers placed on the underside approximately where the palm rests are. 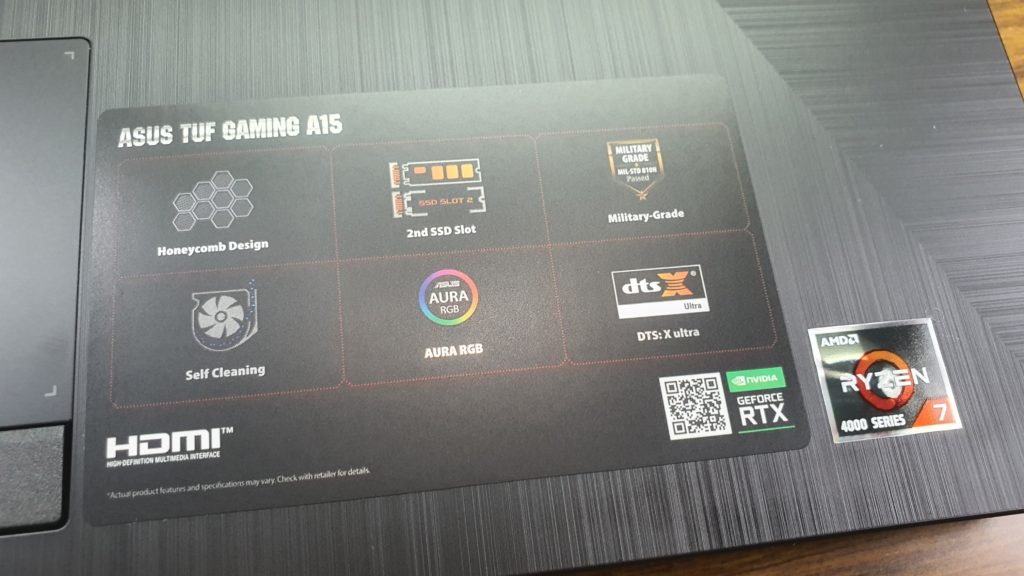 One interesting aspect of the TUF A15’s design is its angular cut off corners on the edges. They aren’t merely a design affectation as they help to minimise edge-on impact damage in the case of drops.

If you had a single edged point like on the corner of a monitor or phone, it concentrates all that impact damage onto one point which can cause significant damage; it’s a subtle but ingenious design feature. 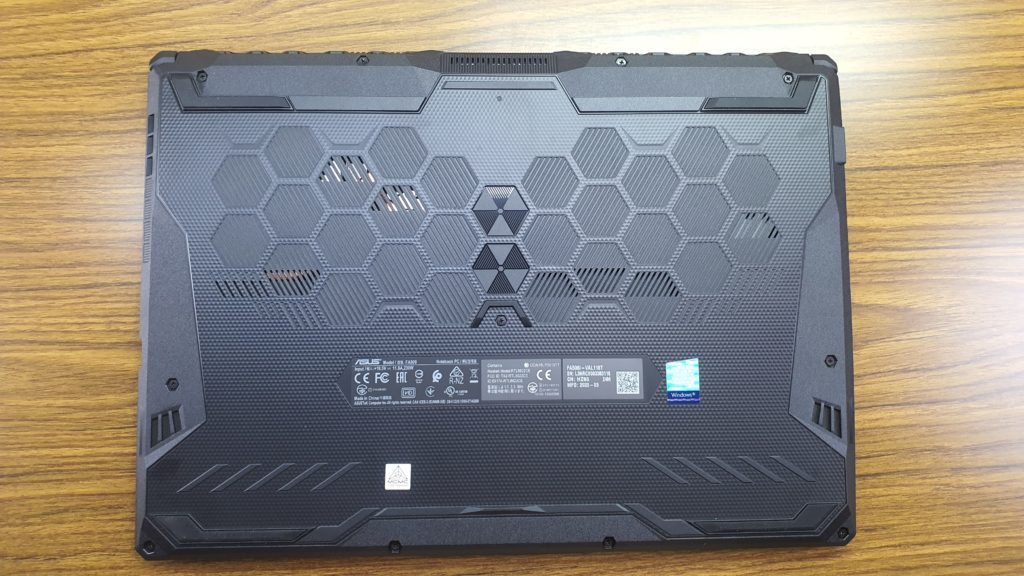 According to ASUS the TUF Gaming A15 is rated for MIL-STD-810H for drops, vibrations and extreme temperatures, all of which would turn other notebooks into expensive art deco sculptures. While we certainly can’t put this to the test with a review unit, this offers owners extra peace of mind.

Flip the lid open and you can appreciate the amount of engineering that has gone into the hinges as they’re built like a tank without any wobble. The hinge mechanism itself is extremely smooth but needs two hands to open as the base jerks up slightly if you attempt to open it one-handed.

The top lid itself which is shod in aluminium is similarly robust without any give or play while offering beautifully slim bezels on all three corners save for the bottom to ensure structural durability. To add to the tough look, each corner of the top lid also has a faux screw printed into its though it’s purely for aesthetics. 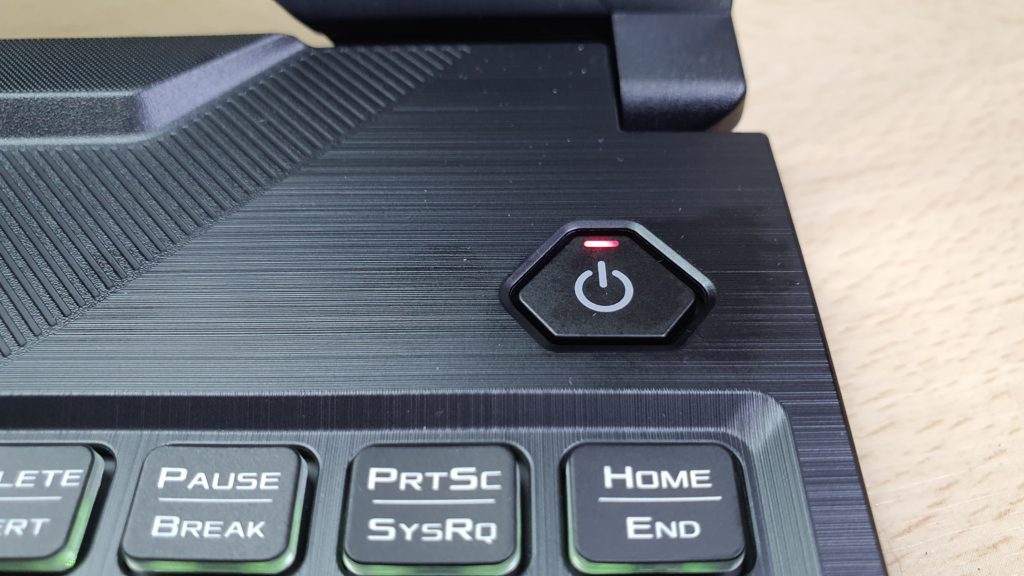 This hexagonal motif is extended to the TUF Gaming’s striking looking palm rests which have brushed chrome accents and its honeycomb-shaped power button. To their credit, they’ve managed to integrate a full sized keyboard here with a dedicated numeric keypad and translucent W,S,A and D keys for FPS gamers as well as a slightly longer than usual space bar. 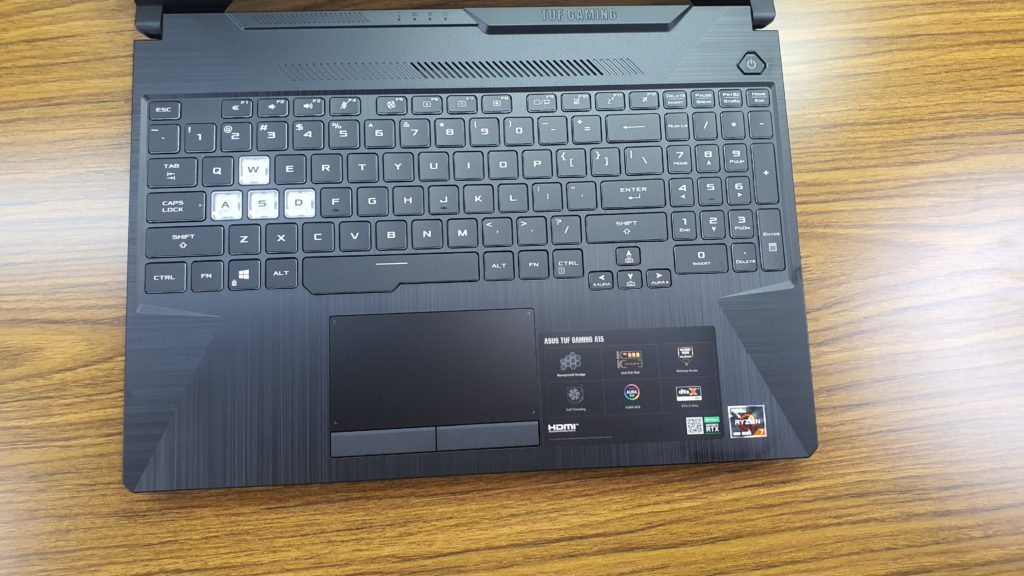 The only concession to RGB lighting on the TUF Gaming A15 here is its keyboard which offers simple single-zone backlighting that can be tweaked via the ASUS Armoury app and Aura Sync support to change colours on cue with other RGB-embellished ASUS hardware. You can pick from over a million colours under the rainbow.The only downside is that it lacks per key lighting but that’s not an issue in our books. 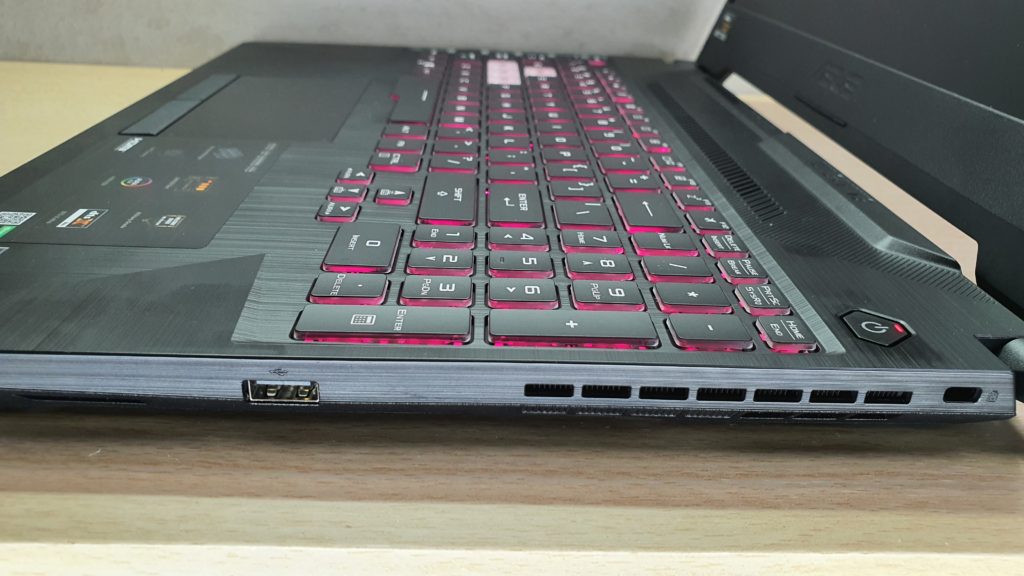 Aesthetics aside, ASUS has put a significant amount of thought into port placement with the right side, which traditionally has a mouse plonked next to it mostly bare save for a single USB 2.0 Type A port as well as a Kensington lock slot. 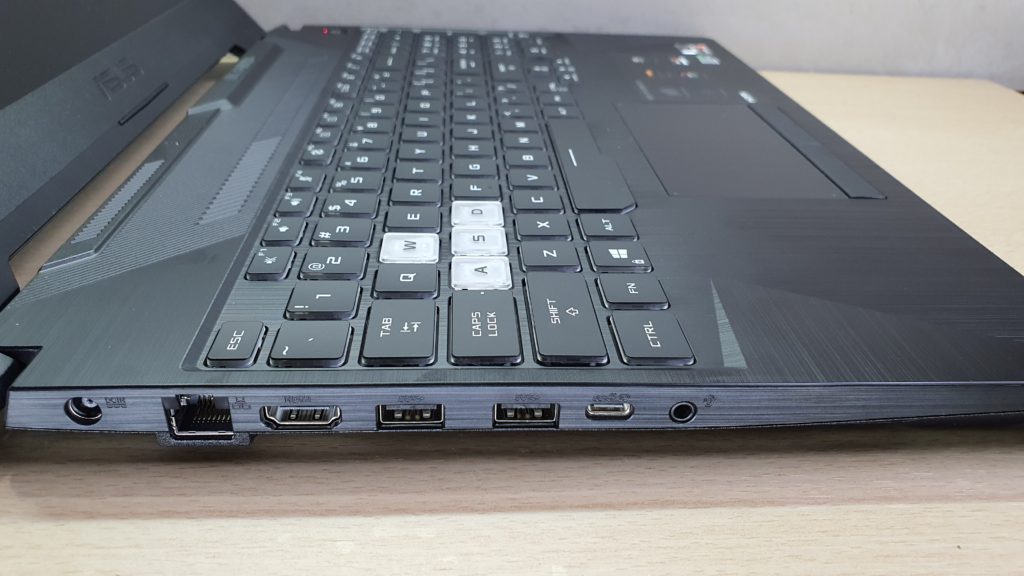 The left side of the notebook is where the action is at with the DC-IN for power, an Ethernet port, a HDMI 2.0b port to plug in another monitor, projector or TV, a pair of USB 3.2 Ge 1 Type A ports and a single USB 3.2 Gen 2 Type-C port which lets you project a feed via DisplayPort 1.4 alternate mode to a G-SYNC capable monitor. 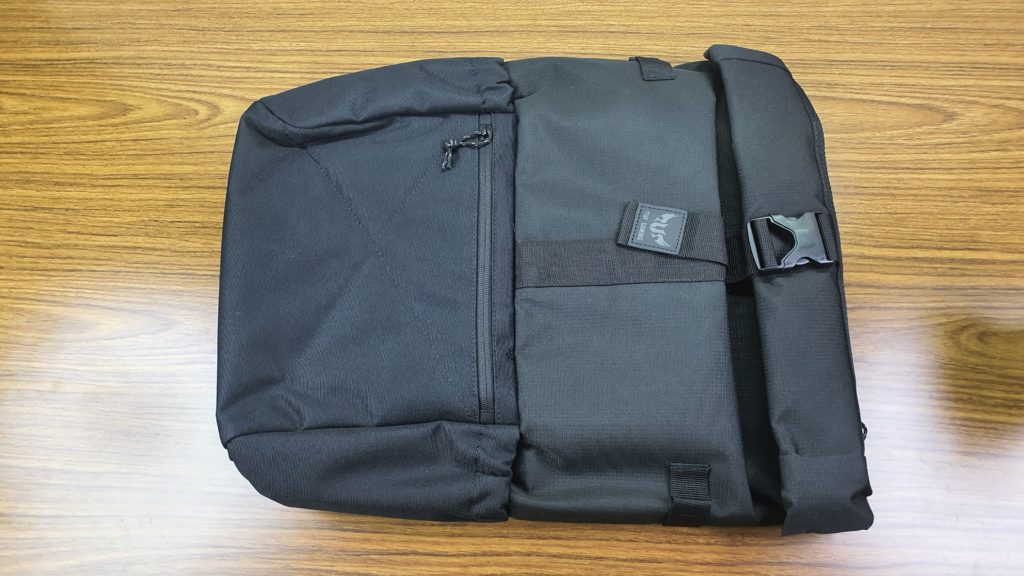 As an extra bonus, ASUS is also bundling in a free backpack with a roll-up top along with a sticker sheet to personalise your notebook.

In Malaysia, the ASUS TUF Gaming A15 comes in a plethora of variants alongside the larger sized A17. Our particular test unit was just a notch short of the highest end, most powerful variant that is otherwise similar save for the choice of processor with the higher end variant coming with an AMD Ryzen 9 4900H processor. Much lower down the line are entry-level variants that have an AMD Ryzen 5 4600H CPU with prices just above RM3,499 and up.

Here’s what our particular review unit, which is also designated as variant model FA506IV came with:

Coming as standard for all A15 local variants is a 15.6-inch LED backlit IPS matte LCD with a 144Hz refresh rate. One thing to note is that the screen itself isn’t colour calibrated which may give content creators pause but the high refresh rate means that it’s superb for gaming, which is what the A15’s original mission profile is about. 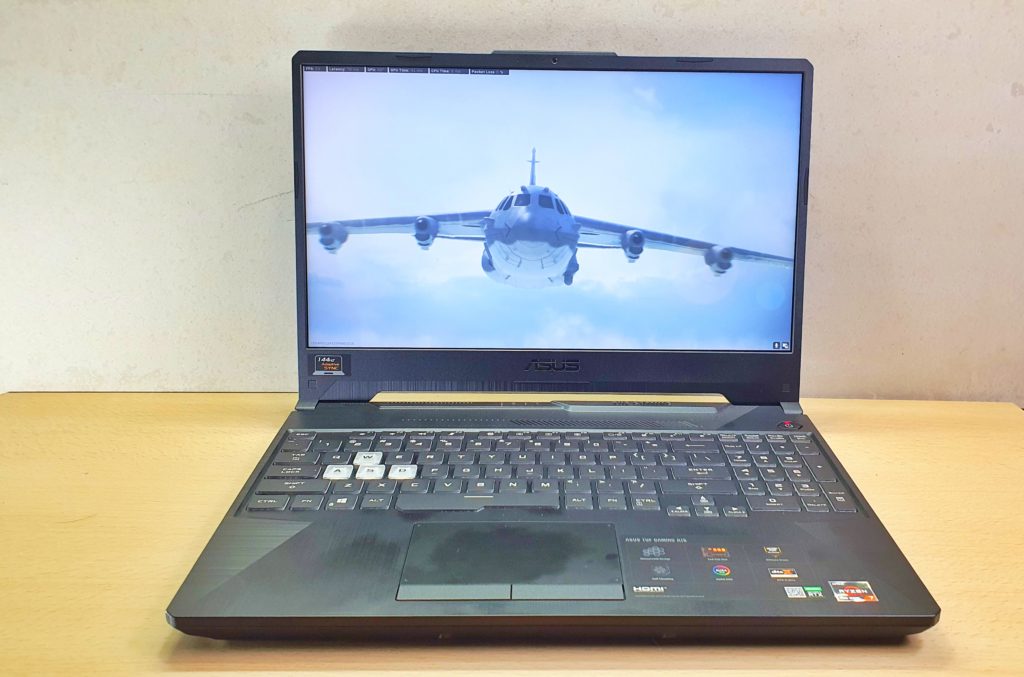 For memory, the TUF Gaming A15 comes with 16GB DDR4 3,200Hz RAM split across two 8GB sticks in two SO-DIMM sockets as standard. You have the option to swap them out for up to 32GB of RAM at your own discretion.

On that note, the TUF Gaming A15 has a very upgrade friendly chassis as you’re able to gain easy access to the aforementioned RAM, SSD and hard disk bays on the underside with the addition of a pop-up screw that makes it easier to open up the chassis without the risk of damaging it

Another thing to note is that the TUF Gaming A15 notebooks intended for the Malaysia market ditch the larger 90Whr battery seen in selected regions for a smaller 48Whr battery. 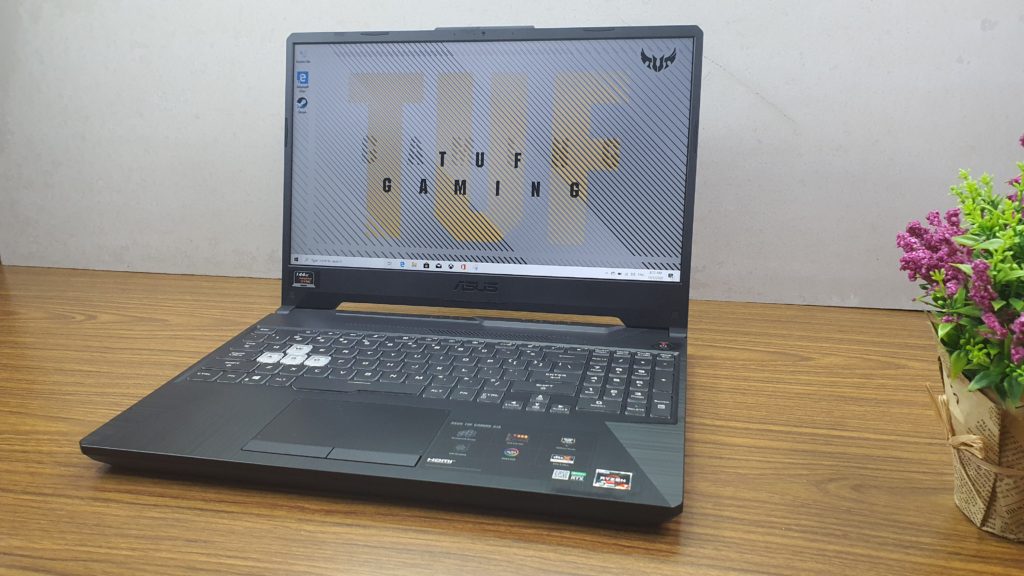 The tradeoff, is that you get more space to add an extra hard disk bay alongside the spare SSD bay. Local units come with either a 512GB or 1TB PCIe Gen3 solid state drive but our test unit came with a generous 1TB SSD which offers plenty of space for content.

The pairing of an AMD Ryzen 7-4800H processor paired with the NVIDIA RTX 2060 graphics card with 6GB GDDR6 VRAM in the TUF Gaming A15 is an interesting design choice that optimises performance and affordability as Intel’s processors come with a premium.

Announced earlier this year at CES 2020, the AMD Ryzen 7-4800H mobile processor is built on an 7nm FinFET manufacturing process with a total of 8 CPU cores and 16 threads, with a base clock speed of 2.9GHz that can be boosted up to a maximum of 4.2GHz.

On paper, they have a performance envelope that’s nearly as fast as their desktop siblings The bundled 16GB DDR4 3,200MHz RAM is more than sufficient for tackling most AAA games. When subjected to synthetic benchmarks, the TUF Gaming A15 acquitted itself in a very respectable manner with the following scores –

When we put the TUF Gaming A15 through its paces with some serious gaming it did not disappoint. We first put it through Deus Ex: Mankind Divided in the built-in benchmark and through an hour or two of gameplay and it managed to run smoothly with Ultra textures and 144Hz refresh rate. You can refer to the screencaps of our benchmarks here:

The insanely popular game Modern Warfare: Warzone was also put to the test and we managed to get a steady 63fps average with graphic settings set on High all around on Full HD resolution.

As the game lacks an internal benchmark, we’ve averaged FPS across several hours of gaming in Warzone. There was a bit of initial lag on account of the need to load all the textures in several games but this is pretty much expected for a game that has a ridiculous 90GB in storage size and is getting bigger by the month.

Frame rates tend to dip slightly down to 55fps if there’s more action onscreen like incoming airstrikes or in the initial parts of the game where there are still multiple surviving combatants but picks up in the middle and later stages where there are less survivors. 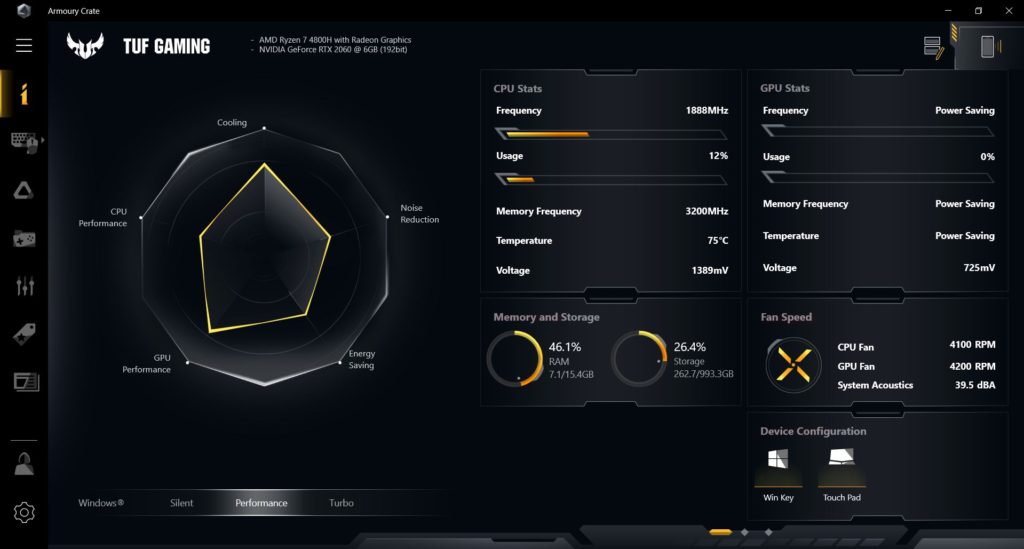 Even with intensive gaming over the course of several hours, the notebook’s cooling array managed to keep things at a fairly balmy 86°C while the fans ran at a decent 39.5 decibels on average and ramping up slightly to 45dB or so when gaming.. Fortunately, none of the critical parts like the keyboard or palm rests incurred any thermal dispersion issues with most of the heat vented to the underside and rear. 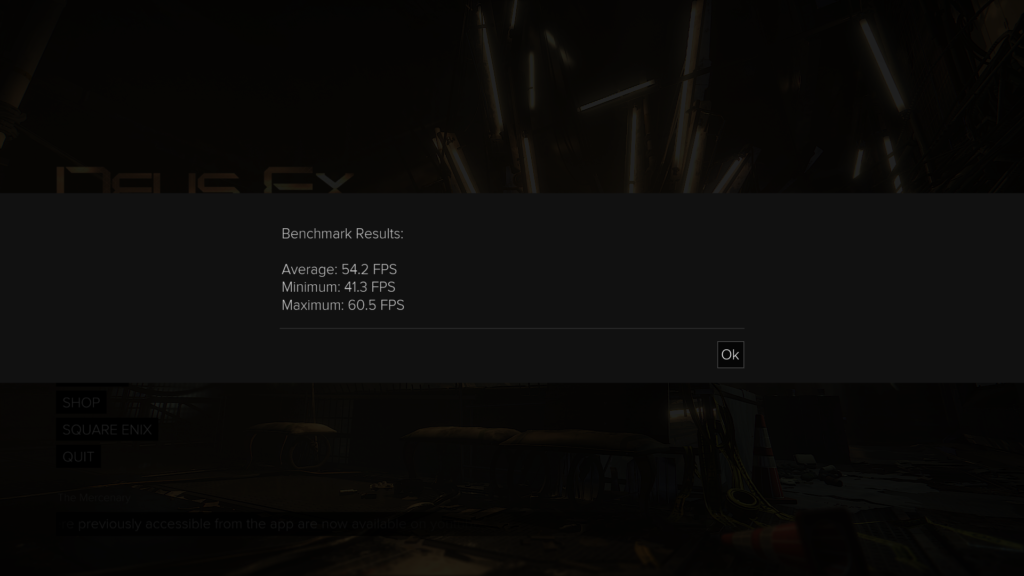 The 1080P 144Hz panel on the TUF Gaming A15 did not disappoint. While it’s not colour calibrated, it nonetheless was able to serve up pleasingly well saturated hues and pin-sharp detail onscreen for movies and gaming. 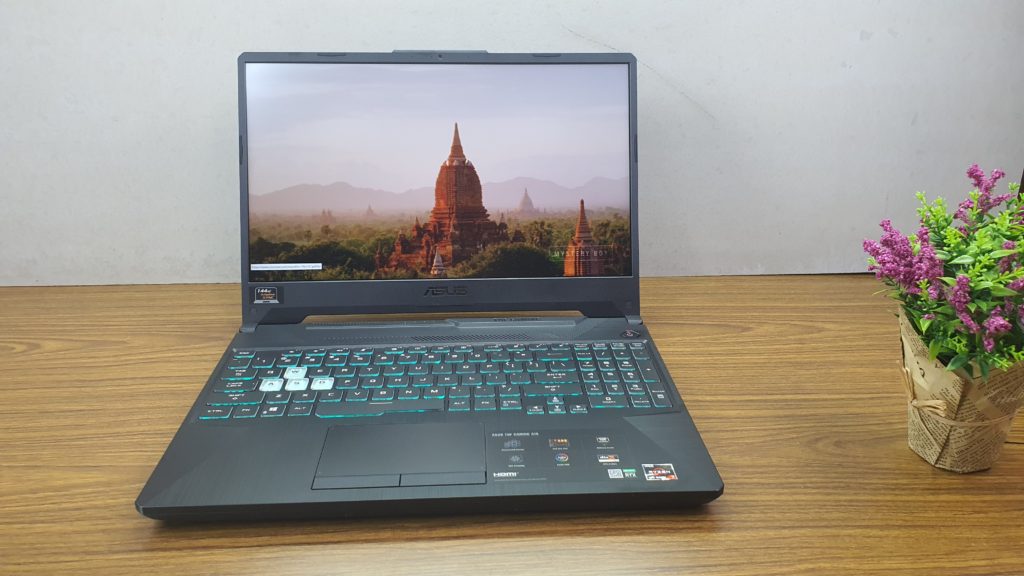 On the audio front, the paired stereo speakers on the A15 don’t boast of any exotic pedigree but do the job, with a relatively lively sound stage for Warzone so that you can tell where incoming rounds are zinging in from and sufficient clarity for Netflix and YouTube videos.

The bass is more than enough to register incoming grenades, RPG rounds and whatnot in games and managed to give Bear McCreary’s ‘Prelude to War’ a decent sounding off.Having a good keyboard can make or break a gaming notebook and it’s pleasing to see that ASUS has put in the effort to ensure that the A15’s keyboard is up to snuff. There’s a good amount of key travel here and enough of a crisp response that it does equally well for touch typing and for gaming too. We managed a respectable 110wpm in a typing test on the A15’s keyboard.

The ASUS TUF Gaming A15 has a 48Whr battery that can offer reasonably fair endurance in the field for non-gaming related tasks. With WiFi on and modest web browsing and editing on Google Docs as well as a few hours of YouTube on the side with screen brightness set to 50%, the notebook managed to last short of 8 hours of use. If you’re using it for gaming, that estimate goes down drastically and we managed to get about 3 hours and 30 minutes of gaming on Warzone away from the mains. 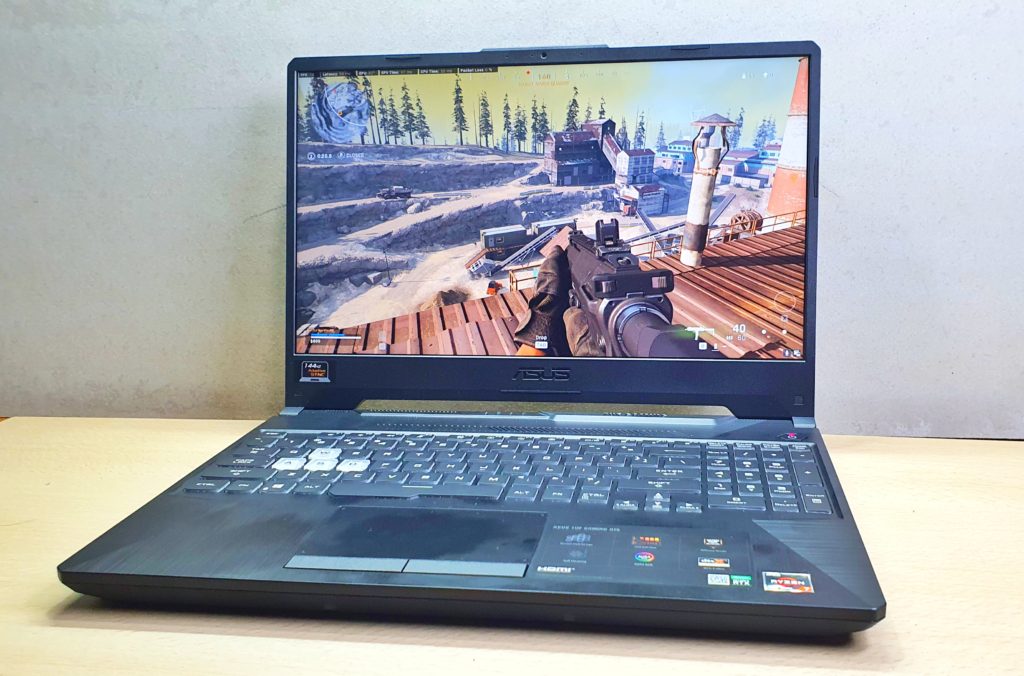 The respectable combination of a 144Hz display, a powerful Ryzen 7 4800H CPU, an NVIDIA GeForce RTX 2060 GPU and a combination of 16GB DDR4 RAM and a 1TB SSD allow it to tackle any game currently in the market with enough pixel crunching power to handle work-intensive applications like Adobe Photoshop and serious video editing work too.

If you’re not obsessed with getting the slimmest or shiniest gaming notebook in the market and want practical design and stellar performance, the ASUS TUF Gaming A15 is your best bet. If you need even more performance, you can opt for the top of the line variant of the A15 with an AMD Ryzen 9-4900H CPU and much of the same hardware which costs RM5,899.

What we liked Exceptional MIL-STD-810H rating, striking military design, good keyboard, easy to access chassis for upgrades, excellent cooling setup, vibrant 144Hz display
What we didn’t A bit chunky, display not sRGB or DCI-P3 rated, a bit plasticky
We say The ASUS TUF Gaming A15 represents a superbly tuned combination of performance and rugged good looks that lets you tackle the latest games and heavy duty content creation at a reasonable price point