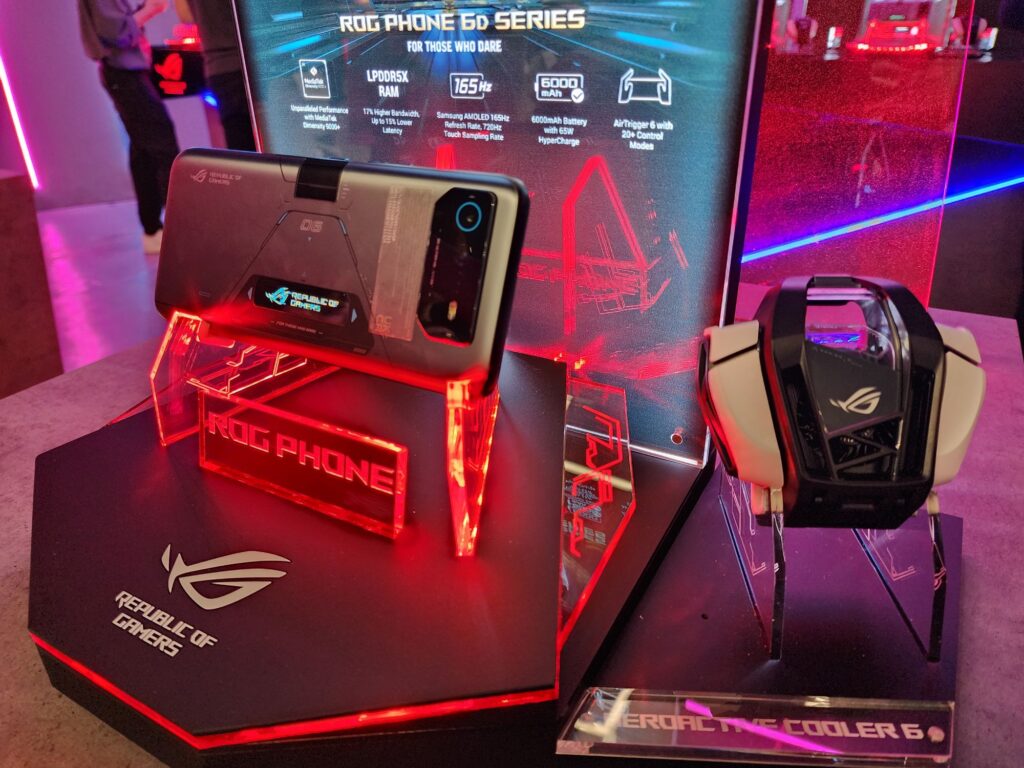 The ROG Phone 6 that landed in Malaysia a couple of months ago proved to be one of the most powerful gaming phones that money can buy but Asus is looking to top it, or rather, offer more alternatives to aspiring gamers as they’ve just rolled out the new ROG Phone 6D that uses the Dimensity 9000+ processor with even better performance along with a special new ROG Phone 6 Batman Edition.

The ROG Phone 6D will come in two variants that differ primarily in terms of how much RAM and storage they come in. The mainline ROG Phone 6D comes with a 6.78-inch 165Hz AMOLED display with a 720Hz touch-sampling rate and HDR10+ support, is powered by the MediaTek Dimensity 9000+ processor, has 12GB LPDDR5X RAM and has 256GB of storage. 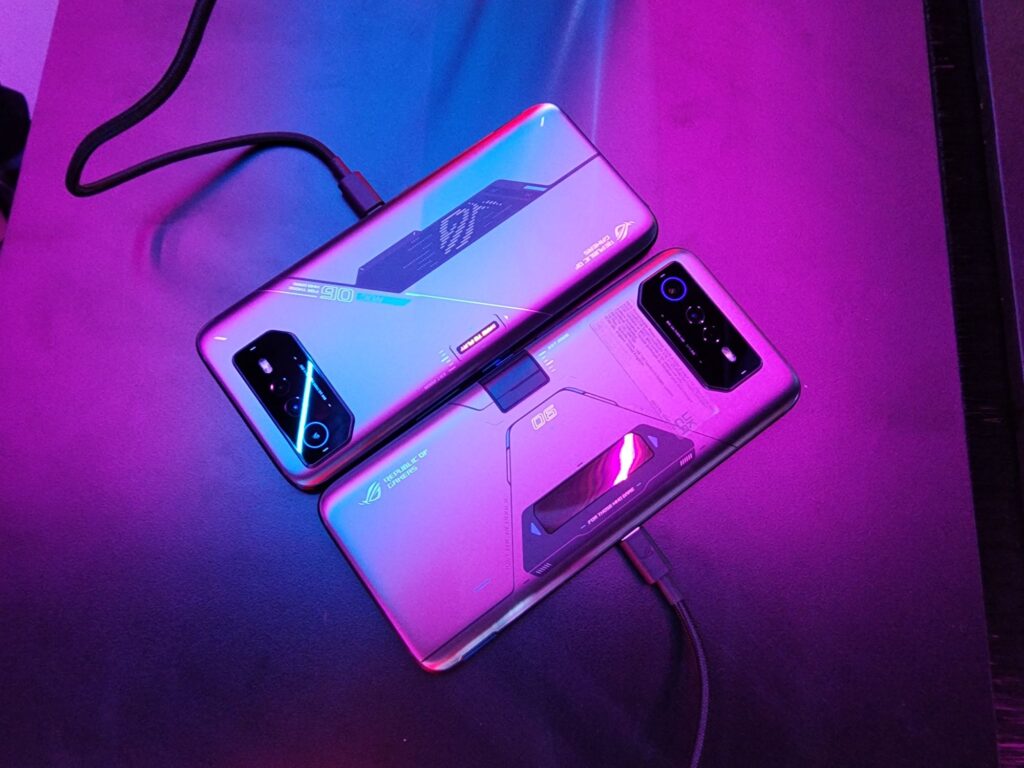 The rear features a 50MP primary camera, a 13MP ultra wide angle camera and a macro camera with the front packing 12MP selfie camera. Keeping the phone powered is a 6,000mAh battery with 65W fast charging support via a side and bottom mounted USB-C port. 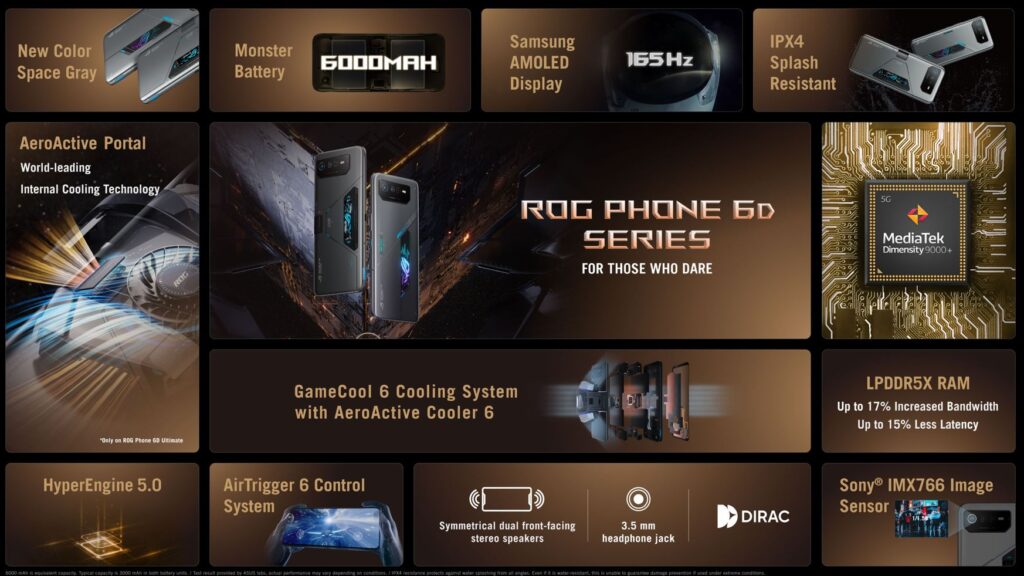 The higher end ROG Phone 6D Ultimate is aesthetically similar and has much of the same hardware but has 16GB LPDDR5X RAM, 512GB of storage as well as a slightly different backplate design that has an air intake that works in tandem with a free bundled AeroCooler 6 attachment to enhance thermal efficiency by 20% when in activated. 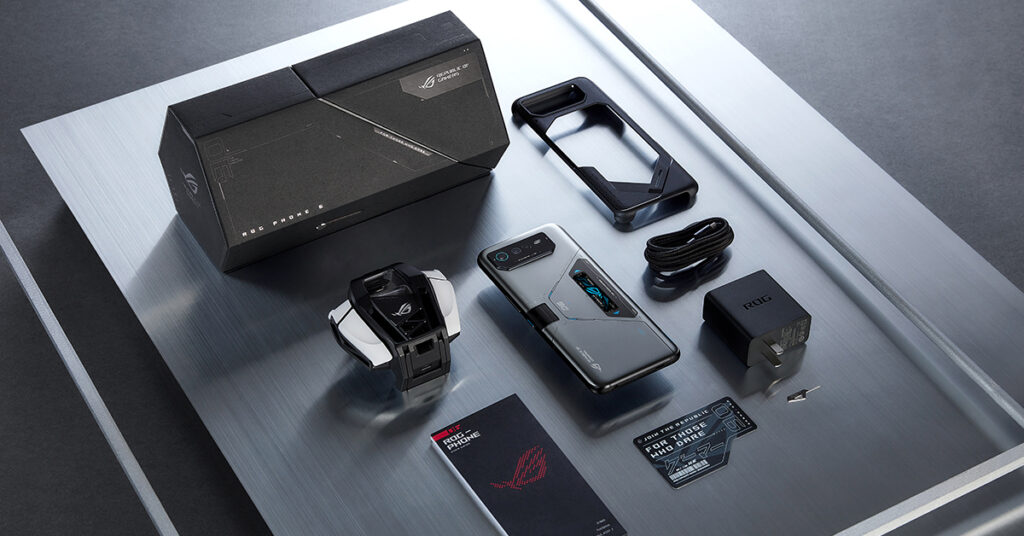 Contrary to prior reports, the ROG Phone 6 Batman Edition for the Malaysia market is a variant of the ROG Phone 6D using the Dimensity 9000+ processor with 12GB LPDDR5X RAM and 256GB storage rather than the prior mention of using a Snapdragon 8+ Gen 1 CPU though it does exist in other regions. 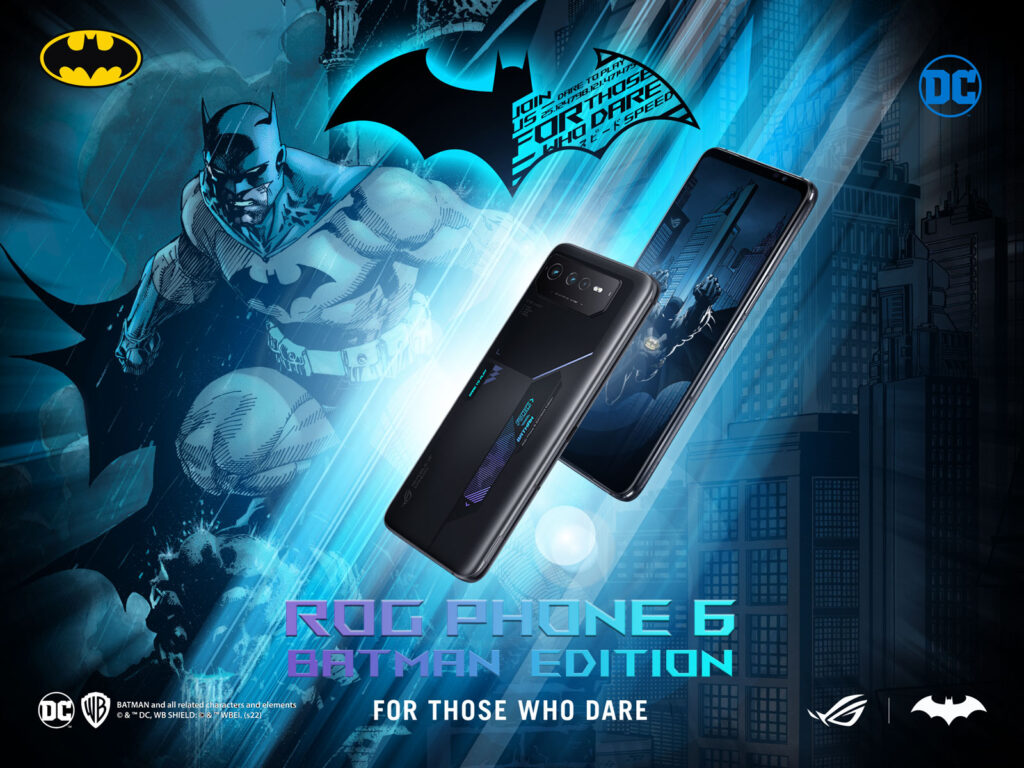 It features a special Batman case, special Batman iconography across the design, Batman themed wallpaper and unique animations when charging or unlocking the phone. The phone features a special package that has a small desktop sized Bat Signal projector powered by a USB-C cable, a Batman themed Aero Case to protect the phone, a SIM eject pin with the Batman logo plonked within a Gotham City pedestal. 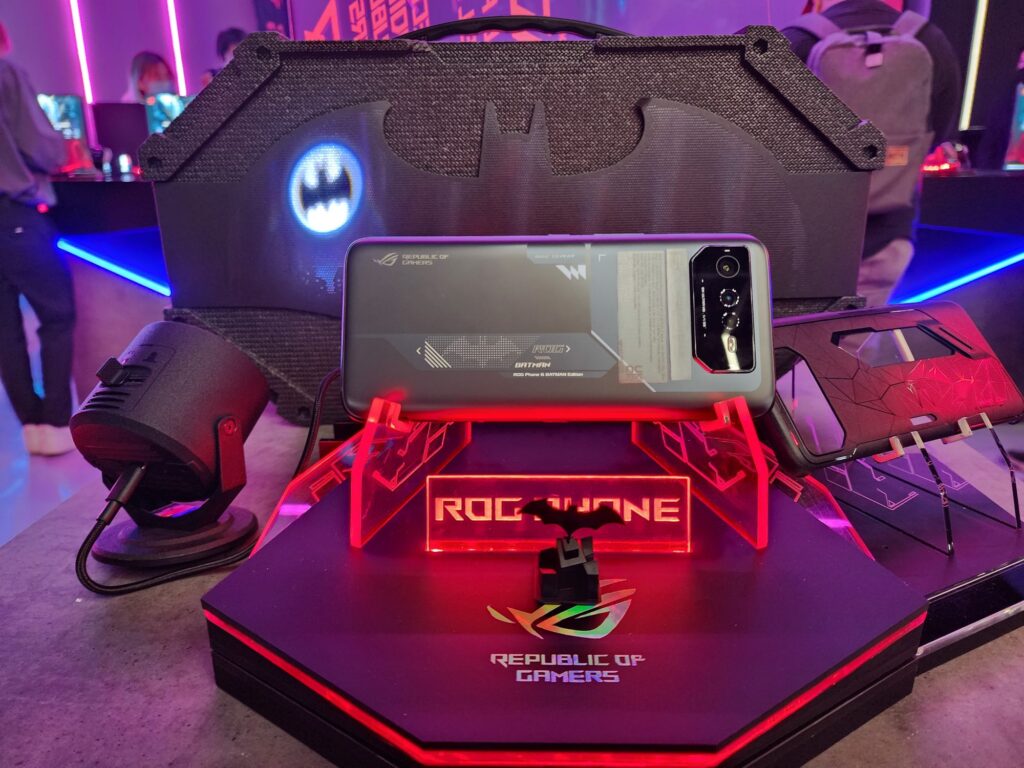 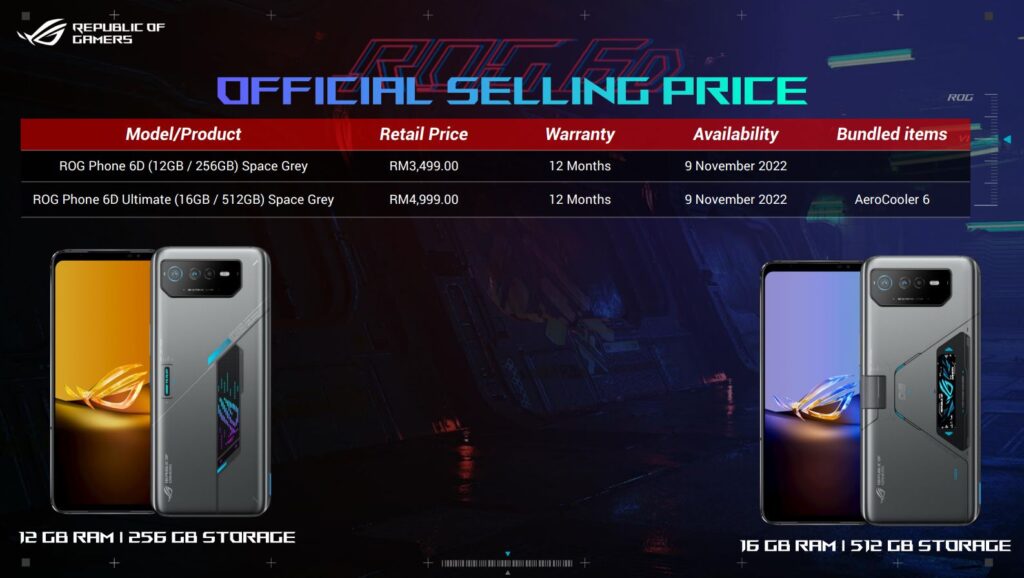 The ROG Phone 6 Batman Edition with 12GB RAM/256GB storage retails for RM4,799 and will be available from 25th November 2022 in Malaysia. 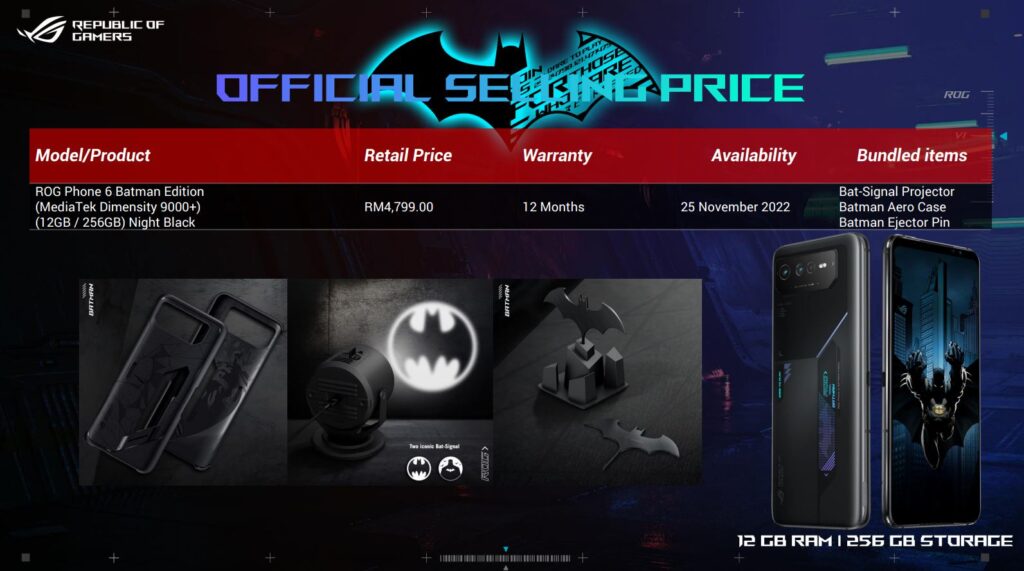 For a limited time only at selected dealers, buyers can trade in their old phones for an immediate RM300 rebate off the normal ROG Phone 6D 12GB RAM/256GB storage variant, allowing buyers to get the phone for just RM3,199. This is only valid till 30th November 2022. For more details on the ROG Phone 6D series, check out their official page here. 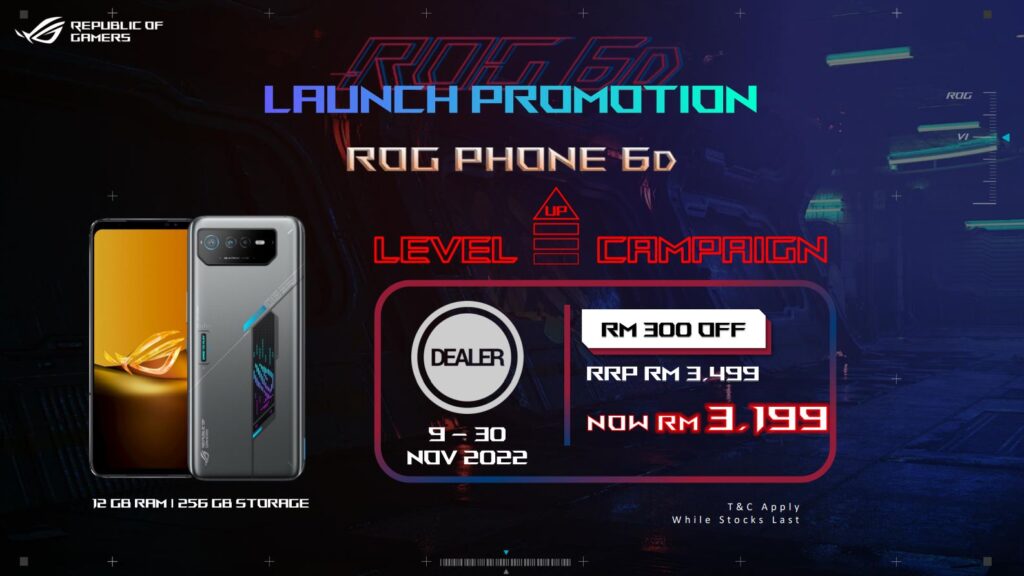