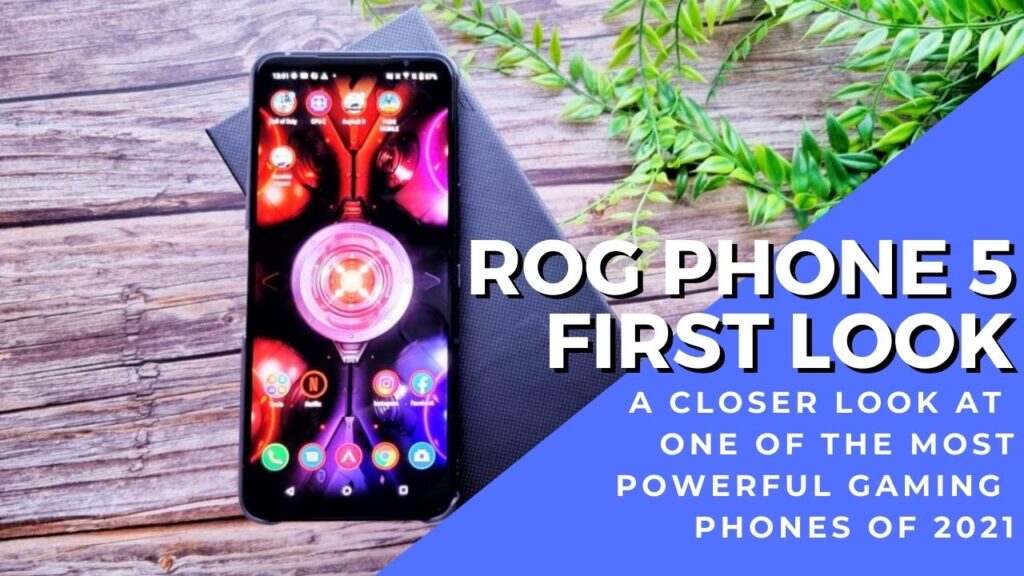 ASUS Republic of Gamers is certainly on to a good thing as their renowned ROG gaming phone is now in its fourth incarnation and available in Malaysia. Here’s our ROG Phone 5 first look where we share what’s in the box and what hardware it has under the hood and give it our first impressions. 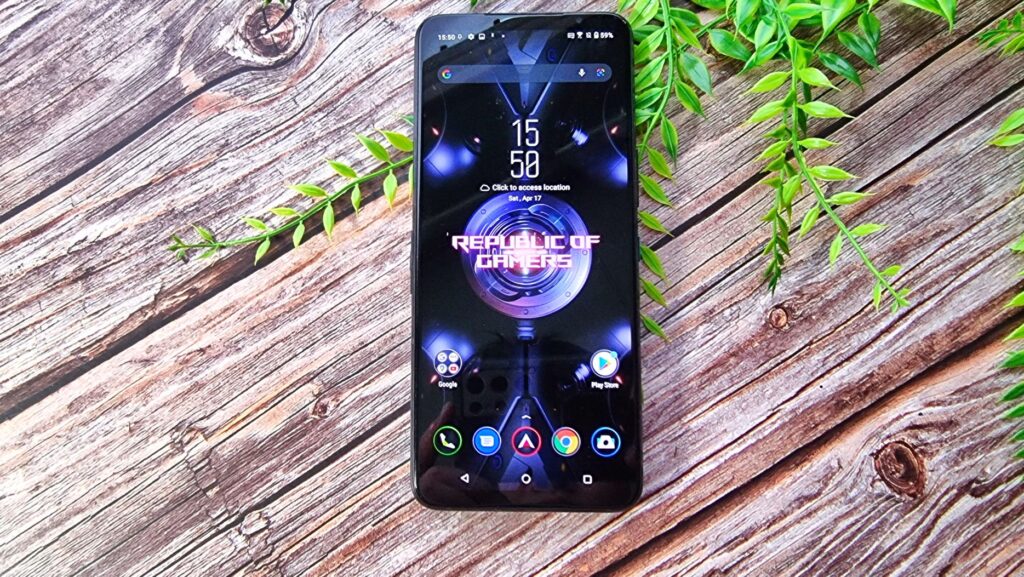 Republic of Gamers refreshingly retains the traditional approach to phone packaging which we appreciate as they throw in everything except the kitchen sink. In the case of our sample of ROG Phone 5, they’ve ditched the somewhat exotic hexagonal canister design from the ROG Phone 3 and instead gone for a standard squarish form factor with a flip-out top lid. There’s a cool reason behind it which we’ll get into shortly. 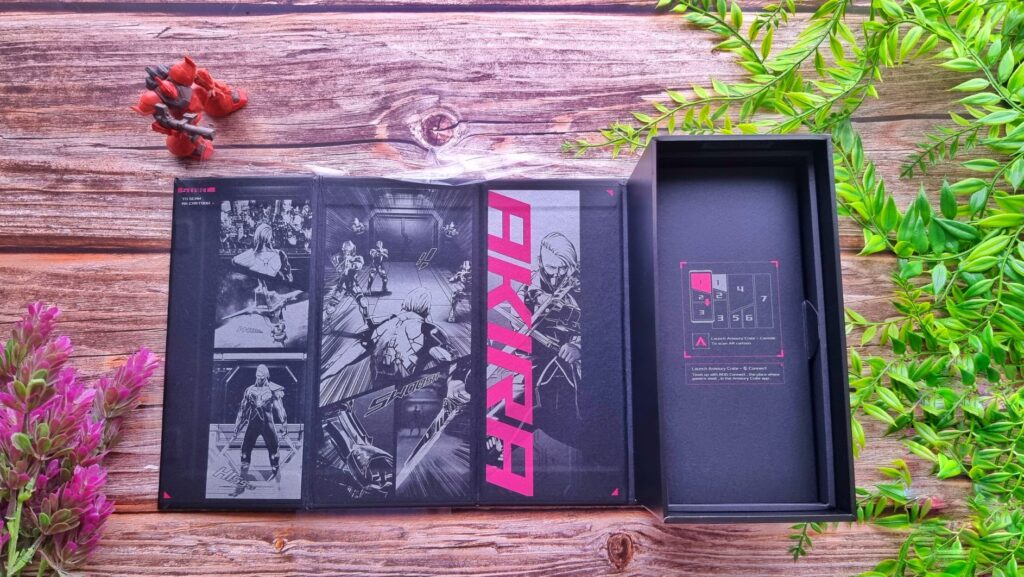 The ASUS ROG Phone 5 packaging makes for an imposing sight indeed as it has triple the height and width of the packaging protecting most other flagship phones for 2021. 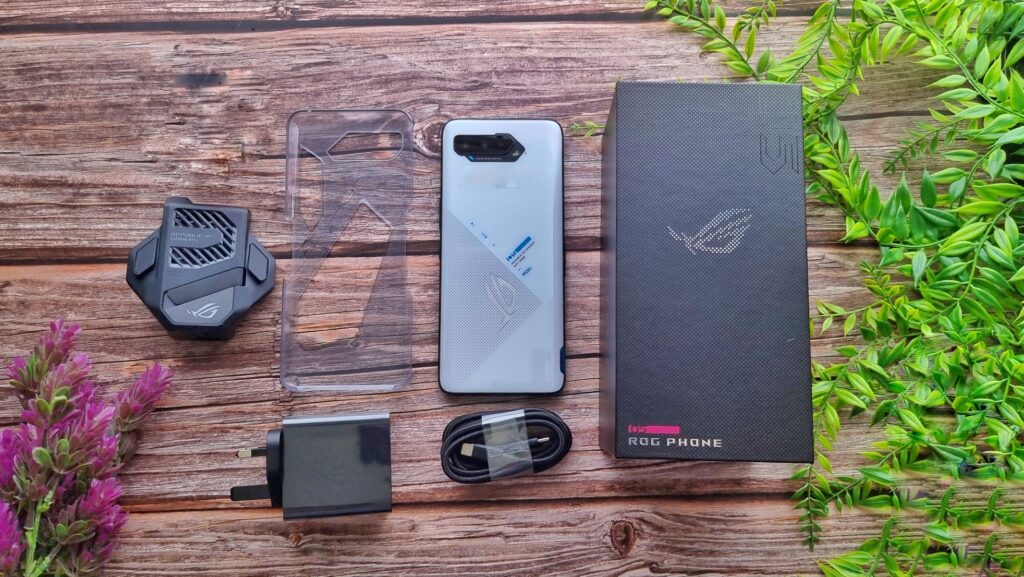 Once the shrink wrap has been removed, the packaging unfurls to reveal what seems to be an artfully illustrated series of comic panels though we’ve yet to determine who the illustrator is at this point in time.

Inside the box, you get the following:

One thing not included in the box but which will offer the best experience when using it is their ROG AeroActive Cooler 5 cooling attachment. This attachment is specific to the ROG Phone 5 and in essence is a huge cooling fan that snaps on the rear to help vent heat on top of adding in two additional control buttons within reach of your ring finger. 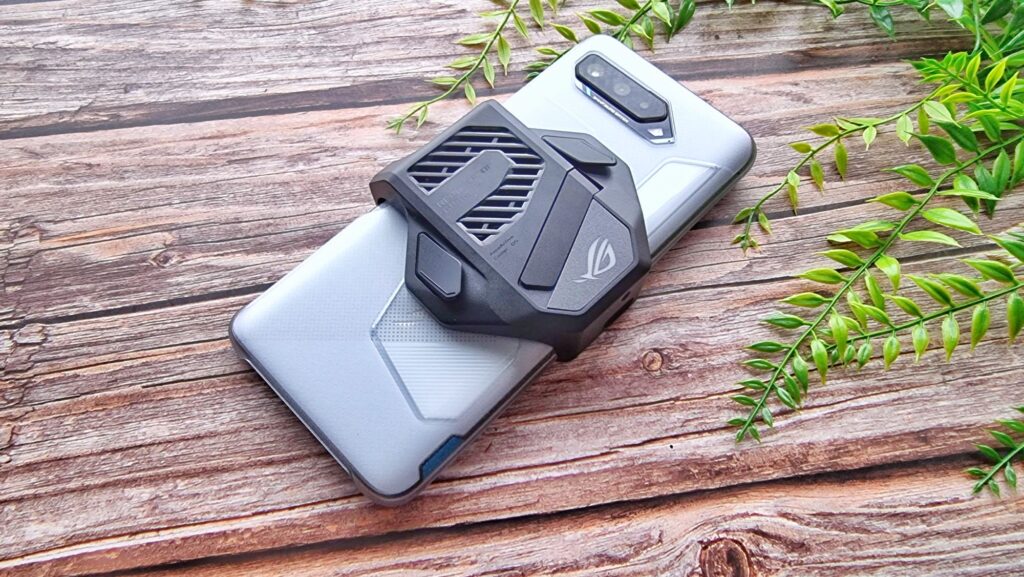 The AeroActive Cooler 5 snaps over the provided case so that the ROG Phone 5 stays protection.

Depending on which version of the ROG Phone 5 you get in Malaysia, you’ll either need to fork out extra to buy it. Our basic variant of the ROG Phone 5 doesn’t come with the AeroActive so you’ll need to pay an extra RM149 on top of the RM2,999 for the phone.

If you opt for the higher end and pricier ROG Phone 5 Pro and ROG Phone 5 Ultimate, the AeroActive cooling attachment gets bundled in on the house.

Of note here is that the bundled casing is compatible with the AeroActive Cooler 5 with precise cutouts that accommodate its wide girth. You can effectively apply the casing on ROG Phone 5 and then slap the AeroActive straight onto it without undue trouble, which speaks volumes to ROG’s attention to detail indeed. 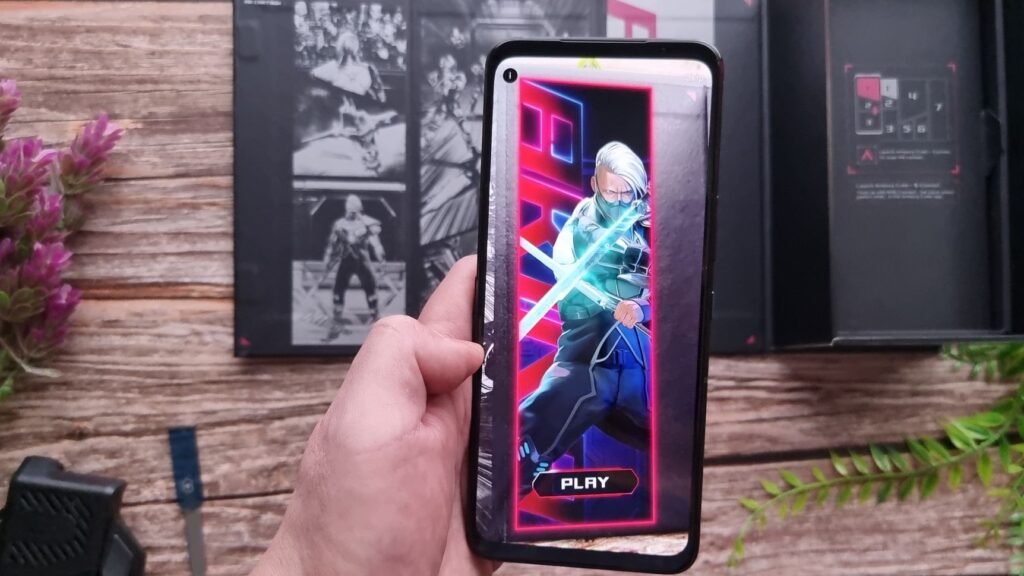 On setup, you can scan the ROG Phone 5’s camera onto the comic in the box packaging to reveal an AR-augmented comic.

Once you’ve gotten the phone up and running, you can view the comic on the packaging using the ROG Phone 5’s rear camera as AR-enhanced animated illustrations. This is, by far, the most novel unboxing experience I’ve seen yet.

Skipping the number 4 is a numerological aversion that’s somewhat common in many Asian cultures as it has connotations with death.

In terms of specifications, the ROG Phone 5 comes in three variants – the ROG Phone 5, ROG Phone 5 Pro and the ROG Phone 5 Ultimate, all of which have the same processor and display but differ in that they have increasingly more RAM and built-in storage as well as commensurately more freebies bundled with it. You can check the ROG Phone 5 bundles for Malaysia here.

The ROG Phone 5 and ROG Phone 5 Ultimate also notably have a rear OLED display for you to show pithy quotes, logos or whatnot. Our stock version of the ROG Phone 5 ditches this for cost reasons and has a more plain looking but still dope RGB backlit ROG logo on the back. 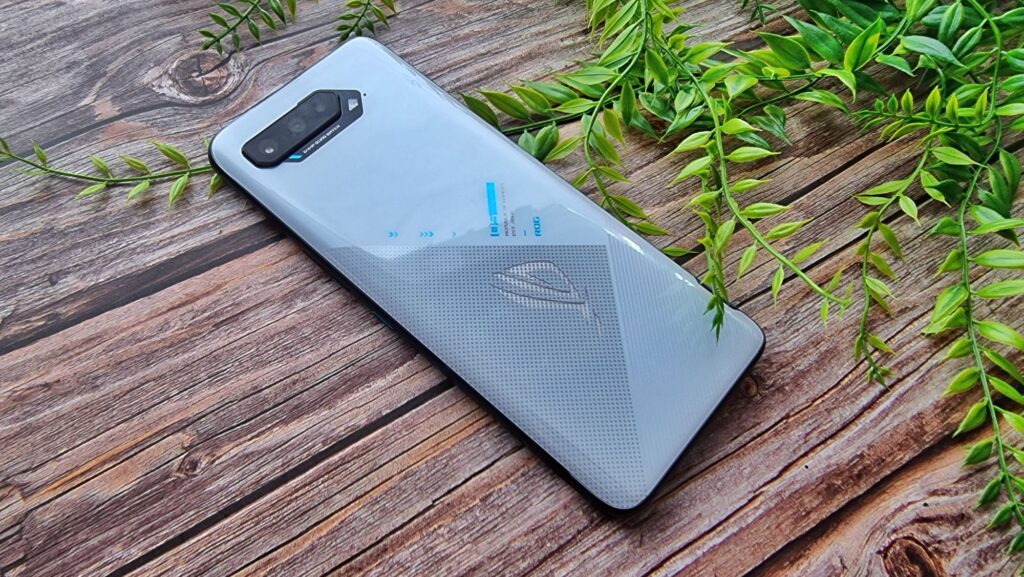 Our ROG Phone 5 review sample is the most basic variant with 8GB RAM and 128GB of non-expandable storage but it’s no pushover in terms of performance as it still has more than enough pixel crunching grunt to get the job done and the very same high-powered flagship Snapdragon 888 processor.

You can check the differences with the other ROG Phone 5 variants in more detail in our prior ROG Phone 5 Malaysia retail price feature here.

Our ROG Phone 5 review sample comes in a shade that they’ve dubbed as Storm White which consists of a metallic white finish with blue accents at strategic points. When viewed side by side with the older ROG Phone 3, the new ROG Phone 5 is larger and thicker while maintaining the same proven layout for ports and buttons optimised for usage in landscape mode. 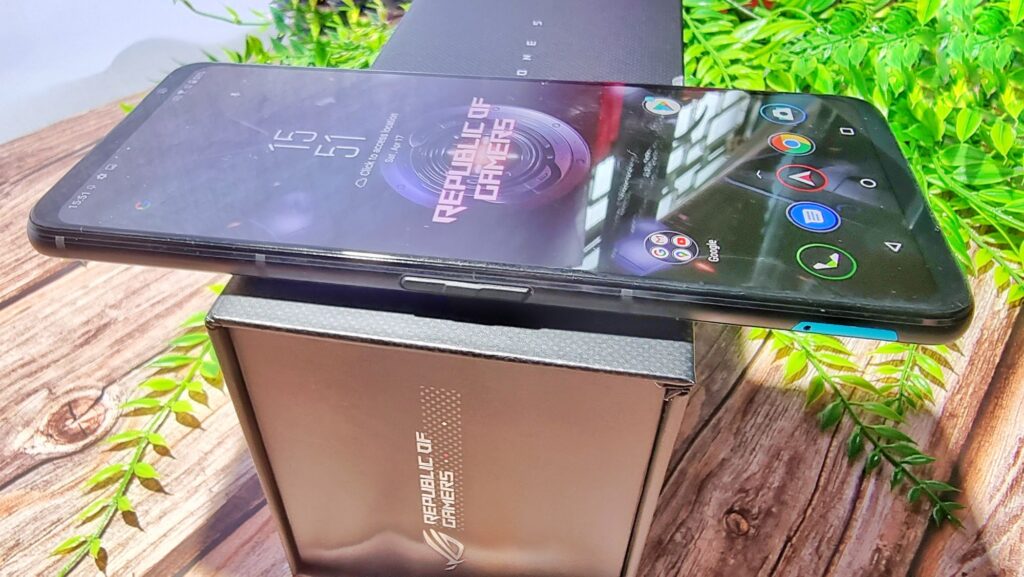 The top of the phone is bare but the left side, which corresponds to the base when you hold the phone landscape style, holds a unique double USB-C/pogo pin port specifically designed for the AeroActive cooler and the dual SIM card tray.

In lieu of the AeroActive, you can also plug a USB-C cable in directly into the phone to charge it which comes in handy if you’re gaming and which is exactly what the phone was designed to do.

The right side of the phone, which is the top if you hold it landscape-style has a power button and volume rocker. Both edges of the phone also hold ROG’s unique AirTriggers while are customisable ultrasonic buttons with haptic feedback. 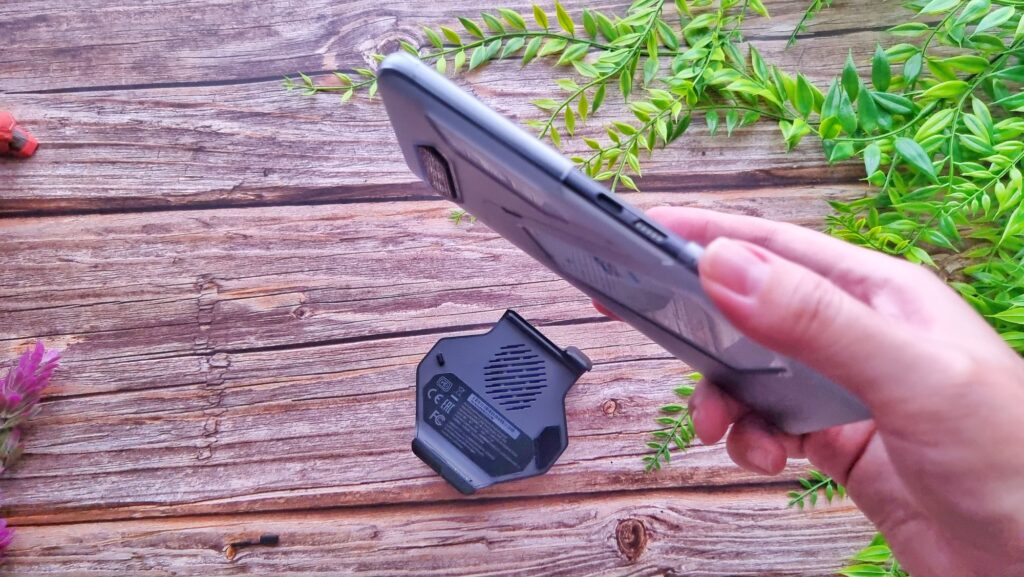 Long story short – they can be subdivided into two additional sub-triggers each depending where you press it, offers you additional controls that you can customise and use when gaming and feel exactly like real buttons when used which is a feat of engineering.

The left side of the phone hosts the primary USB-C charging port along with a pleasant bonus – a 3.5mm audio jack which was noticeably omitted from its predecessor the ROG Phone 3 along with a DSP. 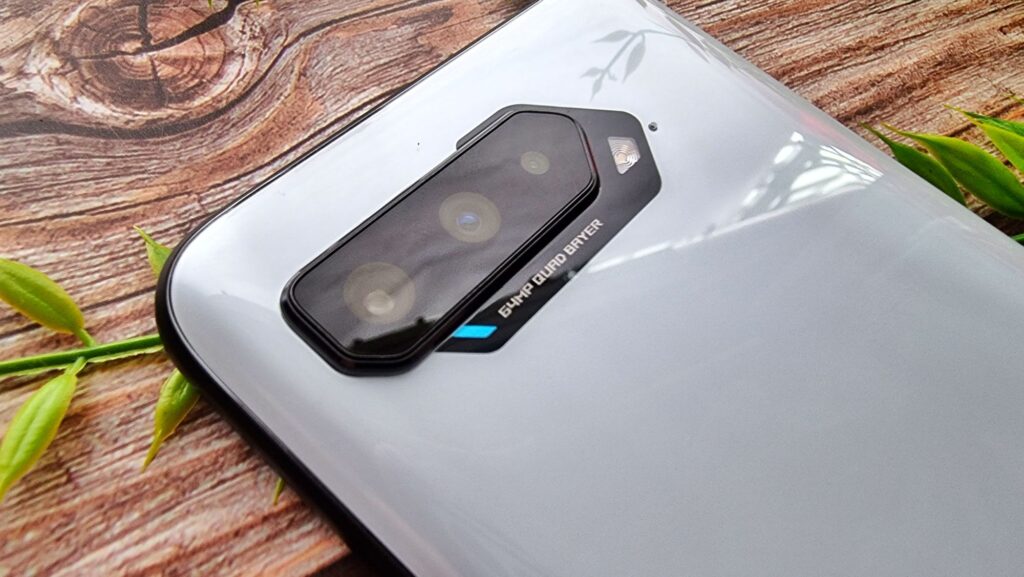 The backplate of the phone hosts a dual camera array done up in a distinctive angular housing which makes it somewhat easy to recognise the ROG Phone 5 from a distance. Just below it is an RGB backlit ROG logo with select bits of text done up in blue.

Interestingly enough, ROG has decided to omit any external cooling elements like heat vents seen in previous generations of the ROG Phone to shunt heat away from the processor. This time around, the backplate is just one smooth slab of glass. 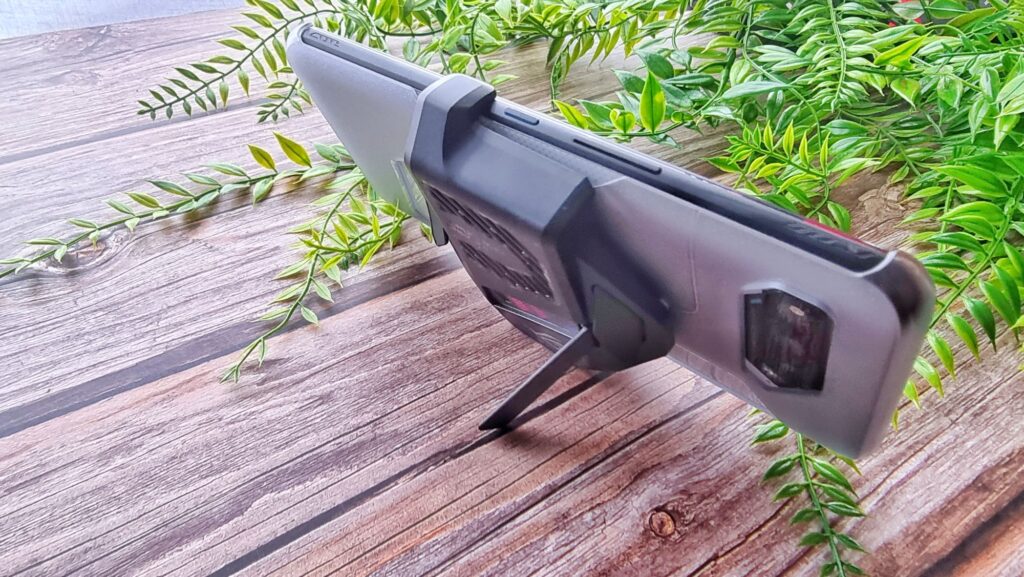 The optional AeroActive Cooler 5 attachment has a helpful kickstand to prop up the phone for Netflix watching duties.

Up front, the ROG Phone 5 is dominated by a huge 6.78-inch Full HD+ AMOLED display that boasts of a 144Hz refresh rate and which has 25% thinner bezels than the older ROG Phone 3. No expense was spared on the display and it has been optimised for gaming with a 300Hz touch sampling rate while offering exceptional colour reproduction with 11% DCI-P3 and a Delta E <1.

The display is also sheathed in the latest Gorilla Glass Victus to protect it from nicks and scratches. Flanking the display are a pair of stereo speakers.

The provided AeroActive Cooler 5 accessory sits smack dab in the middle of the rear backplate and has a host of novel features on top of its primary function to cool the phone during intensive gaming. 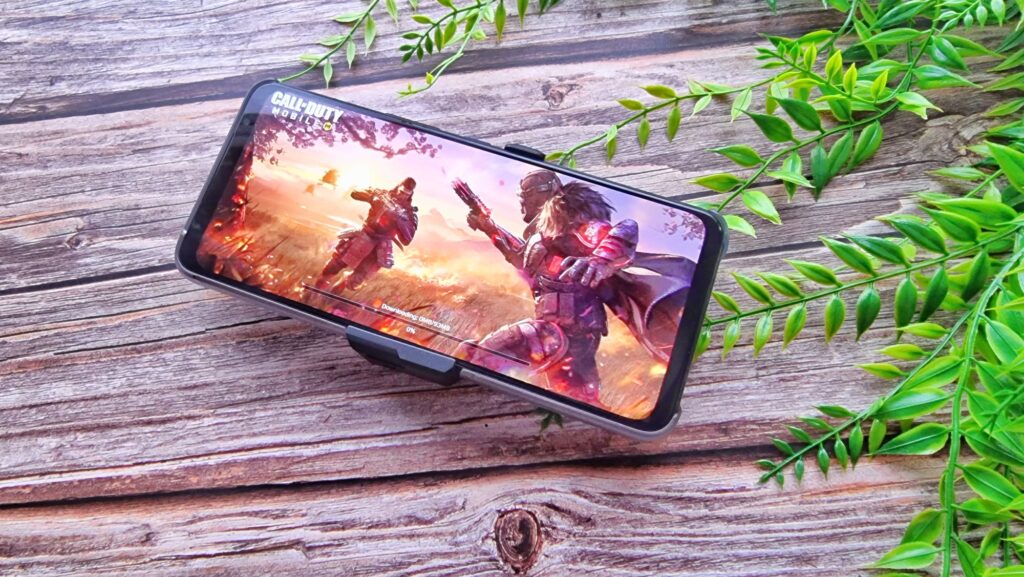 The ROG Phone 5 AMOLED display has a 144Hz refresh rate and HDR10+ support.

While the cooler obscures the backplate’s ROG logo when installed, it has its own backlit ROG logo too. It also features a kickstand for when you want to view content on the phone along with a pair of additional buttons that you can assign as you see fit. 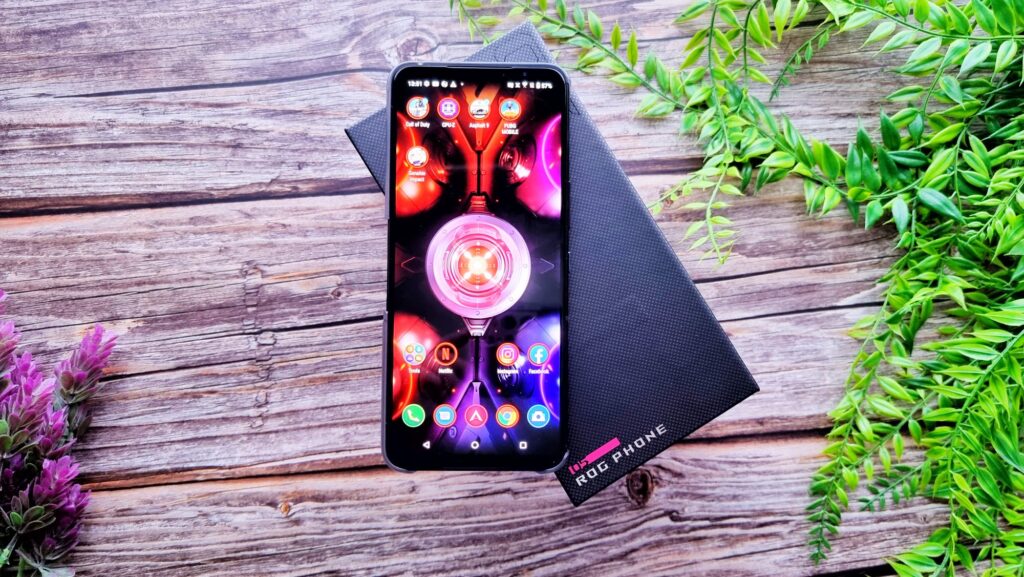 Overall build quality with the ROG Phone 5 is excellent, offering a reassuring heft and a very premium feel. The optional cooler may look somewhat plasticky but it’s a robustly built and highly useful, almost vital accessory for the ROG Phone 5.

For our ROG 5 first look, we took it for a quick whirl around in Call of Duty Mobile in team deathmatch and Battle Royale mode. It took a bit of a learning curve and some tweaking to make the most of the new Air Triggers. 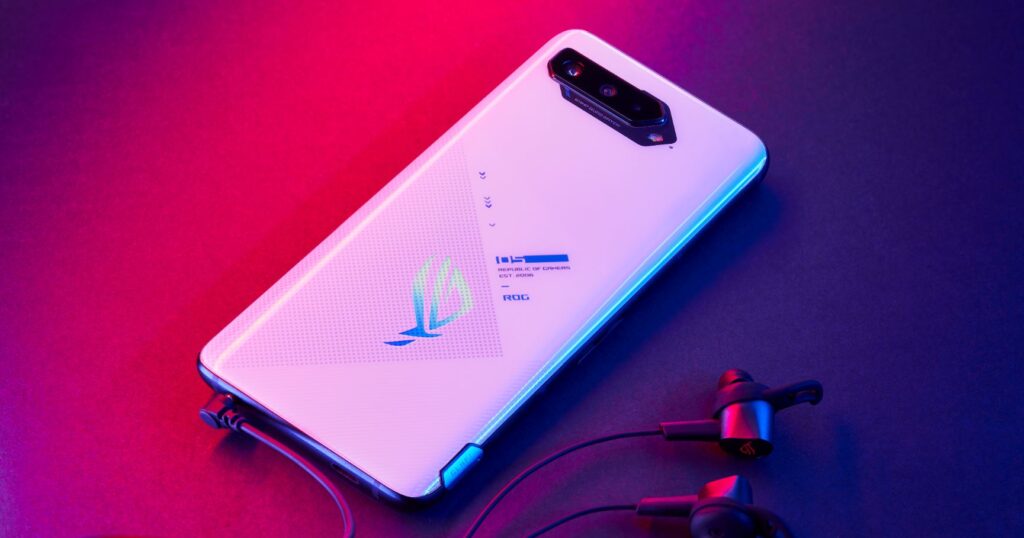 The heft of the ROG Phone 5, combined with the possible addition of six new physical buttons ( 4 on the Air Triggers and 2 more on Aerocooler) along with the addition of assigning a control when you shake the phone makes it feel and handle like a PS Vita or Switch. Stay tuned for our full review when we put it through its paces!