Asus is delving into the large-scale corporate market with their  line-up of ExpertBook notebooks that are intended specifically for businesses. The Asus ExpertBook P5440FA is one of their new additions to the line-up with suitably business-like looks, exceptional durability and hardware optimised for a corporate desk jockey. 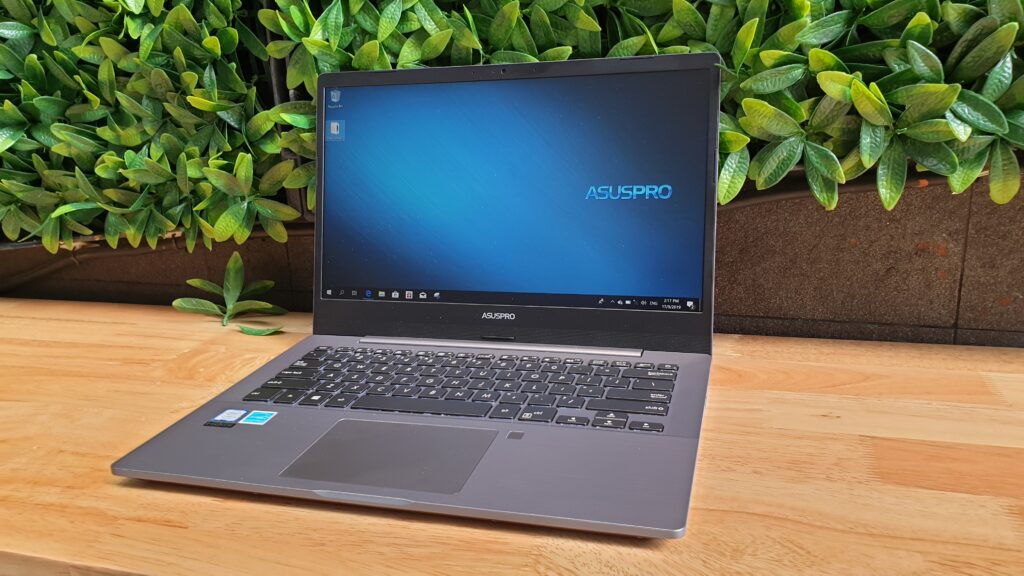 Unlike the rather gaudily hued VivoBooks that are intended for mass retail, the P5440FA lacks distinctive styling and is conservatively designed with a businesslike exterior that primarily consists of a staid looking chassis with a squarish, angular design all around that looks right at home in the boardroom or propped up on a table in some airport lounge in Madrid waiting for a flight to that next power meeting. 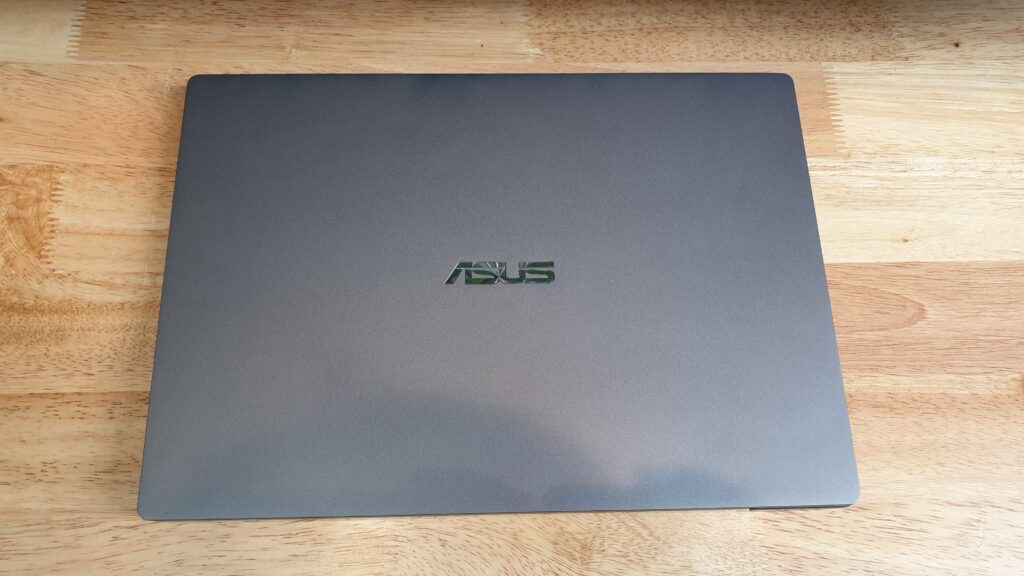 The top lid itself is done up a matte gunmetal gray that is bare save for the Asus logo and has a matte gunmetal gray brushed metal finish that is remarkably fingerprint resistant. Of note is that the notebook itself is built up to US MIL-STD 810G standards which means it’s a good deal tougher than your average notebook with the ability to survive a 100mm drop with the power on.

Seeing as its intended audience will likely be toting it around for extended periods of time, Asus has gone to the trouble of crafting almost the entirety of the chassis out of an extremely light magnesium alloy for extensive weight savings with the whole affair weighing a mere 1.2kg.  When held, the notebook felt wonderfully light and felt sturdy indeed. 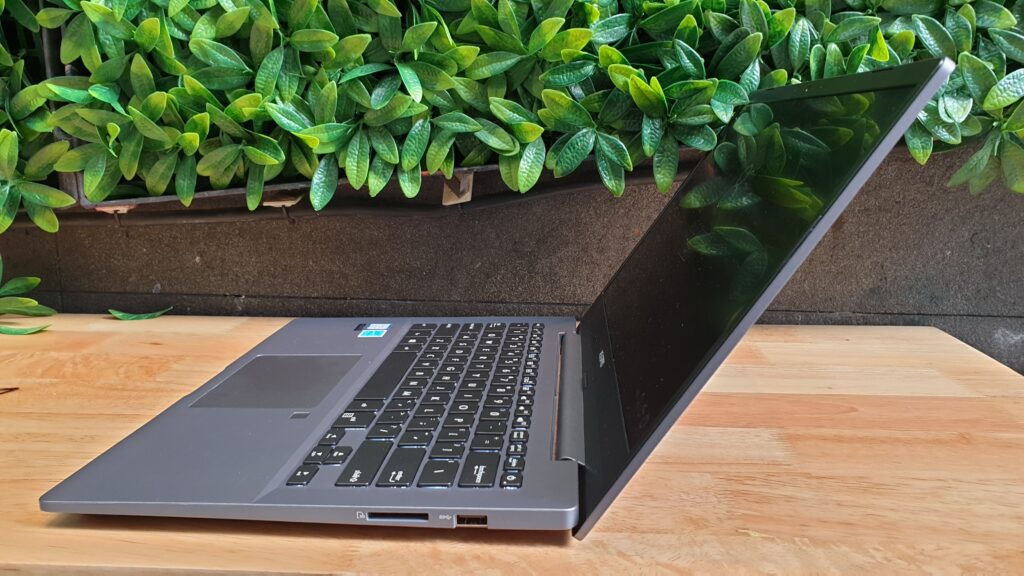 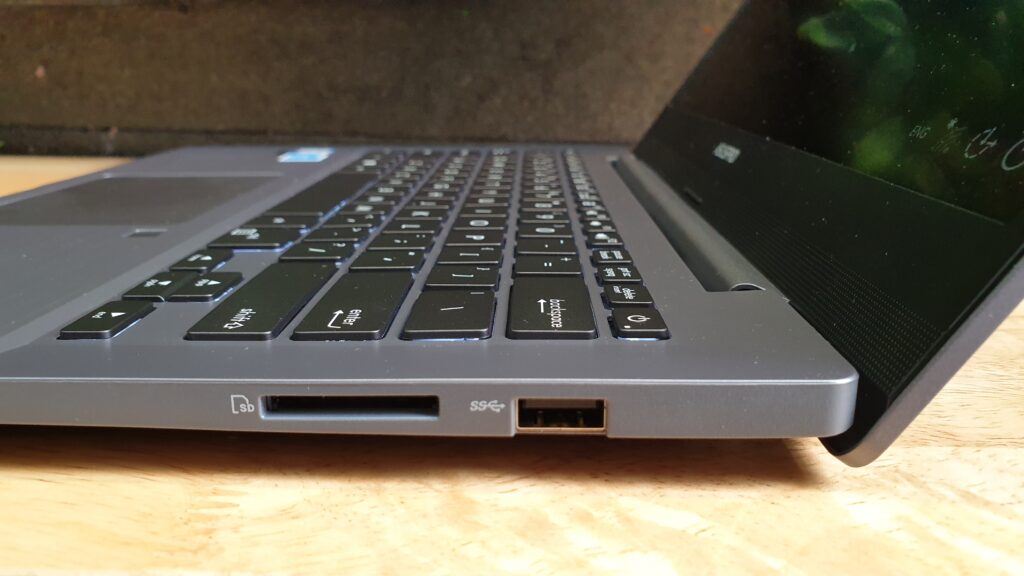 Just to ensure that you have all your ports sorted out, they’ve also bundled in two free dongles – a USB Type-C to VGA dongle and a USB Type-A to RJ-45 dongle too for good measure if you need wired Ethernet. 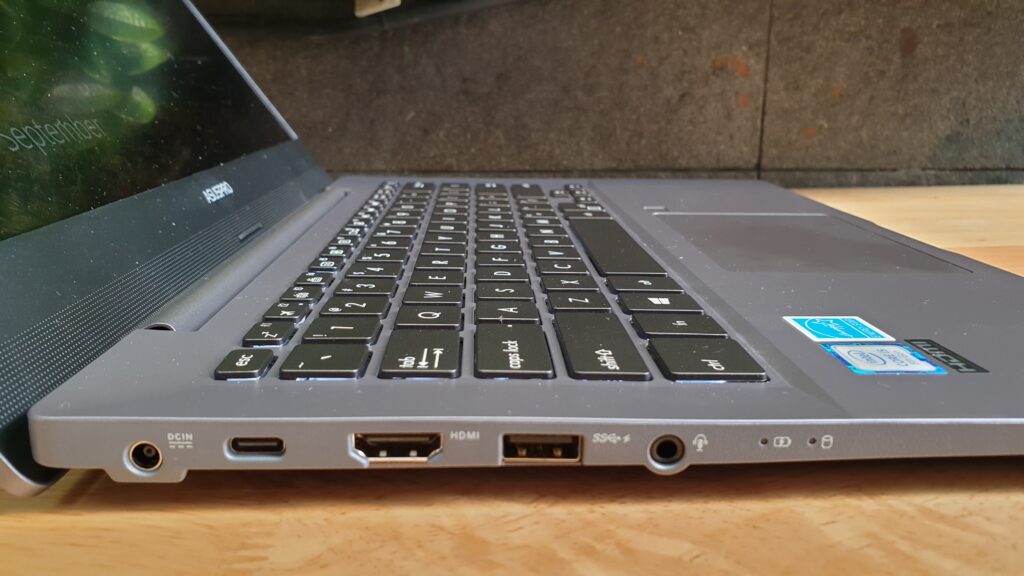 The front of the notebook is otherwise bare save for a tiny indentation to make it easier to open the laptop while the underside hosts a pair of side-firing stereo speakers and a quartet of rubber feet that raise the chassis just high enough when placed on a flat surface to allow for you to flip the display all the way around to an almost-flat 180-degree position.

Unlike the consumer oriented VivoBooks, the conservative aesthetics of the ExpertBook line eschew the ErgoLift hinge seen in the VivoBook and opts for a conventional hinge mechanism though this also allows it to flip around and down to a full 180-degrees in the unlikely scenario that you need to do so. While deployment is smooth and wobble free, the hinge was also rather stiff and requires two hands to deploy. The good part though is that the hinge itself is also built tough and is, on paper, rated for 50,000 movements which is quite a feat of engineering. 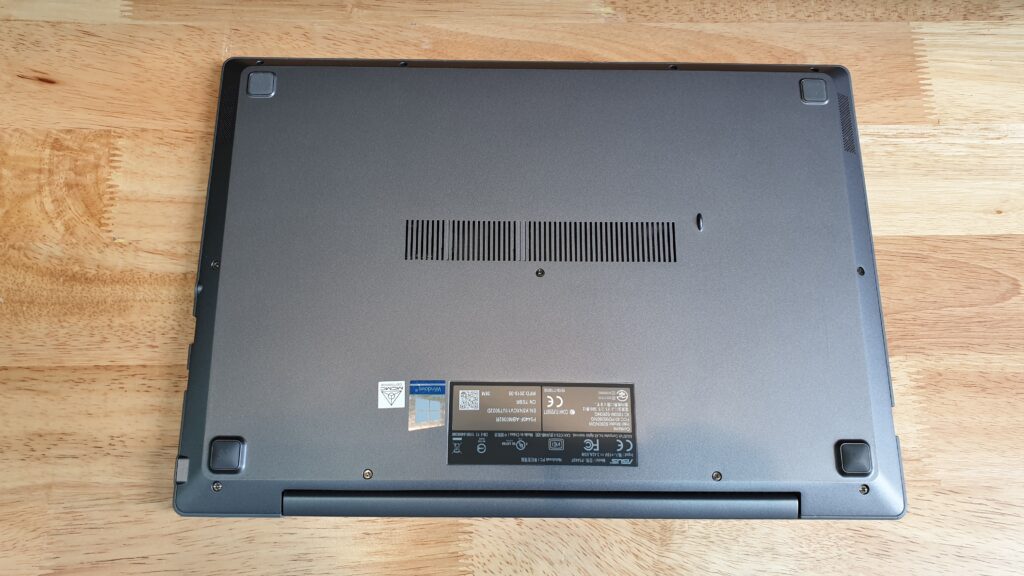 When flipped open, you get greeted by the sight of a compact white-backlit keyboard and a 14-inch Full HD display with a rather chunky bottom bezel. You also get a fingerprint reader inset next to the touchpad.

The ExpertBook  P5440FA isn’t going to win any notebook beauty competitions but you get it where it matters with an exceptionally light and sturdily built chassis along with a generous array of ports that can tackle most scenarios.

The ExpertBook  P5440FA comes in a variety of configurations depending on the needs of a prospective organisation though Malaysia has two primary configurations that can be purchased off the shelf that differ only in terms of what processor they use. 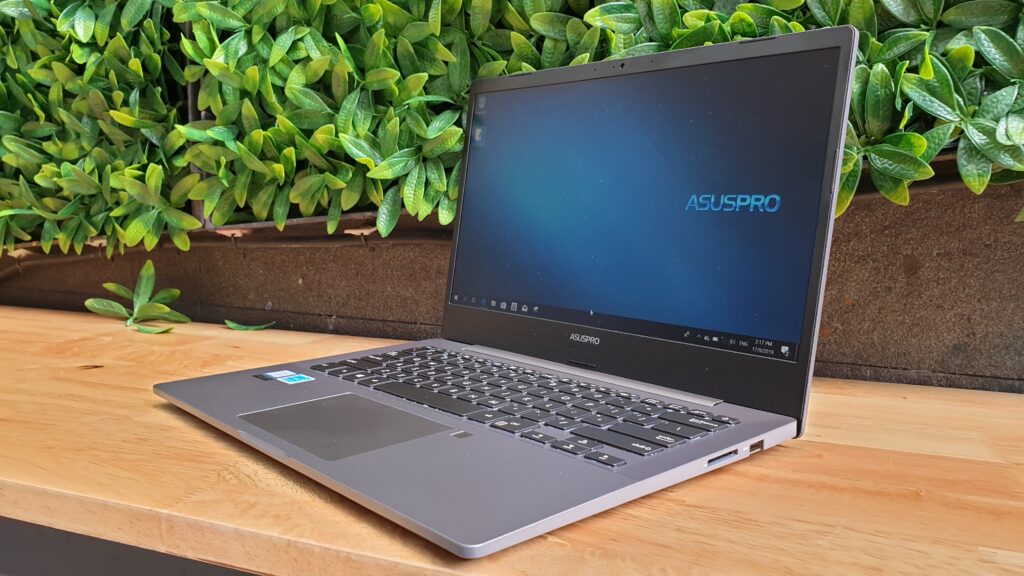 Our test unit bears an almost identical configuration save for the use of an 8th Intel Core i5-8265U processor along with a slightly cheaper price of RM3,999. Both configurations also have a spare slot, allowing you to add in additional RAM up to a maximum of 16GB.

With a configuration like this, our review unit of the P5440FA is ideal for general work with Microsoft Office – spreadsheets, emails, reports, Outlook and the like. The stock 8GB RAM and SSD gives it enough nippiness that it’s able to handle all but the most intensive Powerpoint decks while the plethora of available ports means that you won’t be caught high and dry in almost any presentation outside of the office. Unfortunately, the lack of a dedicated graphics card and its reliance on Intel UHD Graphics 620 means it’s ill suited for more graphics intensive tasks like rendering videos though it is able to handle photo editing in a pinch. 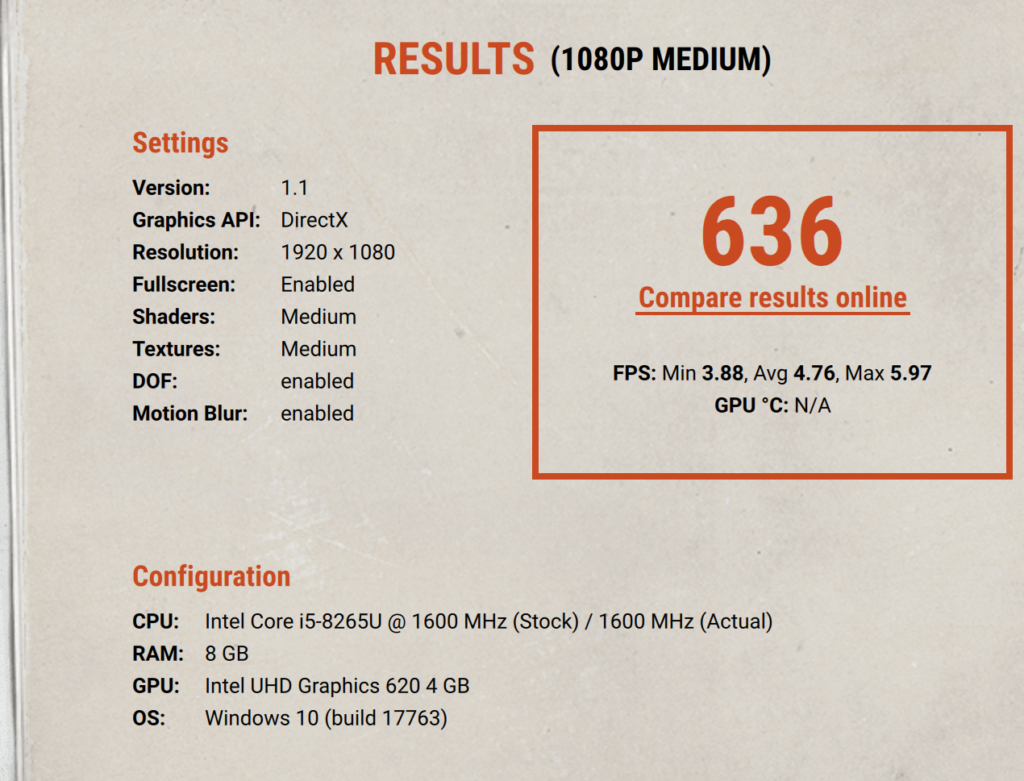 When subjected to synthetic benchmarks, the ExpertBook  P5440FA had a fair performance envelope for a business oriented notebook. In the Unigine Superposition benchmark, it got a score of 636 points at 1080P medium settings. In 3DMark’s TimeSpy test, it got a score of 365 points owing to the lack of a dedicated GPU while in the Night Raid benchmark, which tests notebooks with Intel HD graphics, it got a respectable score of 3,994 points. In the Cinebench R20 test, it got a modest score of 613 points. Unfortunately, PCMark was not able to run on the P5440FA during our testing period. The provision of the  nippy 512GB PCIE G3x2 SSD offered excellent read/write speeds in CrystalDiskMark with the notebook achieving 1,583MB/s read speeds and 1,033.4MB/s write speeds out of the starting gate. 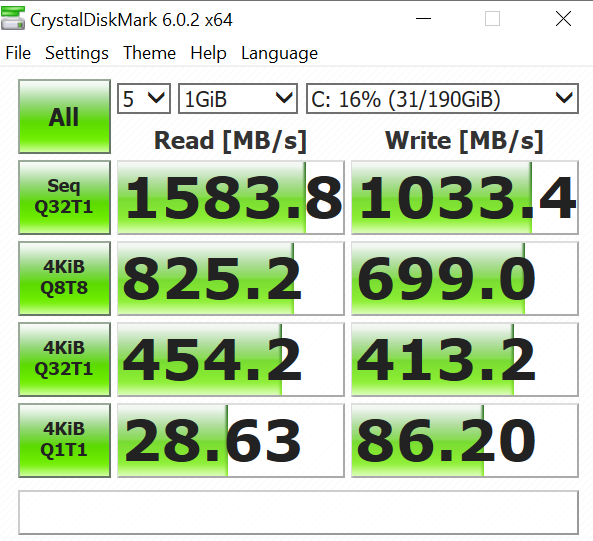 Under more practical field tests, the notebook was more than capable of handling the workload of a standard corporate desk jockey. It easily tackled over a dozen opened browser windows in Chrome and Edge, ploughed through a day’s worth of Excel and Powerpoint presentations as well as their open source derivatives without incident or significant slowdown and, in a pinch, managed a few retro games like the original Diablo and recent Roguelike game Crying Suns on the sly. 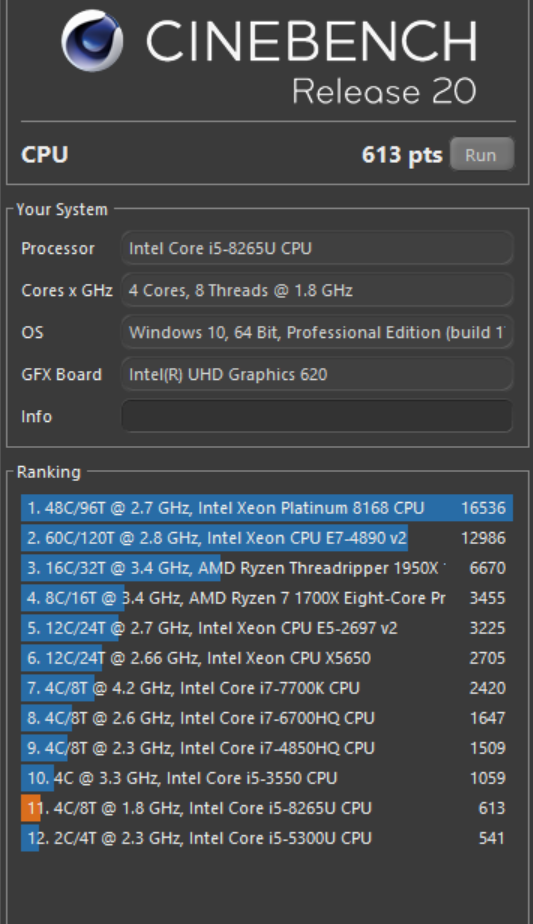 While the size of the bottom bezel was rather chunky, the ExpertBook P5440FA’s matte display was fortunately up to the task and offered good clarity and visibility even under brightly lit conditions. While the panel isn’t colour calibrated, it’s sufficiently vibrant enough to make a Netflix session a pleasant affair. This was also helped in part on account of the decent stereo speakers. While they’re not tuned by Harman Kardon, they’re sufficiently loud enough to fill up a small room with sound; a good thing if you’re using this for presentations.

Seeing as this is a productivity oriented laptop, it is mission-critical to ensure that the keyboard is up to task. Asus has tweaked the keyboard to offer 1.5mm key travel as well as slightly concave-shaped keys in order to ensure that it offers an excellent typing experience and for the most part, they’ve succeeded.

We managed to achieve a handy 100wpm in an online typing test and managed to hammer out this substantial review on its keyboard which is quite a testament to its capabilities indeed. The omission of a numeric keypad is understandable seeing the size of the notebook but it means spreadsheet crunchers will likely be slowed down a notch. 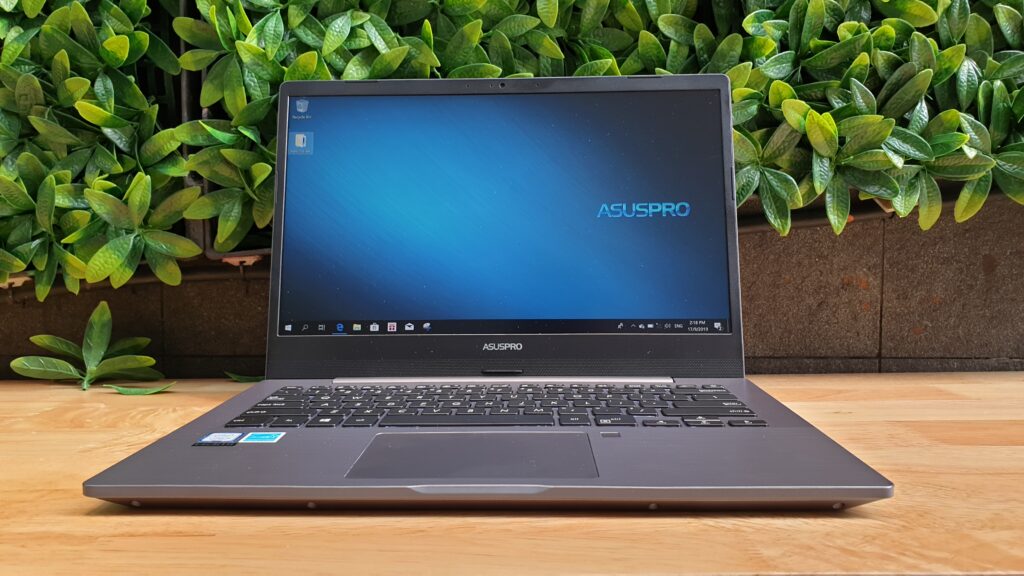 The Asus ExpertBook P5440FA has a quoted battery life of ten hours of paper but it’s, at best, an optimistic estimation. With the display set on moderate brightness and on average power settings with WiFi on and a purely productivity related work profile – emails, word processing, spreadsheets – for most of the day along with an hour or two of YouTube video, the notebook managed about seven hours of run time before we needed to find a plug point. That’s a fair figure by any measure and more than sufficient for a day out of the office.

As it stands, the Asus ExpertBook P5440FA comes at quite a significant premium and if you’re shopping purely on specifications alone, you might as well score the VivoBook S15 S531F that we reviewed recently that is not only cheaper but has a larger display, an equivalent processor and a dedicated NVIDIA GeForce MX250 GPU but at the trade-off of a heavier, less durable chassis and a more whimsical looking design.

That being said, the Asus ExpertBook P5440FA does have its charms. If you prioritise portability, durability and reliability, this notebook is well worth a look.

What we liked Light and portable, good build quality, excellent keyboard, great battery life
What we didn’t Not cheap
We say The AsusExpertbook P5440FA has sufficient power to handle mainstream computing tasks in the office while possessing sufficient portability and battery life to make it viable for all-day carry out in the field. Add in exceptional sturdiness and you have the makings of a great a business oriented notebook.