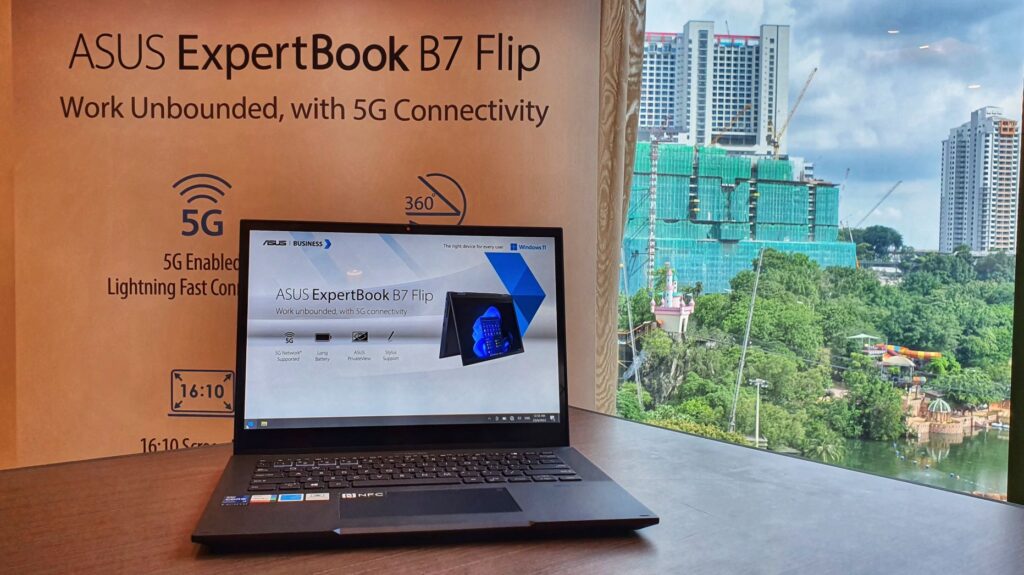 ASUS is looking to carve out a sizable swath of the enterprise notebook market and their latest ExpertBook B7 Flip aims to be the razor tip of the spear to persuade corporate suits and their procurement teams alike that it’s the right laptop for the job. We managed to get a closer look at their latest ExpertBook B7 Flip convertible minutes after the launch and here’s our first look of their most powerful enterprise convertible. 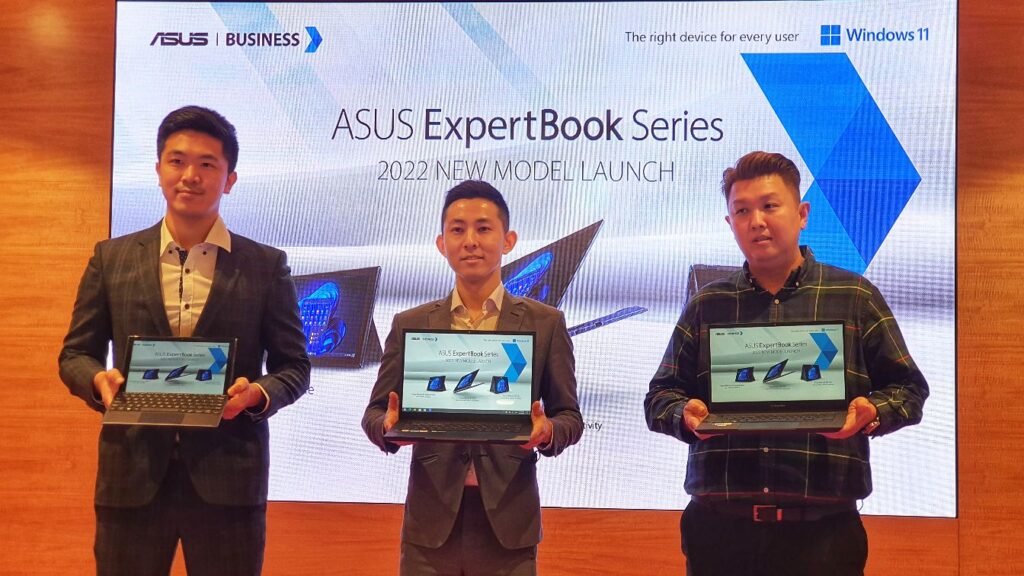 What is the ASUS ExpertBook B7 Flip

Part of their ExpertBook line-up of enterprise oriented notebooks which have added remote fleet management and biometrics security features added in on top of enhanced durability, the ASUS ExpertBook B7 Flip is a convertible laptop with a 360-degree hinge that allows users to swap the laptop display around and about to allow it to be used as a traditional laptop, as a display or as pure Windows tablet.

In keeping with their other higher end ExpertBook series laptops like the B9450 that we managed to field test last year, the ASUS ExpertBook B7 Flip is built out of an ultra light magnesium aluminium alloy for the entirety of the chassis, the keyboard frame and top lid that weighs just 1.47kg while affording an impressive MIL-STD-810H grade of durability which means it can survive modest drops and extremes of temperature.

When held, the ASUS ExpertBook B7 Flip felt exceptionally solid with minimal flex across the chassis save for a tiny bit of give in the top lid though it’s not a load bearing part of the frame so it’s not an issue. The double hinges are also exceptionally durable with a smooth opening mechanism that allows for easy one-handed opening helped in part by a slight indentation on the bottom of the keyboard tray. 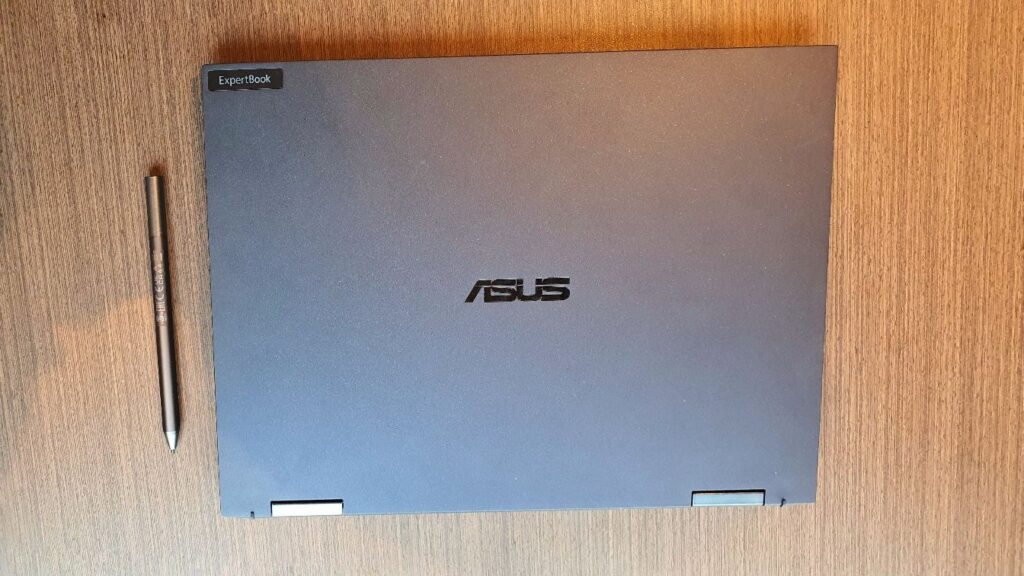 The ASUS ExpertBook B7 Flip comes in an understated matte dark gray paint job across the entirety of the chassis save for a modest chromed ASUS logo and an ExpertBook logo on the top lid. The edges of the laptop all terminate in straight lines with a slight bit of chamfering on the corners which adds to its business-oriented credentials.

The underside of the keyboard is a relatively plain slab of magnesium aluminium alloy held in place with a set of phillips screws with two grilles for the downward firing stereo speakers as well as for the ventilation. In keeping with its convertible design, the laptop ditches ASUS’s Ergolift and AAS Ultra hinge designs to allow for the keyboard to flip around and fold flush with the rear of the display in tablet mode. 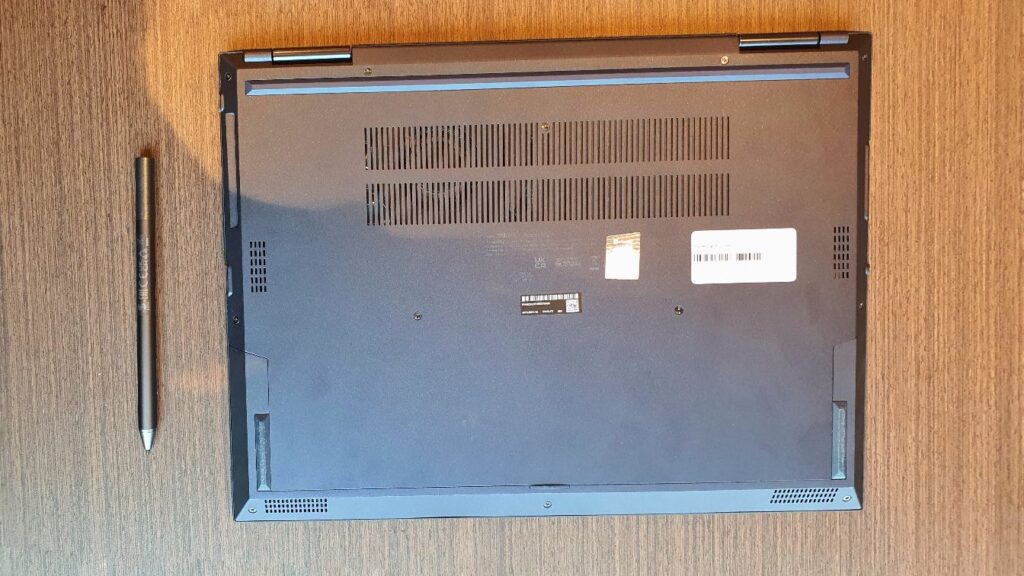 In terms of ports, the ASUS ExpertBook B7 Flip sports a relatively comprehensive array. The right side hosts a Kensington lock, a mini Display port for wired Ethernet via a dongle as well as a USB Type-A 3.2 Gen 2 port. Also on the right side is a power button that doubles as a fingerprint reader as well as a volume rocker.

On the left left, the laptop hosts a pair of USB-C Thunderbolt 4 ports capable of charging the laptop and outputting to a 4K display, a HDMI 2.0 port, a USB 3.2 Gen 2 Type-A port, a micro HDMI port and a 3.5mm audio combo jack. The ASUS ExpertBook B7 Flip also optionally comes issued with an MIP 2.0 ASUS Pen stylus that’s rated for 4,096 levels of touch sensitivity that’s charged via a built-in USB-C port. Oddly enough, there’s no stylus garage for the laptop though the stylus itself can latch on to the side though you’ll need some means of storing it securely when transported. 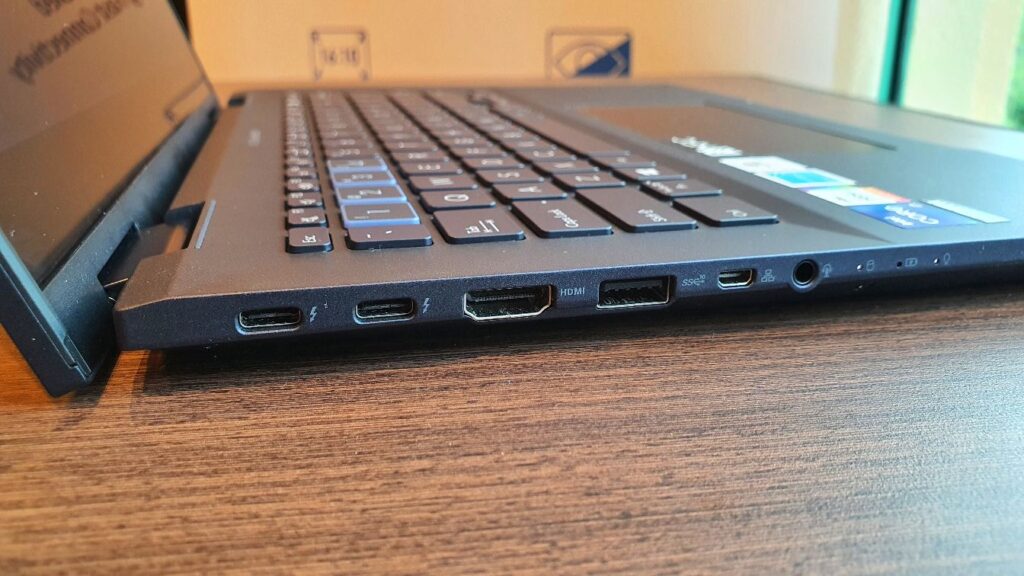 Combined, you’re theoretically able to output to three 4K external displays with one via the HDMI 2.0 port, one via the Thunderbolt 4 port and another via the mini DisplayPort.

In keeping with its intended audience, the ASUS ExpertBook B7 Flip looks and feels exceptionally corporate with a modest design that ensures that it won’t look out of place in a corporate boardroom.

In keeping with its mission profile as a corporate issued laptop for deployment to upper echelon personnel, the ASUS ExpertBook B7 Flip can be acquired in multiple configurations depending on how deep a company’s IT procurement budget goes.

For the ASUS ExpertBook B7 Flip test sample that we have on hand, it was kitted out with a 14-inch FHD+ touch display that, on paper, has a maximum 60Hz refresh rate and a peak 500 nits brightness and 72% NTSC. This admittedly means that it’s less than ideal for content creators as the screen isn’t colour calibrated and the modest 60Hz refresh rate precludes its usage for gaming but that isn’t its mission profile in any case. But unlike most consumer laptops, it touts a privacy filter dubbed ASUS Private View that prevents your screen’s contents from being seen by people beside you. 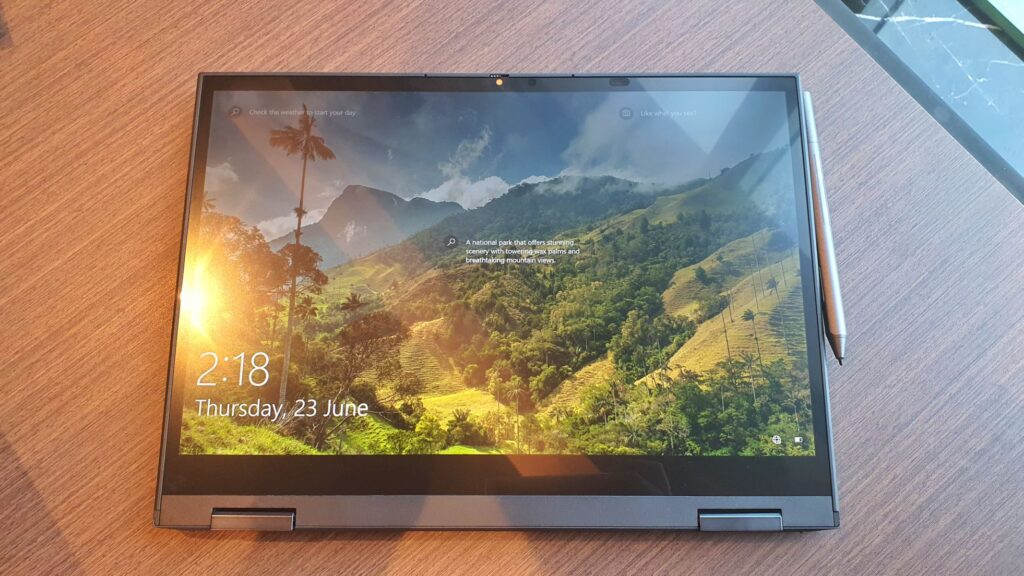 When run through a spot of web browsing and YouTube videos indoors and next to a window under direct sunlight, the display offered decent clarity though it isn’t exactly the brightest seen on test. It is however sufficient for its intended mission role for general computing work. 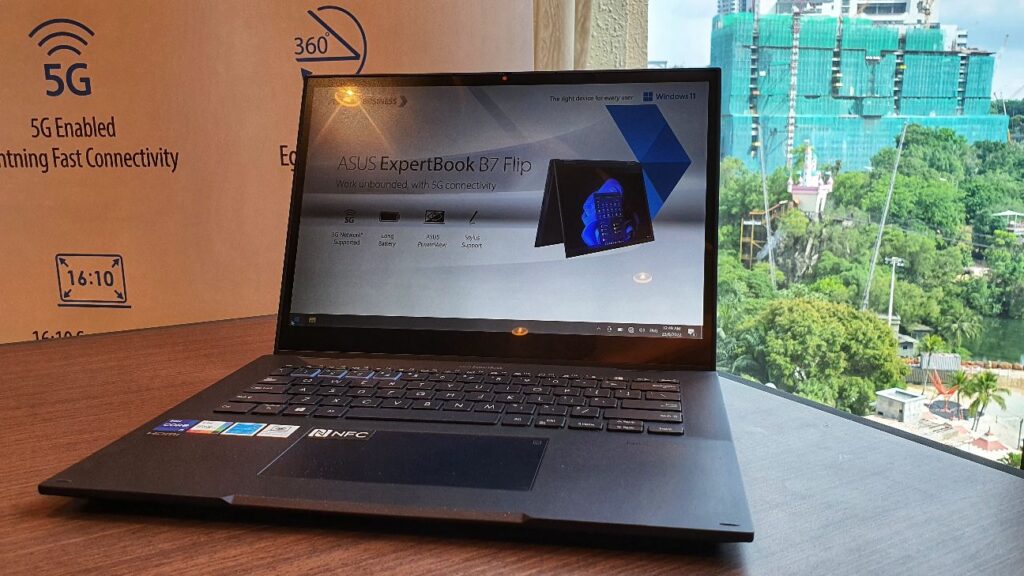 Under the hood, the test sample ran Windows 10 but retail units will run either Windows 11 Home or Windows 11 Pro on a 12th Gen Intel Core i7-1270P 2.2GHz processor with vPro and Iris Xe graphics. Alternatively, the laptop can be issued with 12th Gen non vPro Intel Core i5 and i7 CPUs as well as a vPro i5 CPU. Oddly enough, the laptop lacks Intel Evo certification though it seems to have the hardware necessary to support the standard.

In addition to the CPU, our ASUS ExpertBook B7 Flip test sample was issued with 16GB DDR4-3200 single-channel RAM, with two SO-DIMM slots which allows for after-market upgrades to up to 64GB RAM. The upcoming model will feature DDR5 support instead. The laptop also has a single NVME SSD bay which allows for upgrades up to a 2TB SSD though our test sample had a 1TB SSD installed.

On paper, the ASUS ExpertBook B7 Flip also has 5G connectivity and a built-in LTE SIM card slot. Keeping it powered is a 63Whr 3-cell lithium ion battery charged via the Thunderbolt 4 port and a bundled 65W USB-C charger.

Seeing as it’s a laptop intended for enterprise use, the ASUS ExpertBook B7 Flip implements a host of security features from within and without. It hosts a HD webcam up top of the display with a privacy shield slider as well as an IR camera riding shotgun for Windows Hello authentication. The laptop also has the aforementioned side-mounted fingerprint reader and more security conscious users have the option to add a discrete TPM 2.0 security module.

According to ASUS Malaysia, the ExpertBook B7 Flip will be available for orders by mid-July 2022 with prices from RM8,499. From our first impressions, the ASUS ExpertBook B7 Flip makes for a highly versatile corporate laptop with sufficient hardware to handle almost any business related task including photo editing when fully specced out though the lack of a GPU precludes any heavy video editing tasks. For more on the ASUS ExpertBook B7 Flip, check out their official page at https://www.asus.com/my/Laptops/For-Work/ExpertBook/Expertbook-B7-Flip-B7402F-12th-Gen-Intel/ 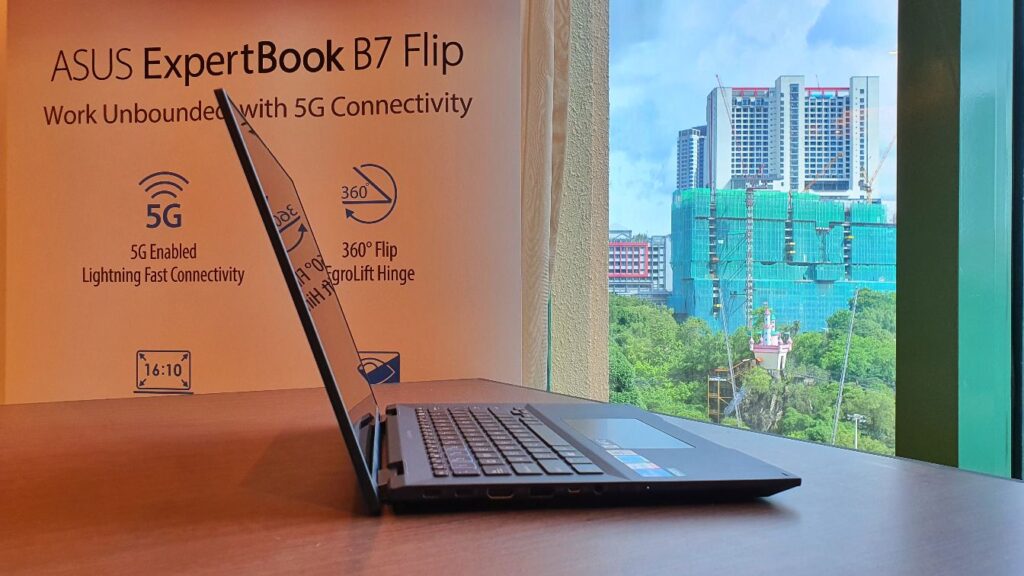