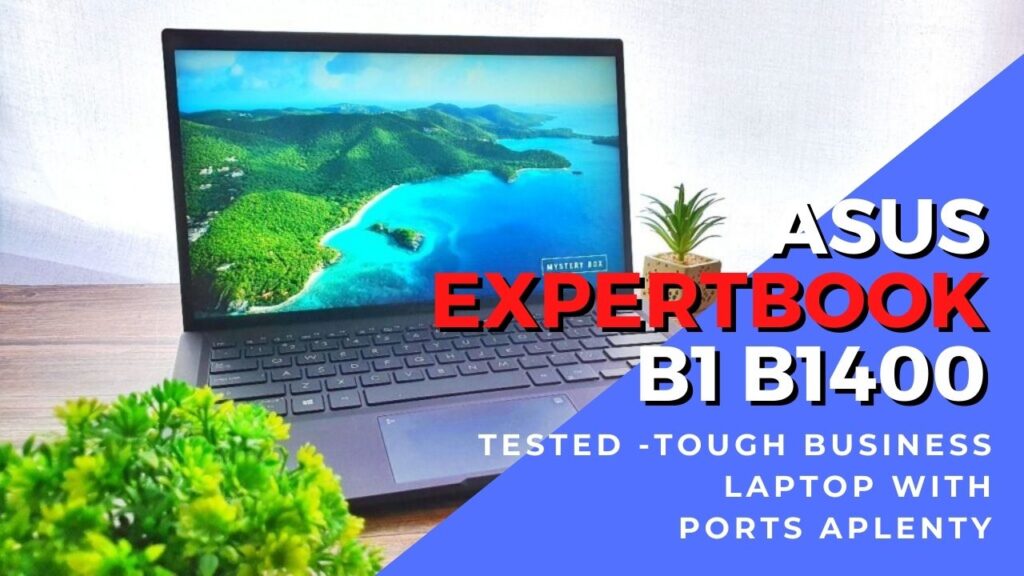 Part of the growing ASUS range of business-oriented laptops for corporate use, the ExpertBook B1 B1400 is a mainstream business laptop that bears much of the cutting edge design of the ExpertBook B9 that we reviewed last year but trims a few of its innovative weight saving features down as a concession to make it more affordable.

Our ExpertBook B1 B1400 review unit was a test sample straight from headquarters and is kitted to its maximum specifications. ASUS provided a US-style 90W AC charger with a DC-IN jack to power the laptop though it also has a Thunderbolt 4 USB-C port that supports power delivery.

ASUS ExpertBook B1 B1400 Review – Design

Externally, the ASUS B1 B1400 has a matte dark grey finish akin to the earlier B9. As a concession to cost, only the top lid and keyboard frame are made of aluminium with the bottom and sides made of polycarbonate.

In terms of design, the laptop is fairly heavy at 1.4kg which is in the median range as business-oriented laptops go and it’s a good deal heavier than the earlier B9 which weighs a mere 870g.

The top lid itself is sturdy without any creaking or give in the lid and features their Ergolift hinges that are smooth enough for easy one-handed opening while allowing it to lay all the way flat.

On the right side is a Kensington lock, an Ethernet port, a USB 2.0 Type-A port, a 3.5mm combo audio jack and a microSD card reader.

The left side features the DC-IN jack for powering it, a Thunderbolt 4 port which lets you charge it via a USB-C cable or power a display, a VGA port, a HDMI 1.4 port and a pair of USB 3.2 Gen 2 Type-A ports.

This gives it quite a well rounded ensemble of ports that handles most scenarios with ability to output to up to two 4K displays simultaneously.

The underside is otherwise made of plastic with cutouts for the downward firing stereo speakers, large grilles for ventilation and a set of rubber feet.

The 14-inch LCD display has Full HD resolution and a relatively conventional 16:9 aspect ratio with 220 nits brightness and a screen-to-body ratio of 84%. Up top, it sports a 720pHD camera with a privacy shutter.

Build quality is solid if a bit chunky with the benefit of MIL-STD-810H certification, which means that it’s able to survive a modest 120cm drop to the floor without breaking along with a number of other rather impressive feats of durability.

ASUS ExpertBook B1 B1400 Specifications

In terms of hardware, our review sample of the ASUS ExpertBook B1 B1400 has the following hardware in the table below.

Retail units for the Malaysia market have specifications that are undetermined at the time of this writing but what we have for review is the ExpertBook B1 B1400 at its fullest potential with the best hardware that ASUS can muster crammed into its 19.2mm chassis.

Our review unit is immensely powerful, with a mind-boggling amount of RAM, massive amounts of storage and the latest 11th Gen Intel Core processor. While most other ultraportables of its ilk primarily rely on their Iris Xe graphics, the B1 B1400 uses an NVIDIA GeForce MX330 to lend it some amount of pixel crunching punch.

Our ExpertBook B1 B1400 review sample features the latest 11th Gen Intel Core i7-1165G7 processor paired with a soldered in 16GB DDR4 RAM and a spare SO-DIMM slot which was equipped with 32GB RAM in the case of our test sample for a rather quaint total of 48GB RAM.

The laptop also has Iris Xe graphics courtesy of the 11th Gen Intel CPU as well as an entry level NVIDIA GeForce MX330 graphics card. It also has WiFi 6 connectivity as standard and features a TPM 2.0 chip to prevent tampering and securely storing authentication information.

Our ExpertBook B1 B1400 review sample also packs a 1TB NVME PCIe 3.0 SSD along with a 1TB SATA 5,400rpm hard disk.which gives it plentiful amounts of storage that can match most flagship laptops in the market.

Even with such an impressive array of specifications, the ExpertBook B1 B1400 unfortunately doesn’t have Intel Evo certification though our test unit fulfills many of the specifications required to meet Intel’s lofty standards.

Presumably, this is on account of the wide variety of potential configurations available as some lesser versions have far more modest hardware that can end up as low as 4GB DDR4 RAM and an Intel Celeron 6305 CPU.

The overall specifications of our version of the ExpertBook B1 B1400 make it a powerful ultraportable that is capable of handling most tasks short of gaming or intensive video editing.

This was borne out in synthetic benchmarks set in Performance mode and plugged in though some tests were barely able to run as the GeForce MX330 graphics card only has a modest amount of 2GB GDDR5 VRAM.

Here’s the benchmarks for our ExpertBook B1 B1400 review sample.

When compared to a laptop with a similar Intel i7-1165G7 processor such as the ASUS Duo 14 UX482 and Iris Xe graphics, the ExpertBook B1 B140 manages to hold its own with good benchmarks across the board, helped in part by the massive amount of RAM available and its MX330 GPU .

The results seem to be impacted to some degree by the entry level MX330 that is a bit long in the tooth seeing as it was released last year and is effectively an MX250 with a slightly higher clock speed and limited 2GB GDDR5 VRAM. Even so, its extra pixel crunching punch is still welcome.

In terms of actual performance in the field, the laptop tackled everything expected of a business ultraportable. It easily opened and swapped between three dozen tabs in Chrome without keeling over, handled spreadsheets, emails and documents in an incredibly smooth fashion and a measure of basic photo and 1080p video editing by dint of sheer brute force though the lack of a colour calibrated display means that the ExpertBook B1 B1400 is less than ideal for content creators.

ASUS ExpertBook B1 B1400 Display

Unfortunately, all potential configurations lack a display with a better colour gamut or certification beyond this which nixes its role as a content creator laptop. Screen brightness is sufficient for indoors use at 250 nits though it looks washed out in daylight.

Colours rendered on the display aren’t stellar by any measure of the word; it’s more than serviceable for paperwork purposes on its default settings with sufficient sharpness to pore through reams of text and spreadsheets, browse websites and watch videos. You can tweak it somewhat via the MyASUS app that lets you change the warmth and coolness of the display to taste.

The MX330 is an entry level graphics card but does lend it a slight advantage over other ultraportables that only feature integrated graphics.

ASUS ExpertBook B1 B1400 Review -Keyboard

One of the classic limitations of 13.3-inch ultraportables is the fact that their compact form factors limit the inclusion of  full-scale keyboards with numeric keypads which limits their utility for users who work a lot with spreadsheets or numbers in general.

Fortunately, ASUS has resolved that in an innovative fashion as it includes their NumberPad 2.0 which doubles as both a touchpad and a numeric keypad with the option to swap between both at will by simply thumbing a small icon in the corner of the touchpad.

The provided keys offer 1.5mm of key travel and are spill resistant too in case you encounter any unforeseen beverage related accidents.

I averaged a good 110wpm and touch typing wasn’t an issue even under dim light conditions on account of the single zone built-in backlighting which is done up with a clean and classic white LED light.

The NumberPad 2.0 takes a bit of getting used to as there isn’t haptic feedback when you tap a number down but the responsiveness of the touchpad means that it’s a relatively simple task.

ASUS ExpertBook B1 B1400 Battery Life

In terms of battery life, the B1 B1400 managed to last a very modest 2 hours and 14 minutes when subjected to PCMark 8’s battery life benchmark with high Performance power settings and 50% brightness on demanding Creator settings to mimic maximum performance for heavy tasks expected of content creators to give it an idea of what it’d last under the most pressing scenarios.

When retested with a more modest PCMark 8 benchmark for standard office work, which is its primary mission profile, with 50% screen brightness and a battery life optimised power setting, the laptop managed to last longer, offering 3 hours and 38 minutes  on its 42Wh battery.

Under practical field conditions with a combination of WiFi, web browsing, word processing and YouTube, the laptop managed to last a fair, if unremarkable 5 hours and 27 minutes.

In lieu of the 90W DC-IN charger, you can also charge it via the Thunderbolt 4 USB-C port. Fortunately, the provided AC charger is small and extremely light, allowing you to easily tote it about with you for all-day use. Charging it to full takes about 1 hour and 15 minutes

Is the ASUS ExpertBook B1 B1400 worth buying?

The ASUS ExpertBook B1 B1400 is intended as a more affordable version of the earlier ExpertBook B9 that we tested with the tradeoff being a less vibrant and colour accurate display and a heavier chassis.

At the time of writing, it’s hard to draw conclusions as to its intended price to performance ratio beyond assessing it purely from a performance and design standpoint as specifications units intended for Malaysia have not been confirmed just yet. What is certain for now is that it will retail from RM3,399 and up in Malaysia.

Seeing the number of potential variants available, it’s hard to peg the capabilities of the B1 B1400 but at its fullest potential like our review unit, you get a durable, high powered ultraportable with more than enough performance for general productivity related tasks. The biggest stumbling block here is its middling battery life, lack of Intel Evo certification and subpar display, meaning that it’s an option best suited for executives who aren’t constantly on the go.

The ASUS ExpertBook B1 B1400 represents a highly durable and powerful ultraportable with a useful NumberPad 2.0 touchpad, generous amounts of storage as well as a diverse variety of ports. In its most powerful configuration, the laptop proves to be an immensely capable, if slightly heavier than usual business laptop that is ideal for paperwork related tasks though the middling display which has modest colour accuracy in all possible variants mean that it’s not the best choice for content creators.

Screen colour accuracy and brightness could be better