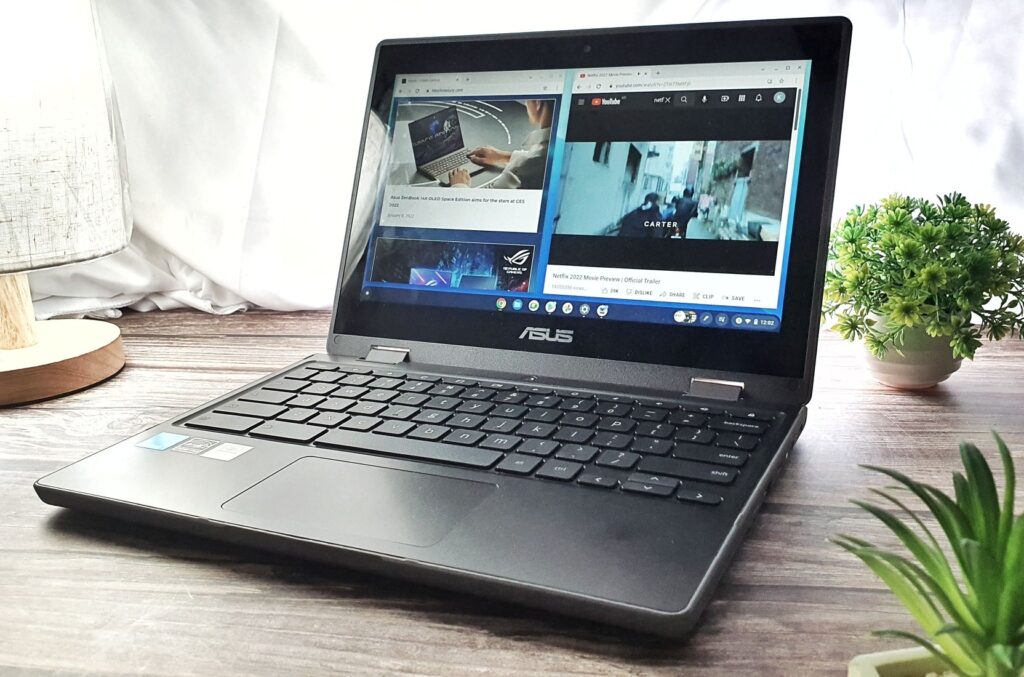 Laptops intended for young learners have a different set of requirements that are quite different from the slim, sleek and powerful speedsters in the market for content creators and power users which is where the likes of the new ASUS Chromebook Flip CR1 come into the picture..

While ASUS is best known for their sleek ZenBooks and other laptops, they’re making a name for themselves in making Chromebooks too and their Chromebook Flip CR1 convertible laptop is ideal for kids all the way up to secondary school but is it really worth the money and trouble to get one? Here’s our ASUS Chromebook Flip CR1 review where we put it to the test to see if it’s worth what you pay for. 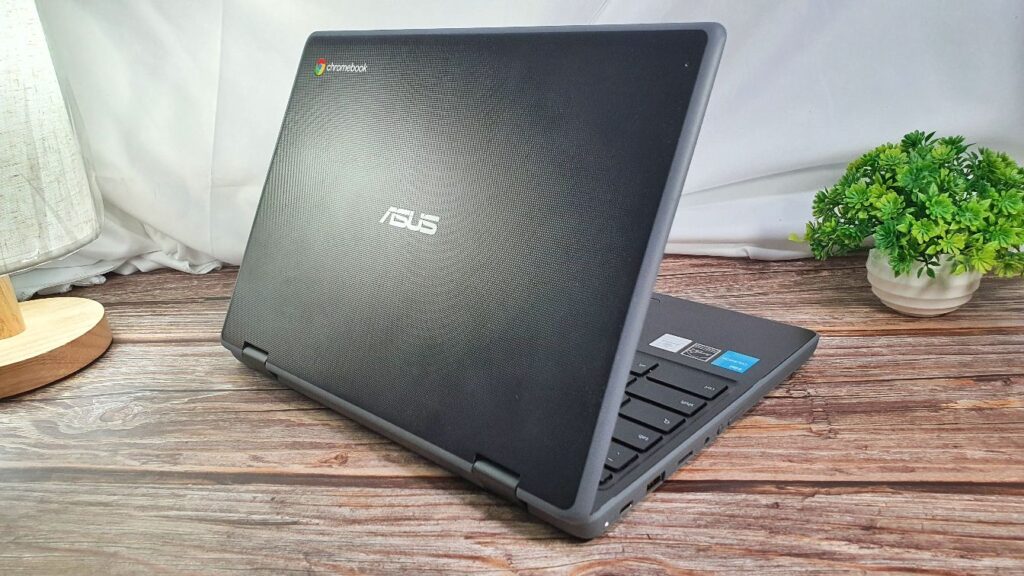 Launched near the tail-end of 2021, the  ASUS Chromebook Flip CR1 (CR1100) is, as you’d likely surmise from the name, a convertible laptop that runs ChromeOS under the hood as opposed to the usual Microsoft Windows OS.

Intended primarily for younger users, the ASUS Chromebook Flip CR1, also designated as model CR1000FKA has a fairly modest set of specifications by current computing standards but makes up for it with almost unearthly durability that would put many of its pricier siblings to shame.

Constructed almost like a Tonka toy save for its utilitarian dark grey and matte black paint job, our ASUS Chromebook Flip CR1 review sample has a MIL-STD 810H rating for toughness which is what the US Military uses to rate their hardware. To wit, this means that it’s able to survive in extremes of temperature that would junk a normal laptop and is able to survive a 120cm drop to the floor.

That’s not all as it also has a splash proof keyboard too. What all this means is that you can give it to a young learner in kindergarten or primary school and expect the laptop to realistically survive usage for the duration of their studies until secondary school without turning into an expensive art deco sculpture.

To achieve this almost absurd level of toughness, ASUS has added tough rubber bumpers to the corners, added a textured top lid and underside that makes it resistant to fingerprints and possible slippage and they’ve also added in a raised rubber grip on the underside that also helps to raise the laptop slightly for better ventilation. 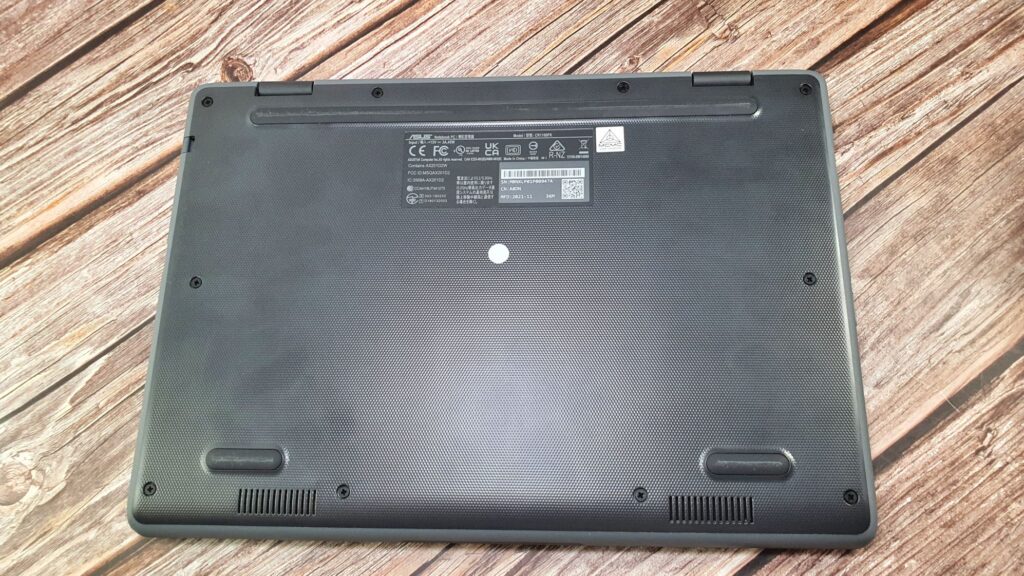 The top lid itself is otherwise plain save for an ASUS logo emblazoned in the middle and a Chromebook logo set in a corner. The underside of our ASUS Chromebook Flip CR1 review sample has no ventilation grilles save for a downward firing pair for the built-in stereo speakers along with a set of Phillips screws to allow for easy maintenance.

There isn’t much that can be done to upgrade the laptop as the RAM has been soldered in and the aren’t any expansion slots for additional storage. with the onboard storage being an EMMC drive soldered to the motherboard. Out of the box, ASUS has thoughtfully bundled a 45W USB-C charger to keep the laptop juiced in the field.

On the right side of the ASUS Chromebook Flip CR1 you get a Kensington lock, an integrated stylus, a USB-C 3.2 Gen 1 port with support for display/power delivery and a USB-A 3.2 Gen 1 beside it too. 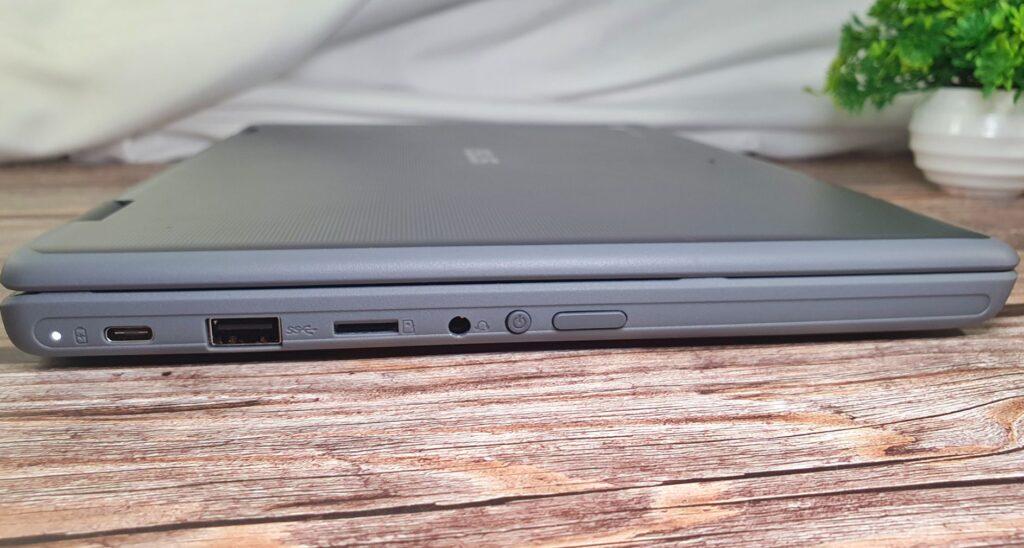 While variants in other regions get LTE or a microSD slot, our ASUS Chromebook Flip CR1 review sample which corresponds to local units in Malaysia has the port fused shut and is non-accessible. 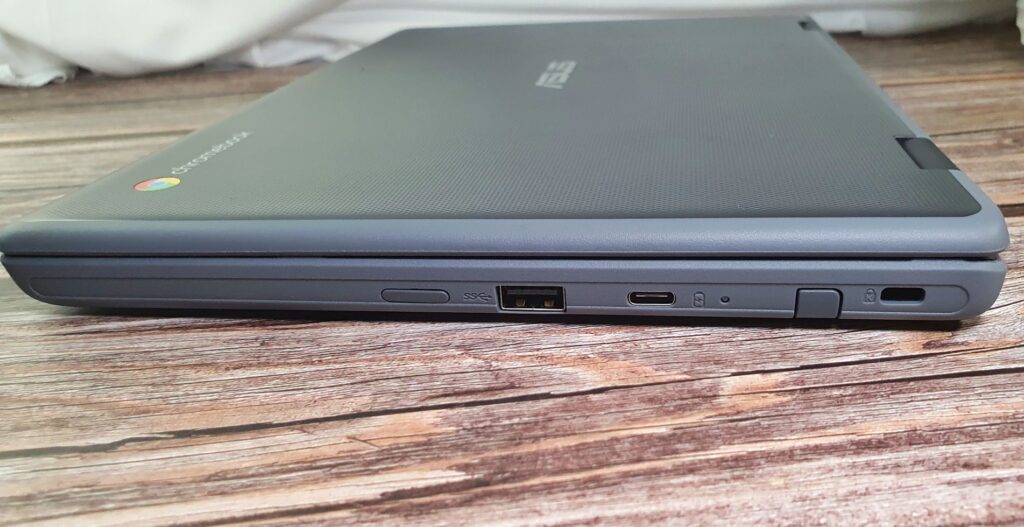 On the left side you get another matching pair of USB-C and USB-A 3.2 Gen 1 ports, a microSD card reader to augment the memory, a 3.5mm audio jack, a power button and a volume rocker. The buttons are admittedly plasticky but they’re responsive which is a far more important criteria at this price range.

Bearing in mind its intended target audience, the laptop has exceptionally sturdy hinges that keep the laptop in its intended position without any wobbling whatsoever though the tradeoff here is that they’re a bit on the stiff side. Opening it is a two-handed job and while they’ve created a slight notch in the bottom lid to make it easier to gain purchase, it’s still a bit of a challenge to open it even with two hands.

When opened, you get a fairly conventional keyboard layout though it lacks a function key row and instead has shortcuts to go forwards and backwards in a browser, refresh a browser, minimise a window, increase or decrease brightness, tweak volume and the option to password lock the laptop. 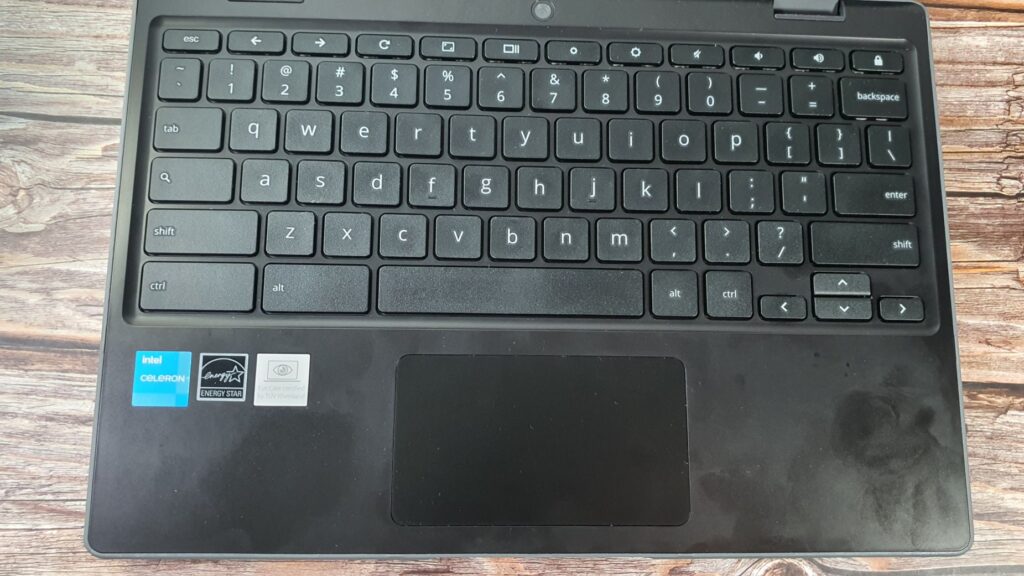 The keys are not backlit and are designed to be tamper proof with almost no gap between the tray and each key to prevent them being pried open by inquisitive minds. It’s also splashproof and is able to survive a spilled drink or two without permanent damage.

Oddly enough, the Chromebook has an 8MP world-facing camera mounted at the top of the keyboard that is intended to be used when folded in tablet mode for taking pictures. The touchpad itself is slightly recessed into the keyboard tray and is rather plasticky to the touch.

The display on offer with our ASUS Chromebook Flip CR1 review sample is a modest 11.6-inch 720p display with top and bottom bezels that are almost an inch thick with the side bezels being about half an inch thick, resulting in a touch display that has a rectangular 16:9 aspect ratio with a 60Hz refresh rate and modest brightness and sharpness. Inset in the top bezel is a modest 5MP camera for video calls.

Overall build quality is exceptionally sturdy which helps ensure its survivability over the long term though it is admittedly plasticky but that’s not a major deal breaker seeing the intended audience for the ASUS Chromebook Flip CR1. The key benefit with its design is that for what you pay for, you’re getting a laptop and a tablet in one form factor rather than having to fork out for two separate devices.

Our version is the higher end variant with 8GB RAM and 64GB eMMC storage that costs RM1,999. The cheaper version costs RM1,689 but halves the RAM and storage. Fortunately, you can still augment it via a side-mounted microSD card slot. You cannot augment the RAM or the eMMC storage as it has all been soldered in.

In terms of connectivity, the laptop features fast WiFi 6 and Bluetooth 5.2 with support for outputting to an external display via the two USB-C 3.2 Gen1 ports. Here’s how it stacks up on paper:

The nature of Chrome OS means that it relies heavily on browser-based applications and apps from the Google Play Store. Once you fire it up, you’ll be prompted to sign up for a Google account to get things started or use a Guest account though you won’t get very far with one. Much like earlier incarnations of ChromeOS, there’s a set of shortcuts at the bottom including one for Google Assistant with voice support as well as important laptop settings.

When subjected to synthetic benchmarks, our ASUS Chromebook Flip CR1 review sample got the following results:

Chrome OS was able to swap between apps and browser tabs at will and if you’re at home with Google’s suite of apps, you’ll take like a duck to water with the Chromebook Flip CR1. You’re also able to install the usual extensions for browsers including ad blockers and the like for a relatively hassle free web browsing experience.

While most apps work from the Google Play Store, including Google Docs, Gmail, Google Classroom and the like, it’s not particularly ideal for gaming and Call of Duty Mobile wasn’t able to run though PUBG was able to chug along on basic settings in emulator mode if that’s any comfort. More basic games like Angry Birds and Candy Crush will do quite well here. 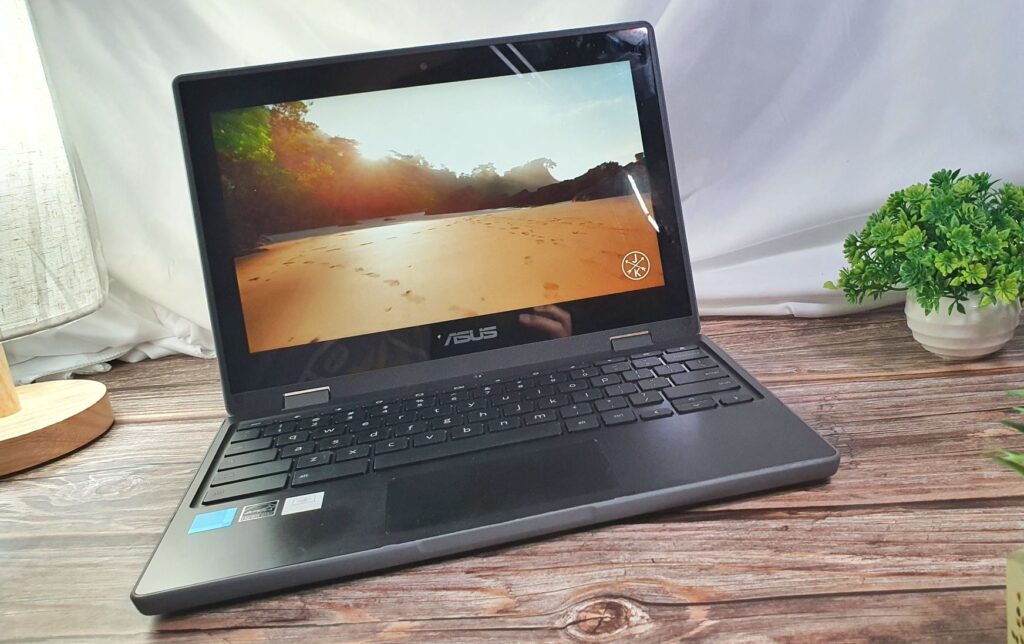 If you keep your expectations modest and focus primarily on classwork and web browsing, the ASUS Chromebook Flip CR1 performs wonderfully. Via Canva and CapCut, you’re also able to do a bit of basic content and video editing for a class project.

Video calls are sorted out via the app version of Zoom without issue and it’ll handle Google Duo without problems though the underwhelming nature of the 5MP videocall camera and 8MP world-facing camera inset into the keyboard means that you’ll need bright lighting or daylight for best results.

The addition of a touchscreen and 360-degree hinges means that the Chromebook Flip CR1 is exceptionally versatile as you’re able to use it as a traditional laptop, as a display and as a tablet rather than having to buy all three devices separately.

Unfortunately, the limitations of Chrome OS become apparent especially for natives of Windows OS. The obtuse file system in Chrome OS means that it will likely frustrate younger users and the need to be online to make full use of its capabilities means it works best in a classroom setting.

Overall battery life is excellent, helped in part by the modest needs of the OS and the large battery. All-day battery life is very possible with a standard classroom usage setting though using it to stream video all day will likely drastically cut battery life.

Should you buy the ASUS Chromebook Flip CR1 (CR1100)

The ASUS Chromebook Flip CR1 shines in its intended mission profile as a laptop intended for young learners. Combining tough build quality, a robust Chrome OS and the ability to turn from a laptop into a tablet at will along with a bundled stylus, it’s a versatile, capable laptop that’s great for the classroom and can easily last all the way to secondary school.

It looks somewhat pricey at first glance but you’re paying for its ability to survive punishment, perform multiple roles as a laptop, tablet, display and drawing stylus and getting the job done in an effective fashion. 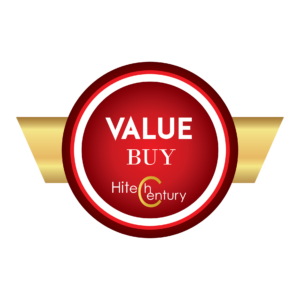 For a limited time, ASUS Malaysia is offering a free trial programme that allows students and educators alike to truly experience what the ASUS Chromebook CR1 (CR1100) series is capable of in an actual classroom setting. For schools and parents wishing to experience a free trial of the ASUS Chromebook CR1 (CR1100) series, please visit their official site to register 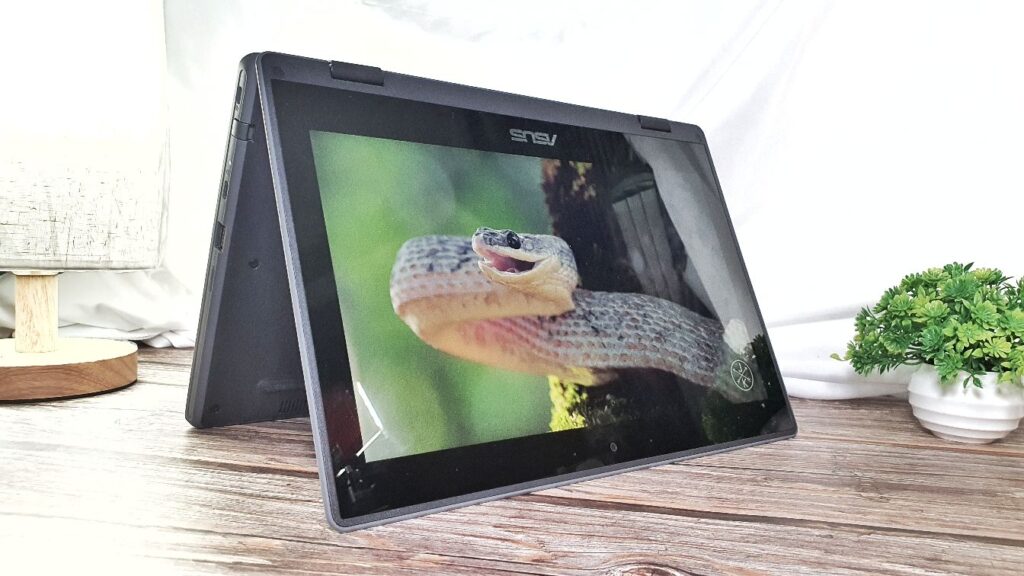 The ASUS Chromebook Flip CR1 (CR1100) convertible combines a PC and a tablet into one sturdy form factor along with a stylus for good measure. Factor in its modest price point and the robustness of Chrome OS and you have a choice that’s ideal for young learners all the way to secondary school.