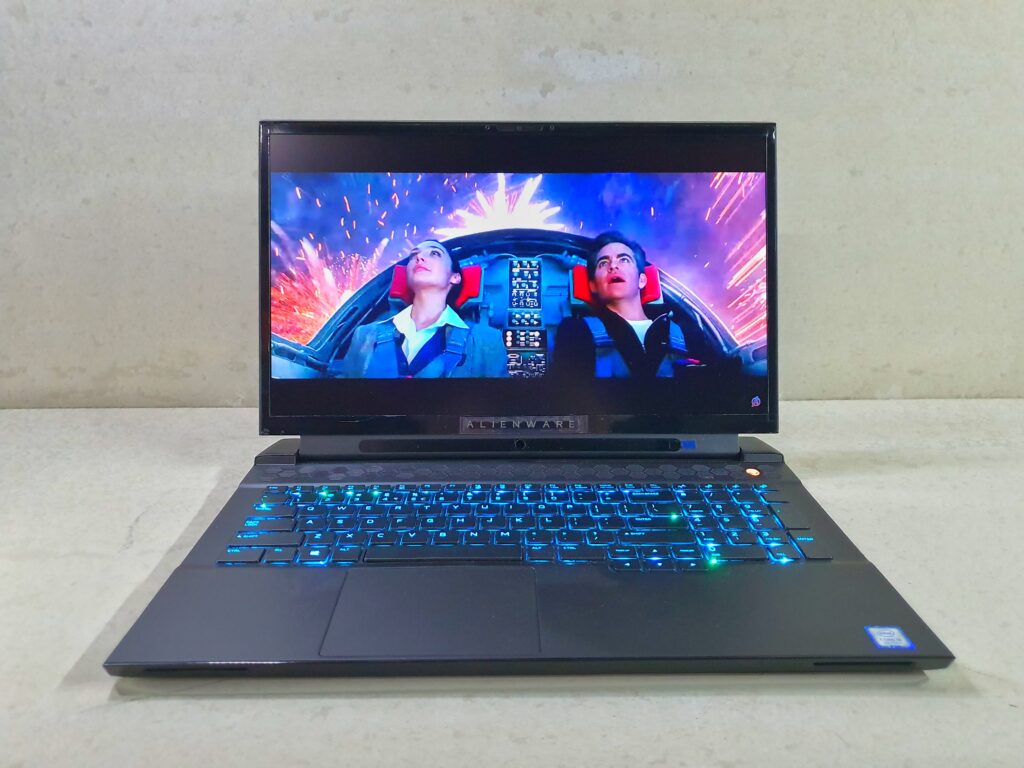 First glimpsed at the Dell and Alienware showcase that took place in Taiwan amidst Computex 2019, the Alienware M17 R2 is an interesting design as gaming notebooks go as it forgoes the usual emphasis on either form or function to the exclusion of the other, and instead has a wonderful balance of both to create what is arguably one of the best looking (and powerful) gaming rigs that we’ve ever laid eyes on in aeons. 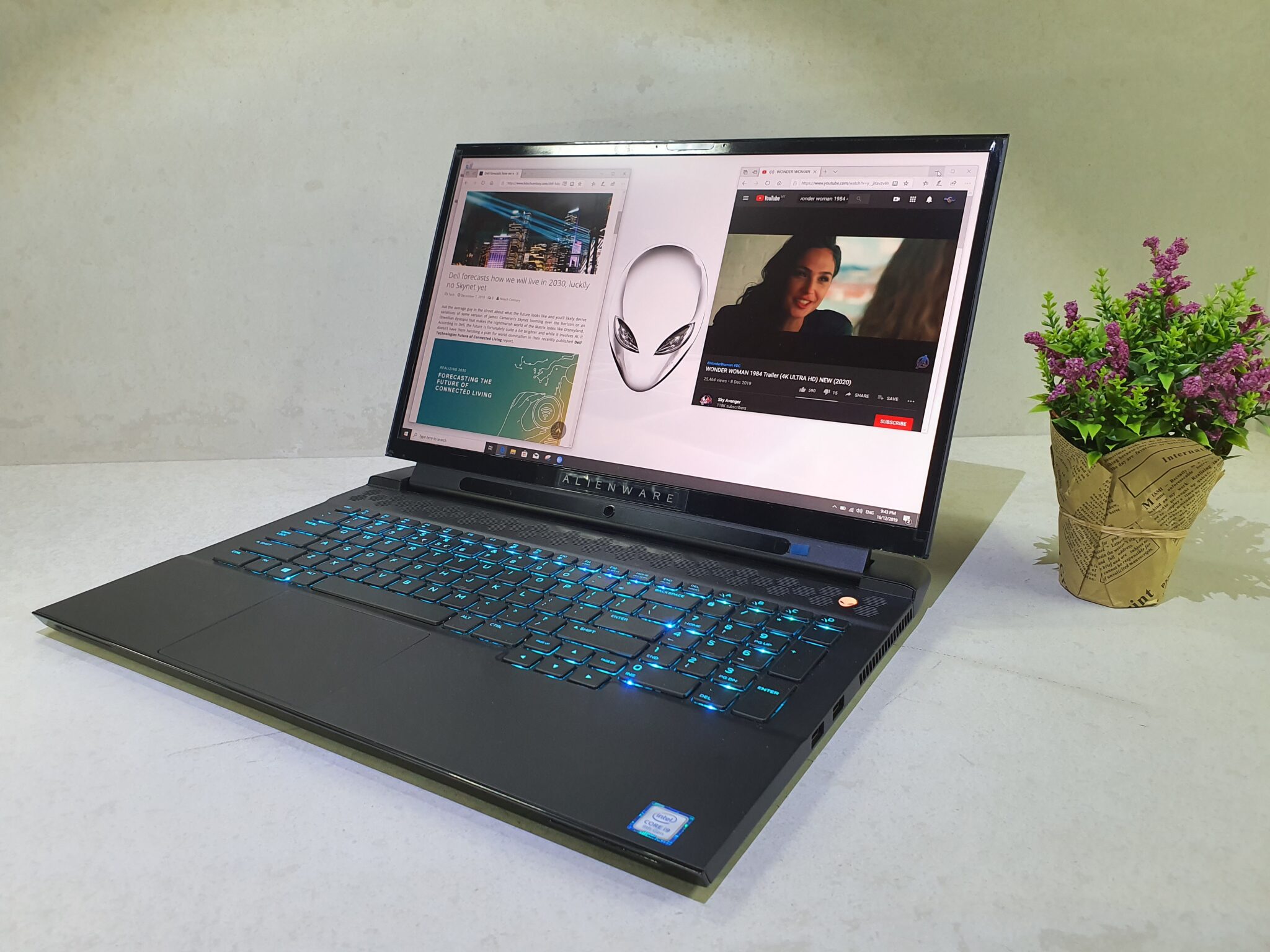 A midtier model exists that has similar specifications but upguns the GPU to an NVIDIA GeForce RTX2070 with 8GB GDDR6 with Max-Q design for RM800 more for a grand total of RM10,999.

We managed to score the highest end variant with everything maxed out and dialled to eleven. The highest end variant has prices starting from RM12,799 with a similar 17.3-inch FHD display with Tobii Eyetracking tech, a 9th Generation Intel Core i7-9750H CPU, 16GB DDR4 2,666MHz RAM and a 512GB PCIe M.2 SSD.

Our maxed out variant comes with a beefy Intel Core i9-9980HK octacore processor with the rest of the specifications remain the same for the princely sum of RM15,856.

Needless to say, the price tag for any configuration of the Alienware M17 R2 is daunting, even for the entry level configuration, but you’re not paying just for the hardware alone but a whole raft of other beneficial features which we’ll delve into shortly.

This new design language, appropriately dubbed by Alienware as the Legend industrial design, has resulted in a chassis that is just 19.5mm thin, making it one of the slimmest gaming notebooks of its size currently on the market. 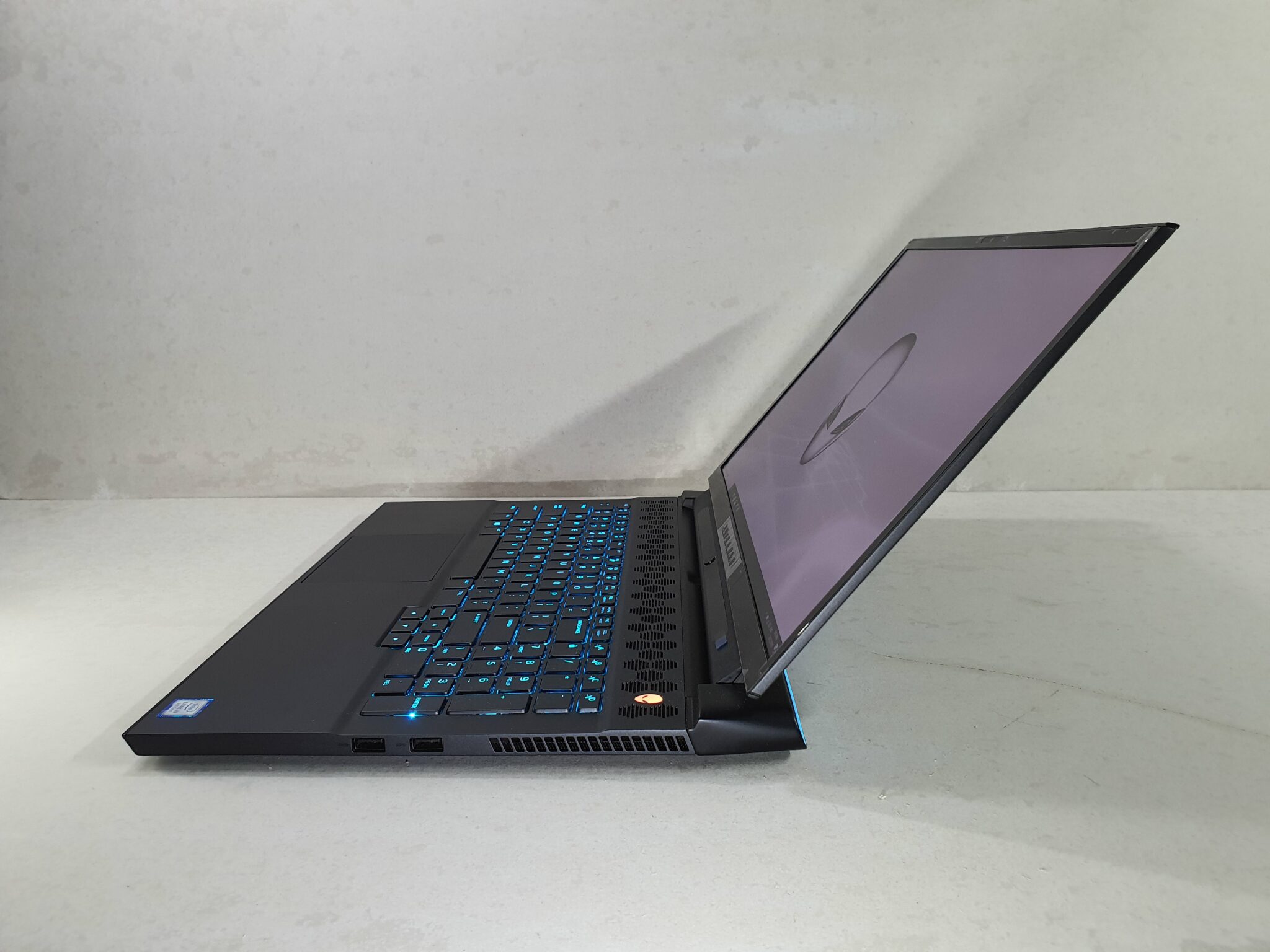 It’s a rather strong hint but it’s somewhat obvious that the design team responsible for the Alienware M17 R2 are Pink Floyd fans on account of how they’ve named the colour schemes available for the notebook.

In Malaysia, the Alienware M17 R2 only comes in a dark shade of matte black aptly called – wait for it – the Dark Side of the Moon though other regions have a niftier looking Lunar Light white finish. Fortunately, the matte finish repels fingerprints nicely which makes it all the more pleasing to the eye. 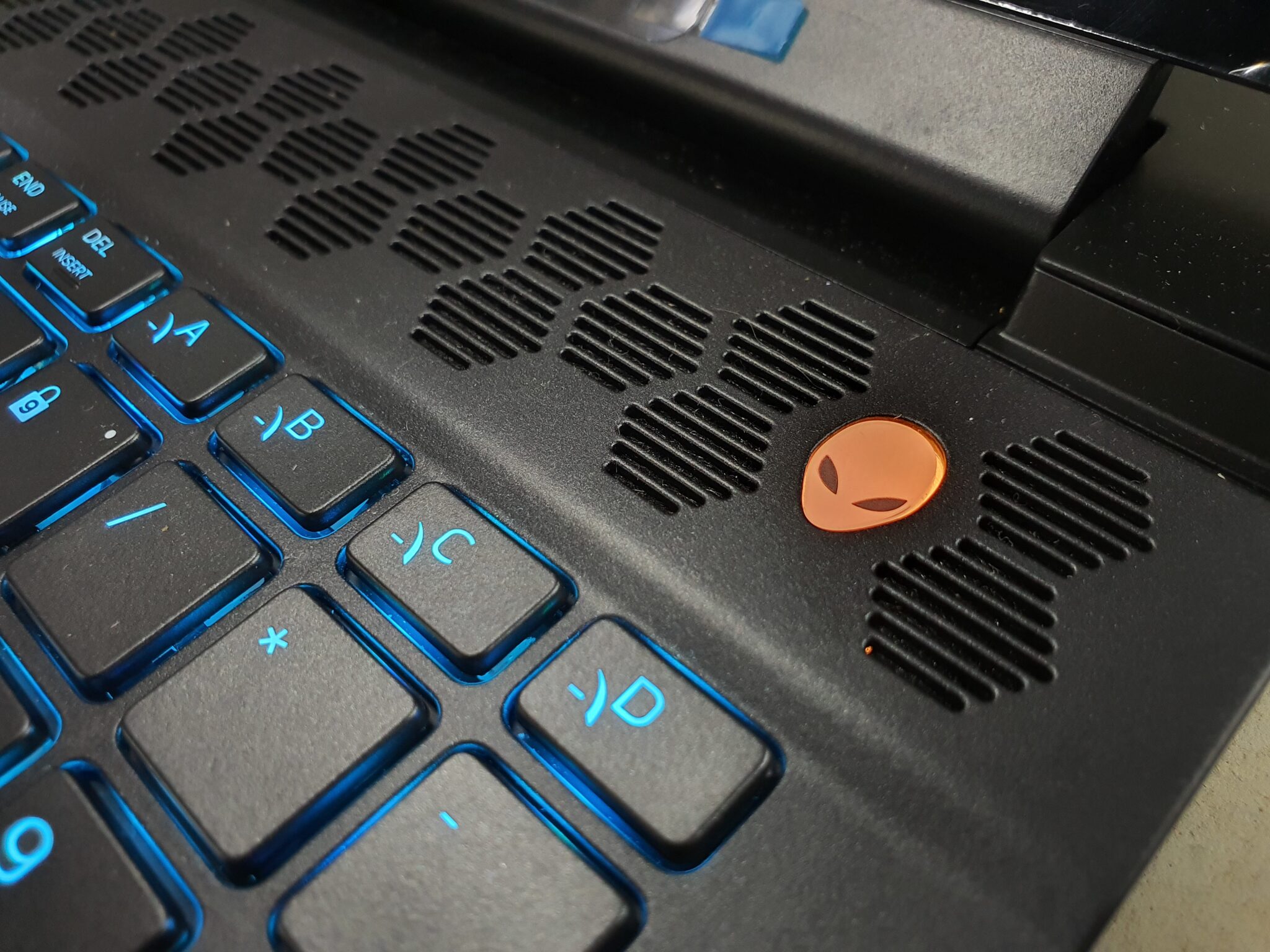 The Legend Industrial design features a combination of sharp angular lines, gentle curves at key points and a honeycomb motif around the ventilation grilles, making it highly distinctive and is visually unmistakable when plonked next to the usual chunky array of gaming notebooks out there.

Rather than cramming in a psychedelic array of blinking LED backlighting willy nilly all over the notebook, the Alienware M17 R2 tastefully limits the bling to the extent of six-zone RGB backlighting on the keyboard, an LED backlit Alienware logo on the top lid as well as the stylised power button and in a narrow LED strip along the rear housing.

As far as ports are concerned, Alienware has strategically spaced them out across the rear as well as the left and right sides of the notebook with ports seeing less use thoughtfully emplaced on the back.

The impressive part is that Alienware managed to accomplish this feat without any compromise on cooling or performance as you can max it out with an NVIDIA RTX 2080 GPU with Max-Q design  and 8GB GDDR6 VRAM and an overclockable Intel Core i7-9980HK processor though this is at the expense of a much wider footprint on your desktop than usual with the rear housing jutting out somewhat from where it would usually be flush with the hinges on account of Alienware’s robust Cryo Tech V3.0 cooling systems to keep the heat under control. 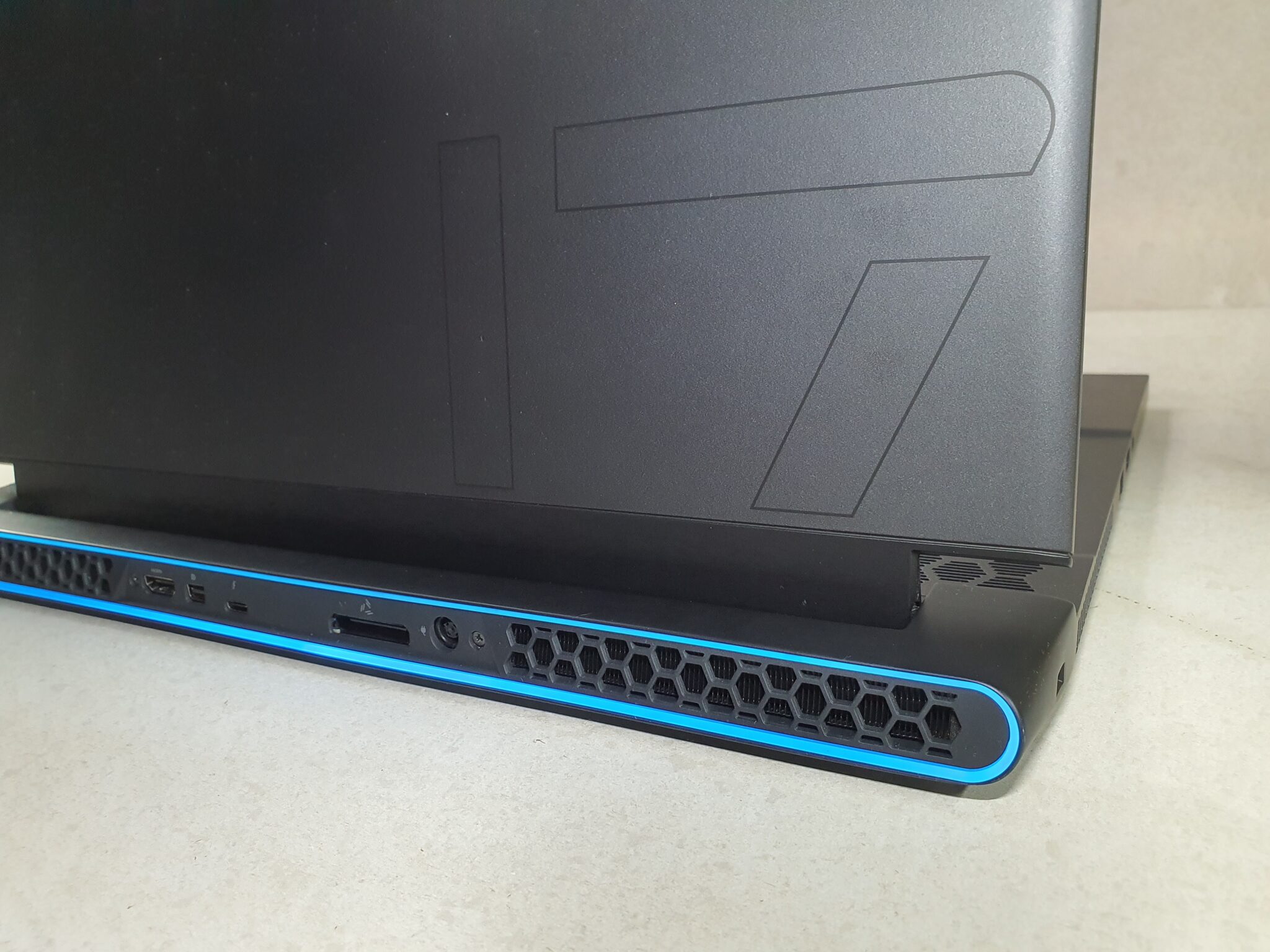 Our test unit had maxed out specifications including the above Intel Core i7-9980HK CPU and an NVIDIA RTX 2080 with Max-Q graphics card paired with a 512GB SSD and 16GB DDR4 RAM. The maxed out specifications are pleasingly powerful – assuming you have sufficiently deep pockets – but the biggest downside here  is that the RAM is permanently soldered in so there’s no option for adding more regardless of whichever configuration you purchase for the Alienware M17 R2.

Even so, what you have is more than enough to tackle any game currently in the market including Borderlands 3, Ghost Recon Breakpoint, the Division 2 and almost everything else you can name for quite a few years down the road at maximum settings.

The right side of the notebook comes with a pair of USB 3.1 Gen1 Type-A ports while the left comes with a Killer Networks E2600 Gigabit Ethernet port, a USB 3.1 Gen1 Type-A port with Powershare tech that lets you charge other kit like phones off the notebook’s internal battery and an inline audio jack for headsets. The rear comes with a HDMI 2.0b port, a mini display port 1.4, a Thunderbolt 3 port, the obligatory DC-In power port to keep it juiced and an Alienware Graphics Amplifier Port to allow for you to augment the notebook with an external GPU.

The top lid itself is a swath of matte black broken up by an RGB backlit Alienware logo in the centre along with a faint motif of what looks like an I and a 7 stylistically emblazoned in the corner.

Flip the lid open and you’re greeted with an impressive full-sized keyboard that has per-key customisable RGB backlighting with a dedicated numeric keypad. The keyboard also sports a quartet of customisable shortcut keys for macros and the like. Much in the vein of many gaming notebooks, the touchpad is emplaced slightly left of centre and is generously sized for ease of use. Each of the keys on the keyboard have enhanced key travel this time around versus the previous M17 at 1.7mm along with the usual N-key rollover and anti-ghosting tech.

Perched just beneath the 17.3-inch FHD panel is a Tobii Eye Tracking array for use in selected games like the Division while up top is a webcam for video calls and the like. The display itself is impressively equipped and optimised for gaming with a 144Hz refresh rate, 9ms response time, a brightness of 300nits and also has Eyesafe Display Tech to ensure its easier on the eyes by reducing blue light emissions from the display.

Overall build quality is excellent with no wobble in the hinges with the whole affair feeling extremely sturdy. The only quibble here is the size of the Alienware M17 R2 as it’s just too wide to fit into most conventional backpacks. The provided power brick is also immensely heavy and unwieldy as well which further adds to its portability issues.

High specifications and slick design are just one part of the equation to what makes a great gaming notebook. One of the key concerns with a portable gaming solution is how it tackles heat and it’s often a compromise in terms of specifications to keep the heat under control, or the implementation of a more robust cooling solution; the Alienware’s M17 R2 goes for the latter option and ensures its beefy ensemble of kit stays cool even under heavy workloads via their Cryo Tech V3.0 cooling array.

Essentially, the Cryo Tech V3.0 cooling array features a dual-intake, dual-exhaust airflow design that pulls in cool air from the top and bottom vents and shunts it out through the rear and side vents.

This works in conjunction with four heat pipes and a liquid-crystal polymer fan blade  also act to vent heat away from the GPU and CPU. In terms of improvements over the older Cryo Tech V2.0 array, the new array has a 32% increase in diameter for the CPU cooling fan blades, a 10% increase in diameter for the GPU fan blades and 25% obstructions and thus better air flow. The end result, theoretically speaking is that it’s able to sustain better performance without thermal throttling for longer periods of time. 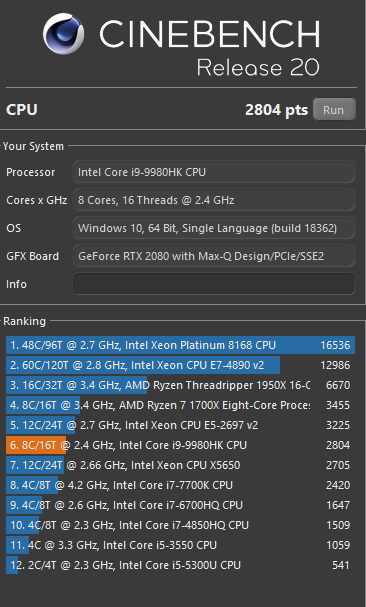 In terms of synthetic benchmarks, the Alienware M17 R2 performed favourably across the board. In Cinebench R20, it got an excellent score of 2,804 points. In 3DMark’s Time Spy Extreme benchmark, it got a respectable score of 3,477 points while the less demanding TimeSpy test got 7,374 points. In the Port Royal benchmark which tests a notebook’s capability to handle real time ray tracing (RTRT), it got a solid score of 4,370 points. 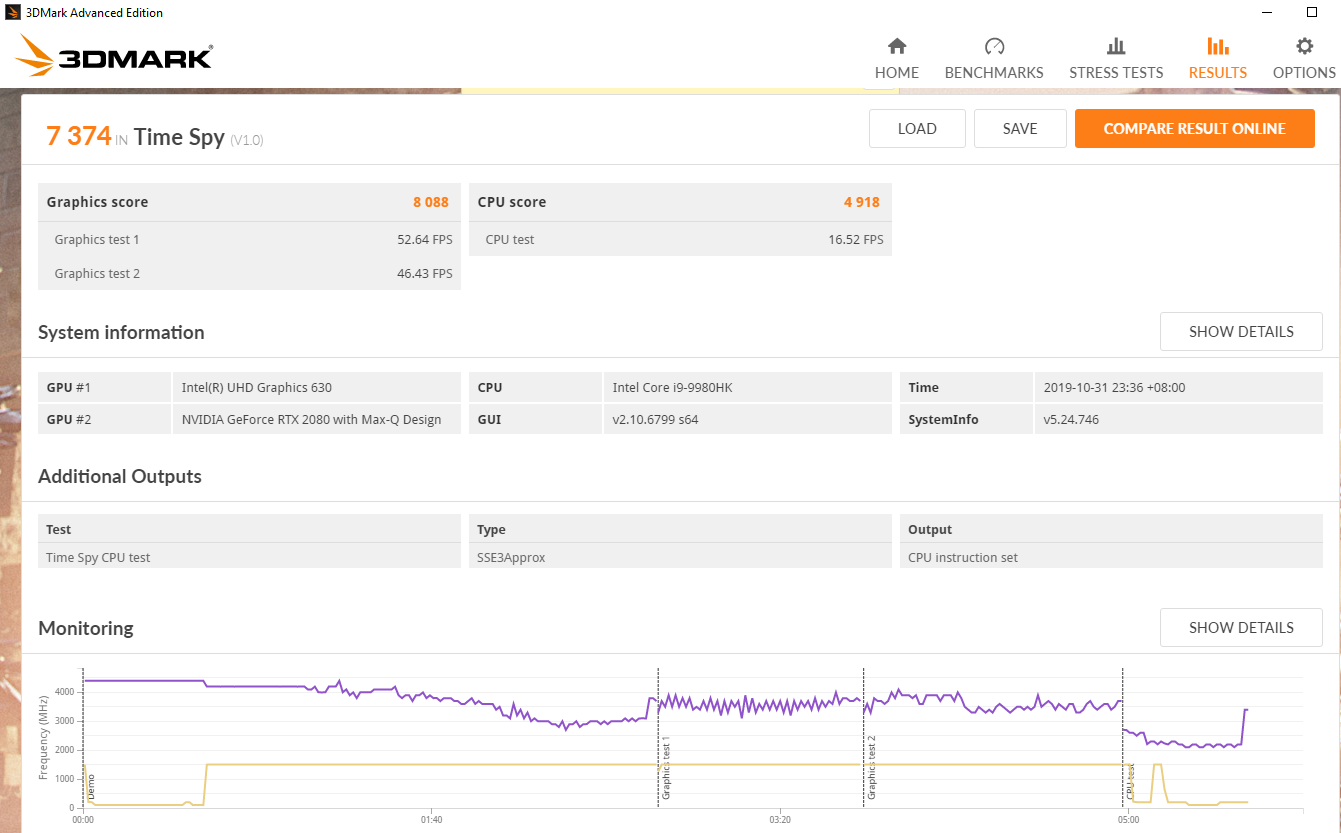 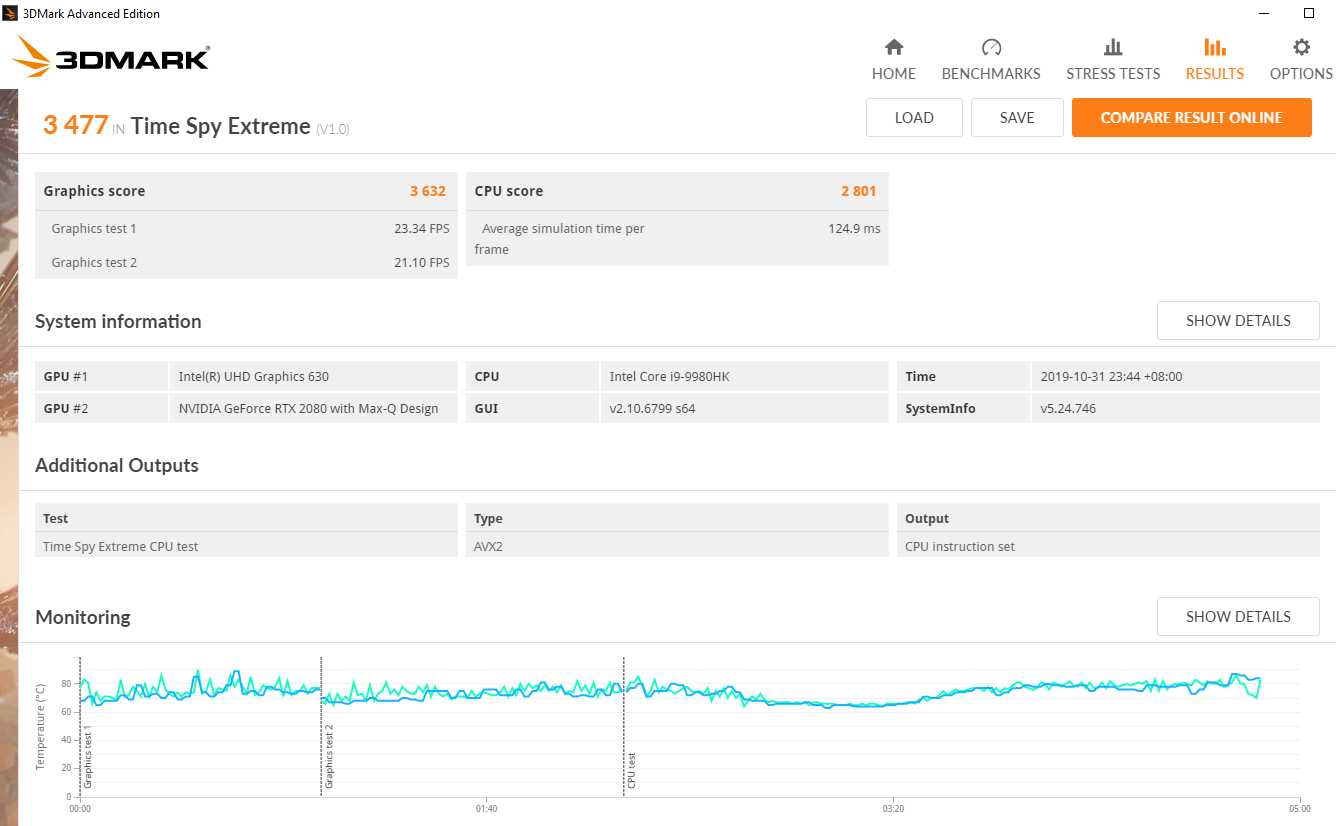 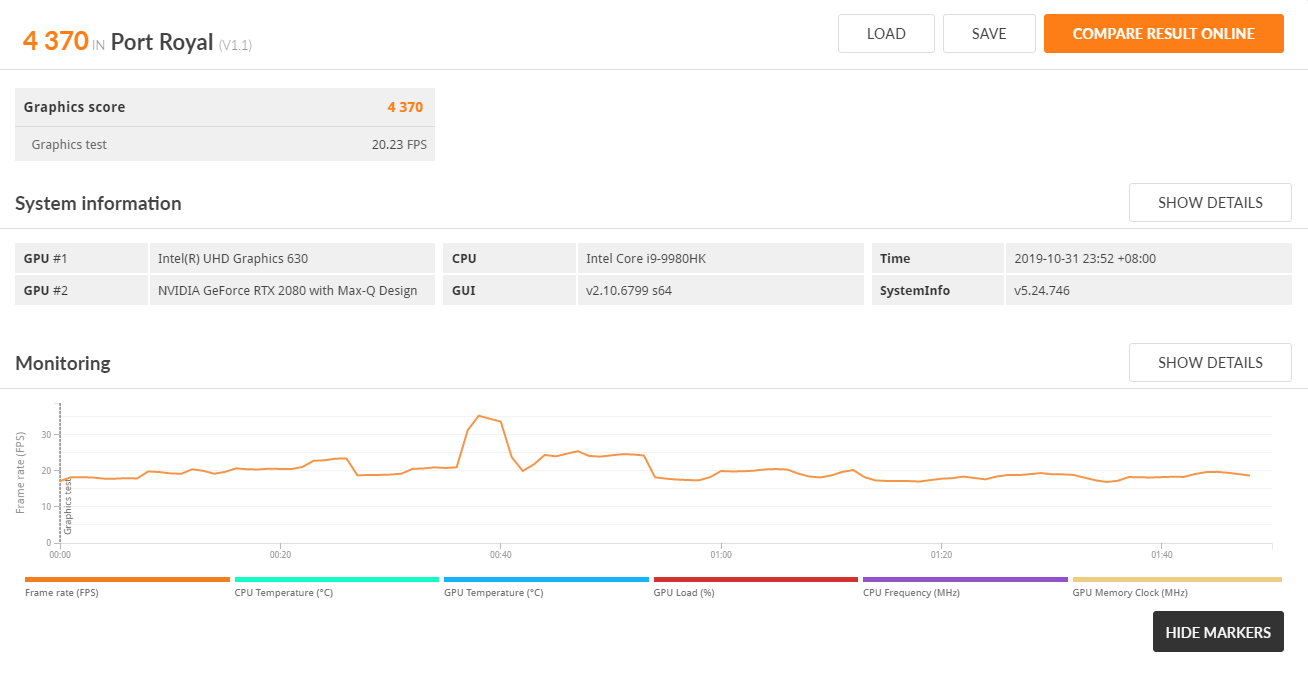 In the SuperPosition Unigine benchmark on the 4K Optimised settings yielded a score of 6,672 points. In PCMark 10, it got a great score of 5,064 points. 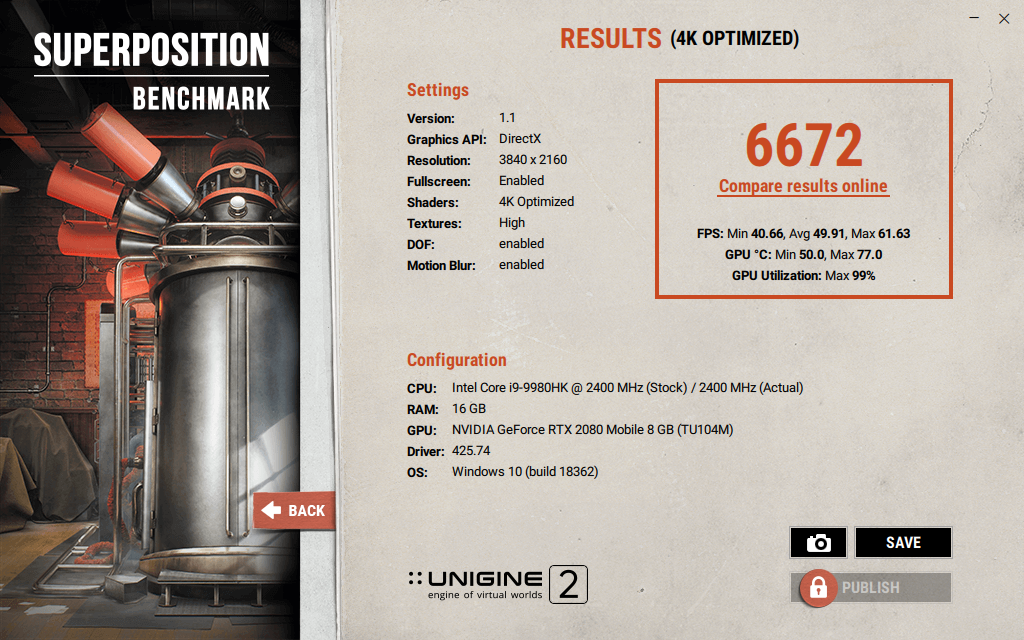 Across the board, the Alienware M17 R2 performed with flying colours. The notebook ran whisper silent with the built-in CryoTech V3.0 fans and heat pipes ensuring that the temperature remained manageable with the fan blades even at heavy loads being just slightly louder than a whisper even under intensive gaming in Tom Clancy’s Ghost Recon Breakpoint and Borderlands 3. In Borderlands 3, we managed an impressive 80fps on high settings with almost everything dialled to maximum.

In more mundane tasks, the notebook was sheer overkill. Over two dozen opened browser windows in Chrome as well as a 1080P YouTube video were handled without any discernible lag and heavy multi-page spreadsheets as well as 1080P video editing were tackled without issue. 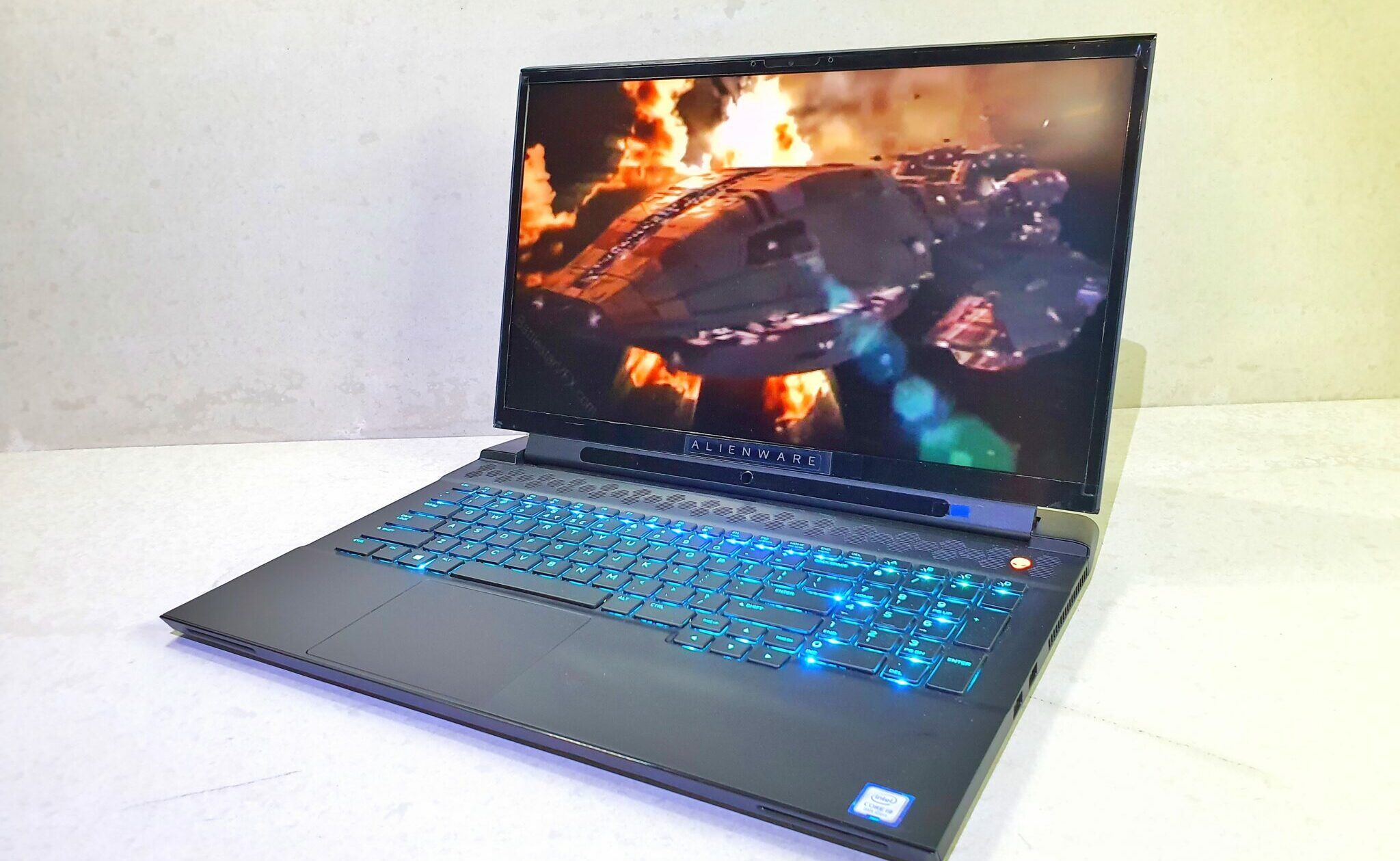 Even after several hours of intensive gameplay, the Alienware M17 R2 only proved to be slightly warm to the touch in critical areas like the keyboard and palm rests with the vast majority of the heat shunted to the side and rear vents.

The provided display did not disappoint with exceptional detail and colour rendition with beautifully deep blacks and brilliant whites onscreen, making it ideal for both gaming and movies alike.

The fast 144Hz refresh rate and 9ms response time. The Eyesafe Display tech worked like a charm, allowing us to use it for hours at a time in stretches of six hour shifts without encountering undue eyestrain. The speakers themselves were top notch, serving up excellent audio quality with a fair amount of detail and the ability to kick out distortion free audio when dialled to maximum. 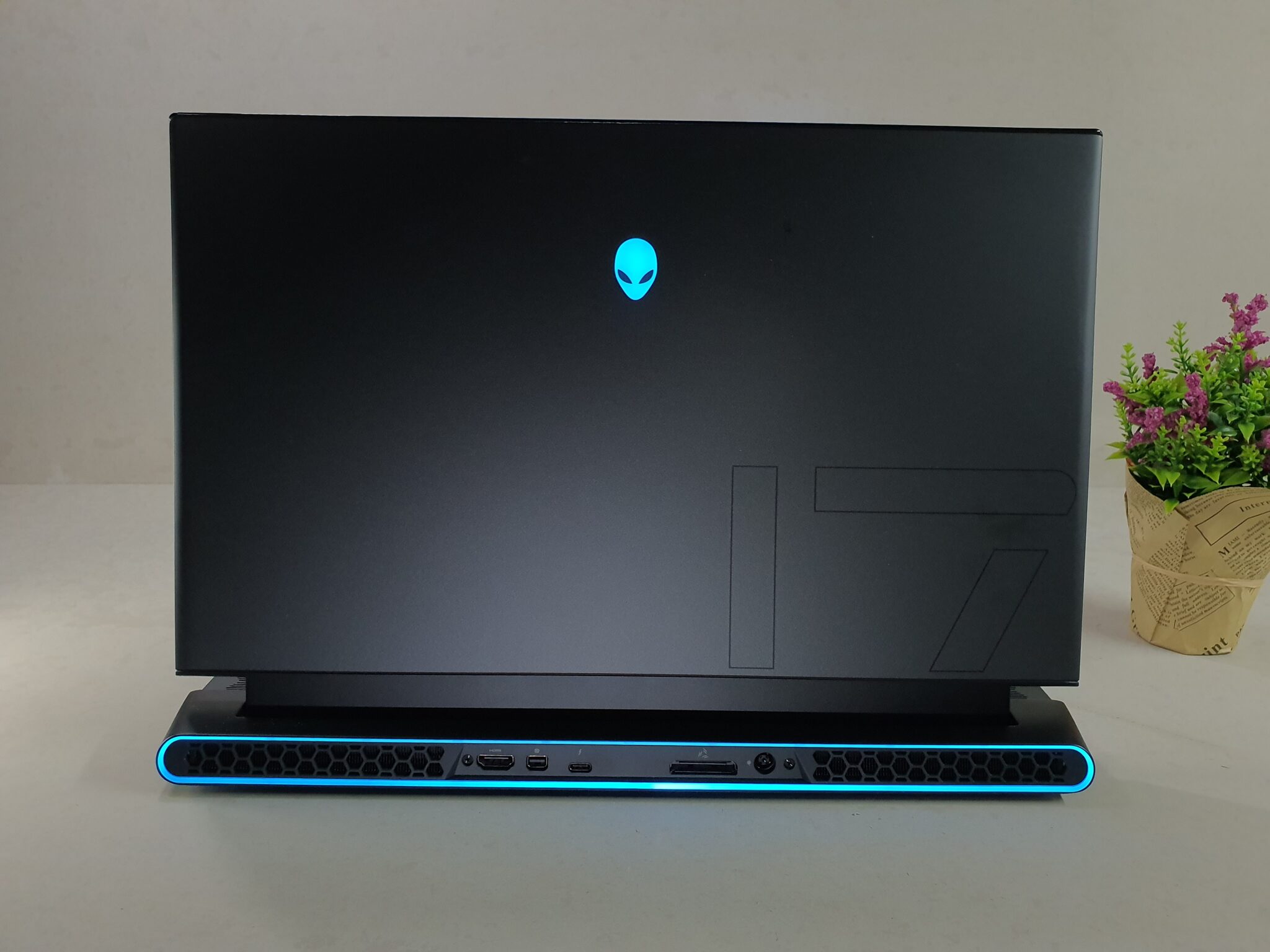 The provided full-sized keyboard proved to offer an excellent typing experience with the ability to customise the lighting via the Alienware Command Center all the way down to lighting for specific games. The keys were highly responsive, allowing for us to hit 110WPM without undue trouble.

Under an average workload of productivity apps, several open browser windows and streaming video, the Alienware M17 R2 managed a very middling four and a half hours of usage before needing a recharge. It’s not the best in terms of endurance nor is it remarkable but it’s certainly enough for you to nip out for a short business meeting or work at a coffee shop before heading back to the office. Anything more intensive or gaming related means you’ll have to tote the rather huge power brick and cable along with you.

As it stands, the Alienware M17 R2 is an immensely powerful gaming rig with its impressive Intel Core i9-9980HK and NVIDIA RTX 2080 with Max-Q graphics card, all of which are wrapped in an exceptionally slim and distinctive looking chassis. If you’re looking for one of the slimmest and most powerful gaming rigs currently available, the Alienware M17 R2 is way ahead of the pack.

What we liked Excellent keyboard, beautiful and slim design, superb performance, great cooling performance
What we didn’t Not cheap, only has 1080P FHD as screen option, RAM soldered in
We say Powerfully built and beautifully designed, the Alienware M17 R2 is a show stopper of a gaming rig that doesn’t come cheap and has a few minor quirks of its own, but proves to be one of the most powerful and good looking gaming notebooks that money can buy.