The Acer TravelMate P2410 laptop strikes an all-business aesthetic about it as it comes hewn from sturdy polycarbonate with an angular, matte black design that’s ideal for corporate concerns.

Externally, the laptop is almost entirely machined from polycarbonate with a very practical matte black finish from top to bottom that is immensely fingerprint resistant. The right side comes with a port for charging the laptop, a Kensington lock, an SD card card as well as a trio of USB 2.0 ports. The left side comes with quite an eclectic selection that covers all the essentials. You get an Ethernet port, a D-Sub, a USB 3.0 port, a USB Type-C port, a HDMI port and a 3.5mm audio jack. 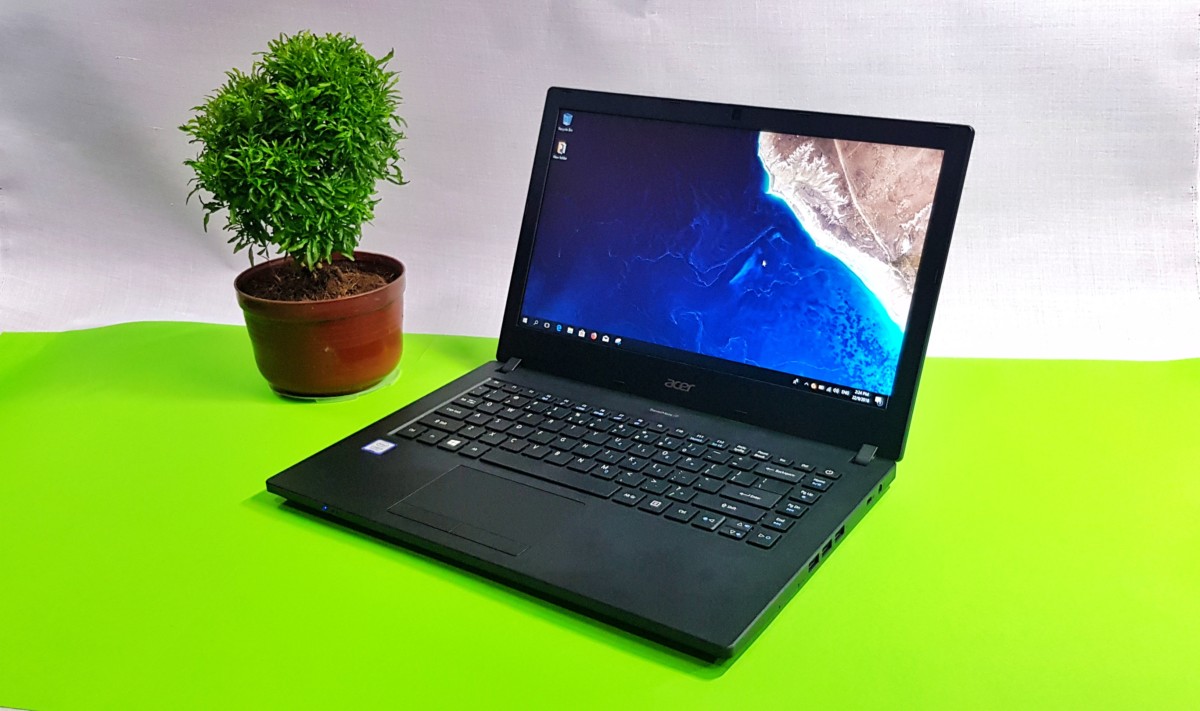 The comprehensive selection of ports on the TravelMate P2410 covers almost all eventualities you’d expect in a work-related environment, which is gratifying indeed rather than having to tote around a bag full of dongles. The only quibble here is that the ports are all tightly clustered together which means plugging in peripherals, cables and whatnot may be a bit of a challenge though it’s not an insurmountable problem.

The base of the TravelMate P2410 is a nondescript slab of black plastic save for several very interesting concessions to practicality. To allow for easy access to the RAM and storage, Acer have implemented two access ports, sealed by normal Philips type screws which makes upgrading it less of a bother. The base also has two forward facing, downward-firing oriented speakers. The top lid of the TraveMate is similarly bereft of ornamentation save for a simple Acer logo emblazoned in the corner.

Flipping the lid open reveals the 14-inch matte HD resolution display framed by fairly thick bezels and an island-style keyboard. The hinges themselves are fortunately as sturdy as the rest of the laptop and have no wobble nor creaking when deployed and are smooth enough to open one-handed.

They also allow the display to fold all the way down flat should the need present itself. While the top lid is somewhat chunky with the aforementioned thick bezels, it’s also, like the rest of the laptop, very well built and has no bend or flex when held.

At first blush, the keyboard of the TravelMate P2410 looks fairly well appointed though it lacks a dedicated numeric keypad and is not backlit, which may make using it in dim scenarios a bit of a pickle. That aside, it also reassigns the brightness and volume controls as overlays on the direction pad in the lower right of the keyboard which is a welcome concession to ergonomics. The generously sized touchpad itself also sports a matte finish like the rest of the laptop along with two pleasantly clicky buttons.

The TravelMate P2410 isn’t going to win awards for good looks or flash but where it does score is its practical, sturdy design that makes it ideal for business users and for work on the road where a sturdier, lower-profile design comes in much handier than something made of glass or thin metal that will prang at the first inopportune moment.

On the hardware front, the TravelMate P2410 has been kitted out primarily as a business-oriented productivity laptop. The 14-inch HD resolution display is serviceable for spreadsheets, Word documents and the like while the rest of the hardware is made up of a current-gen Intel Core i5-8250U processor, 4GB RAM and a 1 terabyte hard disk running Windows 10 Pro. The laptop lacks a graphics card and instead relies on Intel UHD 620 graphics.

In its stock configuration, the Travelmate P2410 does well in its chosen task of crunching paperwork, word processing and the like though anything beyond the most casual gaming or something else more taxing than that like rendering video may prove a daunting prospect. Fortunately, the touchpad and keyboard are competently made and responsive. Its generous array of ports also means that you’re covered when you need to hook it up to whatever projector or monitor for presentations and the like.

In terms of synthetic benchmarks, it scored a fair 2,420 points in PCMark which tests its capabilities in a work environment, marking it out as a competent unit for productivity purposes.

The modest nature of its hardware and lack of a dedicated GPU on the TravelMate P2410 predicates it purely as a productivity device and its scores in 3DMark reflect that somewhat as it scored a fairly decent 3,830 points in Sky Diver but was unable to run any permutations of Time Spy and only managed to run Fire Strike with a somewhat middling 849 points while FireStrike Ultra scored a somewhat low 215 points. In Cinebench R15, it got an OpenGL score of 34.86fps and 522 cb for the CPU. 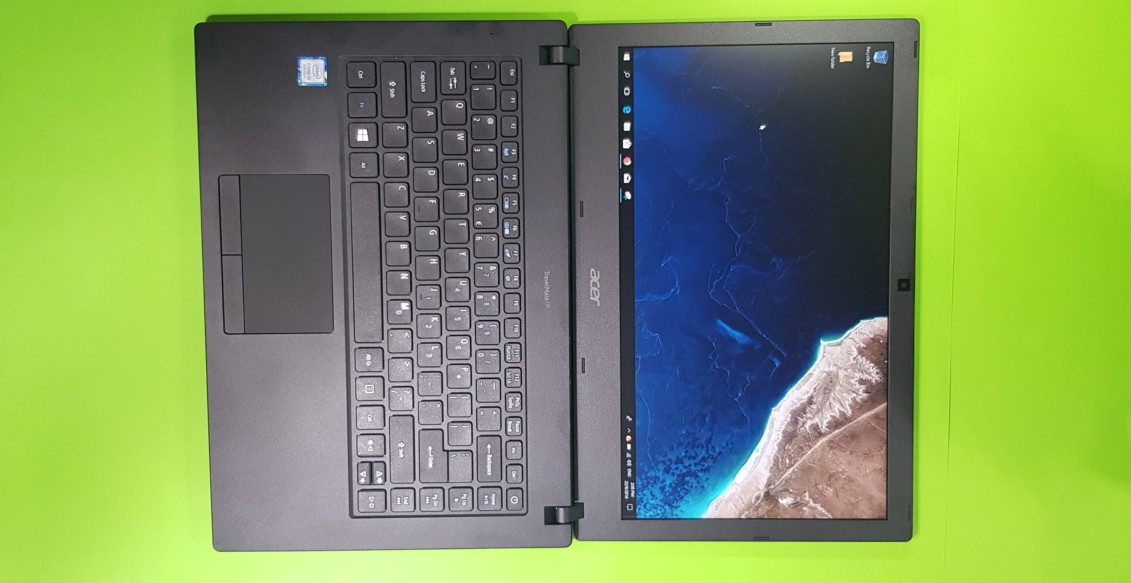 When you’re off the clock, it’s a fair hand at watching streamed video though the panel on offer has fairly modest colour rendition which makes hues seem a bit washed out. Visibility under sunlight is fair but unremarkable which means you’ll get best results watching it indoors.

Fortunately, text  on the display is still very legible and it’s more than capable of running through an episode of Westworld without you having to peer at every scene wondering what happened. Of particular note is that its stereo speakers are surprisingly clear and loud though the nature of its design means that you’ll get best results if you place it on a hard, flat surface where the sound can bounce off it. This makes it an even more tempting proposition for casual movie watching or, more likely, presentations on the go.


With a normal workload that involved WiFi constantly switched on, a dozen open browser windows with MS Office as well as Excel in the background along with modest screen brightness, it was able to last a good seven or so hours. Charging it from a completely drained state will need about two plus hours to get it to a full bar which is a fair if unremarkable duration.

As it stands, the TravelMate P2410 isn’t the cheapest productivity rig around nor is it the best looking but it combines a well considered blend of features optimised for serious work into an office-friendly and portable form factor. It excels in its chosen role with a generous host of ports that covers all the bases, a solid keyboard and decent battery life with enough hardware to get the job done; qualities that will endear it to mobile workers and IT procurement officers alike.

In its intended role as a productivity rig, the TravelMate delivers in a very competent fashion. The sturdy build quality, plethora of ports and productivity-oriented specifications allows you to reliably get work done on the go and, if needed allow you to port it to a larger display for presentations and the like without fuss. Its decent endurance also means that it makes for a sound choice to lug around for road warriors.