HONOR has developed quite a reputation for making seriously outstanding phones that not only offer exceptional performance but amazing bang for the buck as well. Their latest phone, the HONOR View20 that was launched in a suitably grand fashion several weeks ago in Paris embodies this ethos by offering performance that can go toe to toe with any of the latest generation flagship phones in the market at an agreeably lower price tag to boot.

While you’d reckon that it’d cost a bomb, the HONOR View20 proves to be surprisingly fairly priced. We’re looking at a 6.4-inch punch-hole display that almost stretches from edge to edge, the latest powerhouse Kirin 980 processor and a potent rear camera that bears the world’s first 48-MP sensor and an Ultra Clarity feature to capture huge and detailed snaps including 4K video too

The fact that it costs a hefty chunk less than the market’s leading flagship phones without compromising its performance  is what makes the HONOR View20 so desirable. Here’s six sensational reasons why the HONOR View20 is one of the most powerful phones in its price range that you need to snag right this very minute…

The next time you’re on holiday, you can ditch the camera and bring just this baby along. While most phones in the HONOR View20’s modest price range compromise on imaging quality, HONOR has integrated a camera that can go toe to toe with the industry’s leading flagships while costing less to boot.

Where the HONOR View20 is a step above the competition is that it pairs this powerful camera setup with the artificial intelligence (AI) that is hosted off the Kirin 980’s integrated dual neural processing unit (NPU).

The HONOR View20’s rear camera can take advantage of this AI to intelligently select the best settings based on your subject, automatically correcting and optimising pictures for best results.

This is especially evident when taking night shots which come up crisp and clear even when taken under challenging conditions like after dusk or in dimly lit scenarios with the HONOR View20’s Artificial Image Stabilisation (AIS) Night Shot mode.

But wait, it gets better as the AI is able to take advantage of the camera’s huge 48-MP sensor by taking multiple 48-MP shots and then combining the best details of each to create a single, huge 48-MP photo brimming with detail and luscious hues in its AI Ultra Clarity Mode.

It takes a bit of time – 4 seconds to be precise – to capture a shot in AI Ultra Clarity Mode but the results, especially for scenery and other shots needing scads of detail are well worth it as it offers exceptional creative options and room for a lot of cropping if needed such as this daytime shot taken at KLCC. The View20’s AI Ultra Clarity Mode lets you literally count every window in the building on the distant horizon. 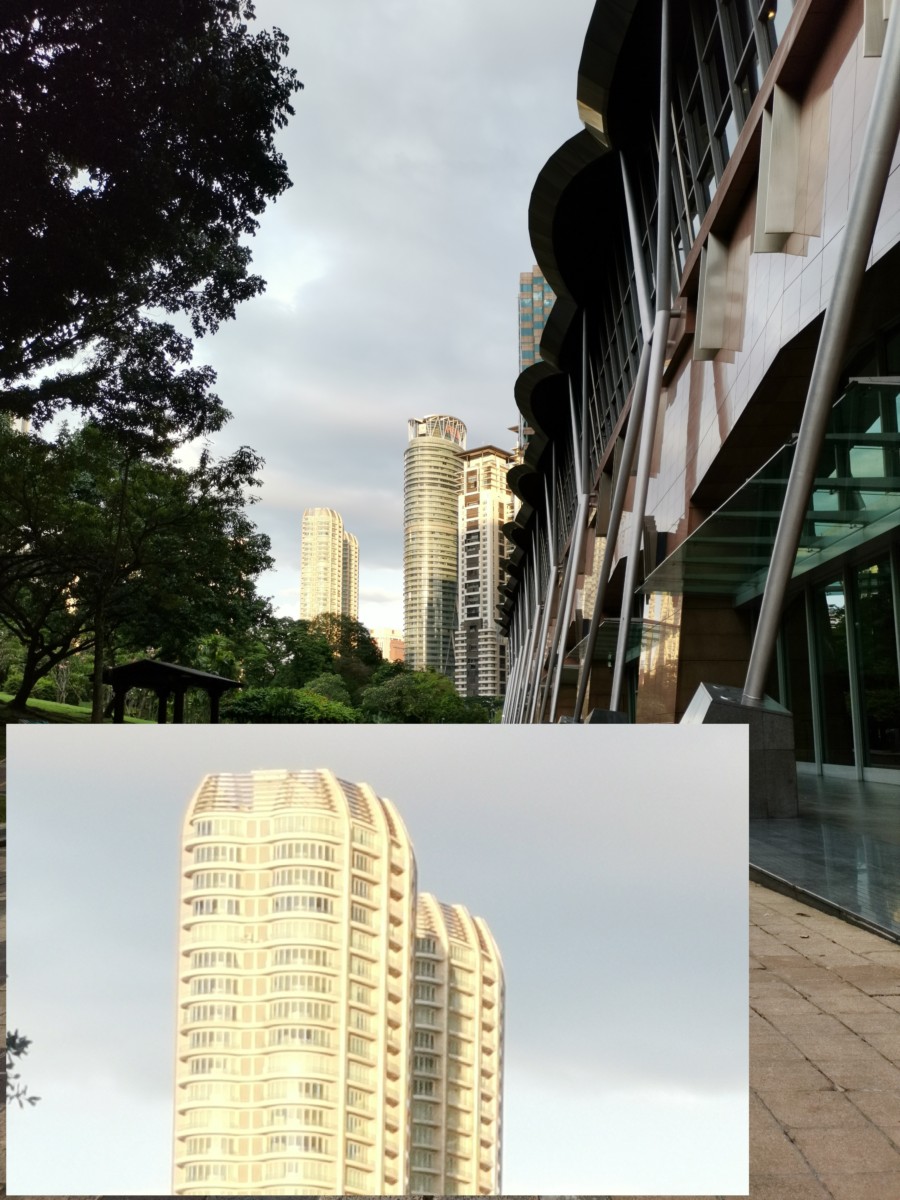 The HONOR View20 is easily one of the most powerful phones in its price range. For RM1,999, it comes with the latest Kirin 980 7nm octacore processor that integrates eight cortex-A76 cores and a dual Neural Processing Unit (NPU) to offer exceptional power and performance on top of cutting edge artificial intelligence to offer better quality camera images and better overall phone performance. The Kirin 980 is the very same high-powered chip running on the Huawei Mate 20 series phones. 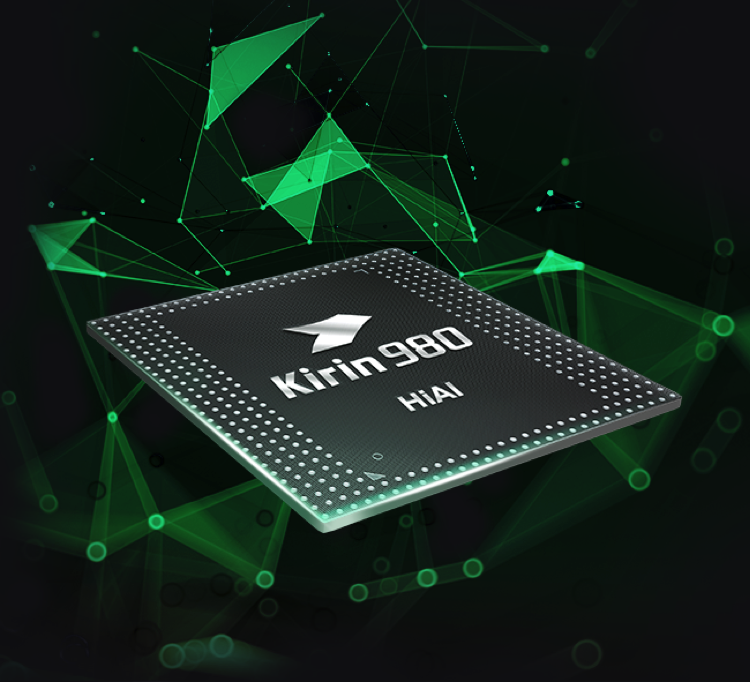 Compared to its predecessor the Kirin 970, the Kirin 980 has 40% more power efficiency and 20% better performance. More importantly, the dual NPU tackles a number of critical tasks, helping you quietly and efficiently manage resources on the phone in the background for better performance and longer battery life.

Paired with the powerful Kirin 980 processor is a generous 6GB RAM and a whopping 128GB of onboard storage which allows for plenty of room for movies, games, pictures and more.  If you have deeper pockets, you can also opt for the HONOR View20 variant with 8GB RAM and 256GB of storage.

To keep all this powered, the HONOR View20 also packs one of the largest batteries mounted in a smartphone with a humongous 4,000 mAh capacity that can offer all-day battery life. That is considered exceptional for a phone that’s price below RM2,000 if you ask us.

One of the biggest challenges in smartphone design is cramming in as much screen real estate as possible without compromising structural integrity or aesthetics which is the subject of countless late nights for your average smartphone engineer. Rather than cramming in a ghastly looking notch, the HONOR View20 instead uses an ultra-compact punch-hole display with its 25-MP selfie camera located under the glass with a tiny hole just 4.5mm in diameter in the corner.

This allows the phone to cram in a 6.4-inch, 2,310 x 1080 pixel display with a chart-topping 91.8% screen-to-body ratio and a 19.5:9 aspect ratio which allows for a vivid cinematic viewing experience when you’re streaming movies and, of course, mobile gaming which is something that the HONOR View20 can accomplish with deft aplomb.

As any seasoned mobile gamer will know, playing games on a phone is a hot experience, literally so. All that pixel crunching in high performance games like PUBG and Fortnite tends to redline a processor and vent out a ton of heat which can lead to a phone becoming uncomfortably warm in your hands.

The HONOR View20’s hefty Kirin 980 processor sports advanced Liquid Cooling tech that vents heat away from critical areas like the processor and ensures that the phone stays cool even under intensive and sustained gaming over several hours.

Another feature that makes the HONOR View20 a superb gaming phone is its inclusion of GPU Turbo 2.0 tech, a hardware and software solution that leverages on the Kirin 980’s power to accelerate graphics for games to ensure consistently high framerates, reduced touch input latency and smooth gameplay with a selected and growing library of AAA games like PUBG, Mobile Legends: Bang Bang and Vainglory. Add in the generously sized display and you have one of the most powerful gaming phones in its price range.

Perched right next to the 48-MP rear camera is a unique 3D camera that tackles a number of duties in tandem with the primary camera and with the Kirin 980 processor.

The 3D camera is sophisticated, using infrared light to measure distances between the phone and a subject in order to measure depth data and offer accurately defocused background shots when capturing portraiture.

The data from the 3D camera also allows the HONOR View20 to perform its exceptionally novel ‘Shaping’ mode where you can dynamically make people’s silhouettes, not just their faces to look slimmer when taking full-body shots.

HONOR hasn’t skimped when it comes to aesthetics and the HONOR View20 looks as fetching as it is powerful. Bearing a distinctive mirrored gradient finish, the phone uses a refined fourth generation nano-vacuum coating and a unique aurora texturing process to create its unique finish.

When you angle the phone in certain ways to the light, you’ll also discover an interesting easter egg of sorts as the light reveals a series series of stylistic chevrons integrated into the backplate. Combined, all this creates a very distinctive design that’a surefire conversation starter the moment you brandish it. 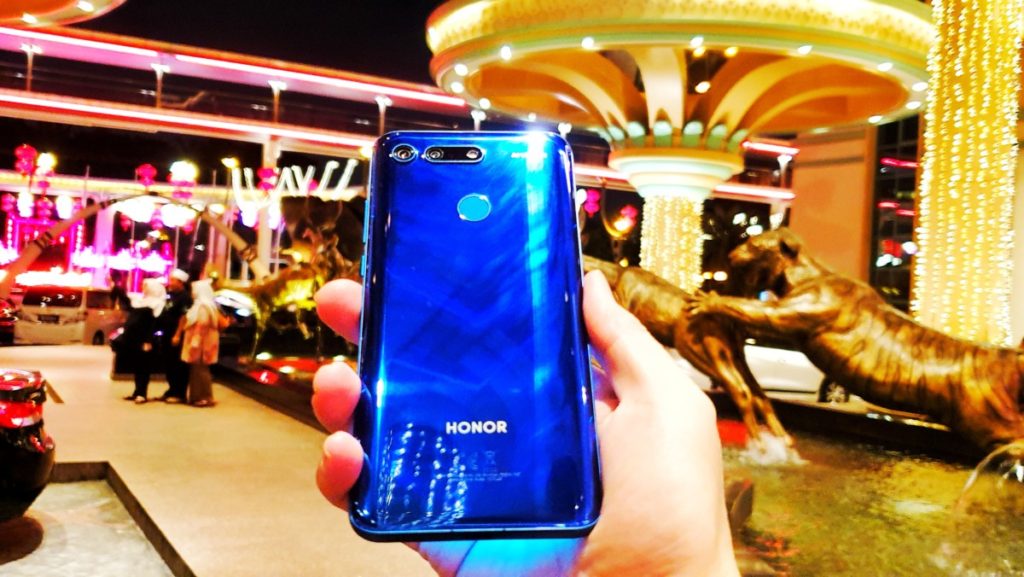 This lavish attention to detail extends even to how the HONOR View20 is built as every aspect of its glass and metal chassis has been carefully considered and designed to ensure optimum ergonomics. Despite hosting a massive 4,000mAh battery, the HONOR View20 is just 8.1mm thin while remaining very wieldable one handed.

Sweet – so where can I get the HONOR View20?

The HONOR View20 is currently available in your choice of three colours and two potential storage configurations. It can be acquired at all good retailers nationwide  as well as HONOR’s official online store at www.hihonor.com/my

Alternatively, you can purchase the HONOR View20 online at HONOR’s official store on Lazada and Shopee.

The 6GB RAM/128GB storage version is available in Midnight Black or Sapphire Blue for RM1,999 while the 8GB RAM/256GB version that is co-designed with Moschino comes in a shade of Phantom Blue for RM2,499.