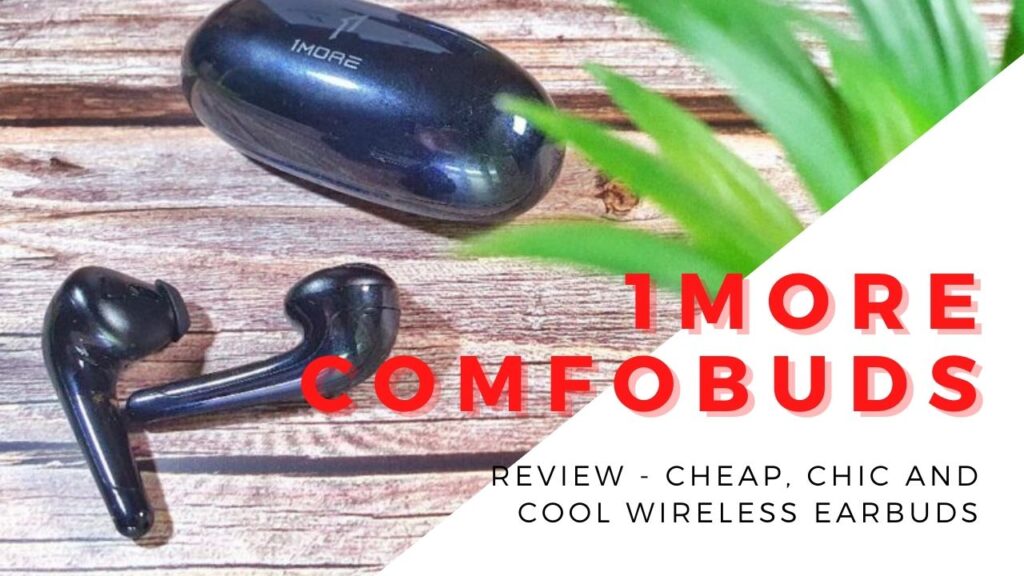 Newcomer 1More has just hit the market with a slew of designs and we had the opportunity to take a closer look at their eponymously named 1More ComfoBuds. With an affordable RM189 price point and a rather familiar design that riffs off the AirPods, do the 1More ComfoBuds live up to their price tag? Check out our review and find out more.

As a newcomer to the market, the 1More brand is somewhat of a dark horse seeing its pedigree but it’s also a good thing as it allows for its offerings to be judged on their own merit rather than being weighed down by expectations.

In terms of box contents, you’re getting the essentials here. On top of the obligatory charging cable and instruction manual, you also get the ComfoBuds themselves. Basically, you get this: 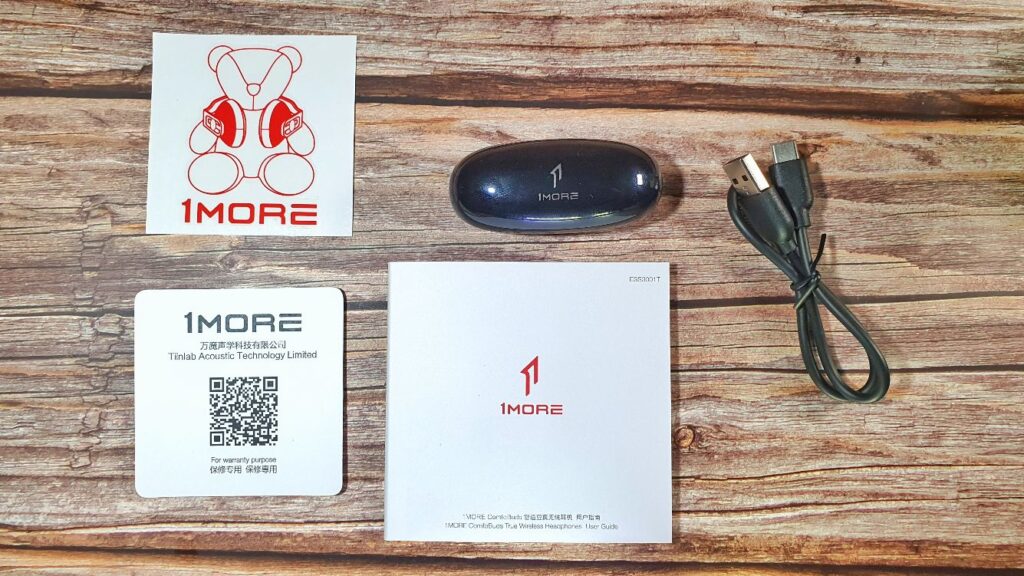 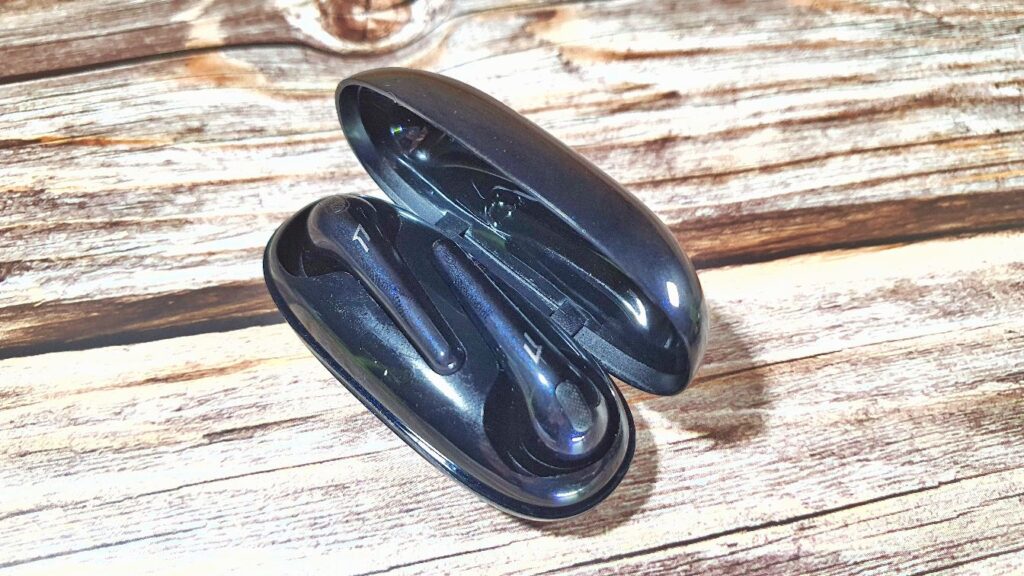 The 1More ComfoBuds is an intriguing blend of proven design concepts with a few unorthodox aesthetic twists thrown in for good measure. The earbuds themselves are done up in a homage to Apple’s AirPods which means you get a long extended design that resembles a stylised toothbrush.

Much like the AirPod, the ComfoBuds are a semi in-ear design that eschews silicone ear tips and which perches in the outer ear canal. In order to stay secure in your ear,  the Comfobuds have what can be described as a stylised wing tip of sorts that provides a modicum of friction. These wingtips are non-removable nor do they issue any additional accessories to customise the fit. 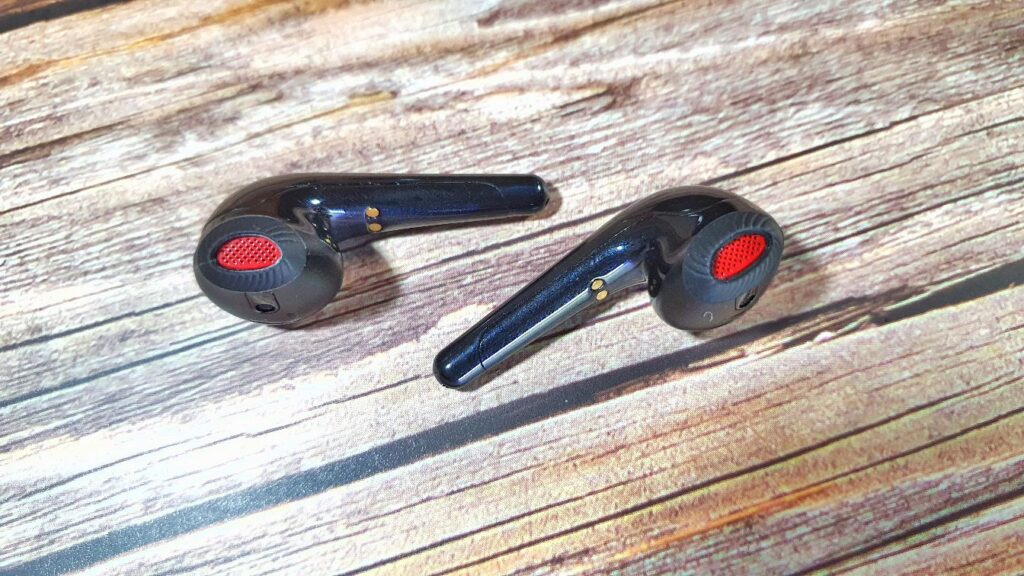 Each earbud houses a 13.4mm driver which is somewhat larger than what is typically mounted in TWS earbuds in this price range, has a touch control panel that responds to taps just at the neck of the ‘tube’ and a pair of environmental noise control microphones to control external ambient sound when you are making phone calls.

The nature of the earbud’s design also means that it has no passive noise insulation as it lacks ear tips and the design also lacks active noise cancellation. On the bright side, they’re rated IPX5 for water and sweat resistance so they can survive a light splash or two.

Where the 1More ComfoBuds alter the script substantially is in the design of their charging case. From the outside, it looks like an incredibly compact lipstick case that hinges open to reveal two recessed bays for the earbuds.

The rear of the case hosts a USB Type-C port and the earbuds don’t support wireless charging. To date, this is the most compact charging case that we’ve seen in the market and it’s also one of the lightest too with each earbud weighing just 3.8g while the case itself is a mere 28.9g. 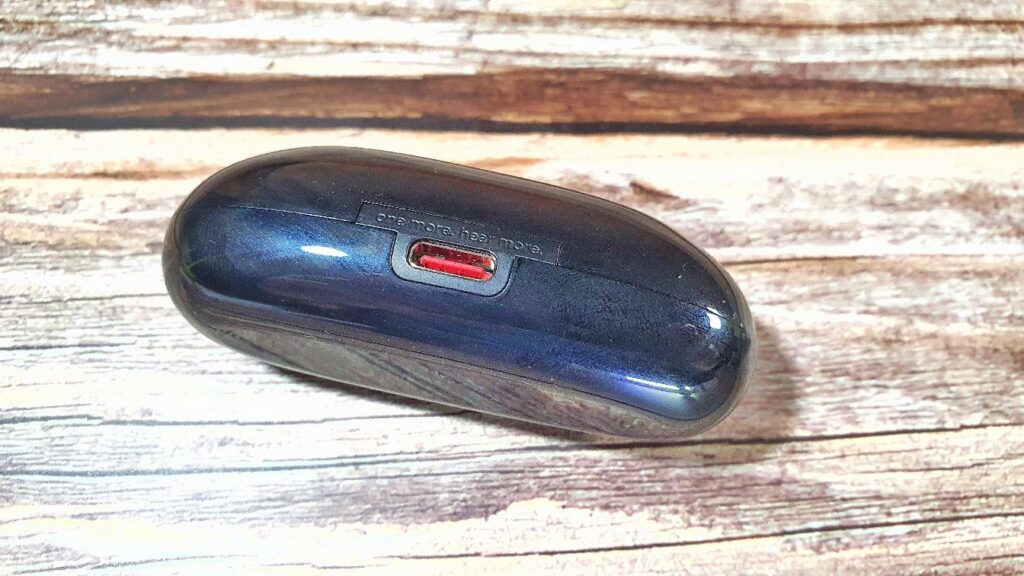 Unfortunately, it’s also slippery on account of its shiny finish and is difficult to open one-handed. The earbuds also need instructions on how to remove them from the case itself.

Rather than simply fishing them out, you need to nudge the ear piece and pinch it with your thumb and forefinger. It’s not immediately intuitive but it’s something you can pick up after a few tries.

The 1More ComfoBuds come with Bluetooth 5.0 support and paired up swiftly with our PC and several examples of Android phones like the Mate30 Pro, the Galaxy S20 Plus and the Galaxy Note10. Like many other mainstream earbuds, the ComfoBuds also come with an attendant free downloadable app called 1More Music for both the Google Play Store and the Apple app store.

The earbuds are able to function independent of the app but you’ll need the app if you want to perform firmware updates and to swap what limited controls it has available.

Controls save for volume are mirrored across both earbuds and both are able to function independently of each other. By default, if you tap either earbud twice, you can play or pause tracks and take calls. If you tap the left earbud thrice, you reduce the volume while tapping the right increases volume. Alternatively, you can assign any of the double or triple taps to summon a digital assistant or wind back/forward a track.

Unfortunately, there are no equaliser settings available on the ComfoBuds so you’ll have to stick with what they have available though on the bright side, the earbuds are tuned by the famous sound engineer Luca Bignardi who has a substantial resume of acoustic accomplishments indeed.

How do the 1More ComfoBuds sound?

Without prior experience with 1More products, I tested it with an open mind (and ears) to discover just what its ‘signature’ sound is like.

Initially, we put it through a standard work from home scenario which involves pairing up with a laptop and a phone. Like many other entry-level earbuds, there’s no multipoint pairing and you have to unpair and pair it to swap between devices. 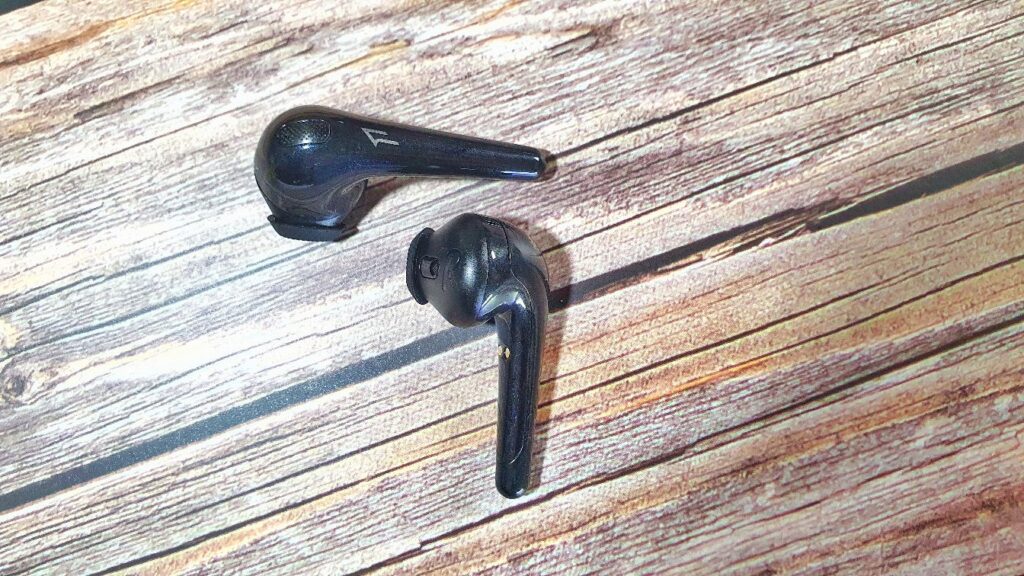 When going through several live streams, Zoom presentations and voice calls, the earbuds offered good clarity for vocals on both sides of the divide. My voice sounded clear and audible without significant background noise even with the sound of heavy traffic outside during what passes for rush hour in the neighbourhood.

On the gaming front, the earbuds were serviceable with fair sound staging though there was a slight lag especially if you’re emptying a magazine on full auto with the report only appearing half a second or so later. Seeing as the ComfoBuds aren’t intended for gaming in the first place, it’s not a major quibble.

Where the 1More ComfoBuds excels is on the music front, offering generally balanced sound without drowning out one aspect over another tending towards the warm end of the spectrum with a modest soundstage.

There’s good left/right staging and fair instrument separation though the sound stage doesn’t feel as spacious as other competing earbuds that we’ve tested. Taylor Swift’s ‘Wildest Dreams’ starts out with a massive bass kick but it feels a bit muted here though the highs and mids mid-track were handled in a competent fashion. Hans Zimmer’s Time track used in Inception seemed to lack conviction and punch. It’s there but it lacks acoustic oomph.

Pink Floyd’s signature track ‘Time’ with its demanding sound staging in the first minute was handled well with each chime and alarm sounding relatively crisp and distinct. As a lark, we played a few tracks from Lenka and Aqua and sampled tracks sounded just fine.

This lends it more towards usage in more contemporary music and movies. The earbuds were also able to handle high volumes without distortion. One quibble though is the lack of passive noise insulation so that people near you will be able to distinctly listen to what you’re playing.

Battery life was fair if unexceptional with a single charge lasting 3 hours and 45 minutes after being paired with a PC for some Facebook video calls and Spotify running in the background. This is close to its quoted original limit of 4 hours per charge. The results when paired with a phone were similar when subjected to extended Spotify, Netflix and gaming. 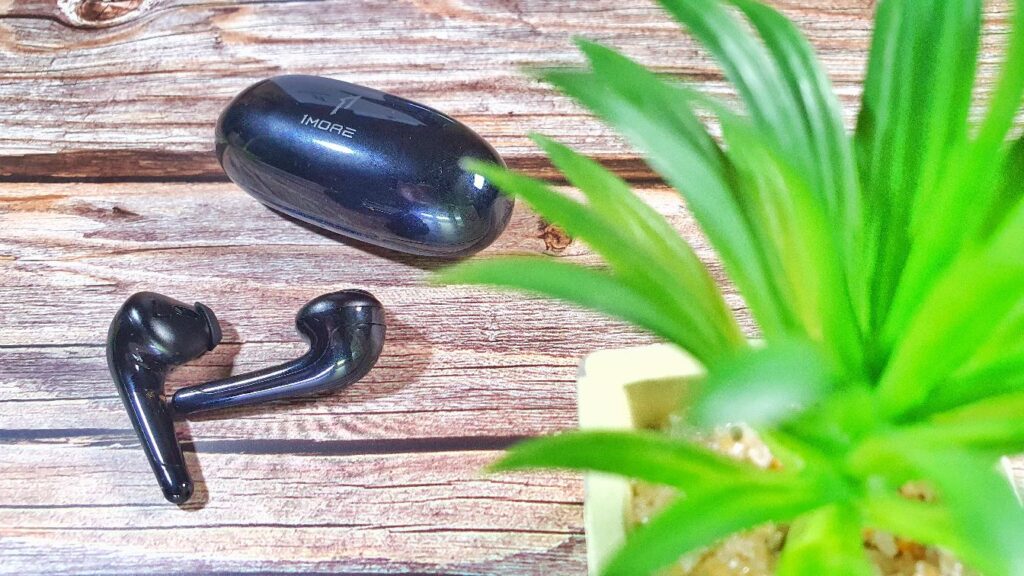 The provided charging case adds an additional 14 hours or so for a theoretical maximum of 18 hours of battery life. There are certainly earbuds with more battery life but what it has isn’t too shabby either. Charging it to full takes about an hour and 30 minutes.

In terms of comfort, the ComfoBuds exemplify their name and despite their lack of ear tips, they were able to be worn without issue in four-hour stretches before they ran out of juice. They also proved to be remarkably secure as well and stayed in my ear even after attempting to shake it loose in an attempt an 80’s thrash metal rocker would approve of.

Should you buy the 1More ComfoBuds?

If you’re looking for a cheaper design, you can opt for the UGreen HiTune WS100 TWS earbuds but you get 5.8mm drivers that are much smaller than what’s used in the ComfoBuds while getting a cheaper RM146 price tag along with a traditional silicone ear-tipped design and longer battery life. If you’re looking for something that’s about the same price point with slightly larger drivers, a traditional silicone ear tipped design and longer battery life, you can try the Edifier TWS1.

The 1More ComfoBuds are great as an affordable general purpose work from home design where its decent acoustic performance to price ratio and its ability to be worn in a reasonably comfortable fashion for several hours at a time outweigh its middling battery life and lack of passive noise insulation.

The 1More ComfoBuds are great as an affordable general purpose work from home pair of wireless earbuds where its decent acoustic performance to price ratio and its ability to be worn in a reasonably comfortable fashion for several hours at a time outweigh its middling battery life and lack of passive noise insulation.

No equalizer settings in app